Recurrent oil leaks sighted off the coast of Indonesia

Is the oil seeping from a shipwreck or a natural underground reservoir? While investigations are underway by the Indonesian coastguard, the Spanish company that used satellite technology to identify the spill says the practice of ships dumping oil in the area is a daily occurrence.

An oil spill has been spotted off the coast of Indonesia.

The leaks were first sighted near the coast of Idy Rayeuk, a city in Aceh, North Sumatra, on 30 November 2019, and were seen repeatedly from the same location up until 26 February.

Indonesia’s coastguard, which claimed to have no knowledge of the spill, has been alerted to the leaks by Eco-Business and the matter is under investigation.

Images of the leaks were picked up by satellite by Orbital EOS, a Spanish company that specialises in detecting and analysing oil spills.

A time-stamped video compiled by Orbital EOS and shared with Eco-Business shows the oil leaks over time, clearly coming from the same location, with the oil often drifting towards the coast.

As the leaks come from the same location, they are believed to either be from a shipwreck or a natural underground oil reservoir.

“The shape of the spill gives you clues of the source. In this case, it’s clear that it’s coming from the bottom of the sea, not a [sailing] ship,” said the chief executive of Orbital EOS, Juan Peña Ibañez, who has 11 years of experience in maritime surveillance and airborne remote sensing.

Ibañez noted that the case is unique in that the recurrent leaks come from the same point and are so close to shore.

Oil spills devastate marine ecosystems, damaging the feathers of birds, the digestive systems of fish, and the coral, algae and sea grass on which sea life depends.

They are also expensive. BP’s Deepwater Horizon spill in 2010 has cost, so far, including legal fees, US$65 billion to clean up.

In this case, shipping is probably not to blame

“What we do usually detects bilge dumping, which unfortunately is a very common practice in this part of the world,” Ibañez said.

Bilge dumping is the disposal of waste water from a ship’s lower hull into the sea.

A ship’s waste water is supposed to be treated before it’s discharged into the water, but often ships bypass pollution controls and flush oily, untreated sludge into the ocean—in violation of marine pollution law.

Ibañez said that the problem is common in Indonesia and Malaysia, while a regular sailor in these countries’ waters told Eco-Business that ships often dump waste water before docking in Singapore, where they have to pay for waste water to be treated. 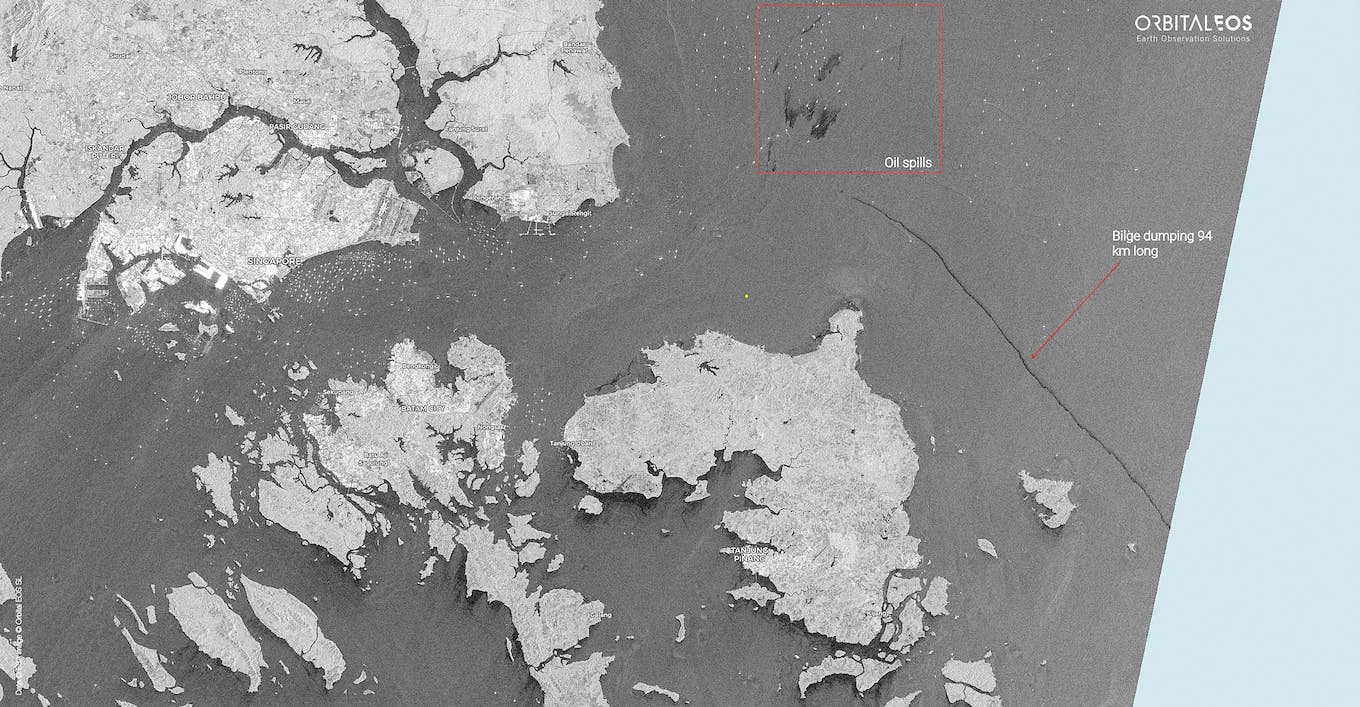 A satellite image shows a stretch of pollution from bilge dumping 94 kilometres long off the coast of Bintan Island, Indonesia. Image: Orbital EOS

“We have spotted many cases of bilge dumping close to Sumatra and Java—typically every day. But this recurrent oil spill is very rare,” Ibañez said.

“The problem in this region is that there’s a very high density of [shipping] traffic, and there’s no official surveillance [to detect bilge dumping],” he said.

He noted that the cost of specialised aircraft to monitor the sea in Spain is up to €5,000 (US$5,442) per flight hour. “Not every country can afford this kind of surveillance,” he said.

Ibañez posted a satellite image of the oil leak on LinkedIn last week that asked “anyone with contacts with the Indonesian coastguard?”