Analysts believe that higher carbon charges mean future clean energy imports and nascent technology could be more price-competitive. They are also keeping an eye on the fine print for emissions allowances and offsets.

In 2015, seven years after the Canadian state of British Columbia enacted North America’s first carbon tax, a stocktake found that emissions had dropped by 10 to 15 per cent. The price of carbon rose from about US$7.90 to US$23.50 during that period.

It may be a tough ask for Singapore to emulate the pace of British Columbia’s emission cuts in seven years, despite the latest announcements that Singapore will hike its carbon price up to US$18.60 a tonne in 2024, US$33.40 in 2026 and possibly close to US$60 by 2030. The city-state currently charges US$3.70 a tonne.

National emissions will only peak by 2030 according to Singapore’s own assessment.

British Columbia produces around 90 per cent of its electricity from carbon-light hydropower, giving firms and residents an abundant clean energy source to turn to.

Meanwhile, Singapore’s share of domestic solar power, its primary source of renewable energy, will hit about 4 per cent by 2030. Producing other forms of clean energy at home is next to impossible because of Singapore’s small size and unique geography.

The Singapore government is mulling the use of low-carbon hydrogen and carbon capture technologies, but these technologies are still being developed and are currently not commercially viable.

“No question that there are limitations in that sense,” Thomas said. But he believes that there is still a place and role for higher carbon prices today, as revenue could be used to spur investments in renewables.

Beyond local generation, Singapore is looking to import up to 30 per cent of its electricity from low-carbon sources from neighbouring countries by 2035. A low emissions factor of 0.15 tonnes of carbon emissions per megawatt-hour of electricity has been set, though no energy sources have been precluded apart from coal and nuclear.

He added that the higher price on fossil fuels could help Singapore realise its ambition to replace them with hydrogen energy.

“You can facilitate and encourage something to happen simply by giving the right price signals to those industries, to let them know that they have a customer base with a certain pricing mechanism that makes the production of hydrogen fuel economical,” he said.

Low-carbon ‘green’ hydrogen fuel, produced with renewable energy, costs US$3 to US$7.50 per kilogramme today, several times higher than the cost of natural gas that Singapore predominantly uses. But costs are expected to drop in the coming years with better technology and economies of scale.

There is also hydrogen produced from fossil fuels where the carbon emissions are captured, though the green credentials of this method have been called into question.

Getting the price right

Singapore’s carbon tax revisions mean that it will soon be quoting one of the highest prices for emissions in Asia. South Korea’s emissions trading scheme, the region’s most developed, ended last year with a spot price of about US$30 a tonne. 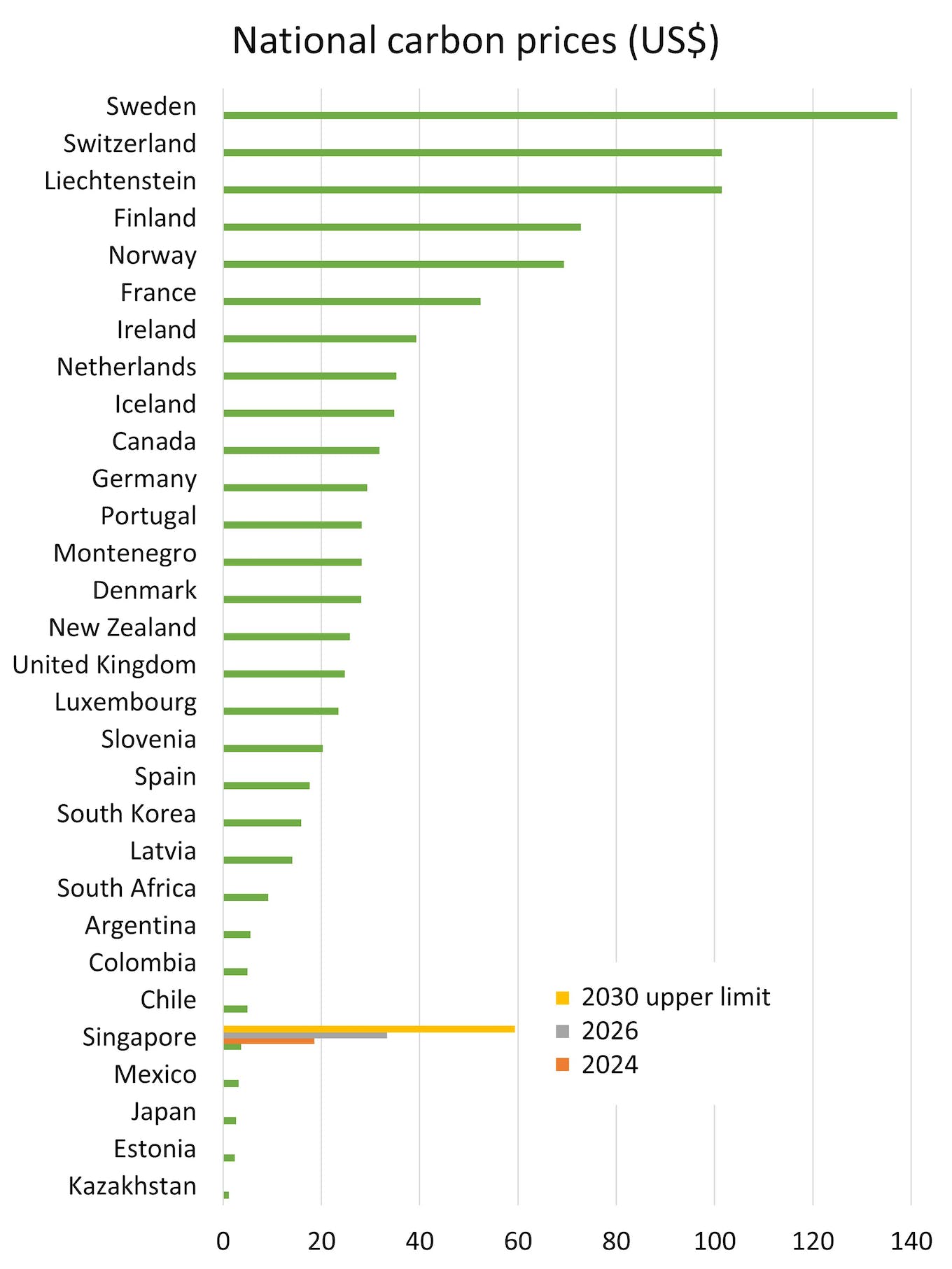 National carbon prices around the world, up till April 2021. Data: World Bank.

“There’s a really big improvement on the existing price, which is really low, at US$3.70 a tonne. It’s a significant increase that takes Singapore’s planned carbon price by 2030 to, for example, present Norway levels,” said Bill Hare, chief executive of Germany-based Climate Analytics.

The think-tank has been part of the Climate Action Tracker initiative that analyses countries’ climate plans. Last year, it rated Singapore’s commitments as “critically insufficient” in limiting climate change to 1.5 degrees Celsius.

Hare said the rating for Singapore will be reviewed based on the new announcements, which also includes a pledge to reach net-zero emissions around 2050.

“A lot of the savings on carbon footprint can be through emissions efficiency,” said Professor Benjamin Horton, director of the Earth Observatory of Singapore.

“If the tax becomes substantial, then managing directors will start to think that their companies need to understand what their carbon emissions are and use efficiency measures,” he said.

But Horton also called for tax revenue to be spent in more areas, such as climate research.

Yvonne Zhang, who leads Deloitte Risk Advisory’s sustainability and climate change practice in Southeast Asia markets, added that more money should be spent on training workers to enable a transition towards cleaner energy.

“It is not simply about investing in innovation or broad awareness-building but enabling, retraining, or upskilling mature talents with specialist skill-sets in STEM, financing, design and social sciences to contribute to solution building as soon as possible,” she said.

Along with the higher tax levels, the Singapore government is also allowing emitters to use ‘high quality’ international carbon credits to offset up to 5 per cent of their fees.

Observers said the cap was low enough to avoid over-reliance on trying to offset emissions.

“Without such caps, businesses that choose to ‘buy their way’ out of emission liabilities forgo the opportunity to develop resilience and agility needed in an uncertain, decentralised and low-carbon future,” said Zhang.

She added that the 5 per cent limit was in line with the call global carbon services group Science Based Targets Initiative made, for firms to use offsets for only 5-10 per cent of emissions in their decarbonisation plans.

The lack of firm regulation in voluntary carbon markets could also cause problems.

“Businesses will need to conduct in-depth due diligence to ensure that these projects are designed with sufficient safeguards and that they do not have adverse social and human rights impacts,” she added.

“Even if it may have some leakages that reduce the impact of the carbon tax, it is an encouragement in developing carbon markets,” said Thomas, who added that Singapore could scale up this aspect if local decarbonisation efforts face future roadblocks.

Zaman said that Singapore will likely set a high enough bar on the quality of carbon offsets, so that they could possibly be counted towards Singapore’s Paris Agreement pledges. However, it would not make sense to only allow exorbitantly-priced projects.

“In the next four years, these qualifying carbon offsets cannot be more expensive than S$25 (US$18.50). Because if they are, nobody’s going to use them. It’s a balancing act for the Singapore government,” he said.

The Bank of America estimated last year that the price of carbon offset projects ranged between US$2 and US$20 per tonne. Commodity research provider BloombergNEF projected that based on different rules, the cost could range between US$11 and US$215 in 2030.

The fine print of Singapore’s carbon tax plans will only be finalised next year, before the first price hike in 2024. Plans also include some form of free emissions allowances for firms to help them buffer against competition from regional markets without carbon pricing.

Such allowances do have precedence, such as in the European Union emissions trading market, but the level had not always been set right.

The European Court of Justice ruled in 2016 that too many allowances were handed out, amid a multi-year slump in prices to below 10 Euros (US$11.30). Adjustments have since been made and the current carbon price is close to 90 Euros (US$101).

“The devil is always in the details in these things. They can work or they can go badly wrong,” Hare said.

Meanwhile, advocacy group Singapore Climate Rally is calling for measures to reduce the size of Singapore’s petrochemical industry, and for more details on how the government will set the criteria on the use of carbon credits.