A survey of 27,000 people across 27 countries, conducted by research firm GlobeScan for sustainability reporting standards non-profit Global Reporting Initiative (GRI), found that 47 per cent of people globally agree that companies are truthful about their social and environmental performance. In 2003, just 30 per cent of people felt the same way.

Trust in sustainability reporting grew quickly from 2003 then dipped around 2008, the year of the global financial crisis. It has recovered gradually in the years since, levelling off between 2016 and 2020. This year, 37 per cent of people disagreed that companies publish sustainability information they trust, 12 per cent of them strongly so. 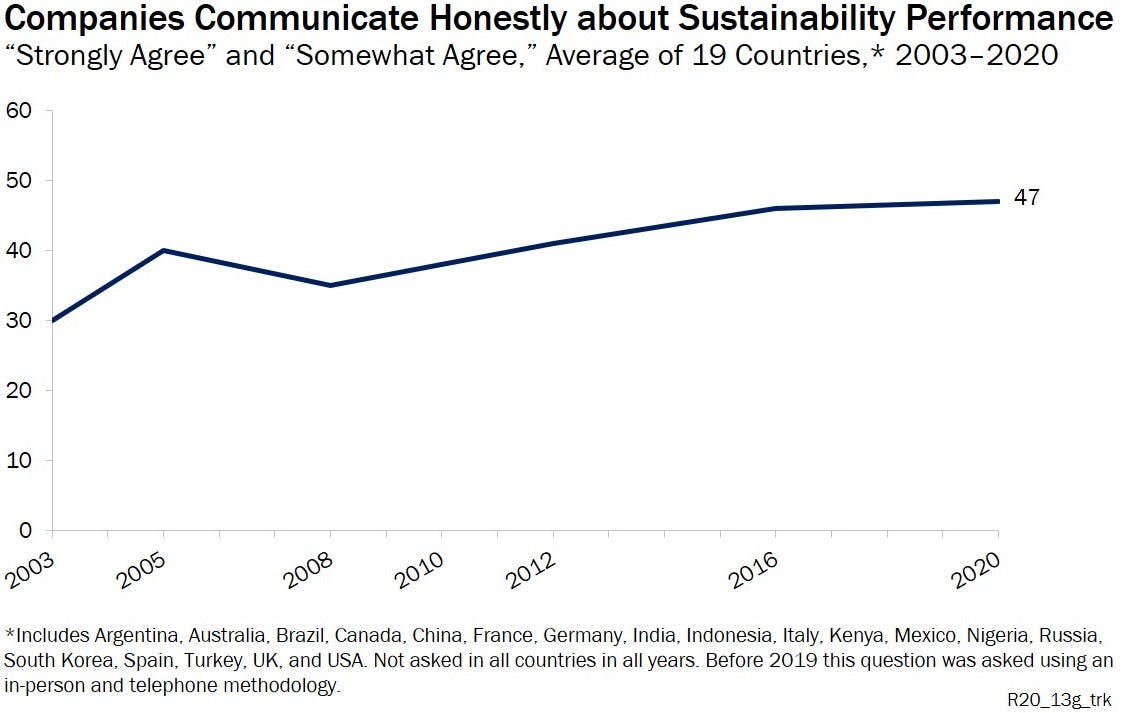 How trust in sustainability reports has changed, 2003-2020. Source: Global Reporting Initiative and GlobeScan

GRI’s chief external affairs officer, Peter Paul van de Wijs, said that the rise in trust in how companies report their impact on society and the planet goes hand in hand with growing expectations from consumers for better reporting.

John Elkington, the sustainability guru who coined the term “triple bottom line”, warned earlier this month that some sustainability reports were misleading, hard to compare, and contained greenwashing claims such as clean coal that mask “dangerous trade-offs”.

Are people in Asia not aware of how reports are often used for greenwashing, therefore trust them more? Or, are people in the West tired of bad reporting so have a lower appreciation of them?

Why do Asians trust sustainability reports more than Europeans?

Trust in sustainability reporting differs markedly by region, with Asians far more likely to believe the information provided by corporates than people in the West. Indonesians are the most trusting, with eight in 10 believing in corporate sustainability information, followed by Vietnamese, Thais, Chinese and Indians.

People in European Union (EU) countries are far more cynical, with French and Germans on the polar end of the trust spectrum. Van de Wijs said that this level of distrust supported the need for a revision of the EU non-financial reporting directive, which will push more companies to disclose environmental, social and governance (ESG) information.

Russians are the least trusting of all, with seven in 10 people not believing what is printed in sustainability reports. 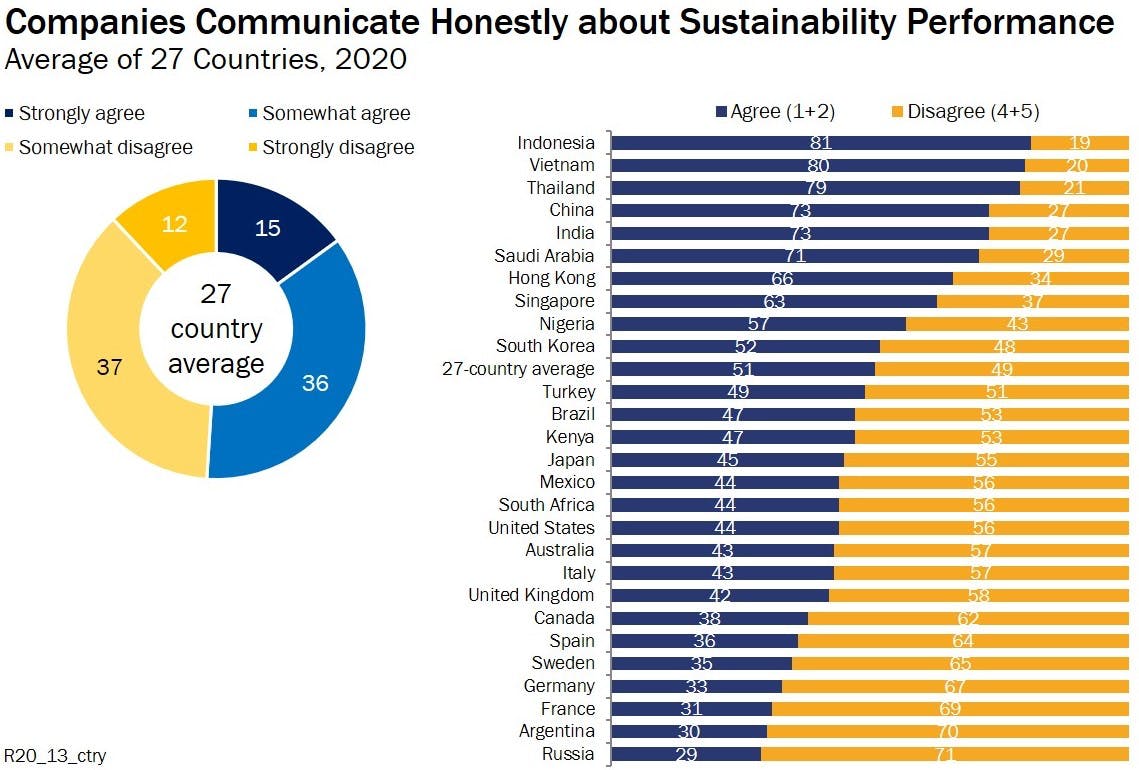 How much do people around the world trust sustainability reports? 2020 data from 27 countries. Source: GRI/GlobeScan

The high level of trust in Asia could be explained by the increasing number of markets that have policies that recommend or require ESG reporting, said Van de Wijs. In the last few years, all the major Asian stock exchanges have implemented ESG reporting as a listing requirement, adding new pressure for corporate transparency in the region.

John Pabon, founder and chief advisor at Melbourne-based sustainability consultancy Fulcrum Strategic Advisors, said that trust levels could be higher in Asia because sustainability reporting is newer in this region: “Are people in Asia not aware of how reports are often used for greenwashing, therefore trust them more? Or, are people in the West tired of bad reporting so have a lower appreciation of them?”

Thomas Milburn, Southeast Asia director of sustainability consultancy Corporate Citizenship, noted that the same regional differences in trust were reflected in other surveys. In the 2020 Edelman Trust Barometer, Asian countries showed much more faith in business, government, the media and non-governmental organisations than Western countries. Russia also ranked bottom of this study.

Milburn said that before the Covid-19 pandemic, Asia was still seeing double-digit growth and business was seen in a positive light by society. “Europe and the US have seen less economic growth in recent years, but also there is a more sceptical view of business as a result of various scandals, environmental disasters and growing inequality,” he said.