Campaigners from Extinction Rebellion dumped a truckload of manure outside News Corp offices on Wednesday to protest against the media company's coverage of climate change and Australia's bushfires.

Campaigners from climate activist group Extinction Rebellion (XR) unloaded a truckful of manure outside the Queensland office of News Corp on Wednesday morning to protest against the media giant’s coverage of climate change.

A banner was placed next to the dung heap that read: “Billionaire liars. Media monopoly. Climate denial. We call bullshit.”

Three XR activists glued themselves to the floor outside the front of News Corp’s building in Bowen Hills, Brisbane.

The protesters say that the US$9 billion company, which publishes newspapers including The Australian, Herald Sun, and The Daily Telegraph in Australia, has misrepresented the facts about climate change and is pushing “a conservative anti-science agenda”.

They pointed to the resignation of a senior News Corp executive earlier this month, who accused the company of “dangerous” and “irresponsible” coverage of Australia’s devastating bushfires.

[Rupert] Murdoch will be dead by the time the climate crisis hits hardest, but the lies will continue to affect us all.

Instead of linking the fires, which have killed 29 people and an estimated 1.25 billion animals, to climate change, News Corp outlets were accused of focusing on arson as their cause.

News Corp, which also owns The Sun and The Times newspapers in the United Kingdom, Wall Street Journal in the United States, and a number of international TV channels, later came under fire from James Murdoch, son of executive chairman Rupert Murdoch, who criticised the company’s bushfire coverage as “frustrating” and lamented the firm’s “ongoing denial” of climate change.

Rupert Murdoch said that “there are no climate change deniers” at his company when asked about News Corp’s stance on climate change at an annual general meeting in November 2019, and has stressed his firm’s own efforts to reduce its carbon footprint.

But critics have pointed to his company’s continued support and promotion of climate denying voices such as Andrew Bolt, Peter Ridd and Chris Kenny as evidence of News Corp’s climate denialism. 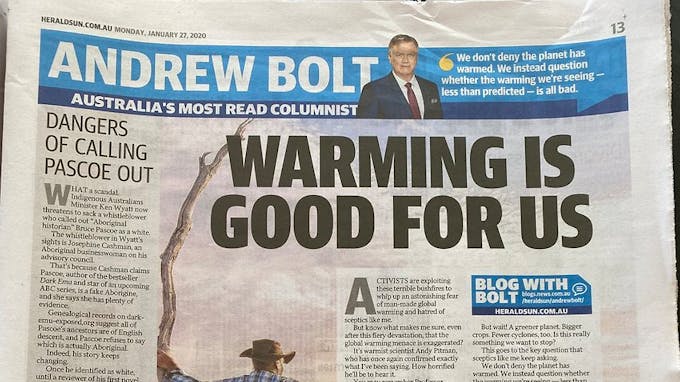 An opinion piece headlined ‘Warming is good for us’ by climate sceptic Andrew Bolt in News Corp publication Herald Sun on 27 January 2020.

In its coverage of the bushfires, The Australian newspaper ran an opinion piece this month that decried “climate alarmists” and concluded that “bushfires have been around forever so it is ridiculous to claim they are a consequence of global warming.”

Another opinion editorial in the same newspaper concluded that “fires aren’t the end of the world,” and accused those worried about climate change as suffering from “apocalyptic thinking without a real apocalypse.”

A 29-year-old XR protester going only by the name Matt, said that the company had deliberately misled readers in its climate coverage “to put more money in the pockets of billionaires and ensure that they keep their capitalist power structure.”

“It’s bullshit. [Rupert] Murdoch will be dead by the time the climate crisis hits hardest, but the lies will continue to affect us all,” he said.

News Corp owns or controls an estimated 60 per cent of Australia’s media outlets, and XR campaigners say that there is a “violent link” between media, government and business that is holding back meaningful climate action in Australia.

Extinction Rebellion is a civil disobedience movement that started in the UK in October 2018, and has since spread to more than 50 countries globally, including India, Japan and New Zealand. The group is demanding a stronger response to what it calls “the global climate and ecological emergency.”