The private sector will have a central role to play in the global development agenda going forward and must prioritise inclusive growth, says UN ESCAP executive secretary Shamshad Akhtar.

For more than three decades, Shamshad Akhtar, executive secretary of the United Nations Economic and Social Commission for Asia and the Pacific (ESCAP), has been an instrumental figure in helping multilateral development banks weather global upheavals such as the 1997Asian Financial Crisis and the 2010 Arab Spring revolutions.

Today, as the head of the UN agency for economic and social development in Asia Pacific, Akhtar brings her economic expertise to the organisation’s work on a wide range of issues such as natural disasters, income and gender inequality, and sustainable development in the region.

Even as Asia Pacific strives for prosperity, inequality poses a threat to the region’s economic dynamism, says Akhtar, who identifies reducing inequality and eliminating extreme poverty as key to the region’s sustainable future. The private sector has the power and potential to lift people out of poverty and income deprivation, and can take steps such as impact investing, creating job opportunities, and offering social protection and benefits to do so, she adds.

Akhtar, a Pakistani, previously held leadership positions in the Asian Development Bank and the World Bank, and was also the first woman to serve as the governor of the Central Bank of Pakistan in 2006. Recognised by the Asian Wall Street Journal as one of the top 10professional women in Asia in 2008, she took the reins at ESCAP in December 2013.

Firstly, the protracted nature of the global financial crisis has created substantial uncertainty for business and global recovery has been uneven. The Asia-Pacific region has shown good resilience and withstood the crisis quite well, but private sector trade prospects have been affected by weak external demand.

Continued efforts to revive the economy through a combination of monetary and fiscal policies need to be accompanied by broad structural reforms to encourage businesses to operate more efficiently. Business nonetheless benefited from intra-regional trade, which has been fairly high in Asia and the Pacific.

In addition, in 2014, the United Nations system and member states focused on tackling the challenges of climate change, with the foundations for a new deal emerging from the Lima Conference.

The initiatives and policies that resulted from the UN’s work on climate change have begun to change how business operates, and require real private sector support to succeed. There is a growing understanding that we cannot eliminate poverty and build sustainable economies without strengthening climate resilience and ensuring cleaner, safer patterns of consumption and production.

Lastly, there was also much progress in2014 on defining the post-2015 development agenda. This framework, which will guide future efforts in economic and sustainable development, identifies businesses and industries as key drivers of growth. The private sector has the opportunity to deliver widespread benefits for society by developing products, services and business models that solve global challenges.

The first theme is inclusive growth: how to better share the benefits of prosperity more equitably. This is important for the private sector because addressing income inequality will lead to more business opportunities and expansion of markets.

The first theme is inclusive growth: how to better share the benefits of prosperity more equitably. This is important for the private sector because addressing income inequality will lead to more business opportunities and expansion of markets. Rising incomes are already driving a significant expansion of the middle class in Asia, which creates more demand for goods and services.

A second, complementary theme is regional economic cooperation and integration. As countries in the region prosper, there are more opportunities for the private sector to benefit from increasing trade within the region. To support this, investments in infrastructure connectivity – including transport, energy and Information and Communications Technology(ICT) – are essential. Financial cooperation to mobilise and channel funding towards these areas is also critical.

The emergence of new regional development banks, such as the Asian Infrastructure Investment Bank and the New Development Bank of the BRICS (Brazil, Russia, India, China and South Africa), can play a very important role in supporting existing sources of funding and making possible massive infrastructure investments. And in turn, huge opportunities for businesses to expand their participation in trade and investment.

In the Asia-Pacific region and elsewhere, the inequalities that have risen alongside economic growth must be tackled and reduced in all their forms. This is important for the private sector too, as prevailing inequalities will undermine the region’s economic dynamism.

ESCAP has calculated that, had inequality not increased in the three largest countries of the Asia-Pacific region, namely China, India and Indonesia, an additional 190 million people would have been lifted out of poverty since the 1990s. Fundamentally, whether related to income, opportunity, or power, we need to reduce the inequalities in Asia through action that supports and promotes human rights and which eradicates the structural causes of inequality.

This could involve strengthening social protection and creating decent and productive work for all; ensuring universal access to public services such as education and healthcare, and guaranteeing civil and political freedoms. This is especially important to empower women and youth across our region.

I am deeply optimistic about our regional prospects. The Asia-Pacific region has the dynamism, the resources, the know-how and motivation to not only drive global growth, but also to lead on sustainable development. The key to the future we want is pro-poor growth which eliminates extreme poverty and reduces inequalities, while ensuring the health of our natural environment. 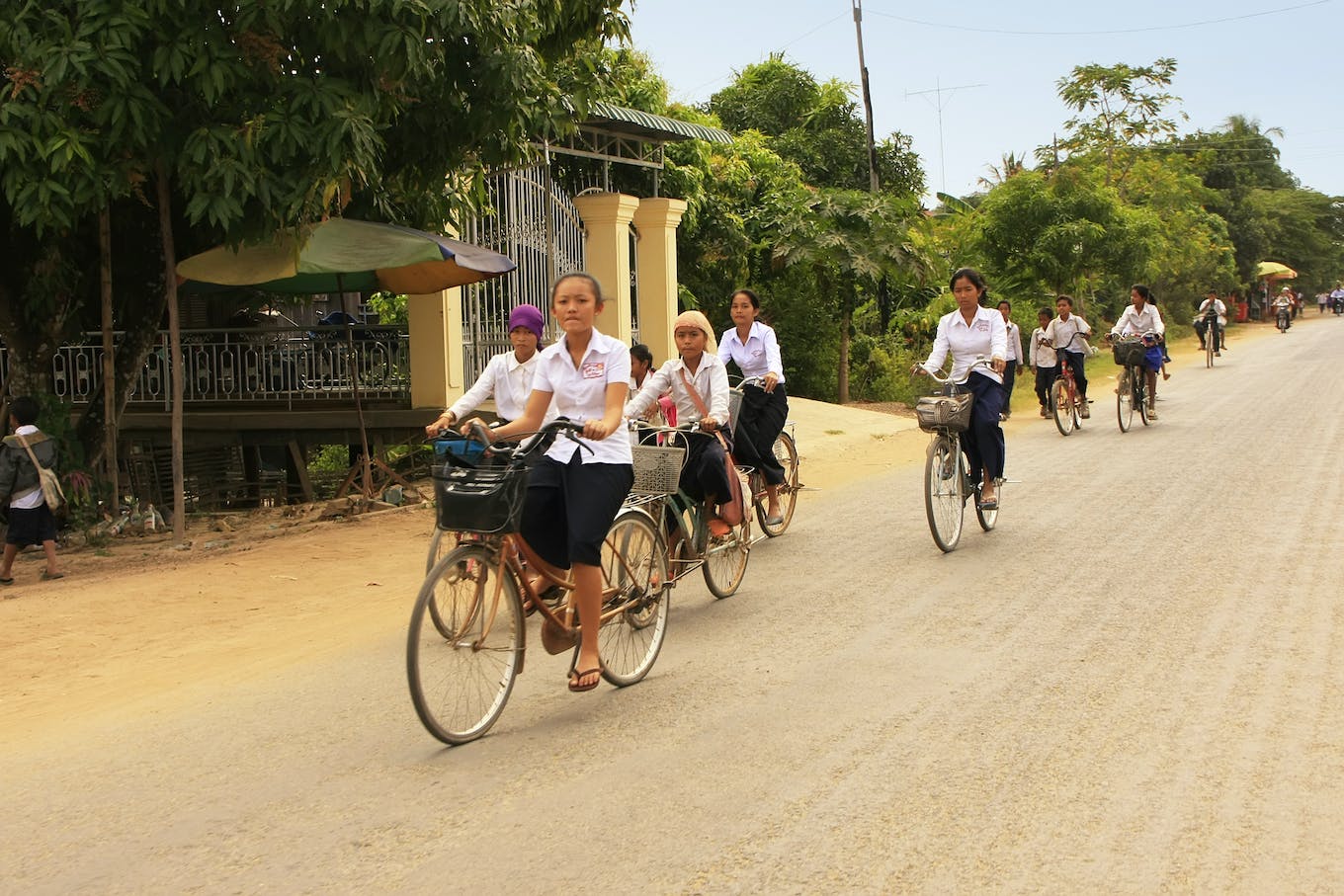 Students cycle to school in rural Cambodia. Asia’s high rates of population and economic growth pose challenges for sustainable development in the region, but also opportunities for innovation. Image: Shutterstock.com

The Paris summit this year has to deliver ambitious goals and actions to stave off further acceleration of climate change and put the world on a safer trajectory, in spite of the political difficulties in the process of negotiations.

The five UN Regional Commissions, including ESCAP, have an important role in facilitating such agreement, especially through supporting our developing member states to push forward national strategies which focus on both their development aspirations and climate actions. We need a shift away from the conventional “trade-off’ mind-set, and to strengthen the flow of climate financing and clean technology transfer to developing countries.

The next ESCAP Commission session, which is the largest and most inclusive annual intergovernmental meeting for the countries in Asia Pacific will be held in May 2015. It will focus on carrying forward dialogues on sustainable development, exploring how to facilitate integration and implementation of sustainable development goals and the financing arrangements that will be needed to implement the post-2015 development agenda.

These dialogues at the Commission session will feed into the wider global debates and negotiations on sustainable development goals, as well as to the Third International Conference on Financing for Development, to be held in July in Addis Ababa.

At ESCAP we are focused on growing our support for least developed and landlocked developing countries, as well as the Pacific Island developing States. The promotion of greater regional economic cooperation and integration will be critical in advancing these interests and in building prosperity for all the people of Asia and the Pacific.