Pressure mounts to take blue shark off the menu

Blue sharks are still being overfished despite a clamp down on the shark fin trade.

By Ryan Kilpatrick, Chinadialogue Ocean
May 29, 2018

Editor’s note: This article is part of an ongoing series exploring the evolving role of Hong Kong as a gateway for unregulated and illegal fishing within the international food trade.

With a quarter of shark species now facing extinction, the sale and consumption of shark fins has become indefensible to most people following public awareness campaigns and the protection of some species. But in Hong Kong, the hub of the global trade, there is still one familiar refrain: “we only trade in abundant blue shark fins,” merchants and caterers say, “not endangered species.”

lex Hofford, a campaigner with pressure group WildAid, calls it the industry’s “get-out clause,” and it’s the official line taken by the city’s seafood traders as well as by Maxim’s, the city’s largest chain of Chinese restaurants.

Maxim’s Caterers, run by managing director Wei Kuo Wu, is a member of the Jardine Matheson Group, a British conglomerate. They are a licensee of global brands such as Starbucks Coffee, Ipuddo Ramen and The Cheesecake factory. In 2016, company profits were US$848 million.

At over 50 outlets citywide, Maxim’s offers what they call “sustainably sourced” shark fin dishes from blue sharks, a species listed as near-threatened by the International Union for Conservation of Nature (IUCN).

But a growing number of marine biologists, fisheries experts and green groups are saying that blue sharks have come under unprecedented pressures since 2005—the year they were last assessed by the IUCN—and will soon join the endangered list if fishermen don’t stop targeting them.

In a letter addressed to Maxim’s, WildAid collected the signatures of over 250 scientists, academics and environmental organisations.

As well as celebrities including Sir Richard Branson, Dr Sylvia Earle and Dr Jane Goodall, the signatories are a veritable who’s who of Hong Kong and mainland China’s foremost marine scientists. WildAid’s shark fin campaign has also won the support of Chinese basketball star Yao Ming, and the group’s latest ad campaign in Hong Kong has been fronted by local actor and director Bowie Wu.

Even more exhaustive is the breadth of research catalogued to substantiate their concerns about blue sharks, now the most frequently caught species among the 100 million sharks estimated by a Dalhousie University study to be killed worldwide each year.

Blue shark fins remain the most heavily traded of all species in the Hong Kong fin trade.

Recent peer-reviewed research shows that blue shark numbers more than halved in areas of the Pacific and Atlantic oceans between the late 1980s and early 2000s. With year-on-year declines up to 6 per cent globally.

Other species fuelling the shark trade, such as scalloped hammerheads and oceanic whitetips, were brought under CITES Appendix II protection in 2013, thus prohibiting their harvest. Since then, blue sharks have become the dominant species in the shark trade, putting it in peril.

The trouble with their current listing, is that it was last assessed in 2005 using studies published no later than 1999. A lot has changed in the past 19 years.

Globally, there are calls for the reassessment of blue sharks’ status. Last October, Samoa’s proposal to list the blue shark as under threat was accepted by the 12th conference on the Convention on Migratory Species (CMS), held in the Philippines.

Although measures offered by CMS listing are limited to awareness raising and promoting international cooperation, it is considered a springboard to legally-binding protections under the more influential Convention on International Trade in Endangered Species (CITES), which will be hosted next year by Sri Lanka, co-sponsor of Samoa’s blue shark proposal.

“Global captures have increased dramatically since 2000,” the Samoan species proposal read, adding that the proportion of blue sharks in total shark and ray landings had more than tripled from 4 to 14 per cent between 1998 and 2011.

According to a 2009 study by Canada’s Bedford Institute of Oceanography, bycatch constitutes a substantial but under-reported threat to highly migratory blue sharks, now the world’s most frequently discarded fish species in pelagic longline fisheries. In the Canadian Atlantic, they estimate that unreported bycatch of blue sharks is about 100 times greater than what is reported.

The threats faced by blue sharks are coming from all directions, but despite emerging problems like bycatch and the growing market for shark meat, Hong Kong is still singled out as a particular source of peril for the species.

“Blue shark fins remain the most heavily traded of all species in the Hong Kong fin trade,” according to the Species Survival Network, “comprising 17.3 per cent of fins in 2005 [and] growing to as much as 64 per cent of trade in 2015.”

Campaigners hope that by compelling Maxim’s to take a principled stance before the law forces them to, they can have a “domino effect” throughout the catering industry, similar to when aviation and shipping firms followed the example of Cathay Pacific and Maersk Line to refuse shark fins from their cargo holds. 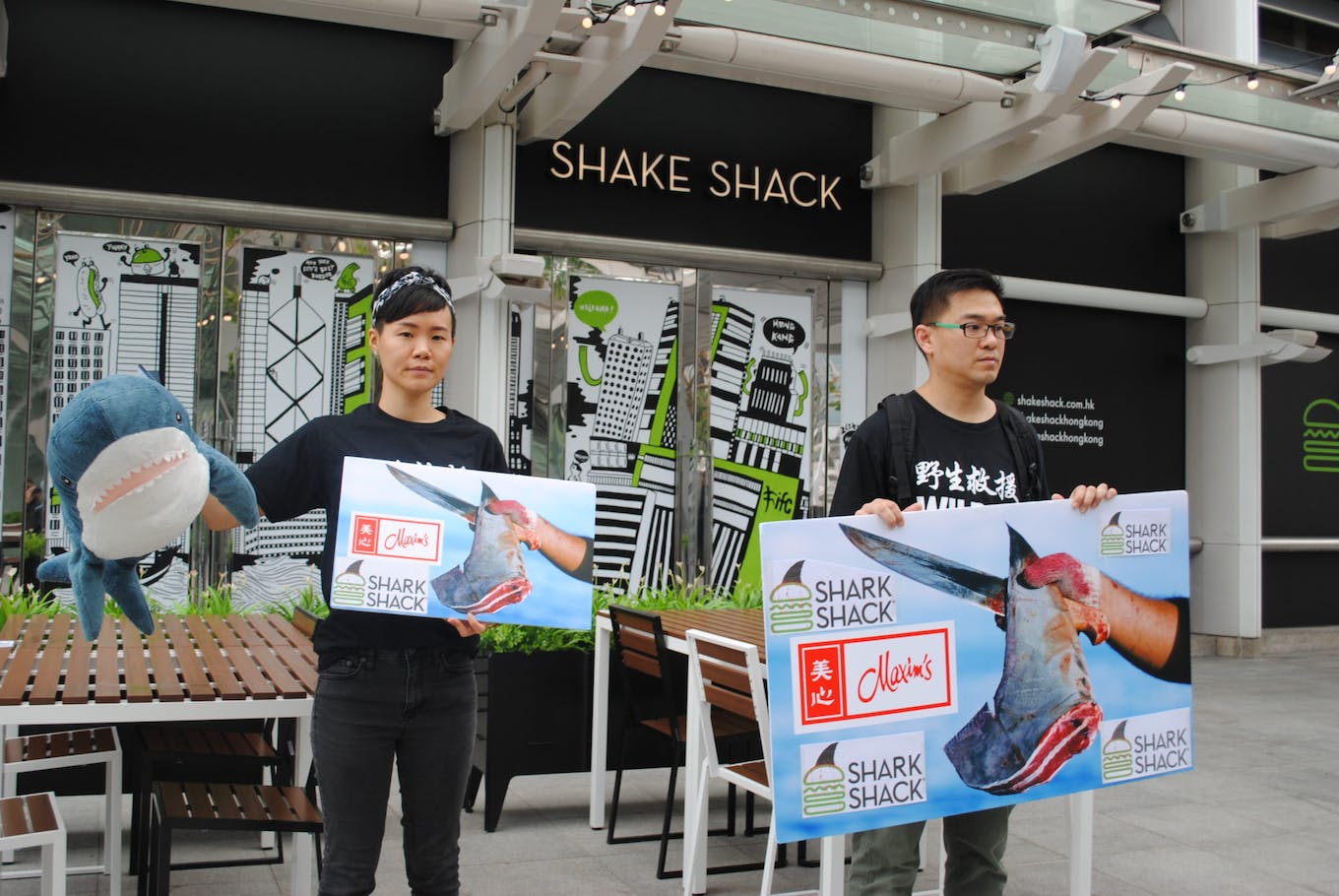 WildAid’s motto is “when the buying stops, the killing can too,” and they are determined to change consumers’ habits here at the heart of the trade.

In response to chinadialogue ocean, Maxim’s Caterers said that their outlets are seeking to “promote alternatives to shark fin dishes” but have no plans to take these off the menu. Asked whether there was any scientific basis to show that blue shark fins were sustainably sourced, the company’s public relations department did not respond.

Campaigners have started to direct their efforts at US burger chain Shake Shack, whose mission to “Stand For Something Good” has been undermined by their local partnership with Maxim’s. They have demanded to know why Shake Shack’s pledge to work with “like-minded purveyors we admire and love” was not upheld in Greater China, but have yet to receive an answer.

Chinese consumers’ appetite for shark fin soup is far from the only threat to these marine predators. Sea Shepherd’s Asia director Gary Stokes points to the thousands of tonnes of blue shark landed at Japan’s Kesennuma fishing port to be processed into shark cartilage supplement pills, and the havoc wreaked by Spain’s deep water fleet.

Across the European Union (EU), a “fins attached” rule introduced in 2013 has bolstered secondary markets for shark cartilage, organs and meat, Stokes says.

This legislation requires fishing vessels to land the entire shark, rather than slicing off the fin and dropping the carcass back into the sea. Although the policy set out to reduce capture rates, it has also led to a boom in these secondary global markets in shark meat.

“Everyone talks about fins,” Stokes says, “but we need to talk about killing of sharks en masse. It’s not just the Chinese who are eating shark.”

Whether it’s marketed as flake, rock salmon or something else, more and more people in markets such as Spain and Brazil are consuming cheap shark meat, Stokes says. After Sea Shepherd and the East Timor National Police busted a fleet of illegal Chinese fishing vessels last year, Stokes found the holds full of whole sharks due to be processed in China, in a plant that then exports meat to Australia.

While Japan, Taiwan, Indonesia and China continue to play major roles, the largest proportion of frozen shark fins coming into Hong Kong has, until being overtaken by Singapore last year, come from Spanish ships operating off Canada’s coast in the North Atlantic.

Environmental groups are taking on the shark industry from very different angles, but they agree on this fundamental point: that species-specific measures are merely stopgaps and only a complete shutdown of industrial shark fisheries will enable populations to recover.

At a protest in April organised by WildAid outside two of Maxim’s locations, around a hundred shark protection activists rallied to demand that the company follow through on its pledge to “closely monitor new environmental factors, and review [their] strategies responsibly.”

Placards compared diners’ persistent appetite for shark fin to other cultural habits once widespread in Hong Kong but now considered wrong and outdated. These included slavery, footbinding, the use of spittoons, and the buying and selling of young girls known as mui tsai.

Dr Daniel Pauly, an eminent fisheries expert at the University of British Columbia and a signatory to WildAid’s letter to Maxim’s, agrees. “Nothing short of a global ban on finning sharks, and selling, buying and transporting shark fins will do,” he says.