Covid-19 helped wind and solar push coal to a record drop, but emissions from power production were still higher in the pandemic year than in 2015, new research shows.

Since the landmark accord, skyrocketing power demand has outpaced clean energy growth, leading to a steep increase in fossil fuel burning. Although Covid-19 paused the rise in electricity demand in 2020, this meant power sector emissions were still 2 per cent higher than five years before.

The report, by London-based energy think tank Ember, finds the disruption in electricity demand growth allowed solar and wind to drive a record fall in coal combustion in 2020, with power generation from the fossil fuel down 4 per cent.

But while global power demand fell slightly (0.1 per cent), it bounced back in December as economies recovered, and even shot past 2019 levels in India, Europe, Japan, South Korea, Turkey, and the US, underlining the vast renewables growth needed to ensure coal keeps declining.

Progress is nowhere near fast enough.

Since 2015, electricity demand rose by 2,536 terawatt-hours (TWh), or 11 per cent, outstripping the 2,107 TWh increase in clean generation. As a result, gas-fired power rose 11 per cent, and coal generation fell only 0.8 per cent.

The International Energy Agency has warned that coal—the biggest source of man-made emissions—must decline by 14 per cent every year to keep the world on track for net-zero emissions by 2050, yet 2021 has already seen an increase in coal burning in China, India, and the US, finds the paper.

“Progress is nowhere near fast enough. Despite coal’s record drop during the pandemic, it still fell short of what is needed,” said Jones. “World leaders have yet to wake up to the enormity of the challenge.” 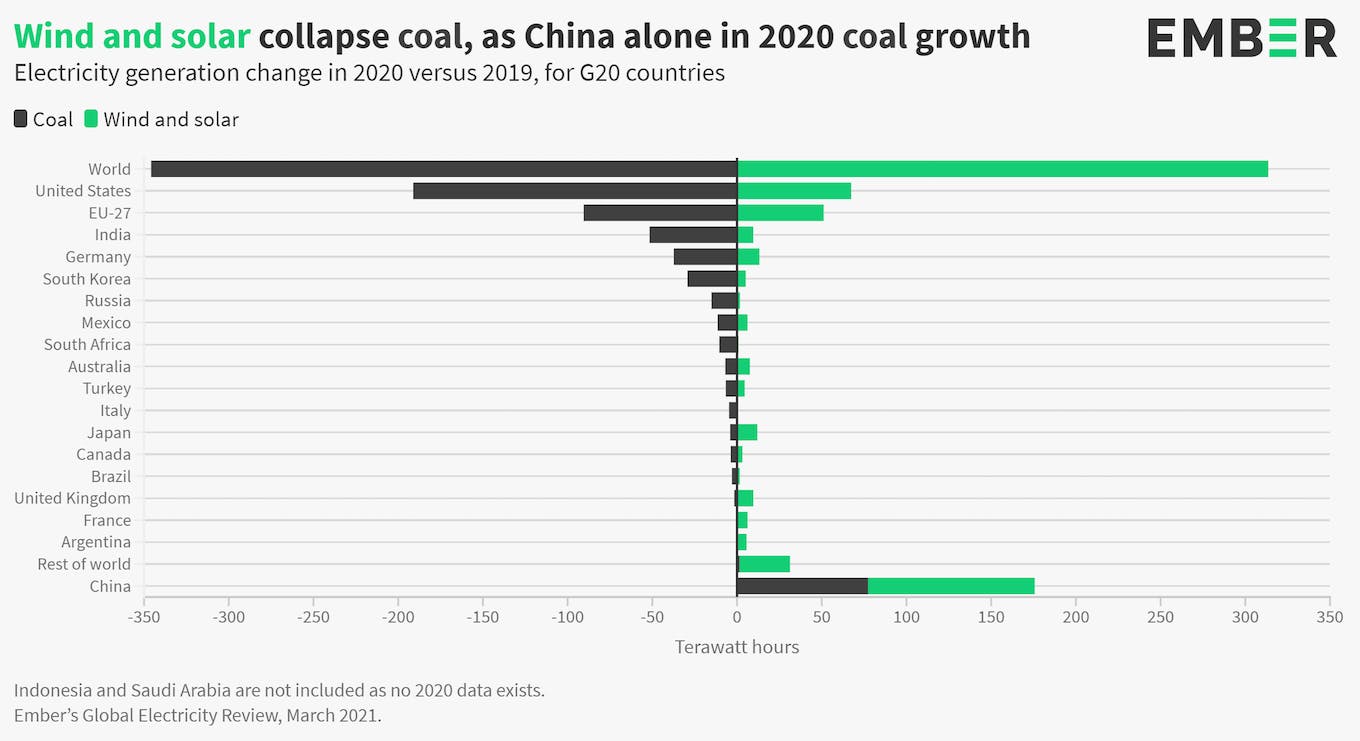 Solar and wind pushed coal to a record fall last year, with power generation from the fossil fuel down 4 per cent from 2019. Image: Ember

The new study, titled Global Electricity Review, finds global power production from wind and solar showed resilient growth in 2020 despite the pandemic, increasing by 15 per cent, equivalent to more than the United Kingdom’s entire power production.

Wind and solar supplied almost a tenth of global electricity, more than doubling from 4.6 per cent in 2015, giving confidence in how quickly renewables capacity can be built. Europe is leading the way, with penetration in Germany at 33 per cent, and at 29 per cent in the UK.

Coal collapsed almost everywhere, with large drops in the United States (20 per cent) and Europe (20 per cent). The four largest coal-generating countries after China—India, the US, Japan, and South Korea—all saw a reduction in coal power.

China was the only G20 country that saw an increase in coal combustion (2 per cent) in 2020, the year it pledged to become carbon neutral by 2060. The country was responsible for more than half of coal burned globally, and its electricity demand per capita is now higher than the UK’s and Italy’s.

The new study comes as research shows that 18 per cent of China’s 1,037 active coal-fired power plants are—from a technical, economic and environmental perspective—performing poorly and suitable for rapid retirement to meet the country’s climate goals.

The International Renewable Energy Agency estimates that the world must source at least 85 per cent of global power and a minimum of two thirds of total energy from renewables by 2050 to keep climate change at bay.