After more than a decade of hard-won gains in the fight against poverty, the number of poor people in Myanmar could double as a result of the combined impacts of the Covid-19 pandemic and the ongoing political crisis.

The twin challenges of the Covid-19 pandemic and the ongoing political crisis triggered by a military coup could result in nearly half of the population, or as many as 25 million people, falling into poverty by 2022, a level of impoverishment not seen in the country since 2005, the United Nations Development Programme warns.

In a report released on 30 April, the UNDP said that the duration and severity of the two crises have strained the country’s already vulnerable system, despite the significant gains in poverty reduction in the past decade.

Last November Myanmar held a general election that returned Aung San Suu Kyi, the de facto leader of Myanmar, and her government to power. On 1 February, the army seized power in a coup, claiming without evidence that the poll had been marred by voter fraud.

Hundreds of thousands of Burmese took to the streets in protest. The junta has retaliated with indiscriminate killings, house raids and the arbitrary arrest of thousands of people suspected to oppose the coup.

The Assistance Association for Political Prisoners (AAPP) rights monitoring group says security forces have killed 769 people since the coup – a figure contested by the military. Protesters are now using makeshift rudimentary weapons to fight back while others are looking to rebel militias on the country’s borders for assistance.

A third of the population was already subsisting on low levels of consumption while household income was precariously dependent on the informal economy. The study showed that by the end of last year, on average, 83 per cent of households had reported their incomes had been cut almost in half due to the pandemic. 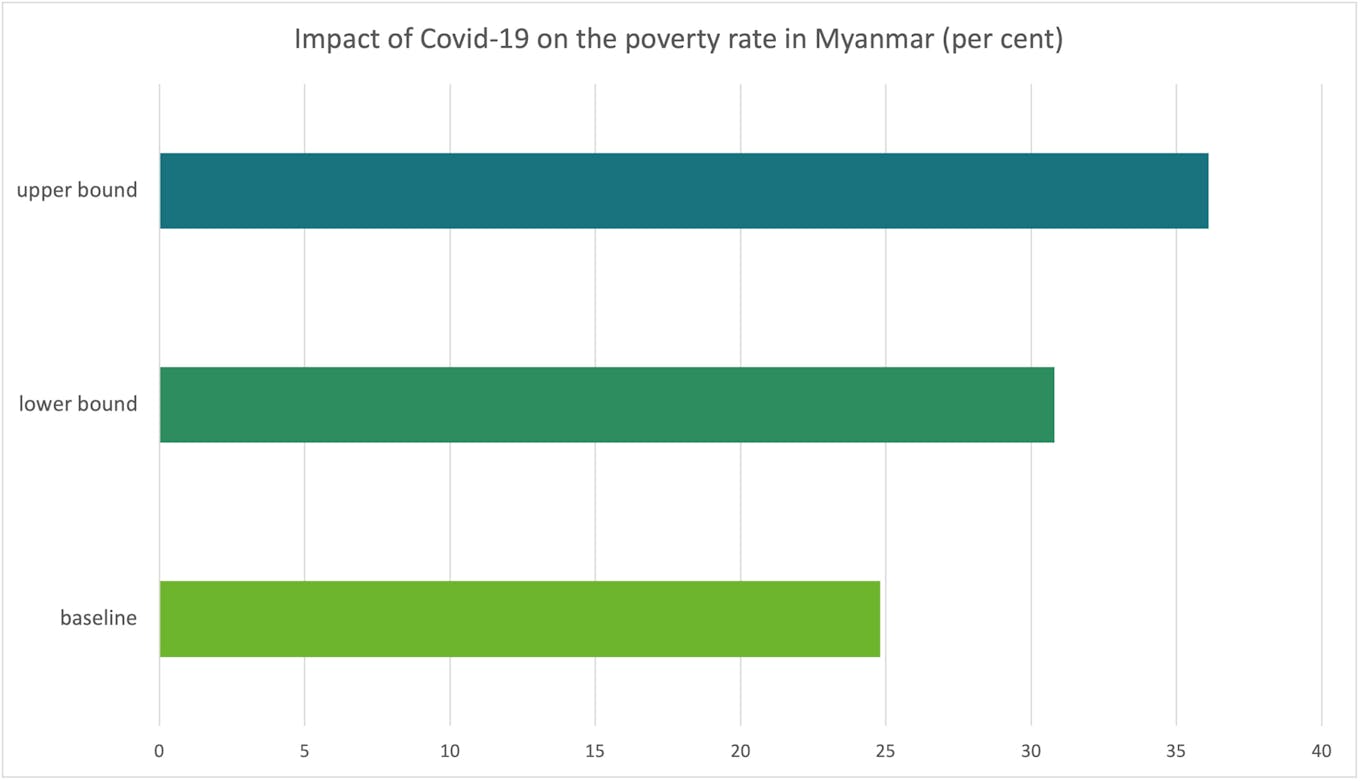 Given that the pandemic is far from over, and thus associated with heightened uncertainty, UNDP’s analytical approach provides both a lower and upper bound of potential poverty increase owing to the pandemic. Eco-Business charts. Source: UNDP

An economic crisis will deepen privation. The World Bank in April projected an economic contraction of 10 per cent in 2021 due to substantial employment and income losses, a lack of government safety nets and public investment.

The political crisis has also stifled economic activities including the virtual standstill of banking operations and a significant drop in trade due to disruptions to supply chains and getting goods through the port system.

“All these reports indicate that Myanmar is approaching the point of economic collapse,” the report notes.

Women and children are expected to bear the heaviest brunt of the combined impact of Covid-19 and protracted political instability, according to the UNDP. This is particularly the case in urban areas that have been hard hit by the pandemic and have staged the most severe crackdowns by the junta on protesters. On 9 April, more than 80 people were gunned down by security forces in the provincial city, Bago.

The worst-case scenario outlined by the UNDP expects more than half of children to be living in poverty if the political crisis continues to rumble on. This will exacerbate the intergenerational persistence of poverty, which coupled with school closures, could cast a shadow over the human capital of the next generation. 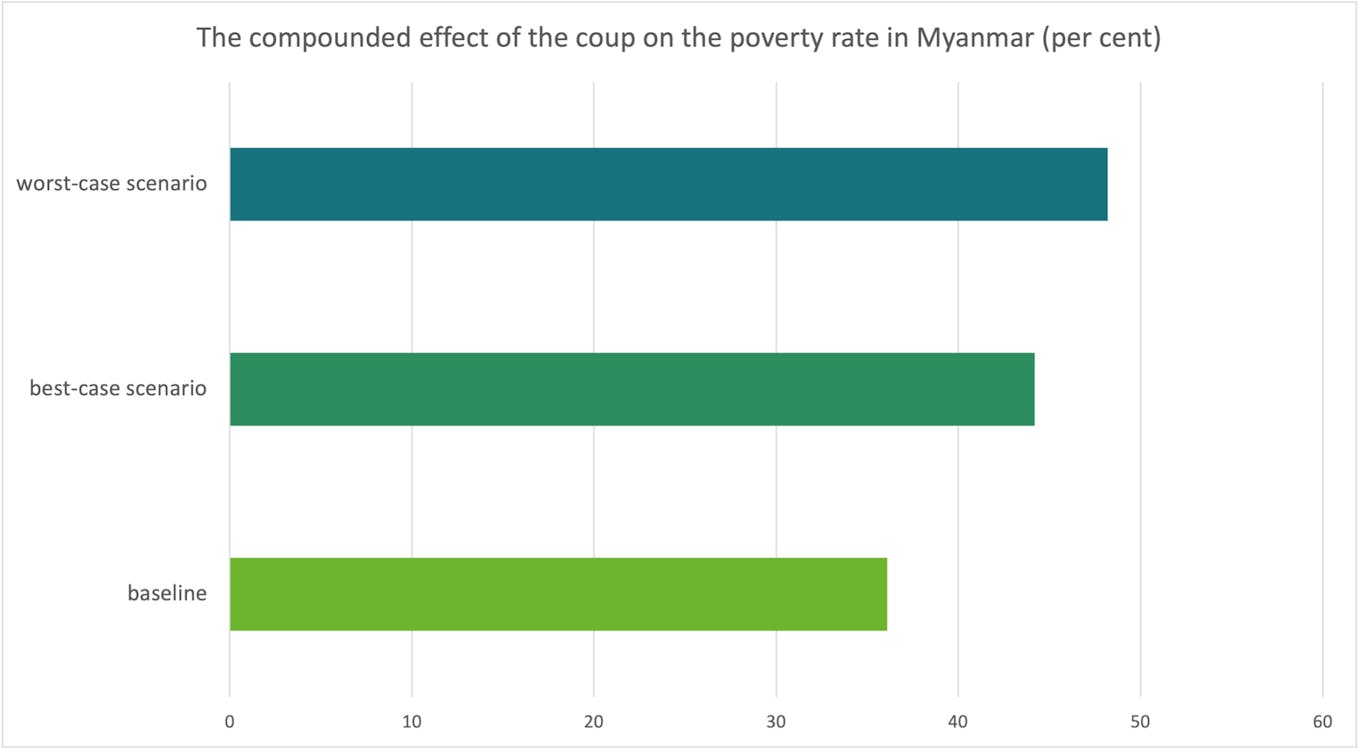 The UNDP predicts that the poverty rate will jump to 48.2 per cent in its worst-case scenario, which means that nearly half of the population in Myanmar would be impoverished due to the combined effect of the two shocks - Covid-19 and the coup. Eco-Business charts. Source: UNDP

Beyond rising poverty rates, the report notes, preliminary evidence on the ground is showing that the profound impacts of Covid-19 and the coup will undo years of progress made since the country returned to democracy in 2011 after a lengthy spell of military rule that saw Myanmar become a pariah state.

“Already weakened by Covid-19 and further exacerbated by the ongoing situation on the ground, the country risks seeing the Sustainable Development Goals pushed out-of-reach and a complete reversal of human development gains made over the last decade,” the UNDP warns.

Meanwhile, the country appears to be returning to the isolation that preceded a decade of democratic reforms, further complicating humanitarian efforts. The military declared a ban on satellite television receivers on Tuesday (4 April), saying outside broadcasts threatened national security. Mobile internet has been partially cut in a bid to quell protests.