Policies for building back better are ‘a matter of political will’: UN chief economist

Most resources are still flowing into unsustainable activities because of inertia, the way risk is assessed, and ‘debilitating’ uncertainty over what sustainable investment is, said UN assistant secretary-general for economic development Elliott Harris.

Public policies must change to encourage sustainable behaviour and actively discourage unsustainable actions, if the world is to forge a better recovery from the Covid-19 pandemic, said United Nations assistant secretary-general for economic development Elliott Harris on Thursday (10 September).

Even before the Covid-19 pandemic, the world was off-track in achieving the UN Sustainable Development Goals, he said.

This is because public policies have not evolved to match international commitments such as those under the Paris Agreement to cap the rise in global temperatures. Most available resources are still flowing into unsustainable activities such as the burning of coal for energy, Harris said at a virtual conference titled Unlocking capital for sustainability 2020: Building back better, organised by Eco-Business in partnership with the UN Environment Programme.

“It is still possible, unfortunately, to make a good profit doing unsustainable things. And for many, that’s enough of a reason to continue,” he told an audience of financial and business decision makers.

It is still possible, unfortunately, to make a good profit doing unsustainable things. And for many, that’s enough of a reason to continue.

The most important change needed for the world to build a better post-pandemic future, is a “clear and predictable stance for policies for sustainability”, he said. 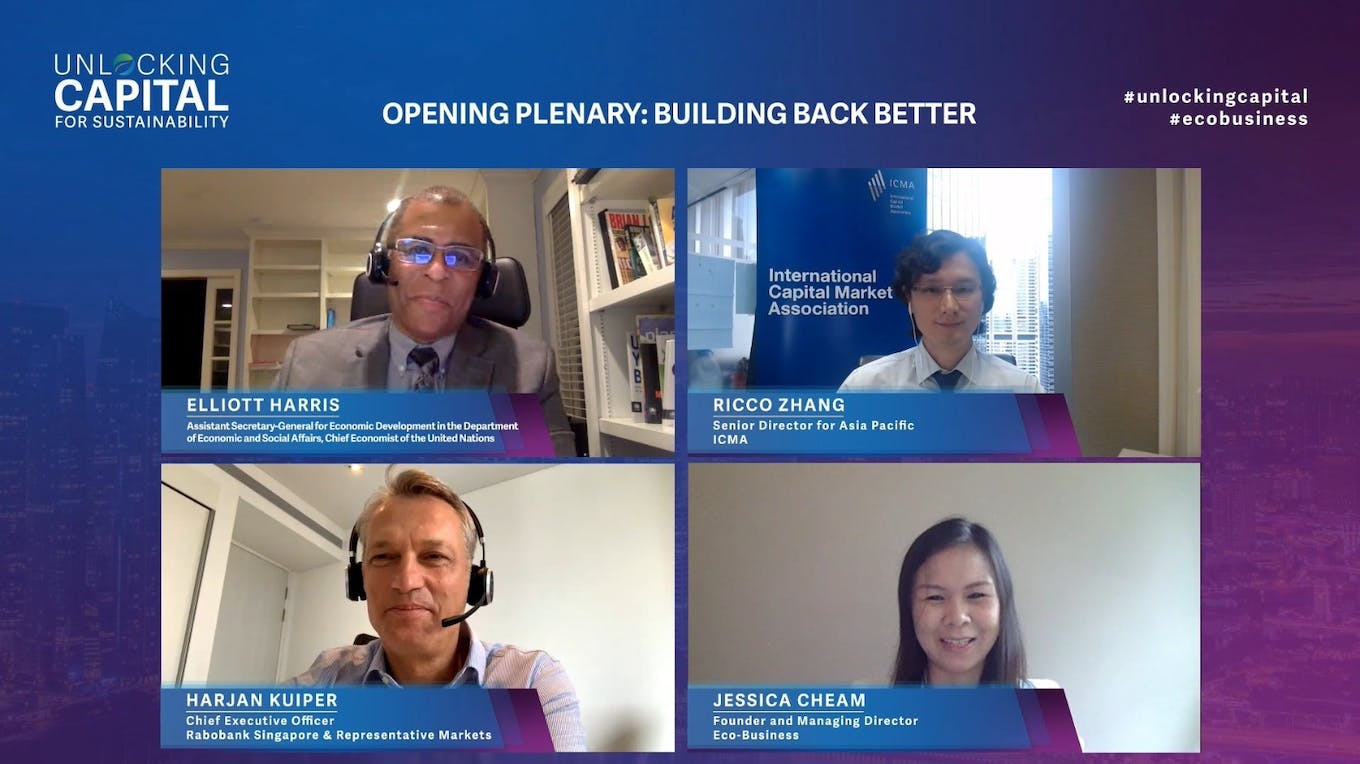 “They include things like sustainable public procurement policies and practices, they entail stepping up investments in sustainable infrastructure. And in today’s world, they should also include efforts to green stimulus packages,” he said.

“The policies against unsustainability are equally self-evident. For example, it’s the elimination of fossil fuel subsidies, and the elimination or reduction of any kind of intervention that could support or encourage unsustainable activities. But it could also be differential tax treatment, imposing higher taxes or higher penalties on activities that are unsustainable. It is the adoption of stiffer environmental regulations. And none of this is new. It’s all a matter of political will.”

At a panel discussion on the progress of sustainable finance in the region after his speech, Harris said a problem lies with the lack of consistency across different actors in the financial markets. Governments can send conflicting messages—for instance, some of the most vigorous champions of the UN’s sustainable development agenda may also be supporters of coal-fired energy. “I think that confuses markets quite dramatically,” said Harris.

An argument governments make for continued investment in unsustainable fossil fuel activities is that they are protecting jobs, but this does not hold water, Harris said in reply to a question from discussion moderator Jessica Cheam.

“It is not the workers whose interests are being protected here because, let’s face the facts, none of us can say exactly on what day the last coal fired power plant will be shut down. But I know it’s going to happen in my lifetime, probably before I retire,” said Harris.

The argument for continued investment in fossil fuels plays to a legitimate concern on the part of those whose jobs are threatened, he added. “But that is not the right response. The right response is to provide support for people to shift away from these activities that have no future, and move into one that can continue to generate a livelihood for them for a longer period of time.”

It is not the workers whose interests are being protected here because, let’s face the facts, none of us can say exactly on what day the last coal fired power plant will be shut down. But I know it’s going to happen in my lifetime, probably before I retire.

Acknowledging that not everyone will be able to transition to a new-economy role, Harris said this is why governments’ Covid-19 response must include social protection measures.

Another panellist, Ricco Zhang, senior director for Asia Pacific of the International Capital Market Association, said governments are aware of the need to shift to low-carbon energy, but probably want to take a gradual approach. “Maybe in the next five or 10 years, I think this will happen,” Zhang said.

An encouraging sign in China—the world’s largest producer and consumer of coal—is the central bank’s new consultation draft of its green bond catalogue which, for the first time, removes “clean coal” and fossil fuels from the list of investments for which green bonds can be issued, he noted.

A fellow panellist, Harjan Kuiper, chief executive of Rabobank Singapore and Representative Markets, called for greater investment in technology to decarbonise the food and agricultural sector. A significant proportion of agricultural emissions, mostly those from livestock farming, “cannot be stopped with current technologies”, he said.

The mobilisation of finance for the greening of small and medium enterprises, which has received little attention to date, was another issue raised during the discussion.

The investment needs of small enterprises are usually too small to attract large investors, and Harris said banks could play a major role in helping small companies develop investment plans that are bankable. These plans could then be consolidated into an investment vehicle large enough to draw the attention of capital markets, he said.

Zhang agreed that banks play an important role in channeling sustainable finance to small and medium companies to encourage them to meet their climate obligations. In addition, many governments in Asia have tools such as taxes and other incentives to nudge small and medium firms towards sustainability, he said.

Urging policymakers to pursue a sustainable recovery, Harris said: “I would encourage policymakers to take the difficult decision. We will support you. You needn’t worry.”

Transition finance is critical to help companies decarbonise, and time is running out.
'In the future, sustainable products will be conventional products': UOB chief sustainability officer Eric Lim

Financial institutions need to work with emitters instead of jettisoning them to green their portfolios, said panellists at the Unlocking Capital for Sustainability event organised by Eco-Business.
Divestment a 'short-term' fix that does not decarbonise real economy: net-zero alliance Asia chief

Nuclear tipped to be a 'game-changer' for India's energy transition

Atom-splitting could help India 'leapfrog' fossil fuels, according to Delhi-based climate entrepreneurs. One investor at the Unlocking Capital for Sustainability event said the risk of nuclear accidents was 'overblown'.
Nuclear tipped to be a 'game-changer' for India's energy transition

The country’s largest bank pledged that it will reduce its coal exposure by half by 2033, though it qualifies that this does not include short-term working capital “that companies will need to transition out of the coal business”. It says it has not been financing any new capacity since 2019.
Philippine leading lender BDO Unibank imposes stricter conditions for coal-related financing