News The Pack That Grows Back

Picking the pack that grows back

The pressure is mounting on companies to source paper from responsibly managed forests. Here is how packing giant Tetra Pak plans to double the recycling rate of its cartons by 2020.

Many consumers might not know this, but on some beverage cartons lurks a little symbol that tells you whether or not they are made with paper from wood that comes from responsibly managed forests.

This symbol is none other than the FSC logo, a little tree with a tick, by the Forest Stewardship Council, an independent, non-profit organisation based in Bonn, Germany that offers one of the most credible forest certification schemes for businesses. Besides conserving high biodiversity value forests, the certification scheme aims to ensure that businesses respect the rights of workers, communities and indigenous peoples.

As awareness grows globally about the need to protect the world’s forests, this FSC logo has become ever more important in enabling consumers to choose wood and paper-based products that support responsible forestry. 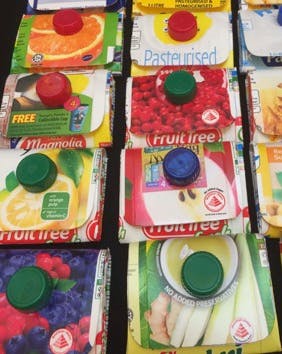 Brian May, managing director of Tetra Pak Malaysia, Singapore and Philippines told Eco-Business in a recent interview that about 41 per cent of Tetra Pak cartons in Malaysia now carry the FSC label, a steady increase from 14 per cent in 2015 and 33 per cent last year. The company aims for an eventual 100 per cent by working closely alongside its customers in driving the sustainability agenda. Major industry names that pack their products in Tetra Pak cartons include Ace Canning, Dutch Lady, F&N, Marigold, Nestle and Yeo’s.

May was speaking on the sidelines of a recent event held in Malaysia in partnership with FSC to launch a campaign called “The Pack that Grows Back”.

Held over 10 to 13 November at Sunway Pyramid Shopping Mall at Kuala Lumpur, the campaign sought to raise consumer awareness of the FSC label.

Visitors took part in an interactive exhibition where they could follow the process in which their drink cartons were created; from the forest to the factory where the paperboard is made, to the retail stores, and finally, to the recycling station.

Consumers were also invited to design their own beverage cartons, and say how they could transform them into eco-wallets, namecards or baskets.

May explained that currently, the company’s packaging carries the “FSC Mix” label, which means its paper fibres are sourced from a mixture of FSC certified forests, recycled materials and low-risk forests.

As of April this year, Tetra Pak has delivered 200 billion FSC-labelled cartons to its clients.

“Imagine if 200 billion decisions were made to buy products with an FSC label to ensure they come from well-managed forests,” said FSC’s Asia Pacific regional director Alistair Monument. “This would send a strong message to the markets and governments.”

Consumer awareness of the FSC logo can be improved, he added. Tetra Pak’s Environment Research 2015 found that two out of five consumers look for environmental logos when they shop. However, less than a quarter of the 6,000 consumers across 15 countries surveyed recognised the FSC logo.

Paperboard is the main material used in a Tetra Pak package, making up more than 70 per cent of it. Since 2015, all of the paperboard Tetra Pak has used to make its cartons comes from FSC-certified and controlled sources, said the company.

All of Tetra Pak factories and market companies worldwide have secured FSC’s Chain-of-Custody (CoC) certification. The CoC certification prevents untraced wood products from being mixed with FSC-certified products in a supply chain.

“We have had to sort out our rules in FSC in 2005 to make such a large-scale certification possible,” he added.  As one of the early adopters of the FSC certification scheme, Tetra Pak has worked for almost a decade to achieve one of FSC’s largest multi-site certifications. It was the first to start the process to certify its supply chains in 92 sites worldwide in 2007, said Monument.

Tetra Pak sources its wood from forests in countries such as Sweden, Finland, Russia and the USA: “Now most of the plantation forests [they buy from] are certified, it has driven real change on the ground,” said Monument.

Tetra Pak has stationed an environment team in every country to lower the overall ecological footprint of its business operations. In Malaysia, the environment team has developed a recycling system for Tetra Pak cartons.

Terrynz Tan, environment director of Tetra Pak Malaysia, Singapore and Philippines, explained that since the company’s cartons are not 100 per cent paper-based, it was initially difficult to establish a recycling system.

“When we first approached local recycling mills, they didn’t know if it was possible to recycle it. But eventually, they found a way and now we have 500 collection points in Malaysia,” she said.

A quarter of Tetra Pak cartons are made of plastic (polyethylene) and aluminium. These are separated from the paperboard via the hydra pulping process in recycling mills.

The paper fibres recovered are turned into pulp sheets again to make paper products. The residues - polyethylene and aluminium - are recycled into light, highly compressed boards that can be used as panel boards in furniture, roof sheets or other items.

About one in three cartons in Malaysia are recycled, translating to 477 million cartons saved from landfill in 2015.

Tetra Pak has also introduced a fully renewable plant-based package to the market in 2014 to improve the sustainability of their products’ life cycle.

This new package called “Tetra Rex” was first introduced in retail stores in Finland in January last year. May said Tetra Pak expects to deliver more than 100 million packs by the end of 2016 due to strong demand in Finland, Sweden and Norway.

“We believe it makes good business sense to be environmentally responsible,” May said.