Observers are sceptical if the finance facility can solve the fiscal burdens of the debt-ridden nation. Unlike China and Singapore which run similar mechanisms, the Philippines does not enjoy rich budget surpluses.

A sovereign wealth fund is a state-owned investment fund comprised of money generated by the government, often derived from a country’s surplus reserves.

Diokno said the finance facility called the Maharlika Investment Fund (MIF) will “support the goals” set by the government under its economic and social transformation plan to reinvigorate job creation and accelerate poverty reduction.

“The fund, which will be keeping with the highest standards of accountability and sound fiscal management, aims to diversify the country’s financial portfolio,” Diokno told attendees during a luncheon hosted for President Ferdinand Marcos, Jr, government officials and business leaders.

The 18-member Philippine delegation is in the Alpine ski town for a five-day trip to attend the WEF annual general meeting which brings together billionaires and politicians under the banner of forging ties that can help solve global problems.

“May the next few days bring forth more intensive collaboration and cooperation towards genuine economic transformation,” the finance chief said. 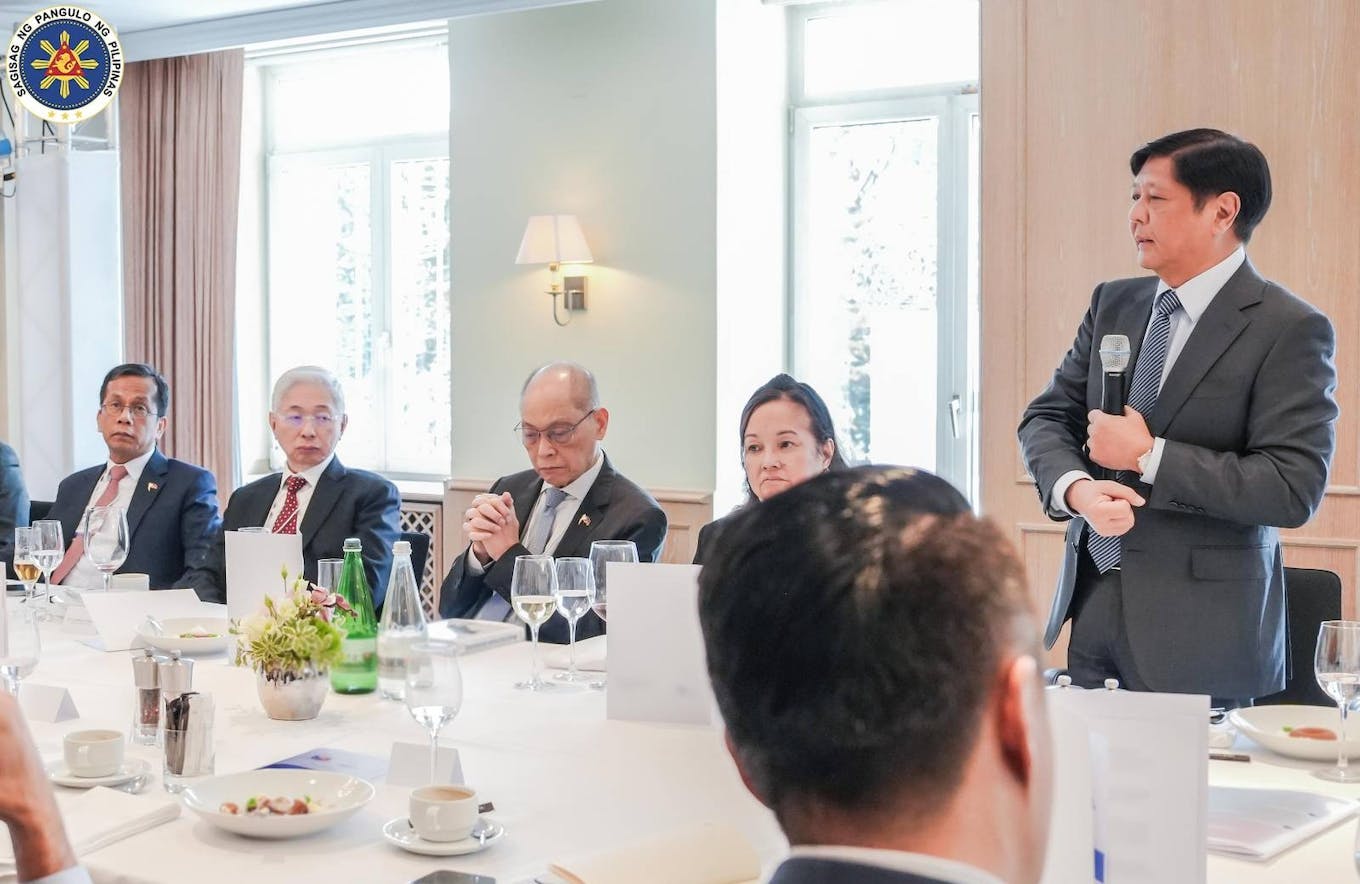 Philippine president Ferdinand Marcos, Jr addresses attendees at a luncheon at the World Economic Forum on 17 January 2023. Among the delegation from the Philippines were business tycoons and the government’s economic team, including finance secretary Benjamin Diokno and former Philippine president Gloria Macapagal-Arroyo. Image: Office of the President

Before Marcos Jr departed the Philippines for the Swiss city, he said in a press briefing that he was going to introduce MIF to global and business leaders during the WEF conference.

“I will draw attention to our efforts at building resilient infrastructure that bolsters our efforts to reinforce robust and resilient supply chains, ensure food security including its critical interlinkages with health and nutrition, while furthering climate-friendly, clean and green energy to power the Philippine economy,” he said earlier.

In November, lawmakers pushed for the MIF, in a bid to accrue profits of government assets. The following month, it was passed at the house of representatives, after the president certified it as urgent, but is yet to be deliberated upon at the Senate.

The bill was marred with criticism borne out of the country’s growing debt and a lack of surplus money. A main issue was with how earlier iterations of the proposed fund relied on state pensions, which critics said were irresponsible.

Observers also highlighted the lack of safeguards in the proposed fund and decried the speed at which the bill seeking to set it up had been passed through the legislative process. The fund was previously chaired by the president himself, though it is now helmed by the finance secretary, who will report to the president. Supporters of the bill include Marcos Jr’s allies like his first cousin, house speaker Martin Romualdez.

As it is, the country is drowning once more in debt. Which is the reason why many are questioning the wisdom of having a sovereign fund like the Maharlika Investment Fund when the country has no surplus to finance the fund or has not yet attained a certain level of fiscal stability.

MIF will not solve issues of a debt-ridden country: economist

The Philippines’ debt crisis is set to reach more than US$250 million by the end of this year, as the government spends on infrastructure, military modernisation and subsidy programmes to help mitigate rising prices of food and fuel.

“As it is, the country is drowning once more in debt. Which is the reason why many are questioning the wisdom of having a sovereign fund like the Maharlika Investment Fund when the country has no surplus to finance the fund or has not yet attained a certain level of fiscal stability,” said Dr Rene Ofreneo, president of Philippines-based non-profit Freedom from Debt Coalition, which monitors the country’s credit problem.

Most countries with sovereign investment funds like China and Singapore have either budget surpluses or are sitting on huge oil and mineral resources that are fully developed.

China leads the list of the biggest sovereign wealth funds globally with over US$1.22 trillion in assets. The China Investment Corporation (CIC) is financing the nation’s version of a 21st century Silk Road or the Belt-and-Road Initiative.

Investment gains from the Government of Singapore Investment Corporation (GIC), the nation’s central bank, and state investor Temasek Holdings Pte have been the biggest contributors to Singapore’s national budget since 2018.

The fund was developed for building up the industrial and economic capacity of the city state in the early decades of the 1960s, something which the MIF does not have as a visionary goal, added Ofreneo.

Other successful sovereign wealth funds are the Indonesia Investment Authority which sponsored the country’s big-ticket infrastructure projects during the Covid-19 pandemic, and the Abu Dhabi Investment Authority, generated by oil exports in the emirate.

Ofreneo, also former dean of the school of labour and industrial relations at the University of the Philippines, said he does not see the fund as a solution to the fiscal crisis. Even if the government gains support from rich nations and big multinational corporations, concrete dividends will take time to materialise because they will come mainly in the form of pledges.

On the other hand, economist Dr Michael Batu said in a statement that the fund’s introduction at the WEF will be an opportunity for the government to gather advice and learn the best practices in running sovereign wealth funds.

“It will help to improve and fine tune the current version of the bill while it goes to the Senate in January,” said Batu, assistant professor of economics at Canada-based University of the Fraser Valley.

The President can also gauge the interest of other countries depending on how it was received by the audience [at the WEF], he added.

This story is part of Eco-Business’ coverage of the World Economic Forum Annual Meeting.