Philippine Catholic church to divest from fossil fuels by 2025

The Catholic Bishops Conference of the Philippines, whose archbishops are major stockholders in the second biggest financier of coal in the country, declared that it will stop investing in banks that fund “dirty energy”.

By Hannah Alcoseba Fernandez
3 minute read Jan. 29, 2022
The Philippine Catholic Church will cease its involvement with banks that are funding coal and fossil gas by 2025 if they do not commit to divest from dirty energy, said one of the leaders of the assembly of Catholic bishops of the Philippines.
The Catholic church, which claims over 86 per cent of the near 110 million population as followers—the biggest in Asia—has a prominent role in the country, with its ability to influence public debate on issues ranging from politics to the environment. It has stirred protests against the recent lifting of the open-pit mining moratorium and has been vocal in its opposition to coal plant development in the country.
Speaking at a virtual press conference today, Bishop José Colin Bagaforo said, in a pastoral letter, that the Catholic Bishops Conference of the Philippines (CBCP) will use its position as shareholders of domestic banks to demand for policies and plans to “phase out their exposure to coal, fossil gas, and destructive energy in line with the 1.5°C ambition.”
“Without clear commitments and policies from these banks to divest from fossil fuels, we commit to withdraw all our resouces that are with them not later than 2025, and hold them accountable to their fiduciary duties and moral obligations as climate actors,” said Bagaforo, chairman of CBCP’s commission that promotes social justice.
The archbishop of Manila is currently listed as the fifth largest shareholder in the Bank of the Philippine Islands (BPI), which is the second biggest financier of coal in the country, with 62 per cent of its energy portfolio comprising of coal. In last year’s Global Coal Exit List (GCEL), figures compiled by German non-profit Urgewald, covering the period between October 2018-October 2020, state that BPI is providing US$444.82 million, in loans and underwriting for coal projects.
The archbishops of key archdioceses Jaro, Iloilo and Zamboanga are also listed as major stockholders of the bank, as of December 2021.
In a pastoral letter, the CBCP also said that it will steer resources of the Church to renewable energy and ecological restoration and protection and move away from extractive industries, including logging and mining.
“We will not accept donations of any kind from owners or operators and any representative of extractive industries especially coal, fossil gas, mining, quarrying, logging, regardless of scale of operation,” the letter read. 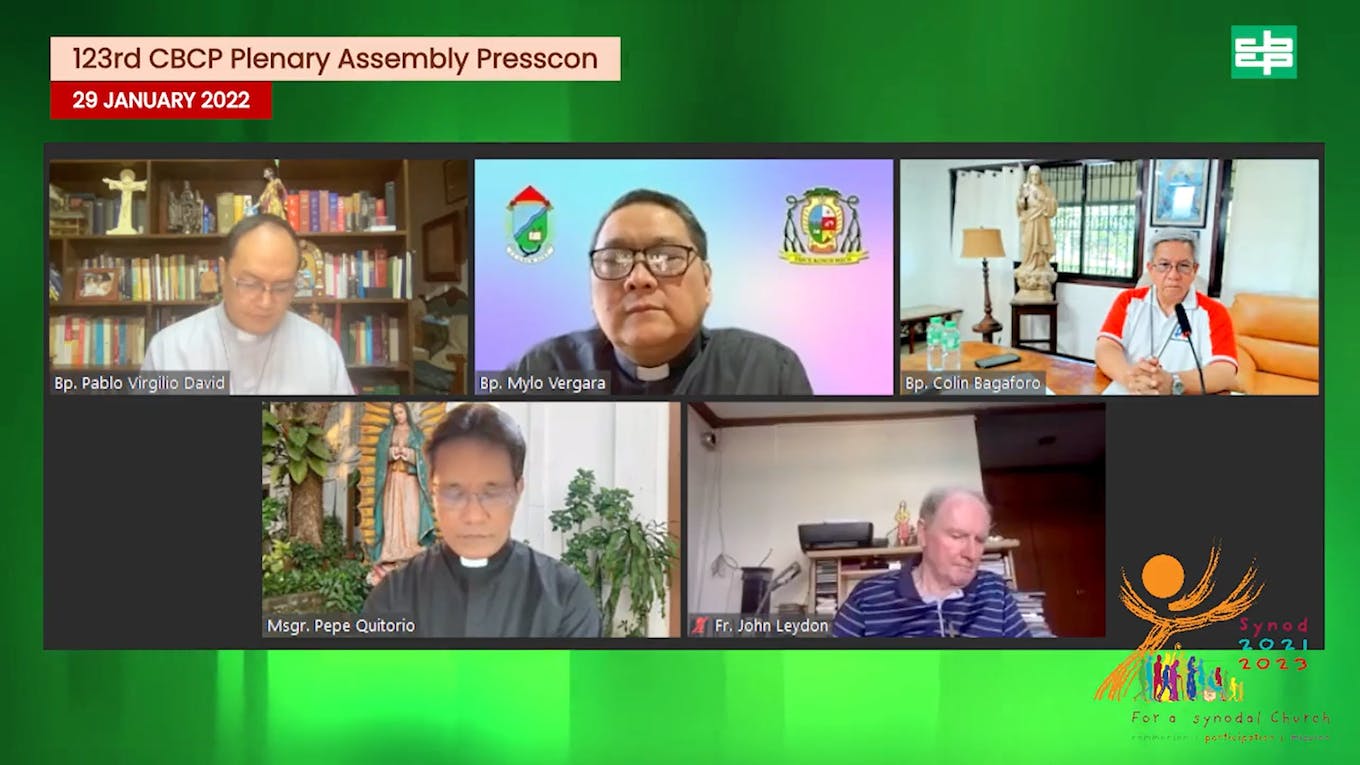 The Catholic Bishops Conference of the Philippines holds a press conference, launching a new pastoral letter on ecology, where it announces a deadline for coal divestment. Image: CBCP

Withdraw from Coal, a coalition of civil society groups, environmental advocates, and faith-based organisations, said it “hopes that these banks would finally listen to the voice of reason from the community of faith, in which belongs some of their biggest clients and stakeholders.”
“To date, the majority of Philippine banks found to have been linked to coal and fossil gas companies and projects remain mum on whether they are making an effort to turn their backs to dirty energy, while others have yet to come up with sufficiently ambitious policies and plans,” said Bishop Gerry Alminaza, convenor of Withdraw from Coal.
“We challenge them to take the CBCP’s Pastoral Letter on Ecology as an invitation to exhibit genuine leadership in advancing climate action by ending their fossil fuel funding and paving the path to a future powered by clean energy from renewables.”
In 2015, Pope Francis called on the world to phase out the use of fossil fuels in a 180-page encyclical on the environment. Since then, bishops of Belgium, Ireland, Austria and the Philippines have joined the global campaign to divest from fossil fuels.
Already signed up? Log in