A global study also found that people now regard businesses as more ethical and competent than governments in a year in which trust in institutions plummeted globally — nowhere more so than in China.

In a year plagued by a deadly pandemic, people were more worried about climate change than contracting the virus that has killed almost 2 million people, a global study by public relations firm Edelman has found.

Climate anxiety was also more severe than the fear of loss of personal freedoms and cyber attacks and hackers in 2020, a troubling year in which wildfires ravaged Australia and the American West, storms ripped through much of Asia, and scientists warned of an impending ice-free Arctic.

Only the fear of being unemployed was a more frightening prospect for people in 2020, according to the Edelman Trust Barometer, a study of more than 30,000 people in 27 countries.

The annual study of how much faith people have in institutions, which has been running since 1999, found that trust levels have plummeted as a result of the pandemic — and none more so than in government.

Businesses are now considered more ethical and competent than governments in 18 of 27 countries in the study, which was conducted between January 2020 and January 2021. 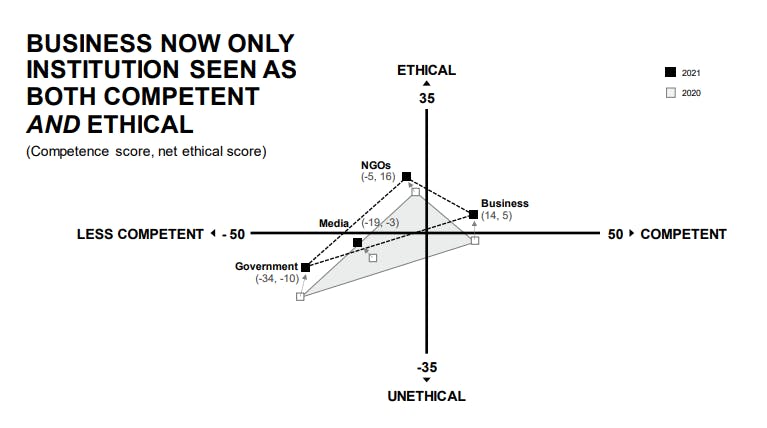 Business is now regarded as more trustworthy than government. Image: Edelman Trust Barometer 2021, a study of the views of more than 30,000 people in 27 countries.

The biggest drop in trust in government globally between between May 2020 and January 2021 was in South Korea, followed by the United Kingdom and China.

But trust in all institutions — government, non-government organisations, the media and business — fell the furthest in China, the source of the Covid-19 outbreak.

In Asia Pacific, trust in institutions also fell in India, Indonesia, Thailand, South Korea and Japan, while trust levels grew in Singapore, Malaysia and Australia, which saw the biggest trust gain in the study.

Trust in societal leaders also fell, even among scientists, who are the typically the most trusted members of society.

Trust in people in society fell in the year of the coronavirus, most starkly faith in scientists. Source: Edelman Trust Barometer 2021

The perception that the pandemic has deepened inequality was most stark in India, where people felt that those with less education and fewer resources are being unfairly burdened with the negative impacts of the pandemic.

The pandemic has also led to a dramatic increase in the urgency to address societal issues. A desire to improve healthcare was the most pressing concern, followed by addressing poverty, improving education and tackling climate change.