A Twitter outburst from a prominent journalist on how editors have been turning down “doom and gloom” climate story pitches from journalists, has sparked a discussion about climate reporting. The shift to solutions journalism is pandering to "privileged" readers tired of negative stories, but ignores the struggles of people on the front line of the crisis, some say.

The international media’s shift in focus from the problems caused by climate change to solutions overlooks the struggles of people in developing countries on the front line of the climate crisis, a prominent climate journalist has said.

Lou Del Bello, a Delhi-based climate reporter, vented her frustration on Twitter that Western newspaper editors have been turning down “doom and gloom” climate story pitches from freelance journalists because their “privileged” readers were tired of negative stories and were suffering from climate anxiety. 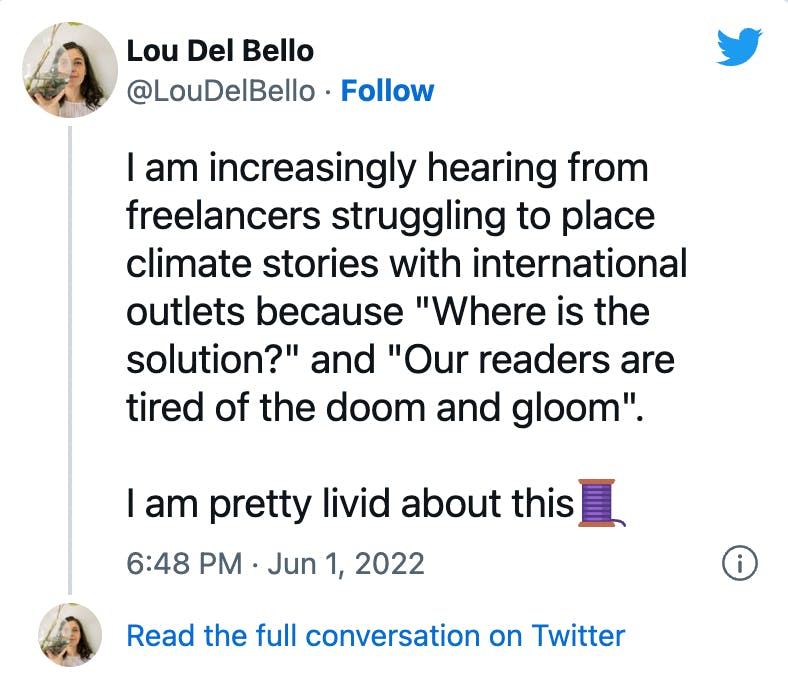 Newspaper editors were increasingly prioritising positive stories about solutions to give their readers a break from climate doomism, she contended.

“You know who is not tired of the doom and gloom? People living in places where complex problems are part of their daily lives, and who can’t afford to get tired of the negativity,” she said.

The international media was “failing to acknowledge the relentless reality of it [climate change] for the sake of their privileged readers’ comfort,” Del Bello wrote.

Her comments come a month after a study of mainstream and trade publications by PR firm Cognito found that coverage of climate solutions such as hydrogen, bioenergy and carbon capture had increased by 50 per cent over the past year.

Del Bello argued that not all climate stories worth telling have a solution, and if this were the case, climate change would easily be solved.

You know who is not tired of the doom and gloom? People living in places where complex problems are part of their daily lives, and who can’t afford to get tired of the negativity.

“These ‘solution’ angles apply to a tiny fraction of the real life stories that matter, but they take up an increasingly big slice of the climate content that the public – particularly in rich countries – gets to read,” she said.

This was a problem the international media had created while trying to “crack the hard nut” of finding a formula for engaging people with climate-related content, she said.

“Editors increasingly ask for solution stories, and journalists who need to pay the bills increasingly end up pitching ideas with that straightforward angle – leaving out those more complex narratives that are harder to sell.” 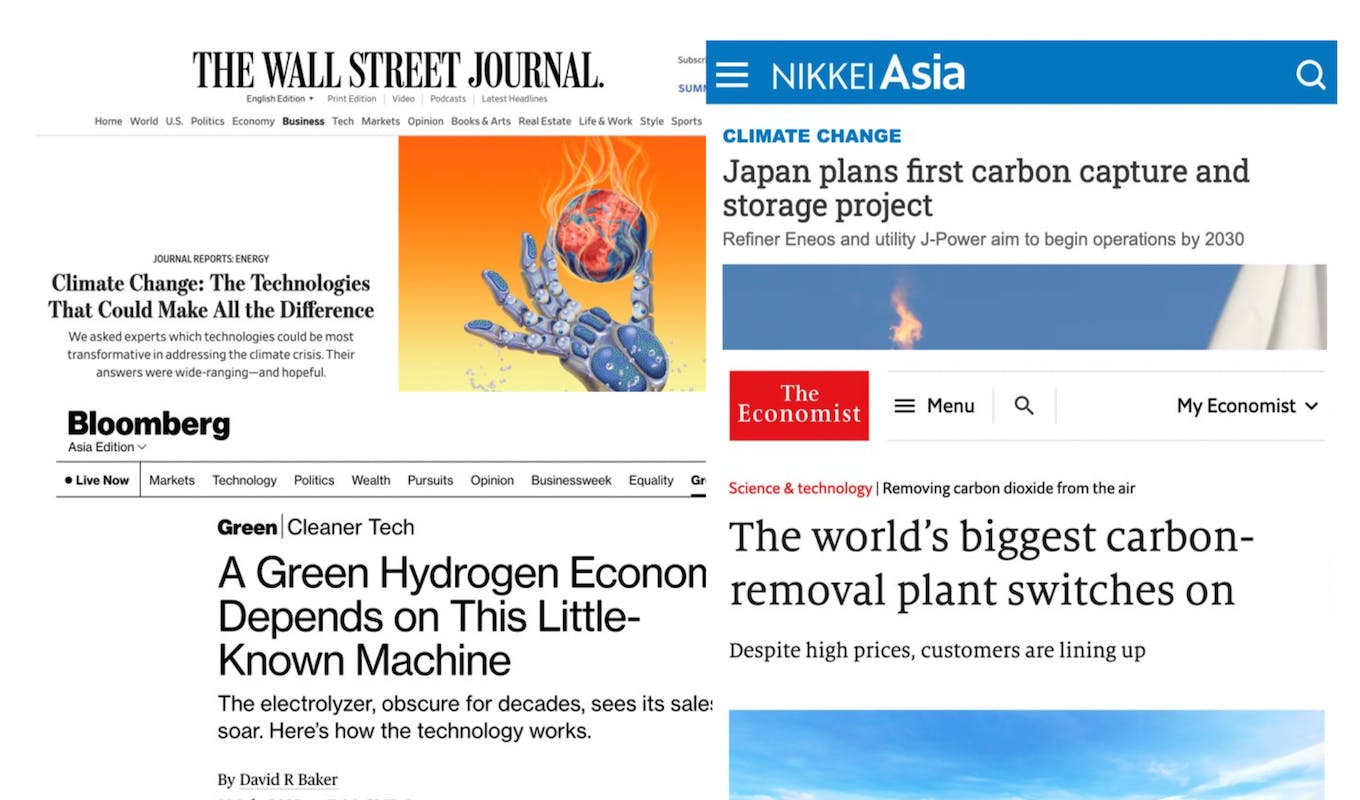 ‘Solution’ angles have increased by 50 per cent over the past year, according to a study by Cognito. Images: wsj.com, nikkei.com, bloomberg.com. economist.com

Del Bello is special projects editor of nonprofit media group The Third Pole and a former environment correspondent for Bloomberg.

Peter Yeung, a Hong Kong-based freelance journalist who writes for BBC among other outlets, said at an event hosted by Solutions Journalism Network that editors should not aim to include a solutions angle in every climate story, as that can mean simplifying complex issues and suggest that there is always a solution.

Journalists need to watch out for stories pitched by public relations firms that are sold as solutions, he added. “Evidence of the proof of impact is a crucial part of a solutions journalism story, as are limitations.”

Press freedom is an issue covering climate change in some countries. Trang Vu, a Vietnam-based freelancer and educator, recently interviewed Vietnamese journalists who work on national newspapers, who told her that they are expected to “provide a glimpse of a climate solution, preferably one proposed by the local authorities.”

“Coverage of [climate] challenges [in Vietnam] is okay, but stories should not end on a too-negative note,” she told Eco-Business.

Stories about ongoing crises have always been hard to sell to editors – the same is true of war, health and migration, said James Lorenz, who pitches environment stories to editors in his role of executive director of Action Speaks Louder, a non-profit that holds firms accountable for their climate promises.

“People often want to pitch a story thinking because something is important, it’s news. It isn’t. That’s only a part of it. News by its nature is not just important – it’s new, intriguing, different, or surprising,” he told Eco-Business.

The urgency of a rapidly closing window to secure a liveable future should be on the front pages every day, but the reality is there are fewer journalists and mainstream media’s readership is declining, so there’s more pressure on a smaller market to win reader interest, Lorenz said.

Editors should do more to communicate the scale of the climate crisis and what the implications are to everyone. However, some media, such as Nikkei, Associated Press and the Guardian, are increasing climate coverage, noted Lorenz.

“The Australian Financial Review would barely touch a climate finance story a few years back. Now it does so regularly, albeit grudgingly on occasion,” he said.

Lorenz’s observation is backed up by Cognito’s study, which finds that coverage of climate change in the mainstream and trade press has increased by more than 50 per cent over the past year, as extreme weather events have intensified around the world.

Stories about the effects of climate change, such as those on droughts, floods and mass migration, outnumber solutions stories by three to one, the study of publications including The Economist, Bloomberg, Nikkei and South China Morning Post found.

Lorenz added that a large chunk of the media is “cravenly pro-fossil fuels and anti-climate action”, for instance outlets owned by Rupert Murdoch’s News Corporation, which include American TV channel Fox News, British newspaper The Sun and Australian tabloid The Daily Telegraph.

However, despite its historical climate-denying stance, News Corp has ramped up its climate coverage in recent years, and last year the company launched a campaign in Australia playing up the need for the world to cut emissions by 2050.

Even right-wing Mail Online, the world’s most-read online English-language newspaper – which has run frontpage stories about people enjoying ice cream on the beach during this summer’s heatwave in the United Kingdom – has acknowledged that human-induced climate change is responsible for the record-breaking temperatures.