A large NGO collective has called on APP's business partners to walk away from deals with the Indonesian paper giant, which it says have failed to live up to a commitment to avoid using intimidation, violence and abuse to manage social conflicts.

The latest chapter in a long land dispute between a company owned by Indonesian paper company Asia Pulp and Paper (APP) and a village in Sumatra has raised the ire of a large coalition of environmental and human rights groups.

Some 90 local and international NGOs have called on business partners of APP to suspend deals with the company after APP-owned industrial pulpwood firm PT Wirakarya Sakti (WKS) was alleged to have sprayed herbicide on crops belonging to farmers in the village of Lubuk Mandarsah in Jambi province, Sumatra.

The incident comes five years after a 23 year-old farmer was killed by security guards working for WKS, which led to an outcry from environmental groups and cast a cloud over APP’s sustainability efforts. Tensions flared again last year when WKS reported a farmer to the police for encroaching on the company’s land, while a villager accused WKS of harvesting too close to their farm. 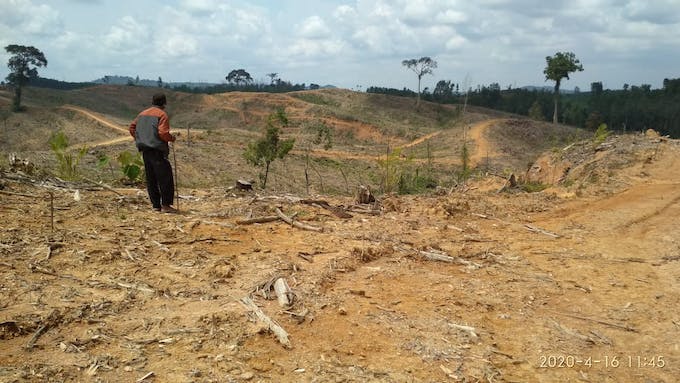 Lubuk Mandarsah community leader and chairperson of the Sekato Jaya Farmers Group, Jais, told Eco-Business that WKS had continually broken commitments to work with the community, and the spraying of community land with poison, which took place on 4 March, was further evidence of the company’s intimidation tactics.

APP—which has engaged in high-profile corporate social responsibility projects in Indonesia and Singapore to provide and distribute medical equipment and hand sanitiser amid the ongoing Covid-19 pandemic—has said in a statement that the drone-spraying incident has been investigated and resolved following a mediation process.

The company said that the sprayed area was outside the agreed boundaries set aside for community livelihood and much smaller than was alleged—affecting 10-15 young oil palm trees rather than a claimed 2 hectares. It added that it would engage with the community to ensure that any future issues are amicably resolved.

In an open letter sent to businesses including multinational consumer goods firm Nestlé as well as smaller buyers in Europe and North America, NGOs including Greenpeace, Auriga and Wahli called for a halt in dealings with APP until the company had made “radical changes” across its business.

APP pledged in a Forest Conservation Policy (FCP) made in 2013 to fairly resolve conflicts with communities over land use. The NGO group says that APP is “far from being on track” to resolve its legacy conflicts and its forestry operations continue to create new violations.

According to mapping analysis conducted by Environmental Paper Network, 107 villages or communities are in active conflict with APP affiliates or its suppliers, covering an area of 350,000 hectares of disputed land.

APP has said it is on track to resolve just under half of outstanding conflicts with concessions and suppliers.

Analysis by environmental activists in April last year concluded that an additional 602 conflicts are looming, if APP doesn’t stay true to the free, prior and informed consent (FPIC) approach to land use it agreed in its conservation pledge.

APP’s chief sustainability officer Elim Sritaba acknowledged that social conflicts may arise in the future, and said that processes including FPIC would be used. “We do not deny that there are challenges in finding a fair and equitable resolution to every single conflict, but we are working to put in place best practices and remain open to help from third parties who may have expertise to complement our own,” she said.