China's Belt and Road Initiative could negatively affect up to 24 million people in Myanmar, put forests at risk, and break international law, said a new report by the World Wildlife Fund (WWF).

Up to half of Myanmar’s population live in areas that could suffer environmental damage from two giant highways unless the ecological risks are considered, according to a new report from the World Wildlife Fund. The planned roads will form part of China’s continent-crossing network of overseas infrastructure known as the Belt and Road Initiative (BRI).

“We’ve estimated about 24 million people could be affected by this infrastructure project—and negatively affected if it is not carried out in a way where you are taking into account the potential impacts on areas that help provide clean water, protection against floods, landslides, and so on,” report author Hanna Helsingen told chinadialogue.

Environmentalists and lawyers have voiced fears that Myanmar’s fledgling environmental protection laws, which date from 2015, are insufficiently robust, transparent or enforced to prevent adverse impacts on forest cover, water management and people’s livelihoods. 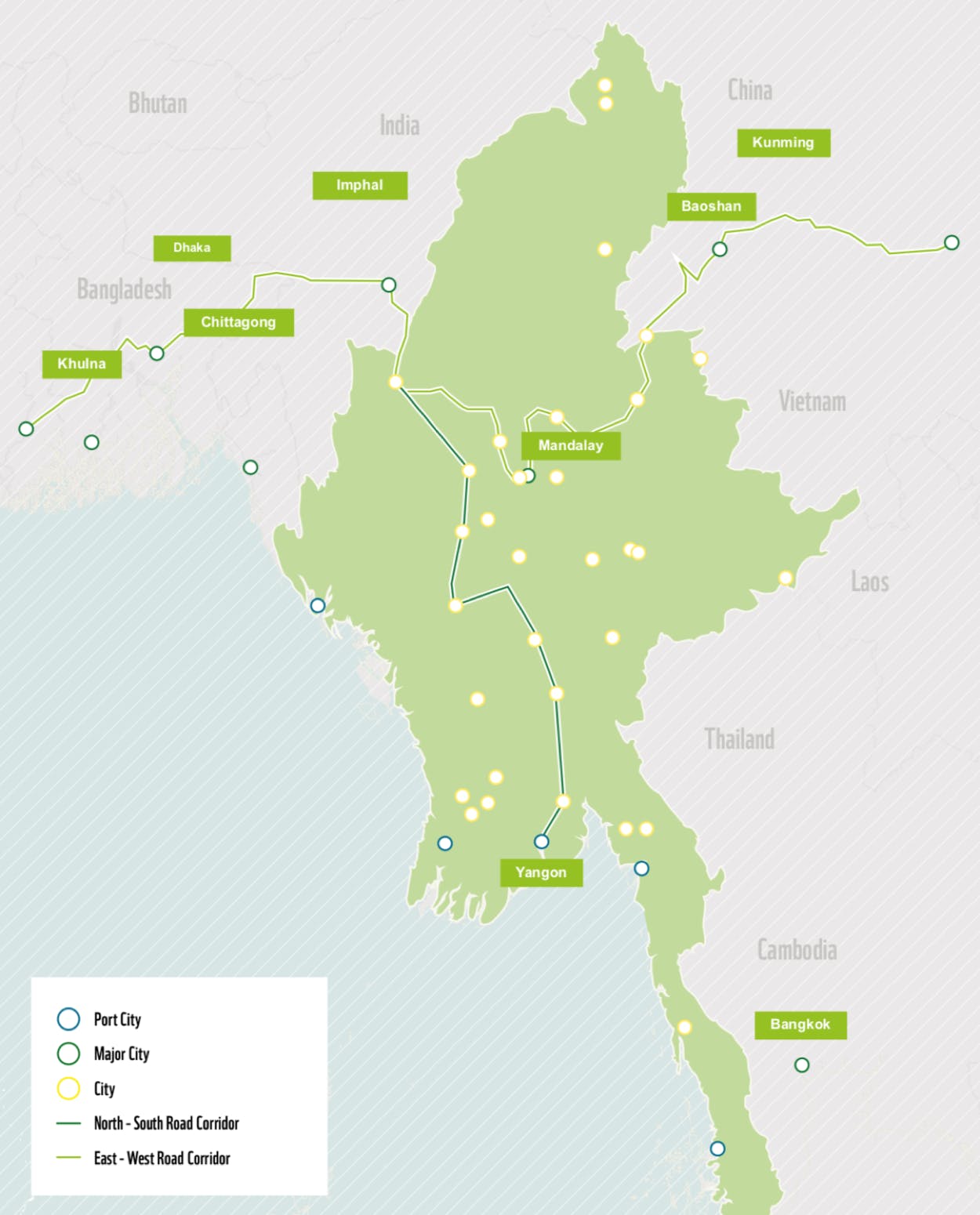 “Myanmar doesn’t yet have the institutional infrastructure and capacity required to ensure projects comply with its nascent environmental protection laws,” said Sean Bain, legal advisor with the International Commission of Jurists (ICJ).

WWF’s report concentrates on two highway corridors that are still at the early planning stage. They run east-west and north-south, crossing important riverine and forest ecosystems.

Other BRI projects in Myanmar include the existing oil and gas pipeline from the Rakhine coastline up to China’s Yunnan province, the US$10 billion Kyaukphyu Special Economic Zone, as well as proposed rail and road links.

The report warns that forest degradation is a major risk from the road corridors.

“Opening up previously undisturbed areas in itself can be enough to impact water quality and quantity, especially in areas where water levels fluctuate and where forests play an important role in storing and releasing water,” said Helsingen.

Many people in Myanmar depend on subsistence agriculture, and the country is vulnerable to natural disasters such as flooding, drought and cyclones.

“Looking at the impact of the floods in 2015, it’s clear that agriculture was one of the most affected sectors,” said Helsingen.

Deforestation has been credited as a factor in landslides and flooding that occurred in 2015, which led to salination of valuable rice paddy land. Wildlife is also threatened by the loss of natural forest corridors that allow free movement, and ecological processes to function properly.

“If there was a framework, it would need to be public to be meaningful. We have observed a similar lack of transparency with infrastructure projects in Myanmar sponsored by India, Thailand, Japan and Korea,” she said.

Sean Bain, of the ICJ, pointed out that few investors have demonstrated a genuine commitment to comply with even the most basic procedural aspects of Myanmar laws, such as environmental impact assessments (EIAs).

EIAs conducted to date in Myanmar have lacked transparency. Assessments have rarely been published, and the Myanmar government has not run the disclosure and consultation processes required by law.

There is a lack of transparency surrounding BRI projects in Myanmar. The Irrawaddy reported in May 2017 that the governments of Myanmar and China signed a memorandum of understanding (MoU) on Cooperation within the Framework of the Silk Road Economic Belt and the 21st Century Maritime Silk Road Initiative (to give the project its full name).

The contents of the MoU have not been made publicly available.

“EIAs conducted to date in Myanmar have lacked transparency. Assessments have rarely been published, and the Myanmar government has not run the disclosure and consultation processes required by law,” said Bowman.

“Myanmar is not strictly requiring projects to apply the ‘mitigation hierarchy’ to impacts,” she said. This approach to developing infrastructure seeks first to avoid biodiversity loss wherever possible. The next step is mitigation, before restoration or rehabilitation, and finally offset.

Nor do Myanmar’s laws meet the standards devised by international agencies for countries to follow.

Any mega projects that go ahead are likely to be implemented unlawfully, causing “irreparable damage to Myanmar’s environment, its people and also to the reputation of Chinese investors in future,” said Bain.

Bowman argues that problems could be avoided if infrastructure is planned and designed in line with Myanmar’s EIA framework, with studies done to the standards of the International Finance Corporation (IFC) and World Bank, including undertaking consultation and revisions to avoid, reduce and mitigate impacts.

“Currently there is a lack of environmental governance in Myanmar, mainly attributable to weak government capacity, and this situation doesn’t seem likely to change any time soon,” said Bowman.

Furthermore, she sees, “no proactive interest in transparency and genuine ‘greening’ from project developers.” This compounded by a lack of awareness on the part of communities and other stakeholders, as well as an absence of data on biodiversity and “ecosystems services“.

While the main responsibility lies with the Myanmar government, investors—including on government-to-government projects—should not cut corners on sustainability: “All those involved in these projects should be proactive in applying international standards, and being transparent, rather than waiting to be regulated,” said Bowman.

She added: “The Myanmar government also needs effective assistance to help them manage projects of this nature in a transparent manner for the long-term benefit of the country.”

For WWF, the hope is simply that engagement on the projects can begin early.

“We do not have to repeat the same mistakes as so many other countries have done, where they only looked at economic costs and benefits as the basis for planning and design,” said Helsingen.

“I think that’s the main opportunity here and hopefully that’s an opportunity that the Chinese and Burmese governments will take,” she said.