Most believe that emissions have dropped since 2005 — when they have grown by 50 per cent, according to a survey conducted at the recently-concluded Asia Pacific Energy Week. The findings reveal "a major gap between perception and reality".

A survey of energy executives in Asia Pacific has revealed a curious level of optimism in how the energy transition is progressing in the region, though that confidence might have been misplaced.

The study of 470 executives — mostly expert and key decision-makers across the energy sector — at Asia Pacific Energy Week in March found that most delegates believe that greenhouse emissions have fallen since 2005, by about 29 per cent on average.

Emissions have actually increased by about 50 per cent between 2005 and 2020, with the biggest increases in carbon pollution coming from Asian countries, primarily China and India.

APAC energy executives surveyed also said they believe that emissions will be 40 per cent lower than in 2005 by the end of the decade, as the energy transition gathers pace. This projection is “highly optimistic and unlikely”, according to the report.

Commissioned by Siemens Energy, the Energy Transition Readiness Index assesses the region’s energy priorities and the progress made in shifting from fossil fuels to clean energy sources. On the survey findings, it said that the mistaken perceptions might have come from the fact that countries are pushing hard on decarbonisation in various sectors and are seeing results.

The executives, however, have overlooked how increasing demand for energy due to strong economic growth could have counteracted these developments, leading to a net increase in emissions overall, said the report.

“Asia Pacific Energy Week revealed a major gap between perception and reality when it comes to carbon emissions. Systemic changes are urgently required to speed up the region’s energy transition.” 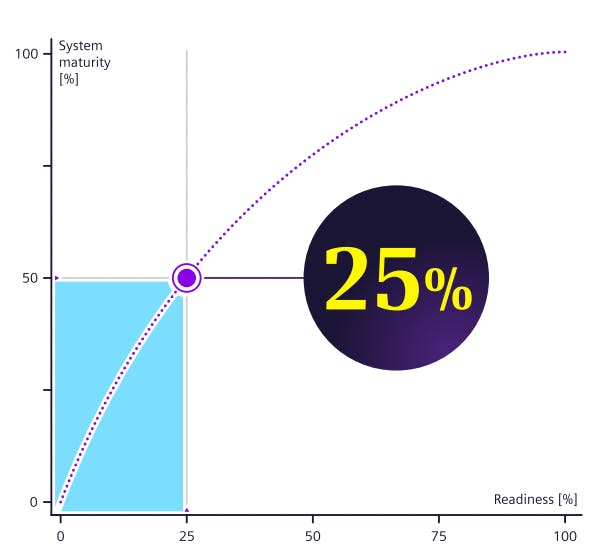 The study was done in the same week that analysis by the International Energy Agency (IEA) revealed that atmospheric carbon levels have reached an all-time high, driven mainly by fossil fuel consumption in Asia.

It also concluded that energy transition in Asia Pacific is still in its infancy, with a readiness index score of 25 out of 100.

The index is based on the views of energy executives on the priorities needed for the energy transition, such as the acceleration of renewables and the phase-out of fossil fuel. 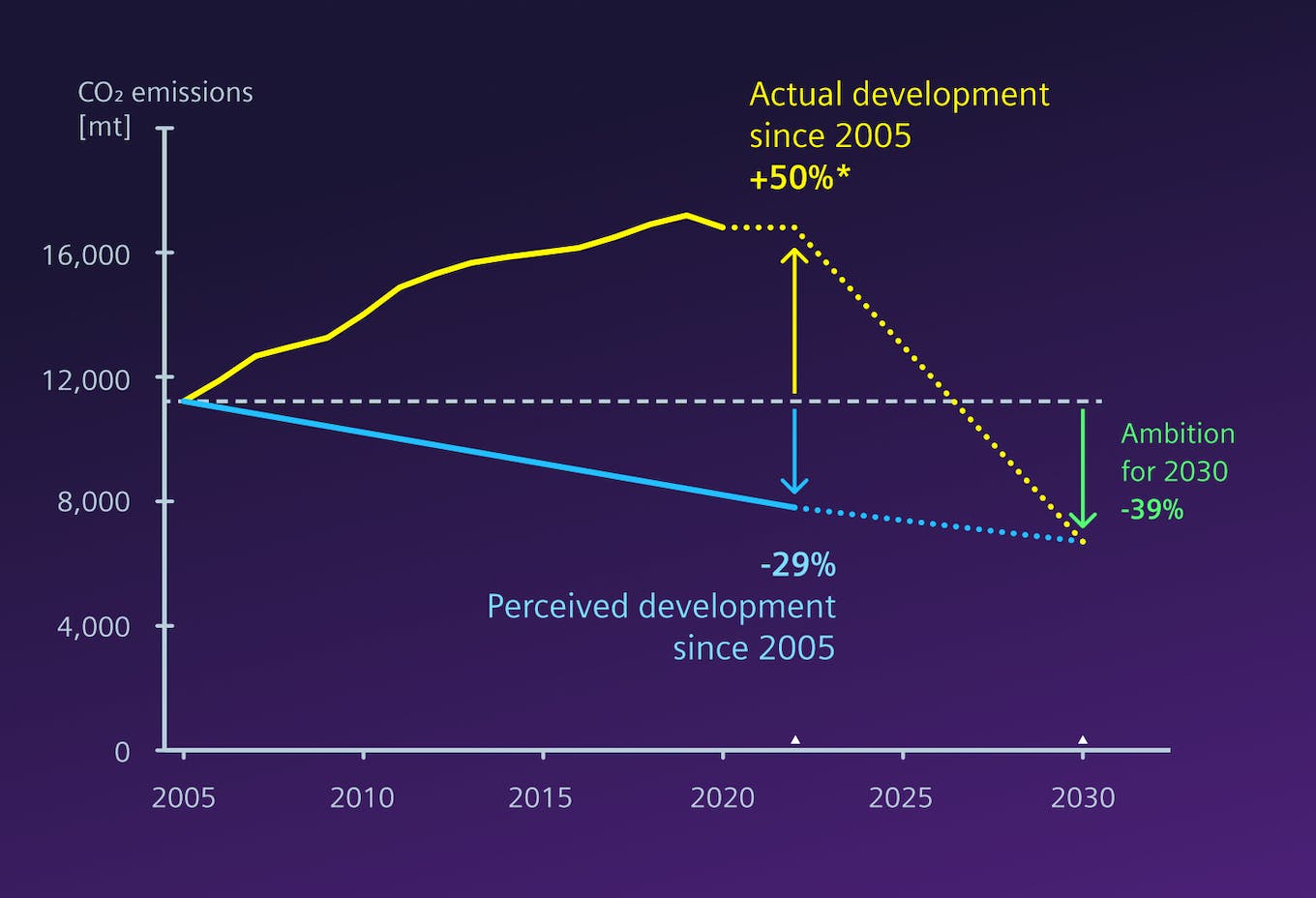 Energy executives in Asia Pacific believe that carbon emissions have dropped by 29 per cent since 2005, when actually they have increased by 50 per cent. Delegates were asked: what is the level of CO₂ reduction in your country today and what will it be in 2030 compared to 2005? Image: Asia Pacific Energy Transition Readiness Index

“25 per cent is a solid foundation, but there is still a very long way to go. Asia Pacific needs to take all its energy priorities more urgently, while global climate efforts must involve the region more in the future,” said the report.

Why do energy executives think emissions are falling?

Samuel Morillon, senior vice president of Siemens Energy Asia Pacific told Eco-Business that there could be reasons behind the perception of declining emissions. Such optimism comes from “the clear shift towards the importance of net-zero, bolstered by support and endorsement from states and corporates”, he said.

Governments including China, Korea, Japan and India have made commitments to achieve net-zero emissions over the coming decades. So, too, have some of the region’s most influential corporations, such as Malaysian oil giant Petronas and Chinese e-commerce giant Alibaba.

Morillon noted that Asia Pacific has committed unevenly to the phase-out of coal and been inconsistent in implementing low carbon technologies. “This makes for a case of two steps forwards, one step backwards,” he said.

While some Asian countries, such as Korea, Vietnam, Indonesia and Singapore, committed to phase out coal at the COP26 climate talks last year, others — China and India — did not. Asia Pacific consumes 80 per cent of the world’s coal, the most polluting fossil fuel.

Edgare Kerkwijk, managing director of Urban Renewables, a Singapore-based energy investment firm, said net-zero commitments may have given a misleading impression of climate action in the region. “The actual implementation of these commitments is still far behind what needs to be done,” he said.

A March study by the United Nations found that action that Asia-Pacific has taken to reduce carbon emissions has regressed significantly, since the launch of the UN Sustainable Development Goals (SDGs) in 2015.

The latest warning from UN head António Guterres — that it is “now or never” to limit global warming — and a report on the worsening effects of global heating from the Intergovernmental Panel on Climate Change have not received the media attention they deserve in Asia, Kerkwijk added.

Christophe Inglin, managing director of Singapore-based solar power firm Energetix, said government pledges to reduce emissions per dollar of gross domestic product (GDP) rather than absolute emissions may have also given a misleading impression of emissions cuts in Asia.

“Reducing emissions per dollar of GDP [as countries such as Malaysia and Thailand have pledged to] is debatably an improvement in efficiency, but we can also achieve this by transitioning from energy intensive manufacturing sectors to less energy intensive service sectors,” he noted.

The priorities and roadblocks of Asia’s transition

The Energy Transition Readiness Index found that energy executives believe the expansion of renewables and the decarbonisation of industry are the top two priorities for the energy transition in Asia, while solutions such as carbon capture and storage technologies were rated as low priority.

Survey respondents rated policy as the most important factor driving the energy transition in Asia Pacific. They also called into question how just the transition is, with a significant proportion deeming the transition to be unfair for workers’ rights and livelihoods affected by the shift to clean energy.

Policy is the most important factor driving every aspect of the energy transition. Participants also see funding as a major requirement for most priorities [click to enlarge]. Source: Asia Pacific Energy Transition Readiness Index

Kerkwijk agreed that policy was a key factor for the energy transition in Asia, particularly for the uptake of renewable energy. A “fair, level playing field” is needed for renewables, which are still held back by restricted access to the grid and heavily subsidised fossil fuels, he said.

Funding for renewables is abundant, but the viability of renewables projects remains an issue, Kerkwijk added.

Inglin commented that while Asia Pacific has been less enthusiastic at subsidising renewables compared with earlier adopters like the European Union, Japan and the United States, “enthusiasm for renewables is picking up.”

“People are realising that it now makes economic sense and they can save serious money by installing renewables. The global surge in fossil fuel prices has helped to wake people up [to clean energy],” he said.