Mind the hype: Despite huge potential, solar energy in SE Asia is behind a cloud

Sunny Southeast Asia has double the solar energy potential of Northern Europe, but the market hype is not living up to the reality on the ground. Thailand leads and Indonesia lags in a sector direly needed to fight climate change and meet the region's ballooning energy demands.

About 40 per cent of this potential solar power could come from Indonesia, but the uptake of solar in Southeast Asia’s largest economy is lagging in a region that—despite being twice as sunny as Northern Europe—is struggling to live up its enormous potential, experts said at the inaugural Unlock Solar Capital Asia conference in Singapore on Thursday.

“Indonesia is swimming in free sun and wind resources. It makes no sense to ship in diesel to fuel dirty generators to provide power for its 18,000 islands. But that’s exactly what the country is doing,” said Assaad Razzouk, chief executive of clean energy projects developer Sindicatum Sustainable Resources, in a characteristically confrontational keynote presentation.

“Frankly, renewable energy is nowhere to be seen in Indonesia,” he said.

Indonesia is Southeast Asia’s fifth largest market for solar energy and, for its size and potential, the laggard of the region.

Thailand is by a wide margin the leader with 62 per cent of Southeast Asia’s total installed capacity of 3.5 gigawatts. The Philippines and Malaysia are the region’s second and third largest solar markets, followed by Singapore. 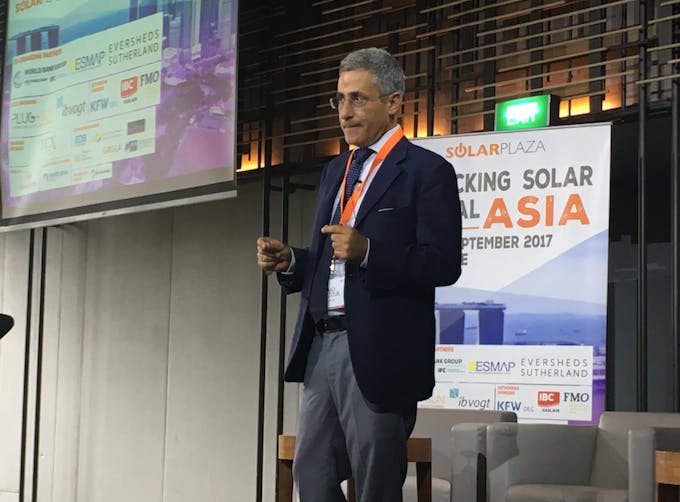 Razzouk: The US$150 trillion capital markets are failing to back renewable energy

Solar uptake has been muted in Vietnam to date, despite “an enormous amount of hype” about the country’s solar potential, Razzouk said.

Meanwhile, Vietnam—like Indonesia—continues to invest heavily in coal-fired power stations to meet its growing energy demands, Razzouk told his audience of energy executives and financiers from around the region.

Malaysia is remarkable for the fact that the number of solar panel installations has actually declined in recent years, Razzouk said. This is partly the result of the end of a feed-in tariff that allowed solar panel owners to sell their energy back to the grid.

We have to find a way to accelerate renewable energy uptake in Southeast Asia, because the hype is simply not consistent with the reality.

The region is aiming to produce 34 per cent of its energy from renewable sources by 2025—a total of 61 gigawatts. However, almost every solar market in Southeast Asia is still in “emerging phase”, Reindl said.

One exception is Thailand.

The Kingdom’s big push towards renewables is largely a consequence of a dwindling supply of natural gas, which is expected to run out within a decade, noted Hemant Mandal, senior energy specialist, clean energy, advisor services, South Asia, International Finance Corporation.

Easy access to favourable financing schemes and the low cost of solar systems have helped boost Thailand’s solar sector, which is highly competitive and dominated by local players.

The government has become more “selective,” he said, and much of the growth in solar in Thailand now comes from independent projects, such as factory and warehouse owners leasing their rooftops. 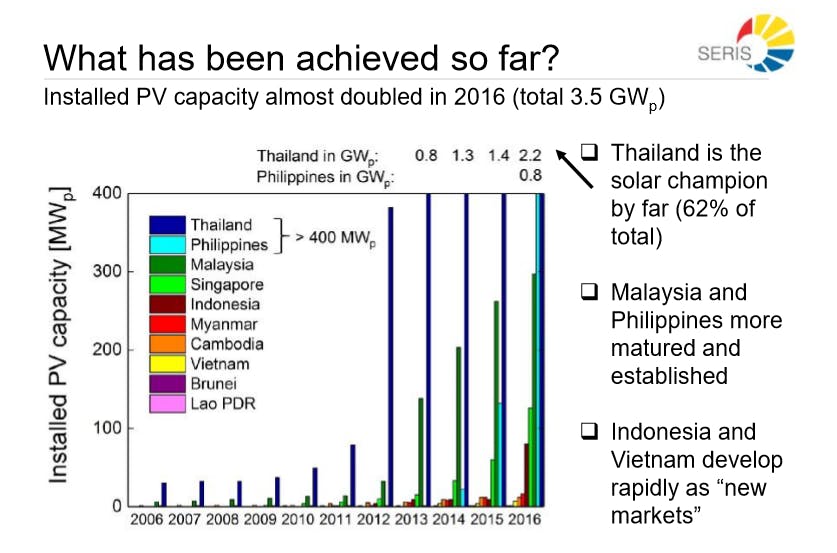 Indonesia has the furthest to go. The country will need to add 3 gigawatts of solar annually if it is to help achieve this goal, Reindl said. 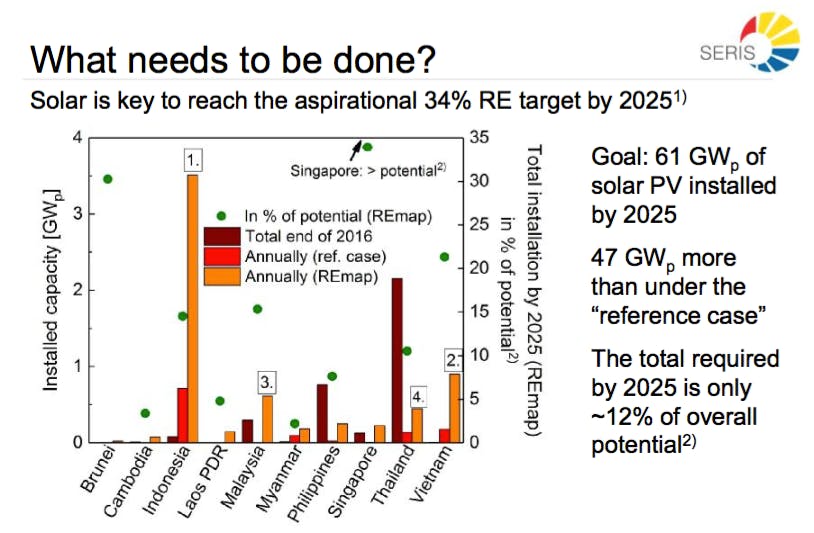 The work that needs to be done for Asean to reach its 2025 renewable energy target. Source: REMap 2020, A Renewable Energy Roadmap, IRENA, Asean Centre for Energy

While a number of Asean countries, including Singapore, Cambodia, Laos, the Philippines, Thailand and Vietnam have reached grid parity—that is, the point when solar costs the same or less as conventional fossil fuel, and can compete on the national grid—government subsidies for fossil fuels are holding the sector back, said Reindl.

Fossil fuel subsidies worldwide total $325 billion, while renewable energy subsidies are worth less than half that ($150 billion), according to International Energy Agency data.

As well as scrapping fossil fuel subsidies, feed-in tariffs offer a good way to speed up the adoption of solar, Reindl said. Now, there’s increasingly a move towards auctioning and net metering, as well as or instead of feed-in tariffs, to boost adoption, he added.

Although Asean’s renewables target may seem overly ambitious, Reindl pointed out that Germany had installed 1 gigawatt of solar energy capacity in a single month—the month before the country decreased a feed-in tariff for the first time.

“The speed of installation is not a factor. It’s purely about economics and the regulatory framework,” he said.

To limit planetary warming to within 2-degree Celsius and avoid the worst consequences of climate change, $1 trillion needs to be invested annually on renewable energy to electrify the world, Razzouk said. But at the moment, there’s a shortfall of $670 billion a year being invested in renewables, he said.

However, current global trends—such as the decline of oil and coal, the phasing out of fossil fuels-powered cars, as was recently announced in China, and the falling price of solar—point to “massive changes” that are disrupting the global energy market.

From now until 2040, an estimated US$10 trillion will be invested in renewable energy—some 82 per cent of the total to be spent on new energy generation over the next 23 years, Razzouk said.

“Southeast Asia has to do what it can to get its fair share [of the US$10 trillion]—but most countries in this region are doing very, very little about it,” he said.

“We have to find a way to accelerate [renewable energy uptake] in Southeast Asia, because the hype is simply not consistent with the reality on the ground.”

“When you think about renewable energy and electrification in Southeast Asia, think disruption, think Black Swans. We have to think ahead of the market,” he said.