For the first time in 2017, more than half of the electricity generated in the UK came from low-carbon sources, Carbon Brief analysis shows.

The milestone means that, between them, nuclear and renewables generated more electricity in 2017 than all fossil fuels combined. Within this total, wind alone generated more than twice as much electricity as coal, supplying more power in every month except January.

The UK electricity sector passed a string of other symbolic markers in 2017, from its first coal-free day since 1882 to new records for wind and solar generation. This lead NGO WWF to dub the year the “greenest ever” for electricity – with prime minister Theresa May tweeting her support.

Nevertheless, power sector emissions remain far above what will be needed to meet legally-binding UK carbon targets, while progress in decarbonising the rest of the economy is limited.

Last year, Carbon Brief’s analysis revealed that windfarms had generated more electricity than coal in 2016. This year’s analysis is based on a combination of data sources, chiefly half-hourly electricity generation data compiled by Dr Iain Staffell, lecturer in sustainable energy systems at Imperial College London, for the Electric Insights website. See the notes at the end for more on how the analysis was done.

The most striking finding is that low-carbon sources, for the first time, supplied more than half the total. The share from nuclear and renewables has doubled between 2009 and 2017, to reach just a shade over 50.0 per cent.

Fossil fuels supplied 47.5 per cent of generation in 2017, down from 75.4 per cent in 2010. The lion’s share of today’s fossil supply is from gas, with coal generation having plummeted over the past five years (see below for more on this). 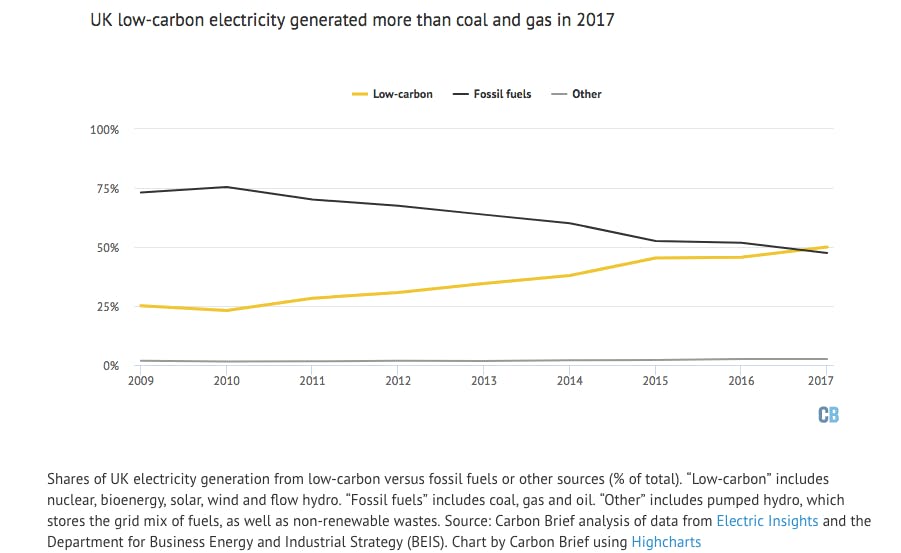 The rise of low-carbon electricity supplies has been rapid, driven by subsidies for renewables.

The government recently ruled out additional low-carbon subsidies in the medium term, beyond those already agreed or promised. However, rapid cost declines for renewables mean subsidy-free deployment might become increasingly possible, even if long-term contracts might still be needed.

Over the past year, the largest increase in generation for a single source came from wind, which was up 31per cent to 49 terawatt hours (TWh) in 2017. The was due to capacity increasing by a fifth, but also due to more favourable wind speeds, up 7per cent in the first 11 months of the year.

However, nuclear remains the single largest source of low-carbon electricity in the UK – and the second largest source overall. It generated 70TWh in 2017, a figure that is virtually unchanged since the early 2000s, when a number of old reactors were closed down.

The government hopes to secure new nuclear capacity to replace the remaining fleet, which is mostly due to close in the 2020s. However, progress has been slowed by financial problems at several of the firms hoping to build this new capacity and protracted talks over subsidies, or even more direct financial support from government.

Meanwhile, plans to usher in a new generation of “mini nuclear” small modular reactors were recently set back after ministers deferred a decision on further funding and published a report suggesting such reactors would – at least initially – be more costly than their larger cousins.

The other renewables also generated more in 2017 than in 2016. Solar rose 11 per cent, on rising capacity, while biomass increased 4 per cent. This is despite a fuel supply problem at Drax, the UK’s largest power station, which has converted half its capacity to burn wood pellets.

It’s worth adding that the 31TWh of biomass electricity comes from a wide range of sources. Large sites burning wood, such as Drax, have become controversial, due to uncertainty over how long it will take for new, growing trees to offset raised carbon emissions at the power plant, particularly if trees are harvested exclusively to generate electricity.

In a recent guest article for Carbon Brief, Prof Sir John Beddington, the UK government’s chief scientific adviser between 2008 and 2013, wrote: “A reasonable estimate [for this case] might be that every kilowatt hour of wood at least doubles the emissions over a period of 30 years that might otherwise occur even if the alternative were fossil fuels.”

However, the likes of Drax supply only around three-fifths of the biomass electricity generated in the UK. The remainder is from smaller sites burning poultry litter, landfill gas or gas from anaerobic digesters, among other things.

Notably, coal generation fell by a further 25 per cent in 2017 to 23TWh, discussed in more detail below. Meanwhile, gas generation also fell, down 7 per cent to 134TWh, well below its 175TWh output in 2010 . Nevertheless, gas was the single largest fuel by far, supplying some 40 per cent of generation in 2017.

Gas-fired electricity has direct emissions roughly half those from coal. Along with falling demand – down around 10per cent since 2010 – and the rise of renewables, gas-to-coal switching helps explain recent rapid reductions in the carbon intensity of UK electricity (grammes of CO2 per kilowatt hour).

According to Electric Insight’s estimates, the carbon intensity of UK power fell by 10 per cent to 237gCO2/kWh in 2017, half the 508gCO2/kWh in 2012. (Note that this estimate covers all electricity supplied in the UK, including imported power from France and the Netherlands. In 2017, the UK sourced 15TWh from imports, up from zero in 2010. Last year saw a slight decrease on 2016, after a raft of nuclear plants were taken offline in France for repairs.)

Despite having contributed to the recent decline in emissions from electricity generation, gas is still a fossil fuel, with direct emissions at the power plant of around 400gCO2/kWh. Indeed, given an overall intensity that is now well below that of gas, the UK power sector would become more carbon intensive if gas meets a larger share of the mix.

Gas emissions are also some four times larger than the 100gCO2/kWh which the Committee on Climate Change (CCC) suggests will be needed by 2030, in order to help meet the UK’s legally-binding carbon targets.

By implication, and combined with the government’s pledge to phase out coal power by 2025, the UK must generate no more than 25 per cent of its electricity from gas by 2030.

Indirect emissions in the gas supply chain, such as from leaking wellheads or pipes, impose additional constraints on the extent to which gas can continue to be part of the UK electricity mix – and the wider UK energy system.

The latest decline in coal-fired electricity generation in the UK completes an 84 per cent fall over the space of just five years, between 2012 and 2017.

The fall has been so dramatic that solar generated more electricity than coal on 182 of 365 days last year, with wind exceeding coal on 302 days. There were also 1,226 half-hour periods with zero coal generation, the equivalent of 25.5 days.

There were 3 full days with zero coal, including the well-publicised first coal-free day since the industrial revolution, on 21 April, but also the 1st and 29th of October. Coal’s share of UK monthly generation  fell to a record low of below 2per cent in April, averaging 2 per cent across the five months from April through August (see next section). 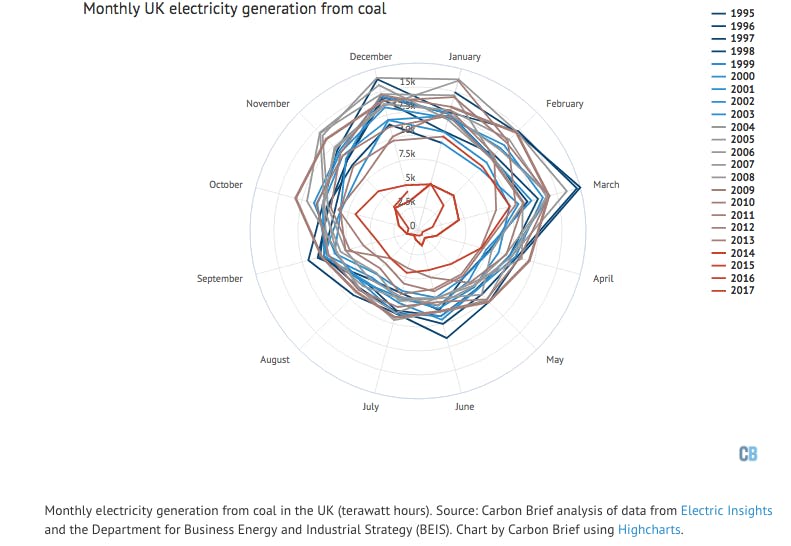 The leading protagonist in coal’s demise has been the UK’s top-up carbon tax, the carbon price floor. This has raised the carbon price for the power sector to around £23 per tonne of CO2 in 2017, increasing the cost of coal generation, relative to lower-carbon gas.

At the latest budget, the government committed to maintain a steady carbon price for the power sector until coal has been phased out. The government has yet to set out how it will ensure its phaseout plans are guaranteed, if the carbon price and market conditions fail to do the job. It also remains committed to the capacity market, which keeping coal plants open as an insurance policy against insufficient electricity supplies.

Other major factors in coal’s demise include EU air pollution rules, shifting wholesale prices for coal and gas, and the closure of three large coal plants in 2016.

The 84 per cent coal reduction over the past five years accounts for around 80 per cent of the fall in overall UK carbon emissions over the same period. This highlights how little has been achieved in other parts of the economy, with transport emissions essentially unchanged since 1990, for example.

While power sector emissions must fall furthest, CCC analysis suggests the UK will only meet its legally-binding carbon budgets with emissions cuts across the whole economy.

The rise of renewables means many more zero-carbon kilowatt hours are entering the UK electricity mix, but it also increases daily and seasonal variations in supply.

Wind, solar and hydro are all notable for their seasonal variations, shown in the monthly generation data below (upper chart). Solar, obviously, generates the bulk of its annual output during the summer, while wind and hydro are more productive in the stormier winter months. These annual cycles are complementary, as the lower chart below shows.

It’s worth adding that these seasonal variations remain relatively muted compared to the seasonal cycle of electricity demand, which rises in the winter months due to the need for extra heat and light. This cycle is clear in the output from coal, which rises in winter to match demand. (This winter increase for coal also reflects higher heating demand, which raises gas prices.)

Whereas coal or gas generation can be easily turned up in response to changing demand, the variability of renewable generation comes at the whim of the weather and seasons.

It is sometimes argued that this imposes prohibitive “system costs” on the wider electricity sector. However, the best available evidence suggests these costs will remain relatively low, even if wind and solar output doubles from today’s levels.

In the medium- to long-term, the variability of renewable output will pose challenges for the grid, with flexible generation likely to be needed to fill in the gaps.

This will probably remain true even if the government aim for a “smart power” system sees the UK get better connected with its neighbours, add battery storage and cut power use flexibly in response to changing supply and demand.

The variability of wind and solar output is magnified on a day-to-day or hour-to-hour timescale, as the chart below shows. As for monthly and seasonal variations, however, these day-to-day changes are of a similar magnitude to the rise and fall of demand between weekdays and weekends. (Click and drag to zoom in on a shorter timescale to see this weekly cycle). 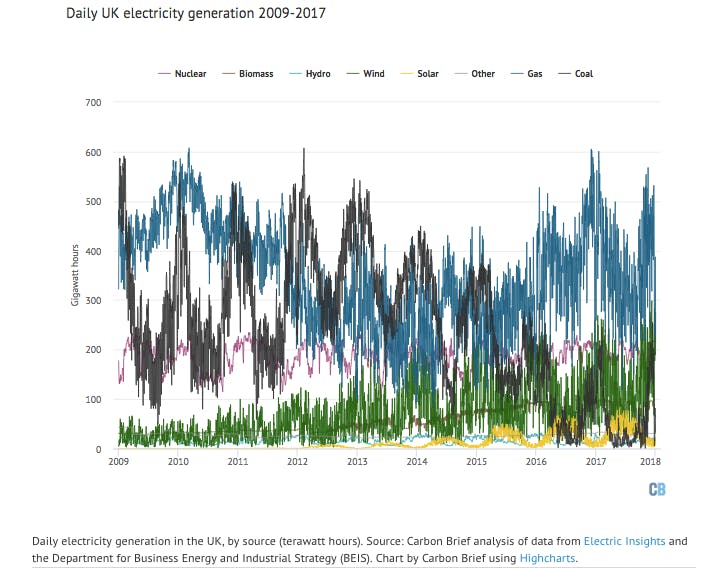