Looking for eco-friendly burial options? Lay to rest in a bookshelf-coffin

The NGO Forget Thee Not has designed a bookshelf that can be turned into a coffin. In a heavily regulated industry and a place with strong traditional funeral customs, will people be receptive to the idea of a sustainable coffin?

In a small plant-filled office overlooking a sports ground lies Hong Kong-based eco-funeral provider Forget Thee Not’s latest “sustainable” funeral product: a coffin that can be converted into a bookshelf.

Placed between a model-sized home made from recycled paper, a display of ribbon flowers, and a tall potted plant, the rectangular coffin is a light brown colour with an indentation shaped like a sword running down the middle of the casket cover.

Dr Fan Ning, who is a surgeon and the chairman of Forget Thee Not, says the aim is to spark an interest in eco-friendly coffin products by creating something that is creative, durable, and combines modern ideas of sustainability with traditional Chinese customs.

“Back in the day, when people were approaching the elderly stage, they would buy a coffin and put it in their homes. They would go to the coffin shops and try the coffin by sleeping in it. Back then they had big houses, so they could put the coffin inside their house and use it for storage purposes,” says Dr Fan.

“So we wanted to create something based on this traditional Chinese concept of bringing the coffin into the modern living environment.”

A video from Forget Thee Not shows five people taking apart pieces of the casket and assembling planks of wood into a functional bookshelf. Using nails and hammers, the coffin is slowly transformed into a tall, sturdy-looking bookshelf, almost like a 3D jigsaw puzzle. The bookshelf has four shelves and a V-shaped gap running down the middle of the back of the shelf.

Forget Thee Not is one of the few funeral homes advocating for the use of eco-friendly caskets in Hong Kong, a densely populated city of almost 8 million people where burial plots are scarce and over 90 per cent of the dead are cremated. The organisation also promotes the use of recycled materials in funeral services, such as replacing fresh flowers with ones made from silk, using regular clothing instead of the white attire worn in traditional funerals, and opting for smaller model-size homes, cars and money made from recycled paper which is often burned by the grieving family in traditional funerals.

The bookshelf-coffin, made in partnership with Lingnan University, is made from “high-quality birch and spruce plywood”. When burned, the coffin emits the same amount of greenhouse gases as traditional coffins made from medium-density fibreboard (MDF), a man-made, engineered wood product. But Dr Albert Ko Wing-yin from the university who designed the coffin, says the multi-purpose aspect of the design makes it a sustainable product in a place where there aren’t many green options.

“When someone passes way, people often buy a coffin made from a very high quality material. The new coffin is only used for three to four days and then it is burned. It’s difficult to justify this environmentally,” says Dr Albert.

“It’s a lifelong bookshelf that can convert into a coffin at the last part of your life. For the whole life journey with the user it is actually a bookshelf. It’s only after you pass away it becomes a coffin. If you look at it this way, it’s very cost-effective and environmentally friendly because a bookshelf can easily last 20-30 years or even longer versus a coffin which you would pay a high price to use for three to four days.”

The dual-use coffin is currently a prototype that costs US$1200, but Dr Albert says the cost will be “cut by 50 per cent by production, and his team at Lingnan university is also considering other materials like honeycomb cardboard which would emit less greenhouse gases when burned.

This is Forget Thee Not’s third “eco-friendly” coffin design. In 2014, the company launched  a “reusable coffin” in an effort to reduce carbon emissions produced from cremation and promote the use of less materials. The coffin had a reusable hardwood “outer coffin”, and removable “inner casket” made from honeycomb-core cardboard, in which the body is kept for cremation. It has also previously launched a coffin made from water hyacinth plants.

Thinking out of the box

Around the world, eco-friendly caskets have been growing in popularity as more people are seeking greener end-of-life options. A Netherlands-based start-up is now offering coffins made from compostable mushroom fibres. Britain’s Prince Philip was reportedly buried in a wool coffin. In Hong Kong, however, where reverence for ancestors is expressed through traditional funeral customs, an environmentally-friendly send-off has faced a number of challenges.

One of the challenges is overcoming traditional ideas associated with caskets. Coffins often represent different values, religious backgrounds and stories across different cultures. In Hong Kong, heavier, larger, and expensive coffins are often favoured in traditional funerals. They are seen as a sign of prestige and a way to honour the dead, especially if they are elderly.

One of the eco-friendly coffin brands offered by Forget Thee Not is LifeArt – an Australian company which opened its first factory in Hong Kong last year with plans to tap into the larger funeral industry in Asia. LifeArt manufactures colourful, customisable cardboard coffins made from recycled paper and natural fibres that “emit 87 per cent less greenhouse gases” than chipboard or fibreboard coffins. Wilson Tong, chief representative of LifeArt, says eco-friendly coffins sometimes clash with traditional customs in Hong Kong. 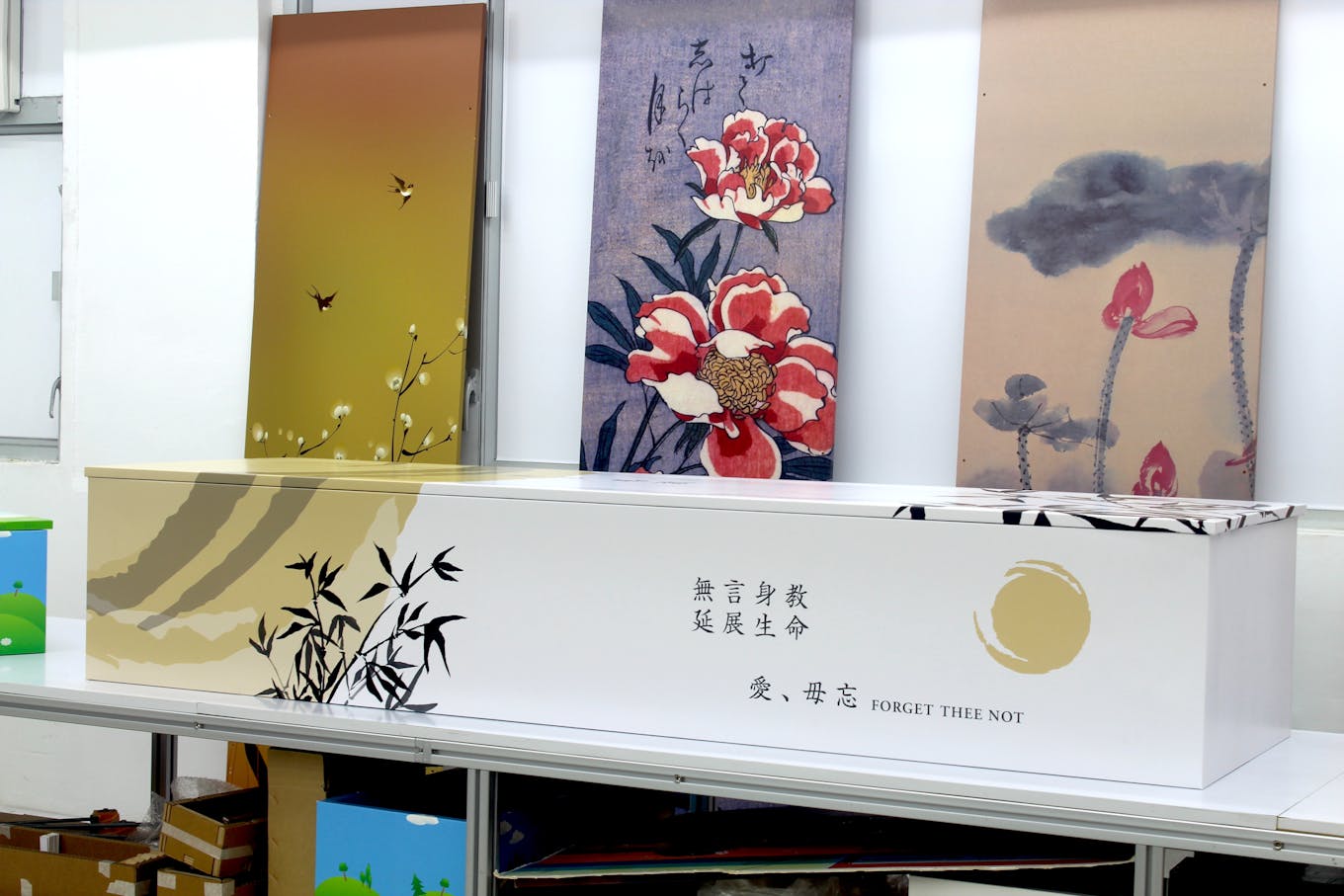 A customisable cardboard coffin made by LifeArt. Image: LifeArt

“Hongkongers generally think cardboard is cheap, so believe that using it for a coffin is not respectful to the loved one. For generations they have been using so-called wood, but it wasn’t actually wood. Over 90 per cent of caskets in Hong Kong are not wood, they are artificial wood,” says Tong.

Additionally, Tong says funeral directors in Hong Kong have also been resistant to the idea of eco-coffins; thinking they are less profitable.

“The funeral directors are not always open to it. Their understanding of green funerals is that their profit will be taken away. They don’t appreciate green funerals, because green funeral means fewer burials, and less big caskets to sell,” says Tong.

Out of the seven funeral homes listed on the Food and Environmental Hygiene Department’s (FEHD) website, the regulatory body that oversees the funeral industry in Hong Kong, only one sells LifeArt’s caskets: Po Fook Memorial Hall.

Eco-Business requested an interview from the seven funeral parlours, but did not receive a response. Out of the seven, four have listed “eco-friendly” casket options on their website. Universal Funeral Parlour says on its website that it offers “environmentally friendly caskets”, but does not specify what they are made from. Meanwhile, funeral homes under the Tung Wah Group of Hospitals (International Funeral Parlour, Diamond Hill Funeral Parlour and Global Funeral Parlour) say they offer eco-coffins made from honeycomb cardboard.

Another challenge is overcoming the regulatory hurdles facing new funeral products. Forget Thee Not says its “reusable coffin” was not permitted by the FEHD. According to Forget Thee Not, the FEHD does now allow coffins to be removed from crematoriums. Under current rules, the inner casket would have to be removed from the entire coffin and taken to the crematorium separately. At the time of its launch, the company was hoping the FEHD would waive the rule.

Despite the challenges, advocates remain hopeful.

Dr Fan says Forget Thee Not chose to work with Lingnan university to create its latest product, the Bookshelf-coffin, so that it accommodates Hong Kong’s legal requirements. He also added the furniture-coffin concept fits into traditional elements of Chinese culture. He believes that attitudes are slowly shifting, and people are starting to accept that eco-friendly coffins can complement traditional Chinese culture.

“To enter a traditional market, to change people’s minds, takes time. But I see the progress,” says Dr. Fan