Limiting global warming to 1.5C would have ‘significant economic benefits’

Holding global temperature rise to 1.5C would lead to significant economic benefits by the end of the century, a new paper suggests.

Holding global temperature rise to 1.5C would lead to significant economic benefits by the end of the century, a new paper suggests.

It finds that per capita GDP would be 5% higher by 2100 if temperatures are stabilised at 1.5C above pre-industrial temperatures rather than 2C.

The negative economic impacts are expected to fall disproportionately on the world’s poorest countries, the lead author tells Carbon Brief, with the disparity larger at 2C than for 1.5C.

Economic analysis underpins several key aspects of climate policy, such as calculating the social cost of carbon and the creation of carbon markets.

But modelling the economic impact of different amounts of warming has proven tricky. Lord Nicholas Stern, author of the landmark 2006 Stern Review on the economics of climate change, has called for a new generation of economic models, cautioning that current ones seriously underestimate the potential impacts of dangerous climate change.

The new paper uses a novel approach to the problem, based on the climate simulations known as the ‘Half a degree Additional warming, Prognosis and Projected Impacts’ (HAPPI) project, rather than Integrated Assessment Models (IAMs).

IAMs are often used to assess the economic impacts of climate change. However, the authors say there are increasing doubts about them as they rarely tested against observations. They are also sensitive to the chosen “damage function”, a mathematical simplification that tries to describe the relationship between economic growth and climate change.

Moritz Schwarz, associate with the Climate Econometrics project at the University of Oxford and co-author of the paper, tells Carbon Brief:

“Conventional damage functions are widely criticised in the literature, because they are not based on actual historical/empirical data but are little more than guesses.”

The new paper, published this week in Philosophical Transactions A, is one of the first to measure the economic impacts of the 1.5C target of the Paris Agreement.

It looks at the impact of warming on future yearly economic growth rates. In an effort to base these on historical data, the research models the past relationship between GDP growth and climate variables such as temperature and rainfall. It then combines this relationship and the HAPPI climate simulations to project how growth may be affected by warming of 1.5C and 2C, versus a situation with no warming.

The results show significant differences between 1.5C and 2C of warming.

For 2C compared with no warming, lower annual growth is seen for a large set of countries, as the chart below shows. 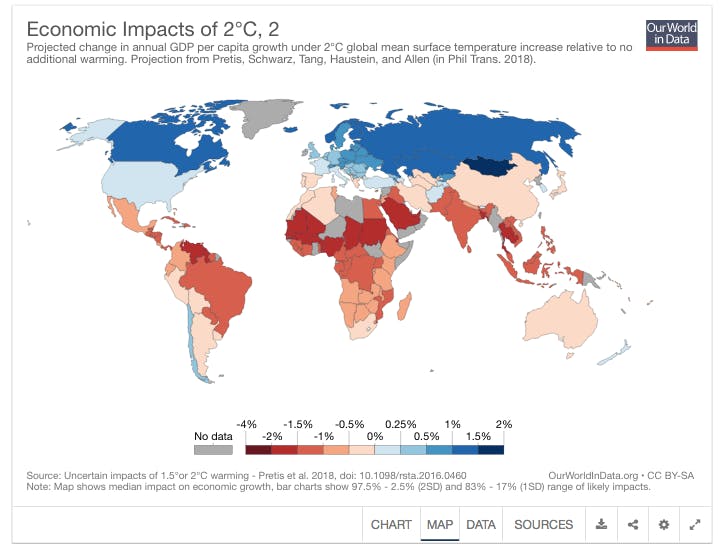 In contrast, the impacts of 1.5C warming on yearly growth rates are found to be “near indistinguishable” from no warming, on a global average basis. While the median estimates for many countries, shown in the chart below, are negative for many regions, the values are not statistically different from zero. 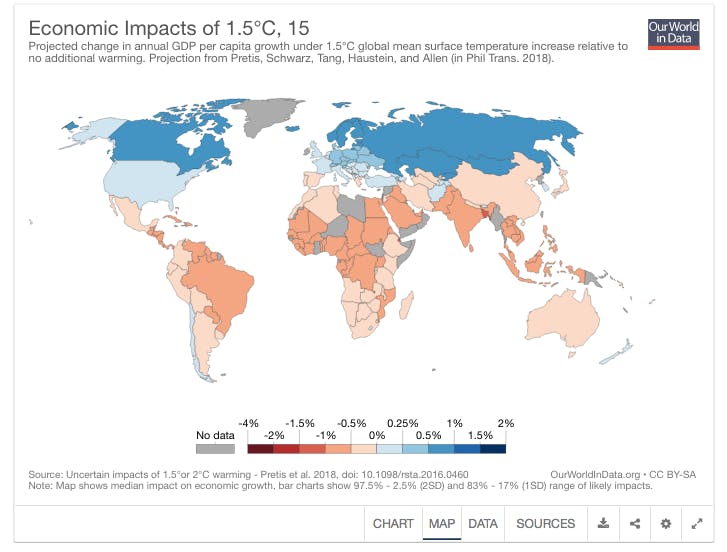 Next, the researchers look at the cumulative impact of warming on total per capita GDP in 2100. This effectively adds up the changes to yearly growth rates, described above. They assess this impact relative to per capita GDP in a set of base scenarios known as Shared Socio-economic Pathways (SSPs), due to be covered in depth in a forthcoming Carbon Brief article.

They found significant effects for both 1.5C and 2C of warming, in comparison to a scenario with no additional warming. By 2100, per capita GDP would be a median of 8 per cent lower with 1.5C. This increases to a median fall of 13 per cent with 2C of warming.

This means statistically they cannot rule out that the projected impacts of 1.5C relative to 2C are similar, the paper says. However, the median projected growth in GDP per capita is lower under 2C than under 1.5C warming for the majority of countries, the authors say.

Amir Jina, an assistant professor in public policy at the University of Chicago, who was not involved in the study, says its findings generally agree with his recent research. This found substantial uncertainty, damages that are unequally distributed and non-linear increases in economic damages as temperatures rise.

However, he emphasises that the headline 5% difference between 1.5C and 2C should be stated cautiously, since it is not statistically significant and there is substantial overlap. He tells Carbon Brief:

“We could state the result in a different way – that we think that if there are damages evident at even 1.5C, we should be taking that into consideration with urgency and exploring our mitigation options.

“Put yet another way, we could say that the lack of a significant difference between 1.5C and 2C shows why we should be interested in this type of paper – it tries to quantify these targets that have been set as convenient goals rather than rigorous scientific benchmarks.

“In that context, saying that 2C warming is worse than 1.5C warming, in the median, is not too surprising. Quantifying both of these is useful for policy, however.”

As the maps above show, the projected impact on economic growth is larger in the tropics and southern hemisphere, even though the northern hemisphere is expected to see more rapid warming. Previous studies based on historical relationships between temperature and growth have also found the tropics to be more vulnerable to climate variations, the paper says.

The new research also suggests that countries which are poorer now will see larger reductions in per capita GDP growth due to climate change. The effects here are larger for 2C than for 1.5C. Felix Pretis, co-director of the Oxford University Climate Econometrics project and lead author of the paper, tells Carbon Brief:

As the paper notes, such findings are relevant to ongoing international negotiations on loss and damage, which focuses on how the locked-in consequences of human-caused climate change should be dealt with.

It’s worth adding here that there are also debates around the use of GDP – a measure of monetary value of all the finished goods and services produced in a country – as the main measure of national prosperity and wellbeing.

As noted above, the paper uses historical relationships between climate variables and economic growth to estimate their future linkage.

Pretis says it is therefore important to keep in mind that the projections do not account for potential adaptation. He tells Carbon Brief:

“While we control for extreme events and shocks (through a new method called indicator saturation), our projections implicitly assume that this relationship between climate and economic outcomes remains the same into the future.

“It may well be the case that as we adapt to climate change, economic growth may become less dependent on climate variability. In a way, our projections provide a counterfactual scenario of what we might observe if we do not adapt or do not take mitigating efforts.”

On the other hand, the projections do not include the impacts from sea-level rise, extreme climate events such as storms or “tipping points”. These “may well increase any damages dramatically,” says Pretis.

The paper notes that major nonlinear changes to the climate system, such as tipping points, are not expected to occur below 2C. However, Pretis adds, the elephant in the room is then “unknown unknowns”. He says:

“If our models fail to capture important determinants of the relationship between growth and temperatures, or about future climate change, then of course there is additional uncertainty, however, this uncertainty is unquantifiable here.”

Jina similarly emphasises the inherent risks of uncertainty. He says:

“This paper shows that there is a risk of damages significantly higher than the median damages in both warming cases, and that is something that we should care about.

“For any investment anywhere in the world, we care about tail risk and incorporate that into decisions, and this paper shows that even at low levels of warming, there is substantial risk of bad outcomes. As a policy maker, I’d want to take that seriously.”

These new results add to the existing literature on the economic impacts of warming. In its fifth assessment report, published in 2014, the Intergovernmental Panel on Climate Change (IPCC) said the scale of the impact of climate change on economic growth is unclear. It said:

The IPCC’s upcoming special report on 1.5C, set to be published in October 2018 ahead of COP24 in December, is expected to include look at comparisons of the socio-economic implications between limiting warming to 1.5C and 2C, such as estimates of the effects on GDP.