Is this the greenest community centre in Singapore?

Industrial size food composters, robot cleaners and Internet of Things solutions to keep track of visitorship and maximise manpower use – newly launched integrated community centre, Our Tampines Hub, is a beast in the east of sustainability.

A little known fact about one of Singapore’s most environmentally friendly and progressive towns is that it was named after a tree, the Streblus elongatus. Known as Tempinis to locals, the trees were once found in abundance in the area that is now a bustling residential area and living laboratory for green lifestyle technology.

Tampines town is a sustainability leader on many fronts. It recently installed refrigerators in the communal space at the bottom of a public housing block to collect food donations to feed needy residents. Opened in 2011, Tampines Eco Green park was built with recycled material and is the first public park in Singapore with an eco-toilet, in which bacteria and wood shavings are used to decompose human waste into compost.

More recently, however, the town located in the east of Singapore has become home to Our Tampines Hub (OTH), the first integrated community centre and a beacon of sustainability. Owned by government statutory board People’s Association, OTH is running trials for a few programmes that will lighten its environmental footprint and wants to encourage environmental awareness among the youth in Tampines, according to director Suhaimi Rafdi.

Phase one was launched in November last year with a public service centre, shops, auditorium and hawker centre now open to public. The second and third phases will introduce a bowling alley, karaoke studio, stadium, performing arts centre and swimming pools, and are expected to wrap up before the year end to service the more than 239,100 public housing residents in Tampines, one of Singapore’s most populous towns.

Suhaimi said that OTH can act as a “living laboratory” for community centres. Its tried-and-tested technologies could be adopted by the next four community centres up for redevelopment by the People’s Association, though none on the same scale given their much smaller plot size and visitorship. The four are: Punggol, Bedok, Sembawang and Yishun.

Here’s how OTH is making Tampines one of the most eco-friendly residential zones in Singapore.

One programme that is up and running is OTH’s food waste programme that consists of two one-tonne digesters that turn food waste from the supermarket, restaurants and hawker centre into organic fertiliser and non-potable water, which is used to clean OTH facilities and the machines themselves. The fertiliser is distributed to Tampines residents and gardening clubs once a month.

Suhaimi cited the growing concern over food waste as a reason for purchasing the two digesters, which cost half a million Singapore dollars in total. At present OTH generates 700kg in food waste every day and Suhaimi estimates this amount to double to 1.5 tonnes a day once OTH is fully open.

But that figure is expected to plateau once the centre gets its educational programmes for students off the ground, and teaches them to be mindful of the waste they generate, said Suhaimi. He added that OTH has begun welcoming students on school excursions to see how the digester works. Use of the on-site digesters is also written into the tenancy contracts for food-and-beverage and supermarket tenants to ensure buy-in.

While Suhaimi said it was too early to gauge the impact of the eco digesters, he said OTH has saved on savings are likely to made in haulage costs, transportation fees, carbon emissions and landfill space. The goal is to pass on savings made to tenants in the form of rebates. “We’ll tabulate our savings on an annual basis and they will be distributed by per square foot of net lettable area,” explained Suhaimi. 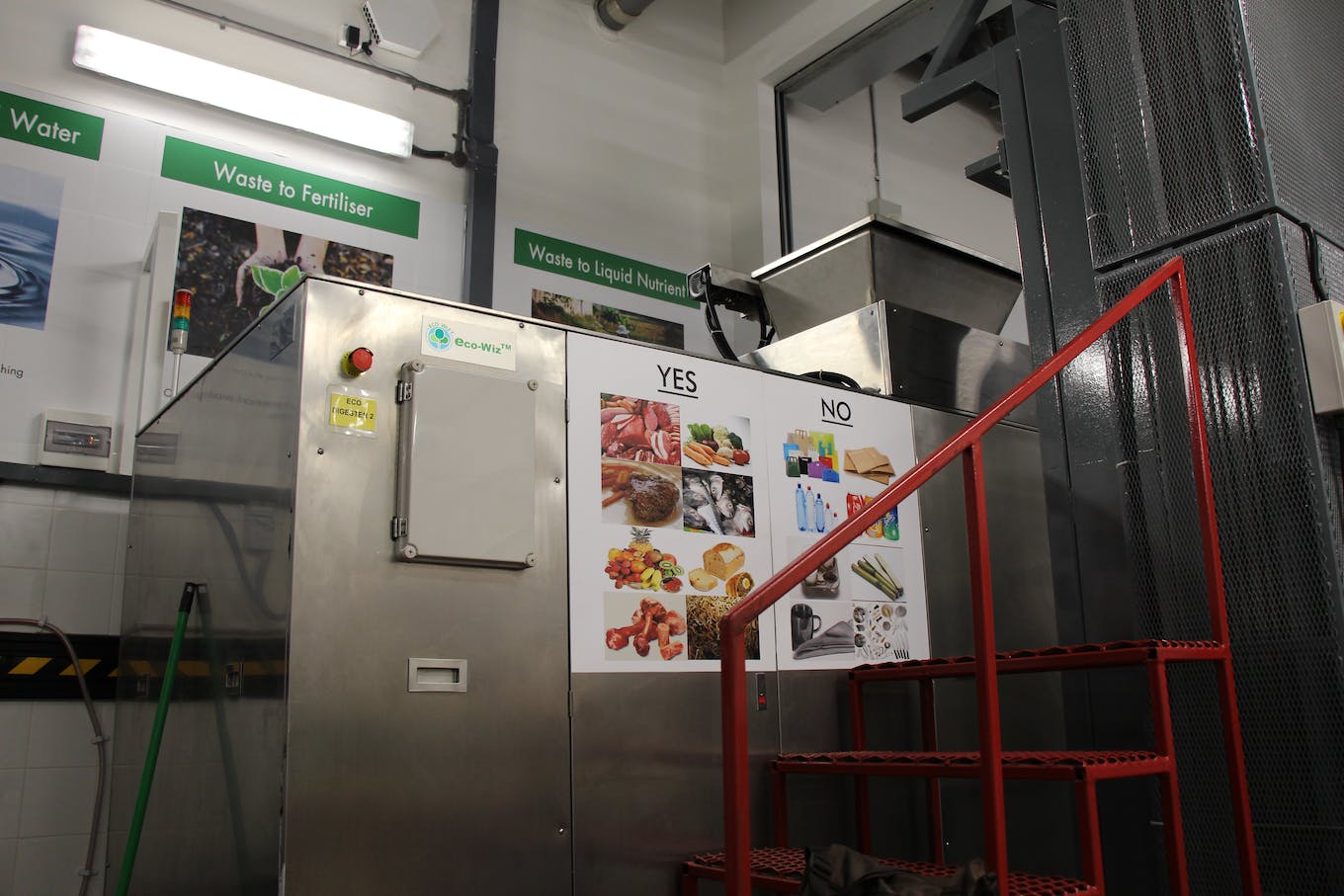 Developed nations are ageing and Singapore is no different, with a shortage in manpower becoming more of an issue. With that in mind, OTH is trialling a number of intelligent Internet-of-Things solutions to reduce the reliance on labour.

Dotted around the community centre are waste bins called Clean Cubes that can compact trash and therefore contain up to eight times the normal volume. The solar-powered bins alert cleaners only when they are full and need to be emptied.

The same applies with the community centre’s smart toilet system that is able to detect which toilets are most frequently used and their odour levels, alerting cleaners via SMS or email when the toilets require freshening up. Manpower is therefore directed to where it is needed the most. The smart toilet system has also been adopted by other buildings including The Fullerton Hotel, Singapore Zoo and Pathlight School.

Autonomous, intelligent robot cleaners may be a common sight at OTH in the near future. The community centre is running a trial in collaboration with a local cleaning company Clean Solutions for a robot cleaner to sweep and mop the floors.

Suhaimi said the robot is a S$100,000 investment on the part of the cleaning company. A pilot test was successfully run at Changi Airport where the floors are carpeted, but results have been less promising at OTH. The robot cleaner at OTH has to sweep and mop the hard floors, instead of just vacuuming as with carpeted floors, and it is being fine tuned.

OTH aims to put the robot cleaner to work by March and has the option to order more after the successful completion of its trial period.

Sustainability was built into OTH from the ground up. The visitor immediately notices that despite the lack of air-conditioning the building remains cool in the mid-day heat, thanks to the combination of the gigantic fans whirring over head and natural ventilation as a result of its design.

Drawn up by local architecture firm DP Architects, OTH was awarded the Building and Construction Authority’s Green Mark Award (Platinum) label last year, indicating that the building has demonstrated that it is energy efficient.

Construction involved the reuse of concrete waste from the demolished stadium building, while a new energy-efficient chiller plant was installed. LED lights are used extensively throughout the community centre and, when completed, the building will feature a green facade of plants.

Taken all together it is estimated that the finished OTH building will make annual savings of 8,715,330 kWh of energy, enough to power 1,701 four-room HDB flats for a year, and 357,193cu m of water, enough to fill 142 Olympic-size swimming pools.

In line with Singapore’s push to become a Smart Nation, where technology is used to empower and enrich the lives of its citizens, OTH has also introduced a host of ICT systems to improve the visitor experience and increase footfall.

Security cameras are currently being used to track the number of visitors to OTH each day. Once the community centre is fully open, a video analytics function will be switched on to recognise visitors’ by age band, sex and race and track where in the community centre they are visiting. The information is attached and stored with anonymous serial numbers so visitors are not personally identifiable.

The information will be used to monitor traffic, review events and event programming, and maximise the use of manpower in addition to keeping track of visitorship.

Another example is how the OTH app, set to be launched later this year, will be able to remember where in the 1,400-lot carpark visitors have parked and show users the quickest route to their ride.

OTH also plans to launch an integrated ticketing system which visitors can use during events to access all of the community centre’s existing facilities with the use of a single ticket. To be launched when the whole development is ready, the system will let operators know where in OTH people are visiting, which activities are popular and therefore make smarter decisions in resource deployment.