Buildings account for a whopping 39 per cent of the world’s energy-related carbon emissions. The best way for the built environment to shrink its carbon footprint is for the industry to work together to find sustainable solutions.

The World Green Building Council (WorldGBC) has just over a decade to realise its vision for all new buildings to be net zero carbon by 2030.

By 2050, the industry body working towards a more sustainable future for the built environment wants to achieve the same for all buildings, old or new.

The biggest barrier to net-zero buildings is still cost, said WorldGBC’s former chairman Tai Lee Siang, who is now executive director of the Singapore Building and Construction Authority’s (BCA) BuildSG, which focuses on the industry transformation map of the built environment sector.

The sums work out. But the problem lies with fragmentation in the sector, said Tai at International Built Environment Week, which took place from 3 to 6 September in Singapore.

A fragmented industry means that building firms that do not reap the benefits of energy efficiency drive their expenditure down and avoid investing in better equipment with higher upfront costs.

“If you have a handle on the lifecycle costing from design all the way to operations and end-of-life, it’s a no brainer to choose all the right technologies and the most sustainable practices,” said Tai on a panel session titled Making Net Zero Energy Buildings Work.

“The problem is, there’s no custodian of the entire process for the lifecycle of buildings, so no one can give you the full picture,” he said.

Buildings account for 39 per cent of the world’s energy-related carbon emissions, and the built environment sector needs to cut emissions in order to limit global warming to 2°C or below by 2100. Of the 39 per cent, 28 per cent comes from operational emissions while 11 per cent is from embodied emissions, which refers to the carbon-dioxide emitted from the manufacture, transportation and construction of building materials.

Net-zero buildings are highly energy-efficient buildings that are powered by onsite or offsite renewable sources and offsets.

Although the figure is a fraction of the total stock, Burrows said the council has made good progress in the two years since embarking on this mission. It has raised awareness of the fact that buildings certified “green” may not be performing to declared standards, and the need to close this “performance gap”, she said.

Asked if WorldGBC is on track to meet its 2030 and 2050 targets, Burrows said it is encouraging larger scale implementation of net-zero buildings.

In Costa Rica and some Scandinavian countries that derive most of their power from renewable sources such as wind and biomass, buildings would be zero-carbon by virtue of the energy grid, said Burrows. “So, the important thing is reducing consumption and upscaling infrastructure and renewable energy to help decarbonise the grid,” she said. 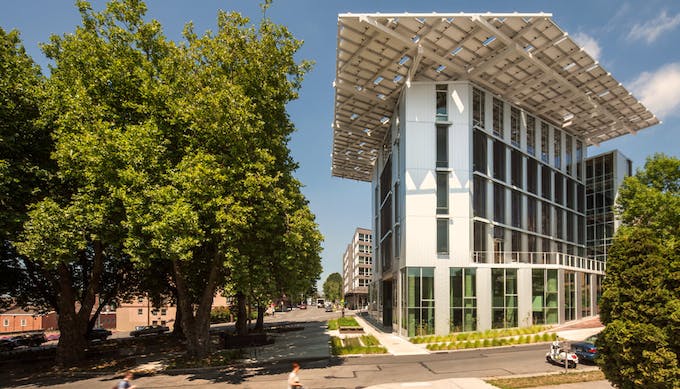 Policymakers can set building-performance metrics that spur innovation and lead design teams to work in a more integrated manner, said Burrows, who counts Seattle’s Bullitt Center as one of her favourite net-zero buildings.

The Bullitt Center team screened all building materials that went into the development of the six-storey office building and ensured that none contained any toxic chemicals. All of the building’s energy is generated on site and tenants get an energy budget. If they use less than what they are allocated each month, they do not have to pay their utility bills.

The carbon cost of tearing down old buildings

With buildings’ embodied carbon making up 11 per cent of global energy-related emissions, a balance needs to be struck between tearing down and redeveloping old buildings into modern high-performing structures, and retrofitting them to become more energy efficient.

For example, the United Nations began a multi-year effort to renovate its New York headquarters in 2007, after calculating that it would take 35 to 70 years for the improved operating efficiencies of a new complex to offset emissions from the demolition and redevelopment process.

The WorldGBC’s Net Zero Carbon Buildings Commitment for companies and cities does not cover embodied carbon, although it aims to do so in future.

There must be incentives for existing buildings to continue to function sustainably and for older buildings to be retrofitted, said Tai. The BCA introduced a Building Retrofit Energy Efficiency Financing Scheme in 2011 to help finance upfront costs for energy efficiency retrofits, for instance.

There are far more technical barriers to navigate when dealing with existing buildings than new projects, but they can be overcome.

One approach to transforming old homes originated in the Netherlands and has spread to other places such as Nottingham in the United Kingdom. Under the Energiesprong (or “energy leap”) initiative, clusters of social housing are refurbished into net zero homes, with money normally spent on energy bills and maintenance paying for the upgrade over a period of time.

Will this eco-friendly, self-sustaining floating island envisaged by a Japanese engineering firm provide more land for Singapore’s people, or remain mere fantasy?
Future or fantasy: Are floating cities the next stage of Singapore's urban development?

Singapore’s response to climate change is more adaptation than prevention. So how will the vulnerable city-state protect its most valuable assets—its buildings—from rising sea levels?
How will low-lying Singapore’s built environment survive rising seas?