The recent UN climate talks in Warsaw failed to give carbon markets the certainty it needed, but there are some signs of revival, say experts, and an international carbon reserve could be the answer

On the surface, the recently-concluded United Nations climate talks in Warsaw have failed to revive the global carbon market with observers saying it could remain “in the coma” for years. But experts point to certain signs of life in the market, which could see a price recovery in the next two years.

Investment under the UN’s US$315 billion Clean Development Mechanism (CDM) - where carbon credits generated can be used by businesses and governments to meet carbon emission targets - has all but dried up in recent years as the value of credits have plunged 95 per cent to around 30 Euro cents.

The talks in Poland were meant to make progress on a global agreement on climate by 2015 but major nations made no commitments on emission targets and the text agreed on by the 194 nations did not spell out how the CDM would be revived.

It did, however, recommend that countries make their pledges for contributions by the first quarter in 2015 “for those in a position to do so” on post-2020 emission targets.

While the Warsaw text is unlikely to trigger significant demand for CDM credits, several European nations made pledges to buy up credits for a few CDM projects in developing countries.

Assaad Razzouk, group chief executive of Sindicatum Sustainable Resources, a clean energy project developer headquartered in Singapore, told Eco-Business in a recent interview that “there’s a lot of activity in the background supporting the CDM”.

The Swedish, British and Norwegian governments and the World Bank, for example, are seeking to buy carbon credits from CDM projects such as in methane abatement and in poor countries in need of the investment, he noted.

“There are various efforts being executed with the aim of reinvigorating investments in clean energy in developing countries via the CDM and other mechanisms,” he said.

The region’s assembly voted in favour of a measure to curb an unprecedented glut of pollution rights in the bloc’s $72 billion ETS, a fix Societe Generale SA said may prompt prices to rise about 11 per cent next year.

Razzouk, who was a delegate at the recent UN climate talks, said the decision in Warsaw inviting countries to promote the voluntary cancellation of CERs (carbon emssion reductions) as a way of reducing the current excessive supply in the market could also boost the flagging sector.

“This could help to promote demand for CERs and it puts another plank on the bridge between the pre-2020 Kyoto Protocol and the post-2020 Durban Platform,” he said.

He noted that developing countries are also likely to push for the revival of the CDM as they have been the principal beneficiaries of the US$356 billion mobilized by the CDM according to a recent report by the Center for American Progress and Climate Advisers.

“What this means is that contrary to conventional wisdom, realistic expectations now exist for a recovery in CER prices over the next 2 years,” he said.

Sounding a cautious note, however, Martijn Wilder, head of Baker & McKenzie’s global environmental markets practice, noted that while European countries are unilaterally buying up CERs, the amounts they are purchasing are small and will not add significant demand.

While he is positive that the CDM will continue into a second commitment period after 2020, the future of the carbon market hinges on how demand for CERs will be created.

He noted that in the absence of a concrete post-2020 global agreement, domestic and regional carbon markets are separately being developed from the bottom up with individual countries developing their own trading schemes.

Some of these schemes, for example New Zealand’s, place restrictions on CERs. The country recently announced that New Zealand firms will not be able to trade certain international Kyoto units after 2015, due to the government’s decision restricting access to those markets after the stalled climate change negotiations.

“People hope for the market to recover… but much also depends on whether these domestic and regional markets accept CERs into their trading schemes,” he said.

In a report released earlier this month, the Brookings Institution, a US think tank, recommended the setting up of a new international carbon market reserve with the authority to adjust the supply of global carbon market securities to stabilize the market.

The most logical candidates for housing such a reserve are the International Monetary Fund (IMF), the World Bank and United Nations, it said.

In its paper, Trading Up, it noted that based on existing policies, carbon markets will cover roughly three billion people and a major share of the world’s economy by 2015, despite some high-profile setbacks for carbon schemes such as in Australia.

One of the paper’s authors, Nigel Purvis, non-resident senior fellow at Brookings and president of consulting firm Climate Advisers, noted that the oversupply of low-cost but valuable carbon credits is an “anomaly in a world of rising energy prices”. 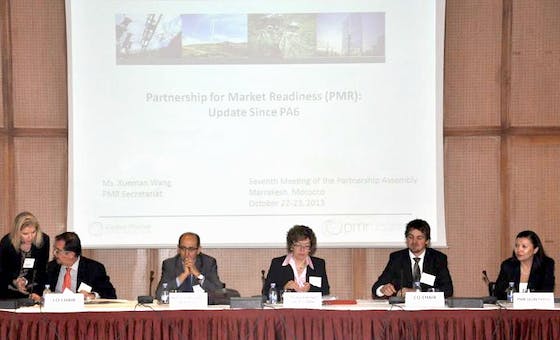 There a number of developments supporting CDM in the background, including the World Bank’s grant-based Partnership for Market Readiness programme. Image: PMR

Countries should buy up these inexpensive credits and establish an international carbon market reserve with the mandate to manage the supply of carbon credits the way central banks control the supply of currencies, he said.

Reduced volatility would provide more stable financial flows to developing countries for investments in renewable energy and efficiency. The Institute noted that an international carbon market reserve of 600 million tonnes of carbon securities could eliminate global carbon price spikes in the early years of the emerging post-2020 climate policy period by as much as 40 per cent.

Countries can act on this at little cost - stockpiling 600 million tonnes of CERs would cost the international community at most US$600 million and would  be worth about $14 billion in today’s dollars by 2030 if managed correctly.

Baker & McKenzie’s Wilder said the concept definitely “has its merits”. It is not unlike what the US government did in the aftermath of the 2008 global financial crisis, when they bought up distressed assets. But the question, he asked, is who exactly will fund the carbon bank, and how do you retain the value of these CERs?

The effectiveness of an emissions trading scheme really comes down to the extent of which it changes behaviour. If you give companies free permits then there’s no need to change behaviour and they keep polluting. What is critical is designing the ETS such that it is not compromised

“Already, an international carbon market reserve is part of the mix in these discussions (to enhance and coordinate future carbon markets),” she said.

Sindicatum’s Razzouk noted that Asia is set to play a key role in the future carbon landscape, with the most ambitious plans being implemented by China.

Of the Asian nations, China, India, Indonesia, Thailand and Vietnam are participants in the World Bank’s grant-based Partnership for Market Readiness programme, which helps countries explore innovative and cost-effective ways to scale up emissions reductions and foster carbon market instruments.

It means these countries, which account for the bulk of Asia’s economy and population, will eventually launch a carbon market or carbon price. “Asia is going to be a very prominent adopter of carbon pricing,” he added.

Jones noted that while the number of national and regional carbon markets is growing, what’s missing is a system for stabilizing carbon assets.

“Some countries are starting to buy up carbon assets from these developing nations in an effort to restore market confidence and lock-in sustainable development benefits.  While that’s a step in the right direction, a global carbon market reserve would be far more effective and should be created,” she added.

Beyond creating a carbon bank, some ways to ensure effective carbon markets is to put a strict cap on pollutors to restrict emissions, said Wilder.

“The effectiveness of an emissions trading scheme really comes down to the extent of which it changes behaviour. If you give companies free permits then there’s no need to change behaviour and they keep polluting. What is critical is designing the ETS such that it is not compromised,” he said.

“The CDM, to be fair, is the only effective market-based mechanism driving investment into the carbon market. It has been highly successful and an effective legal mechanism. The problem lies with the demand (for CERs), that’s the real challenge.”

Even as a global deal to curb carbon emissions eludes the world’s governments, different carbon-pricing systems are being set up by regional blocs, signalling that the carbon-credit system is not dead, but flourishing.
Valuing carbon: One size doesn't fit all

Glimmer of hope for carbon markets