Innovations to cool off a high energy bill

Feeling the heat from your air conditioning bill? Eco-Business checks out three innovations at BEX Asia 2014 which boost air conditioning effectiveness, reducing the amount of energy needed to keep a building cool.

At this year’s Singapore Green Building Week, delegates attending the International Green Building Conference or the Build Eco Expo (BEX) Asia might have noticed that jackets and ties were in short supply.

To set an example for the industry, the Building and Construction Authority (BCA), the event’s organizer, had requested the venue operator to set thermostats to no more than 25 degrees Celsius, and informed speakers and exhibitors not to over-dress.

In hot and humid Singapore, air conditioning accounts for at least half of a building’s energy use, if not more. To keep energy demand within reasonable limits, the BCA has for years been encouraging building owners and operators to refurbish interiors and exteriors for more effective temperature control, including upgrading chillers to more energy efficient models wherever possible.

Among the products and services displayed at BEX Asia 2014, a green building and construction industry exhibition held at the Sands Expo and Convention Centre from Sep 1 to 3, several were notable for their potential to significantly increase the efficiency of air conditioning. Eco-Business takes a look at them:

Putting a ceiling on air conditioner use

Radiant ceilings, which heat or cool a room through chiller or heater pipes incorporated into their structure, have been in use for some time now. SGL Lindner, a joint venture between Germany-based carbon products company SGL Group and construction specialist Lindner Group, has developed an improvement on the typical radiant ceiling: panels made from carbon, with chiller pipes embedded inside the panels rather than mounted on them. 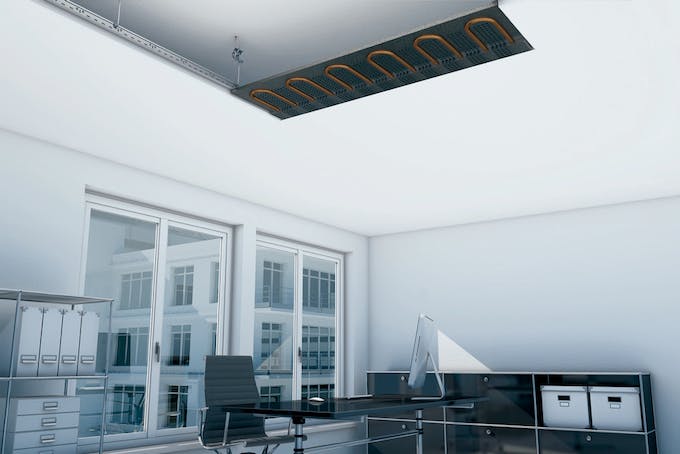 The Ecophit technology can remove heat from a room much faster and more evenly than conventional radiant ceiling panels. Image: Ecophit

The ceiling panels, marketed under the Ecophit brand, have the advantage of high thermal conductivity, meaning that they can remove heat from a room much faster and more evenly than conventional radiant ceiling panels.

A feasibility study by the Nanyang Technological University’s Energy Research Institute found that when installed in an office space, the Ecophit chilled ceiling system consumes about 26 per cent less energy than conventional air conditioning, without sacrificing the comfort of people working in the space.

When installed as part of a refurbishment project, building owners can expect a payback of around three years, said Mohamed Alami, the managing director of SGL Carbon’s marketing and sales division. He added that Ecophit can also lead to savings on construction costs in a new project because it removes the need for air conditioning ducts, therefore allowing developers to fit in as much as ten percent more floor area through lower ceiling heights. It is also considerably lighter than conventional ceiling panels.

More importantly, said Alami, Ecophit tackles the biggest energy consumption issue in tropical climates. “As a responsible man, the first thing I would ask is: how can I reduce that air conditioning?” he said. “Now, with technology [like Ecophit], energy efficiency doesn’t mean not feeling comfortable. You can be energy efficient and also comfortable at the same time.”

Keeping the heat out of the house 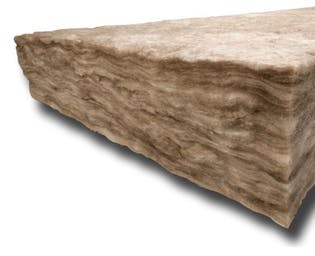 Cooling a building with air conditioning is one thing; keeping it from heating up again, in a hot climate, is another. Knauf Insulation, an international manufacturer of insulation products in Europe and the US, showcased Earthwool at its BEX Asia booth: a cottony-soft, marbled brown insulation fibre created from recycled glass bottles.

Earthwool, which first hit the market in 2009, costs considerably less than the mineral wools typically used for building insulation and is more lightweight. But its real benefit, in this part of the world, lies in its ability to keep the cool in and the heat out.

In 2013, Knauf ran a test of Earthwool in Australia’s hottest town, Birdsville, which suffers record-breakingly hot summers. That year, summer temperatures reached as high as 49.5 degrees Celsius. The company insulated every ceiling in the town with Earthwool, producing dramatic results: within days, homeowners and business owners saw their electricity consumption drop by 20 per cent.

“People think that insulation is about keeping buildings heated, but it can also be used to keep them cool,” said Claire Cunliffe, Knauf’s marketing manager for Australia and New Zealand.

Getting the most out of that cool draft 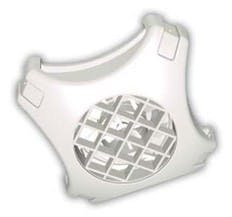 This small plastic fan attachment, only slightly larger than an iPad, fits into the opening of air conditioning ducts and redistributes the air stream evenly across the room. Image: Air Conditioning Enterprise

For some building users, extensive refurbishment or even basic refitting may not be an option. The WindWill air current mixer developed by Japan-based Air Conditioning Enterprise may provide a solution: this small plastic fan attachment, only slightly larger than an iPad, fits into the opening of air conditioning ducts and redistributes the air stream evenly across the room. It does not require a power supply, being driven solely by the air stream already flowing through the duct.

The concept behind WindWill may appear simple, and its range of cutesy colours - which include powder blue and glittery pink - give it an almost toy-like appearance. But when installed, it is highly effective. A simulation test by the Tohoku University’s Graduate School of Engineering found that the air current mixer greatly increases the consistency of temperature distribution, and a series of trial runs in Tokyo office buildings suggest that WindWill can reduce air conditioning energy consumption by 30 per cent or more.

This year’s BEX Asia, in its seventh edition, is themed “Building Today, Sustaining Tomorrow”. More than 350 companies across the globe showcased their new and innovative products to visitors and delegation from the region, including Taiwan and Indonesia.

Our special event coverage of the International Green Building Conference 2014 is brought to you by City Developments Limited (CDL).