The new United Nations-backed funding mechanism hopes to give smallholder farmers the support they need to boost their income and unlock the country's sustainable farming potential.

Up to 24 million smallholder farmers in Indonesia stand to benefit from a large-scale financing scheme that seeks to boost rural livelihoods by providing more reliable access to water.

Known as the Integrated Participatory Development and Management of Irrigation Project, the initiative will fund the management of a network of irrigation canals across thousands of hectares of Indonesian farmland.

The initiative will also give farmers access to high-yielding rice and vegetable seeds, a link to market for their produce, and training in sustainable farming techniques.

The US$852.9 million project is a collaboration between the Asian Development Bank (ADB) and the United Nations’ rural poverty-fighting agency International Fund for Agricultural Development (IFAD) and the government of Indonesia.

In the first phase of the project, 1,800 irrigation schemes are to be rehabilitated in 16 provinces in Sumatra, Java, Kalimantan, Sulawesi and Nusa Tenggara covering a total area of almost two million hectares. The aim is to develop 10,000 irrigation sources across the archipelago by 2023.

Indonesian agriculture is dominated by palm oil, but the sector is known for employing poorly-paid smallholder farmers and destructive farming practices, which include the burning of carbon-rich peatland to make way for plantations.

By engaging smallholder farmers to better manage irrigation infrastructure and share knowledge about sustainable agriculture, the new project seeks to improve the living standards of farmers while at the same time reducing peatland degradation and forest fires.

Our experience shows that when communities are capacitated and they are given control over natural resources to produce a steady stream of income for themselves and their families, they will adopt sustainable farming practices.

Irrigation canals will not dry peatlands

Palm oil plantations that use unsustainable farming practices build canals to drain peatlands so that they are suitable for growing palm trees. But dried up peatlands become highly flammable and are susceptible to long-burning fires that produce suffocating smoke, as witnessed by the Southeast Asian haze crisis.

IFAD’s programme officer for Asia Pacific Sarah Hessel explained that the irrigation project will not cause peatlands to dry up because the irrigation schemes are not located in peat areas.

“We are bringing in partners, such as the non-profit Center for International Forestry Research (CIFOR) to support the development of peatland-friendly livelihood options in order to reduce pressure on peat resources,” she said. 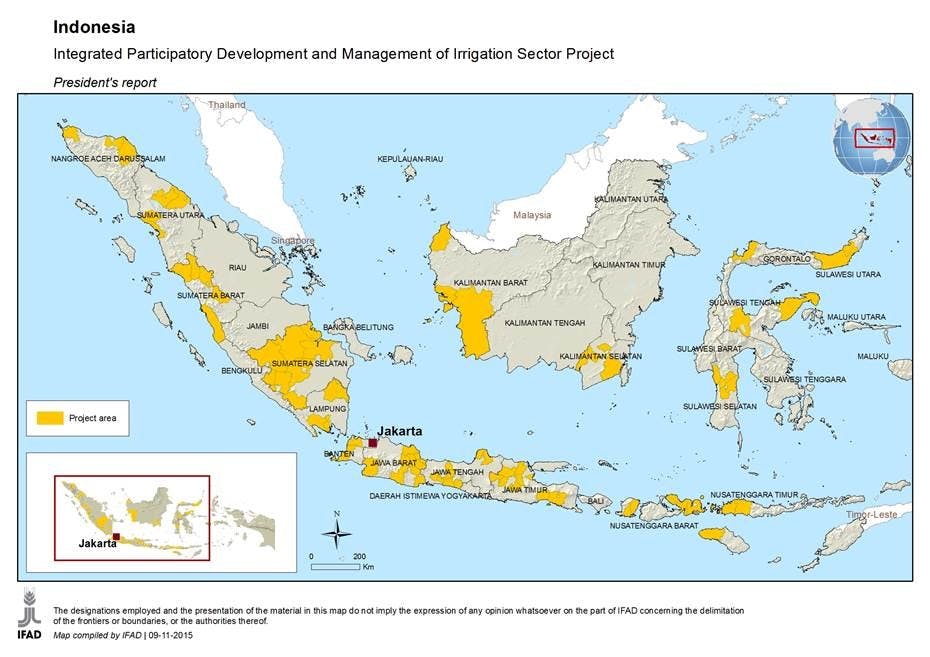 Map of the pilot provinces for the Integrated Participatory Development and Management of Irrigation Project (IPDMIP). Image: IFAD

For IFAD, this is a historical funding project and the largest it has supported in 40 years.

“Our experience shows that when communities are capacitated and they are given control over natural resources to produce a steady stream of income for themselves and their families, they will adopt sustainable farming practices,” he said.