The first shipment of certified legal plywood is a landmark in the fight against illegal logging, one of the biggest threats to forests worldwide.

The first containers of plywood certified as legal under the EU’s anti-illegal-logging action plan were shipped out of the Indonesian capital on Tuesday, a milestone in the fight against blackmarket timber in one of the world’s most heavily forested countries.

Of the 15 nations that have agreed to take part in the scheme, Indonesia is first to succeed in establishing a national system for verifying the legality of its timber — a considerable achievement for a country where unscrupulous loggerspocketed a presumed $60.7-81.4 billion from illicit sales between 2003 and 2014, according to the nation’s antigraft agency. Indonesia lost nearly $9 billion in state revenue from unreported timber sales during the same period.

“This signifies Indonesia’s commitment to combat illegal logging and the illicit timber trade,” said Rufi’ie, a director at the Ministry of Environment and Forestry.

Rufi’ie, who like many Indonesians goes by one name, added that 36 certifications had already been issued under the scheme, known as Forest Law Enforcement, Governance and Trade (FLEGT). He said he hoped Indonesia’s compliance with the program would increase the value of its exports.

With the adoption of the scheme, EU timber importers will not have to perform their own due dilligence on certified shipments from the archipelago country, increasing the competitiveness of Indoensian timber vis-a-vis other producers.

Vietnam appears likely to be the second country receive the EU’s blessing to issue FLEGT licenses.

A board member of the Indoesian Wood Panel Association (Apkindo), Gunawan Lim, said he expected plywood exports to jump 20 percent next year on the strength of the new certification, largely because not just Europe but other developed countries were also concerned with legality.

Aida Greenbury, the head of sustainability at Asia Pulp & Paper, Indonesia’s largest pulp and paper company, agreed: “As nations around the world from Japan to Australia look to tackle illegal logging, Indonesia will benefit from major first-mover advantage for buyers looking for legal products.” 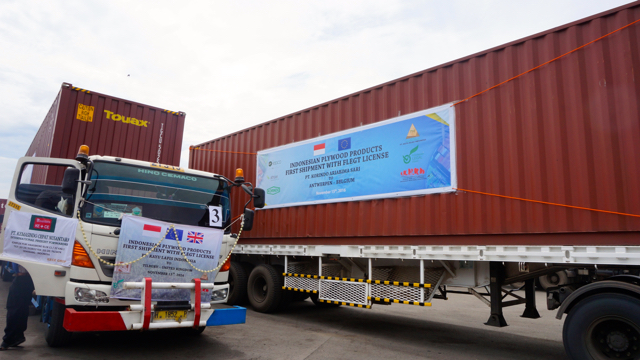 Containers of FLEGT-certified wood are seen on their way to Jakarta’s Tanjung Priok Port on Tuesday. Twenty-three containers were shipped out in all. Photo by Lusia Arumingtyas

The focus now shifts to maintaining the credibility of Indonesia’s Timber Legality Assurance System (SVLK), on which the issuance of FLEGT licenses is based.

Indonesia is home to hundreds of thousands of forestry enterprises, many of which operate informally and on a small scale, and which can be difficult to monitor.

Large companies break the law, too. On Wednesday, the Supreme Court convicted PT Merbau Pelalawan Lestari of logging outside the boundaries of its permit area on Indonesia’s main western island of Sumatra.

NGOs called on the Indonesian government to make sure the scheme was properly enforced and monitored.

The WWF urged greater transparency, calling on the Indonesian government to ensure that civil society groups “will be granted full access to information including relevant data and planning documents,” Aditya Bayunanda said. “Holding up such information would greatly decrease the credibility and transparency of the system.”