Eco-Business recently visited a palm oil plantation belonging to Golden Agri Resources (GAR) to see how the company is tackling a culture of land burning in West Kalimantan, an area of Indonesia that was ravaged by the haze-making fires of 2015. Here are some scenes from the ground.

The peatland forest fires of 2015 in Indonesia choked much of Southeast Asia with a persistent haze from August to October that year.

The fires caused as much damage to GDP as the Indonesia’s largest industry - palm oil - contributes to the economy in a single year.

Kalimantan, the Indonesian part of the island of Borneo, suffered the worst of the fires. The region is particularly fire prone because of a disastrous project to drain its peatlands to convert them into rice fields that was abandoned in the 1990s.

Eco-Business recently visited a palm oil estate in West Kalimantan owned by Singapore-listed Golden Agri Resources (GAR) - Indonesia’s second largest palm oil firm, with a planted area of 482,228 hectares - to find out what the company is doing to tackle the country’s well entrenched culture of seasonal land burning, which has been fingered as the main cause of forest fires. 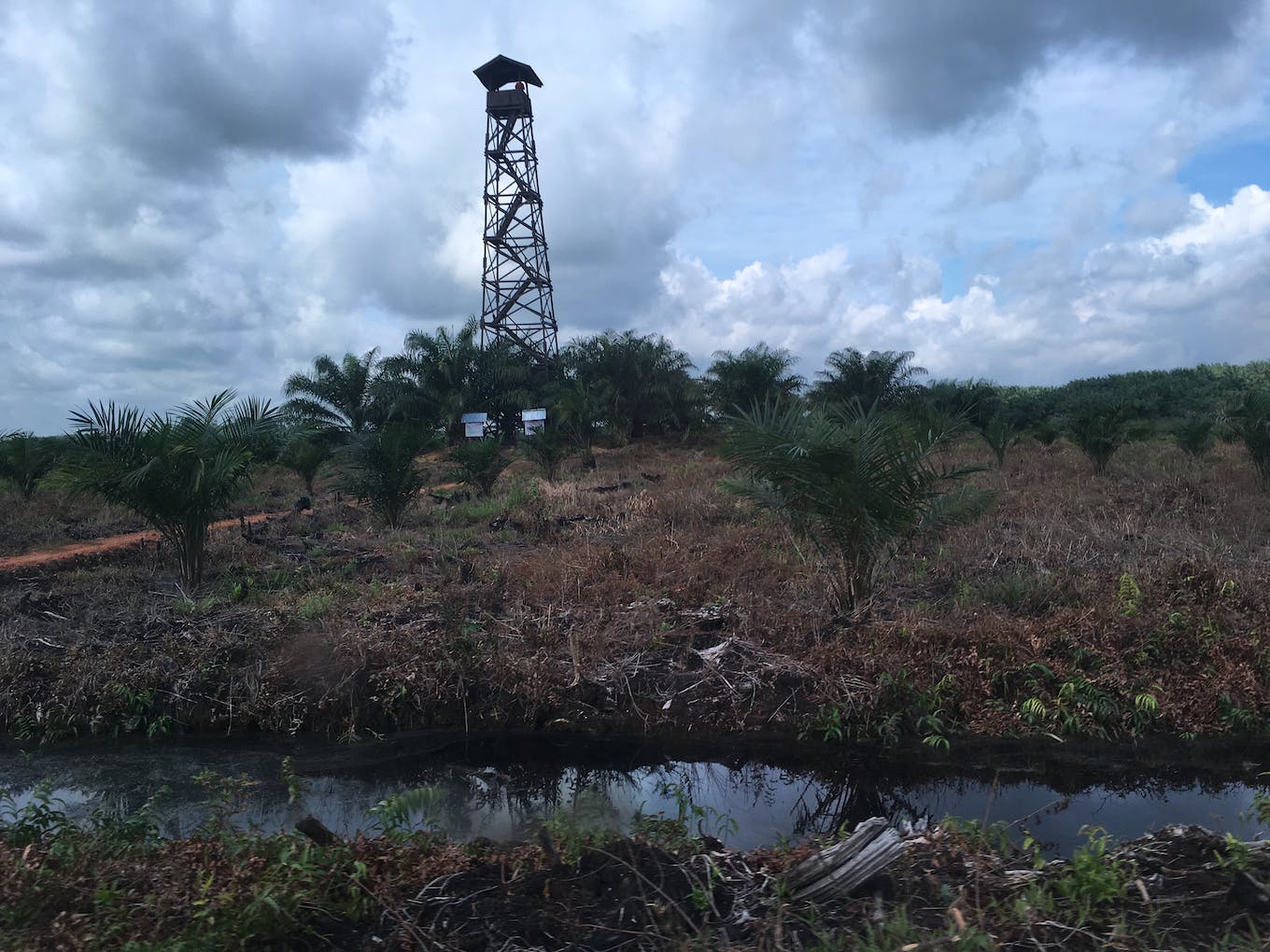 A fire tower stands 20 metres tall, offering a view for many kilometres in any direction over an estate owned by GAR subsidiary PT AMNL in West Kalimantan.

From this fire tower, which was built last year to add to a network of 17 towers serving the area, the devastation to conserved forest land caused by the fires of 2015 can still be seen 18 months on. In West Kalimantan, GAR plans to restore 2,600 hectares of peatland lost to the fires, and preserve 17,000 hectares of land identified as of high conservation value. 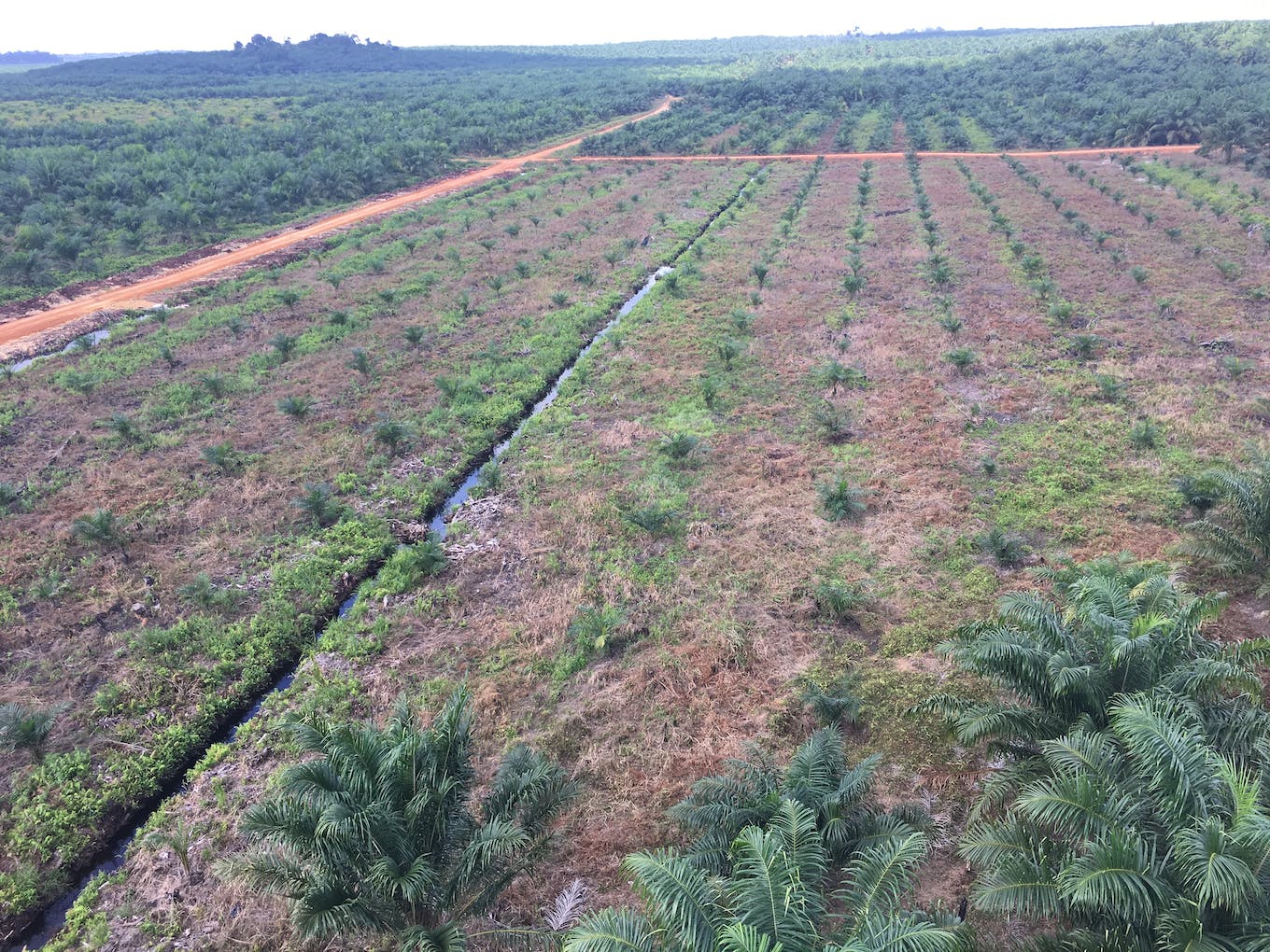 A canal runs through the middle of the plantation to manage the water table. Palm trees cannot grow on soggy peatland, so the land must first be drained. However, draining the carbon-rich peat leaves it extremely vulnerable to fire.

According to GAR, only seven per cent of its 482,228 hectares of planted land is on peat. This leaves the company with a relatively small amount of land that the government has mandated it must restore after the fires of 2015. 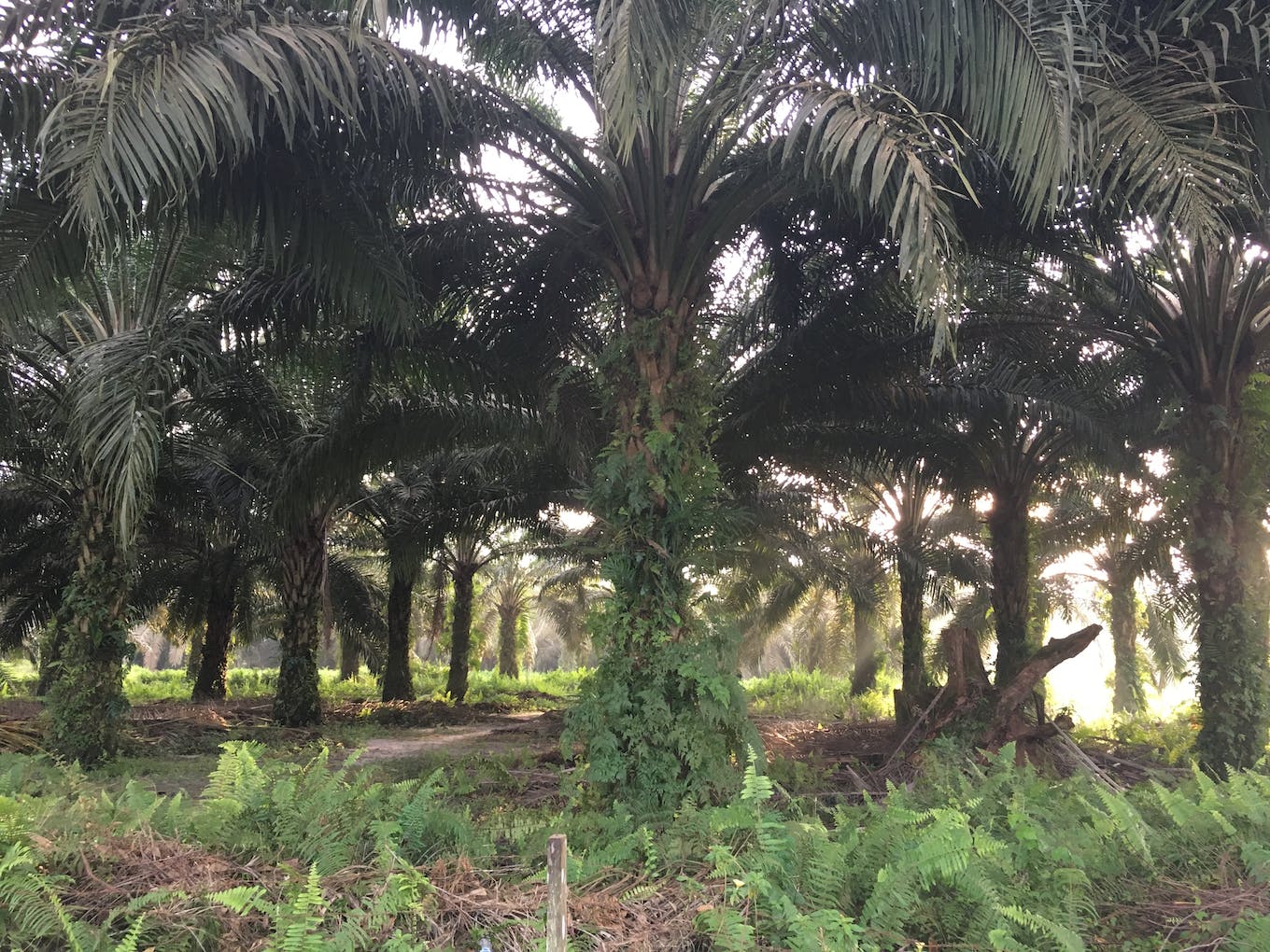 An oil palm tree typically bears fruit three to four years after it has been planted. A tree lasts 28 to 30 years before it is injected with pesticide and removed to make way for new trees.

An old tree is too tall for workers to harvest the fruit bundles. A well-managed palm oil plantation requires less land, water and fertiliser than other tropically grown crops such as soy, and up to five times the yield per hectare. 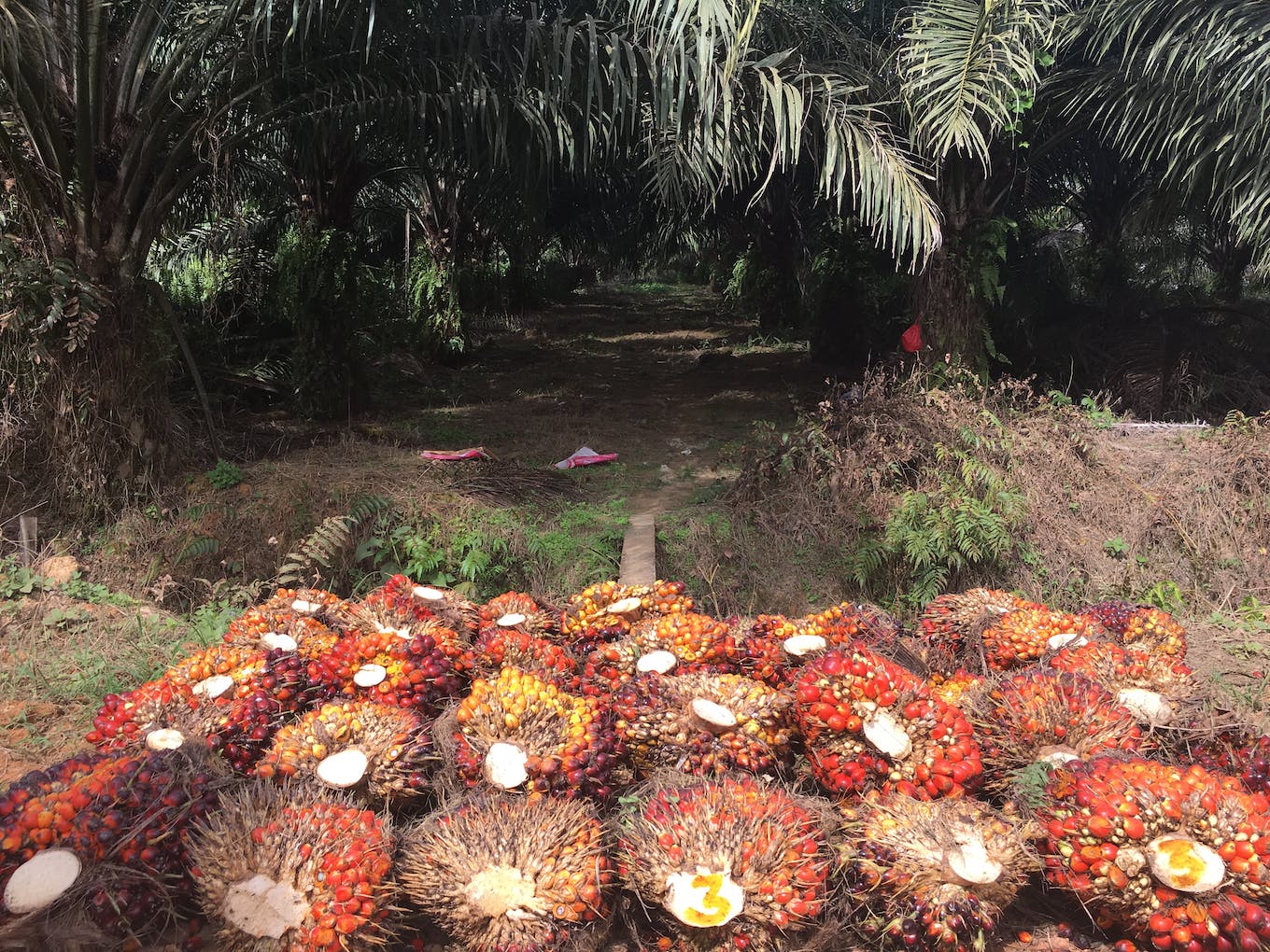 Freshly cut bunches of palm lie on the side of the road waiting to be collected. Palm fruit must be gathered quickly - within 24 hours of cultivation - otherwise it will spoil and will be rejected by the mills.

Fruit bunches are harvested either using a chisel or a sickle attached to a wooden pole to reach fruit high up on the tree. It is a highly-skilled process, and a harvester’s skills are said to grow with the tree. 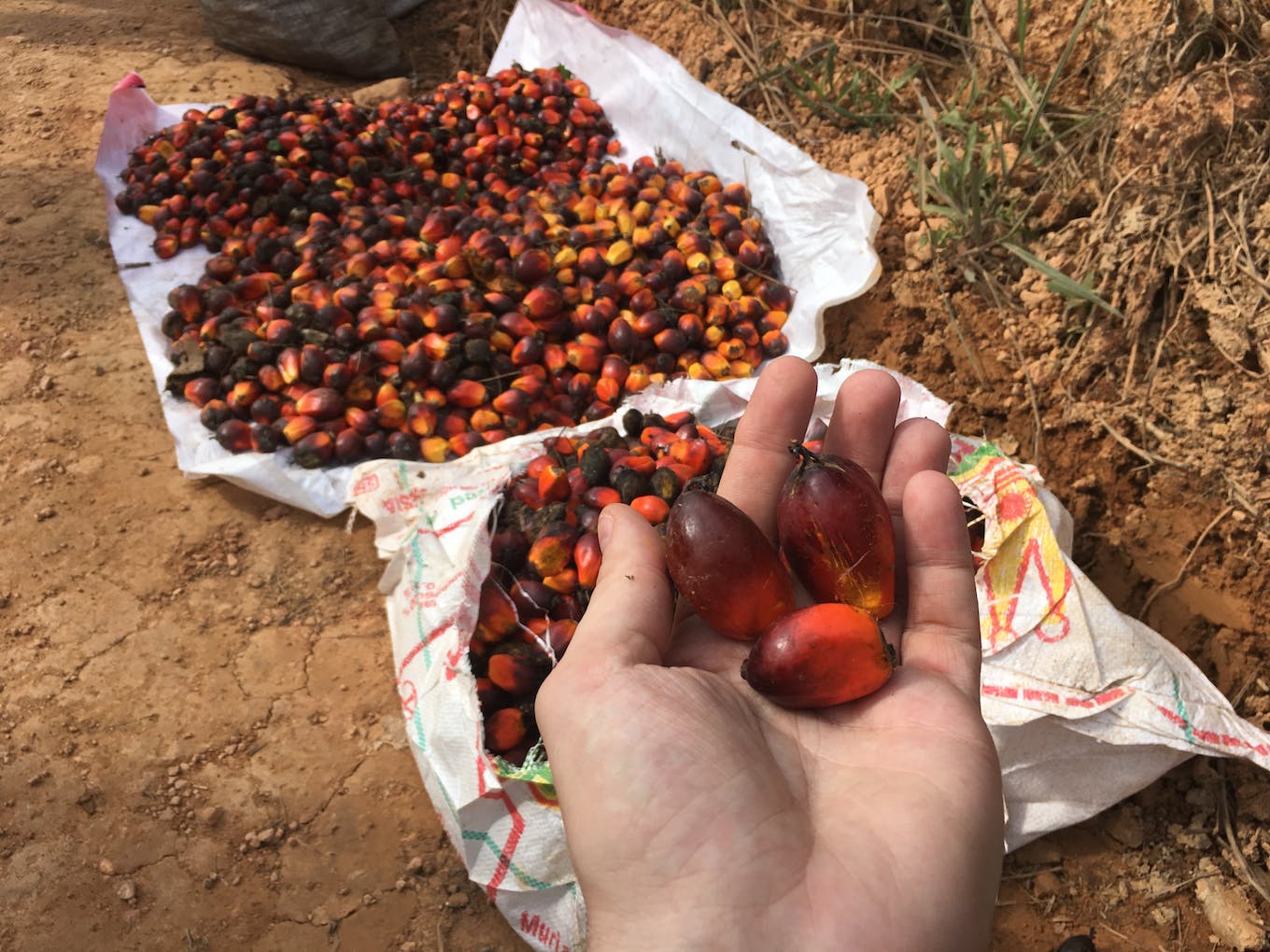 When a palm tree is harvested, individual fruits come loose from the bunches and disperse around the base of the tree. The number of loose fruits that fall from the bunch is generally an indication of how ripe the fruits are. The loose fruit is gathered by harvesters and placed on sheets for collection on the roadside.

Palm oil is an ingredient in roughly half of all products sold at any supermarket, and is the world’s most widely used vegetable oil. 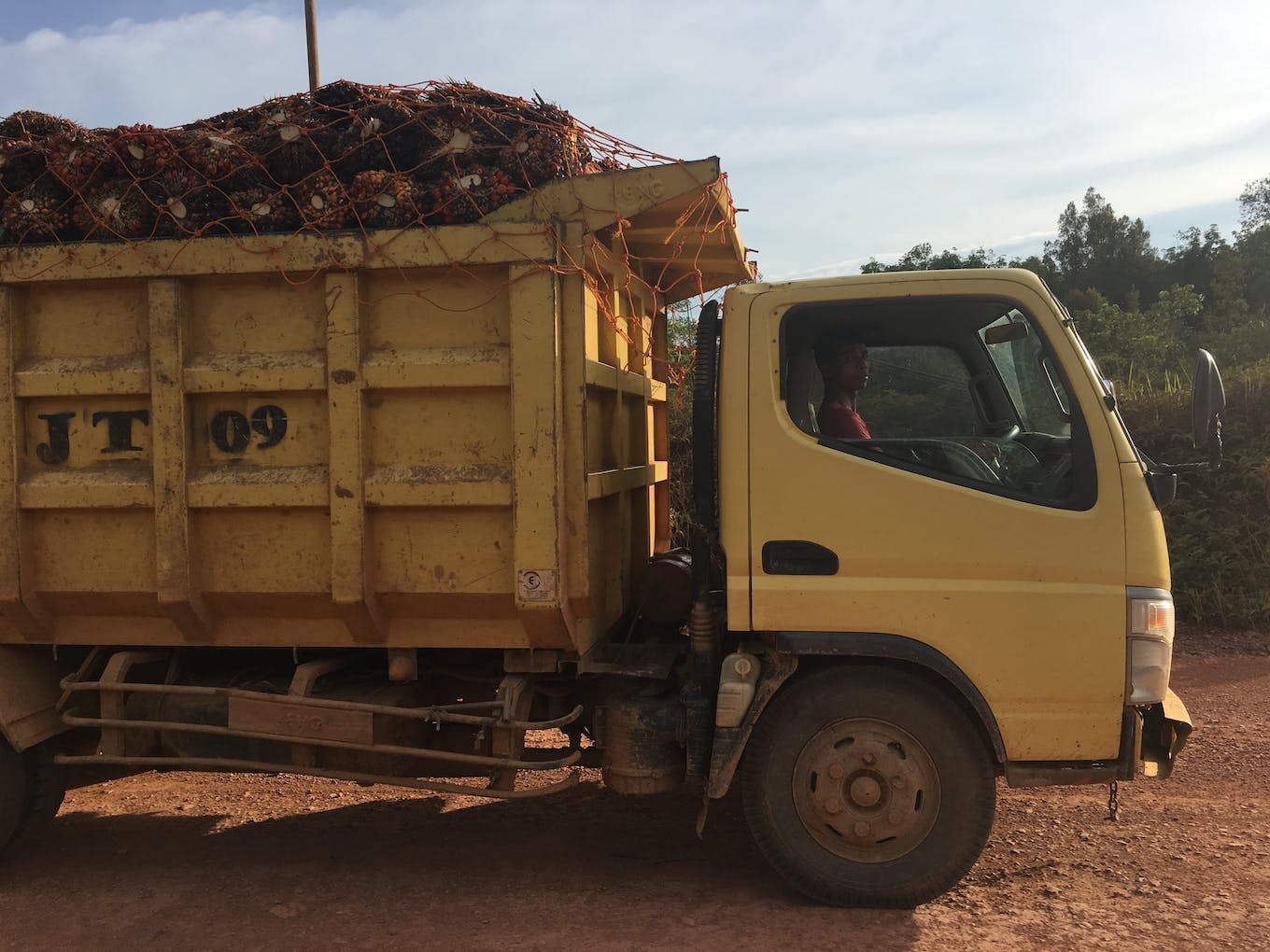 A man looks cautiously out of his truck, filled with fresh oil palm bunches. A single truck full of palm oil can fetch around US$1,800 in Kalimantan. 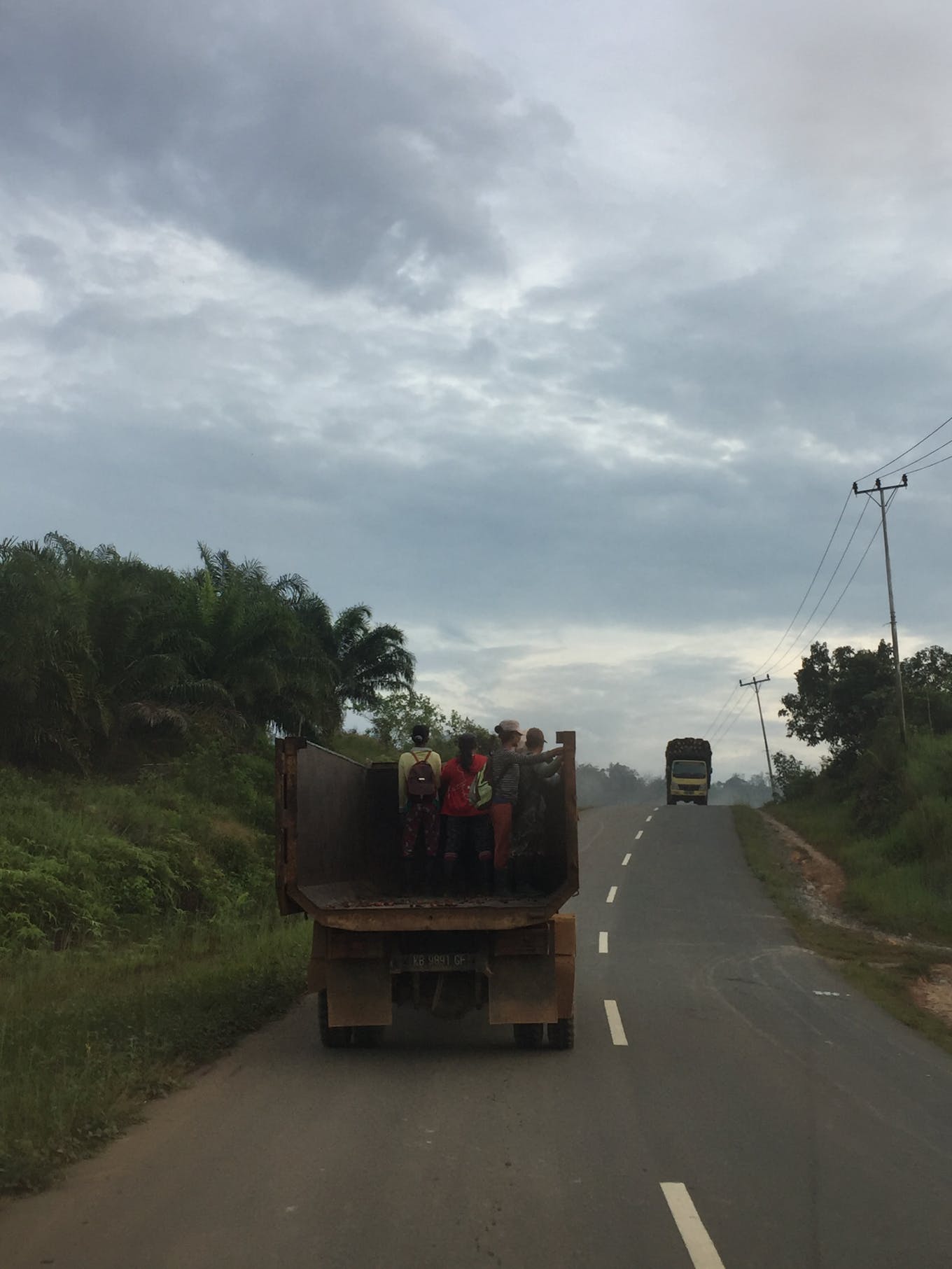 Palm oil workers travelling by truck. Indonesia and Malaysia, which together account for 85 per cent of global palm oil production, employ around 3.5 million workers to maintain and harvest oil palm plantations. The industry has faced criticism for using forced migrant labour and child labour, and for low wages and discrimination. 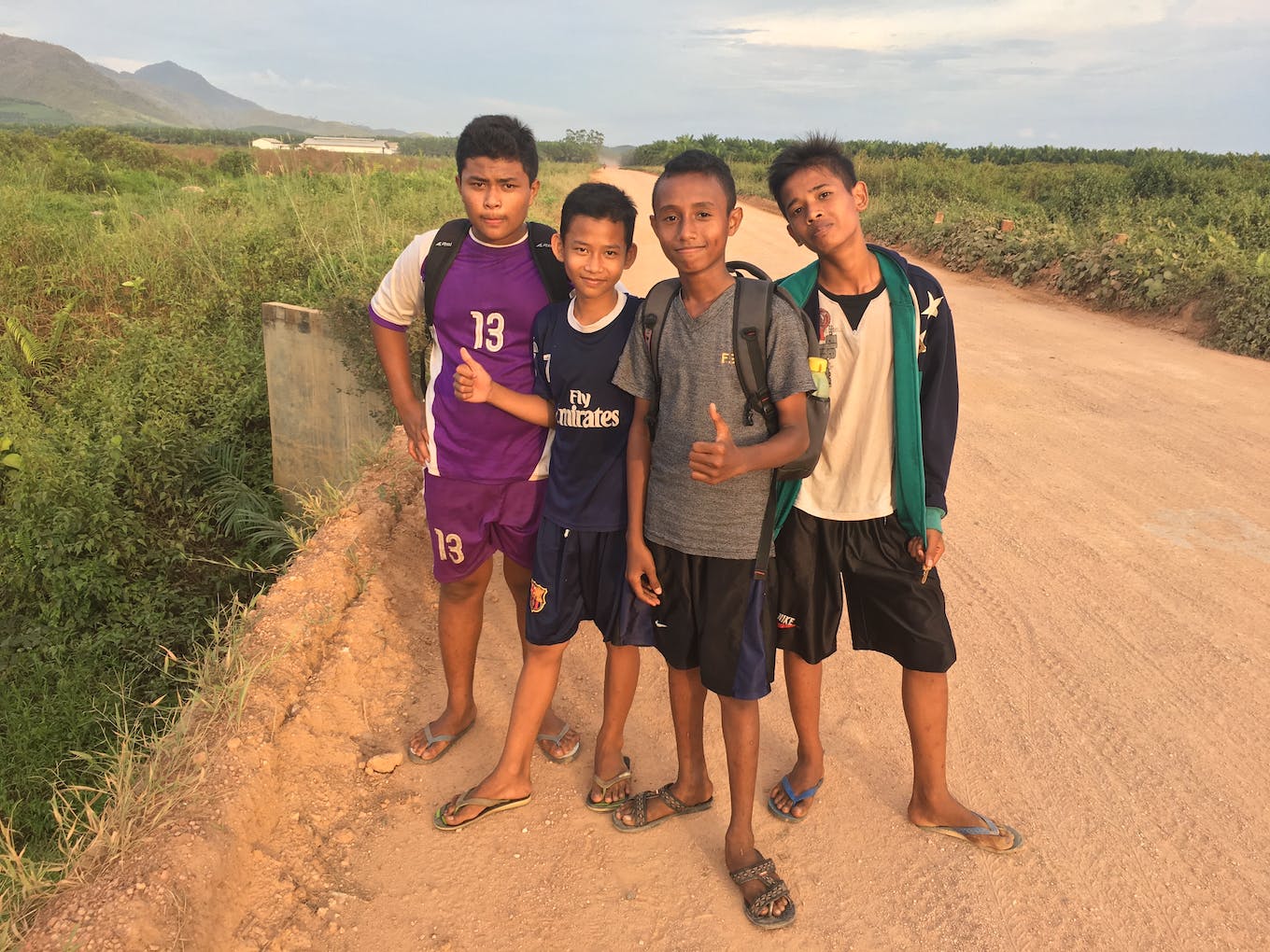 Future farmers? Four boys from a village in a plantation in West Kalimantan stopped their motorbikes to offer Eco-Business a ride. The people who live in and around Indonesia’s palm oil estates are often the forgotten part of the story of the country’s battle with forest fires. 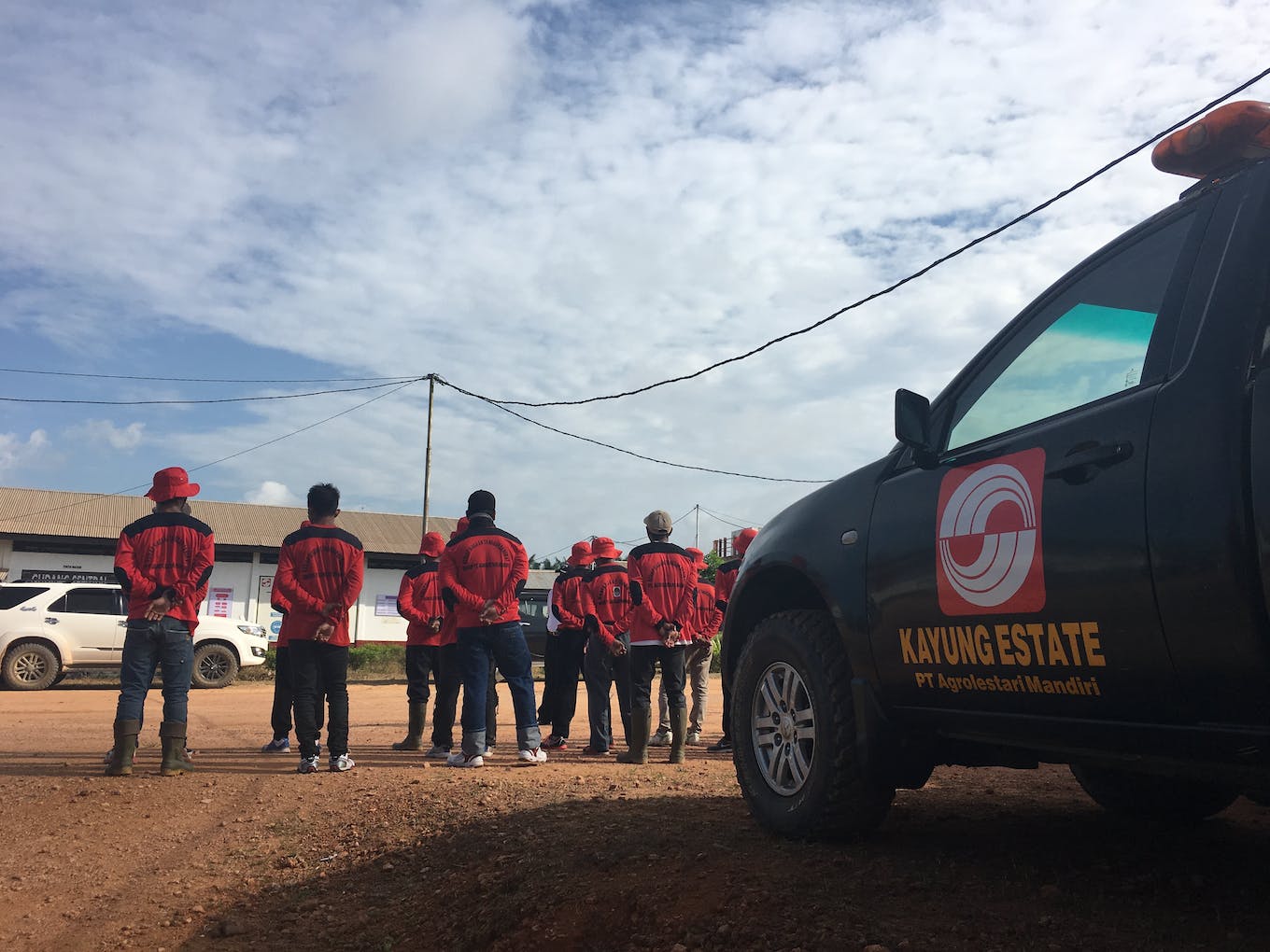 A community firefighting task force on PT AMNL’s Kayung estate in West Kalimantan stands to attention during an inspection in the midday sun.

The firefighters are the first line of defence against illegal land burning. They are led by a Reaksi cepat (fast response) team that involves all management-level staff on the estate.

A task force has 15 core members in each of PT AMNL’s five estates. In GAR’s 153 estates, the company has around 2,295 trained fire fighters. 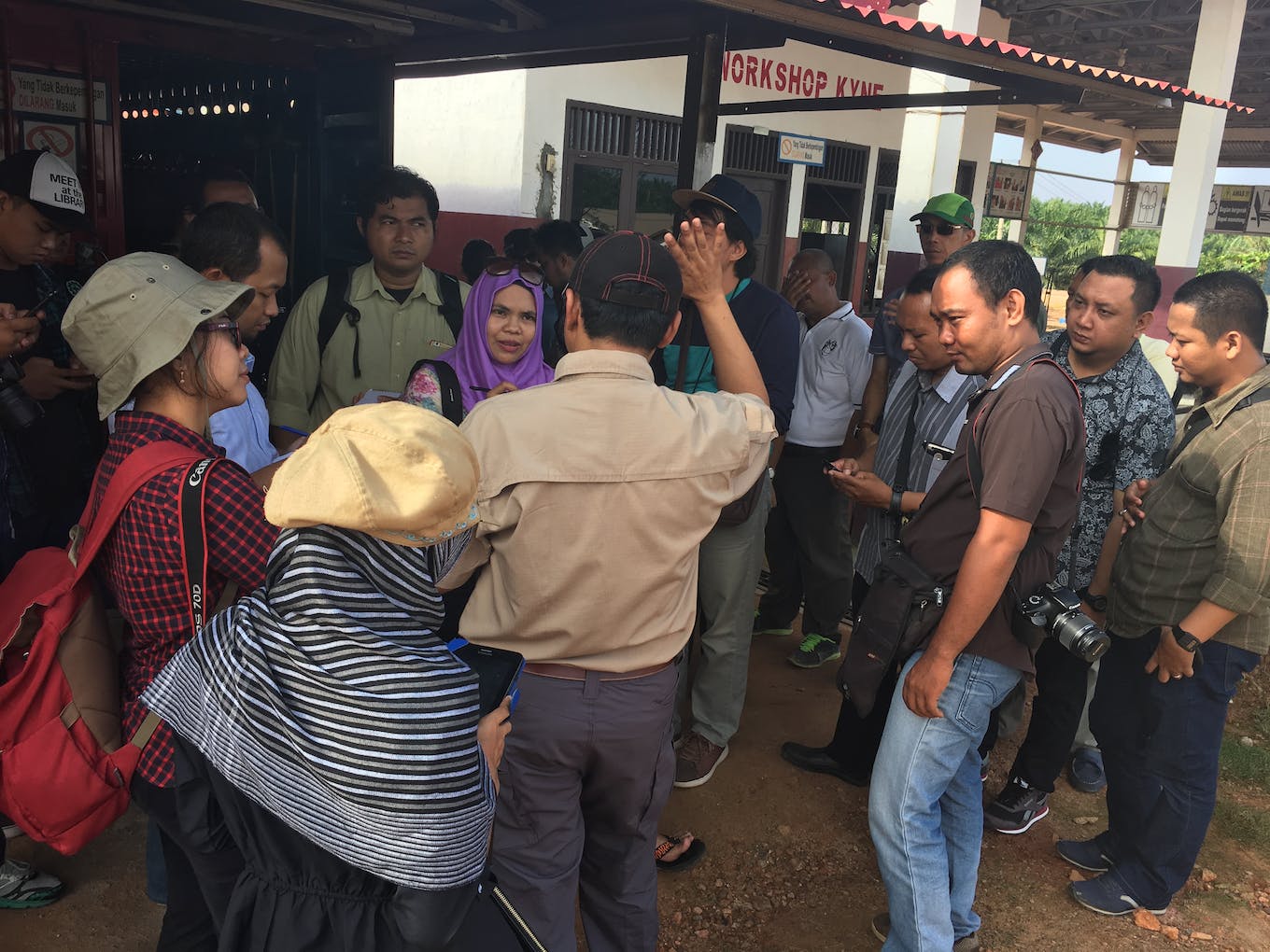 The head of GAR’s fire prevention and response team, Anselmus Achmad Supriyanto, is being asked questions during the media tour of the company’s fire response capabilities. 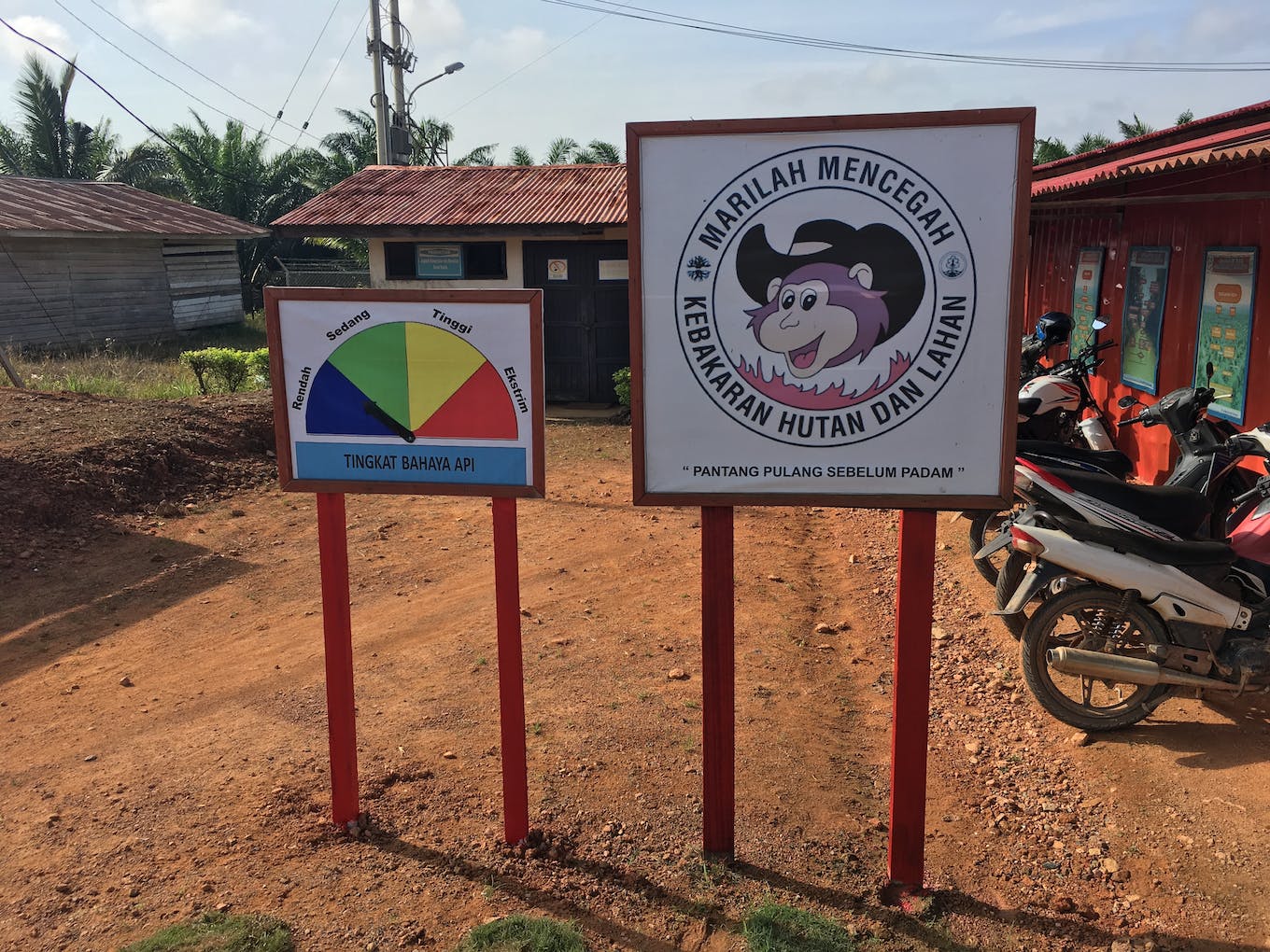 A fire warning risk indicator stands next to a sign to promote fire safety on PT AMNL’s Kayung estate.

“Let’s prevent fires in the plantations and forest,” the sign on the right reads, around a cartoon image of a smiling monkey wearing a cowboy hat.

The fire warning system is graded, with blue indicating the lowest level of risk, and red the highest. The fire season runs from February through to October, when the weather tends to be driest. 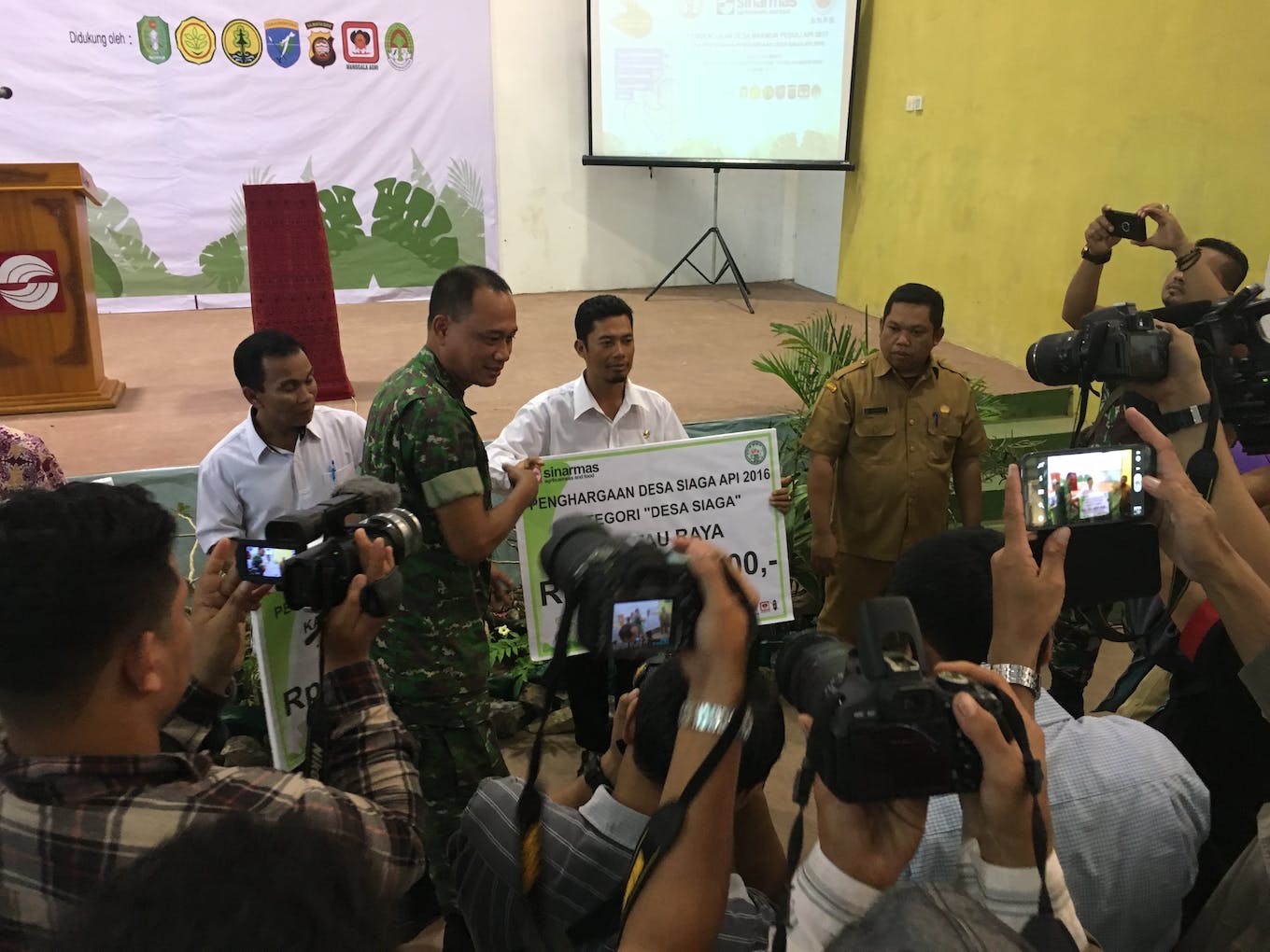 A cheque for IDR 100 million (US$7,500) is awarded to village representatives living in a GAR concession in West Kalimantan. The award is for keeping their village fire free.

Golden Agri’s fire free village programme started as a pilot in eight villages West Kalimantan in 2016. All were successful in staying fire free, as were nine villages in Jambi that were part of the programme. All of the participating villages will receive infrastructure aid throughout this year. 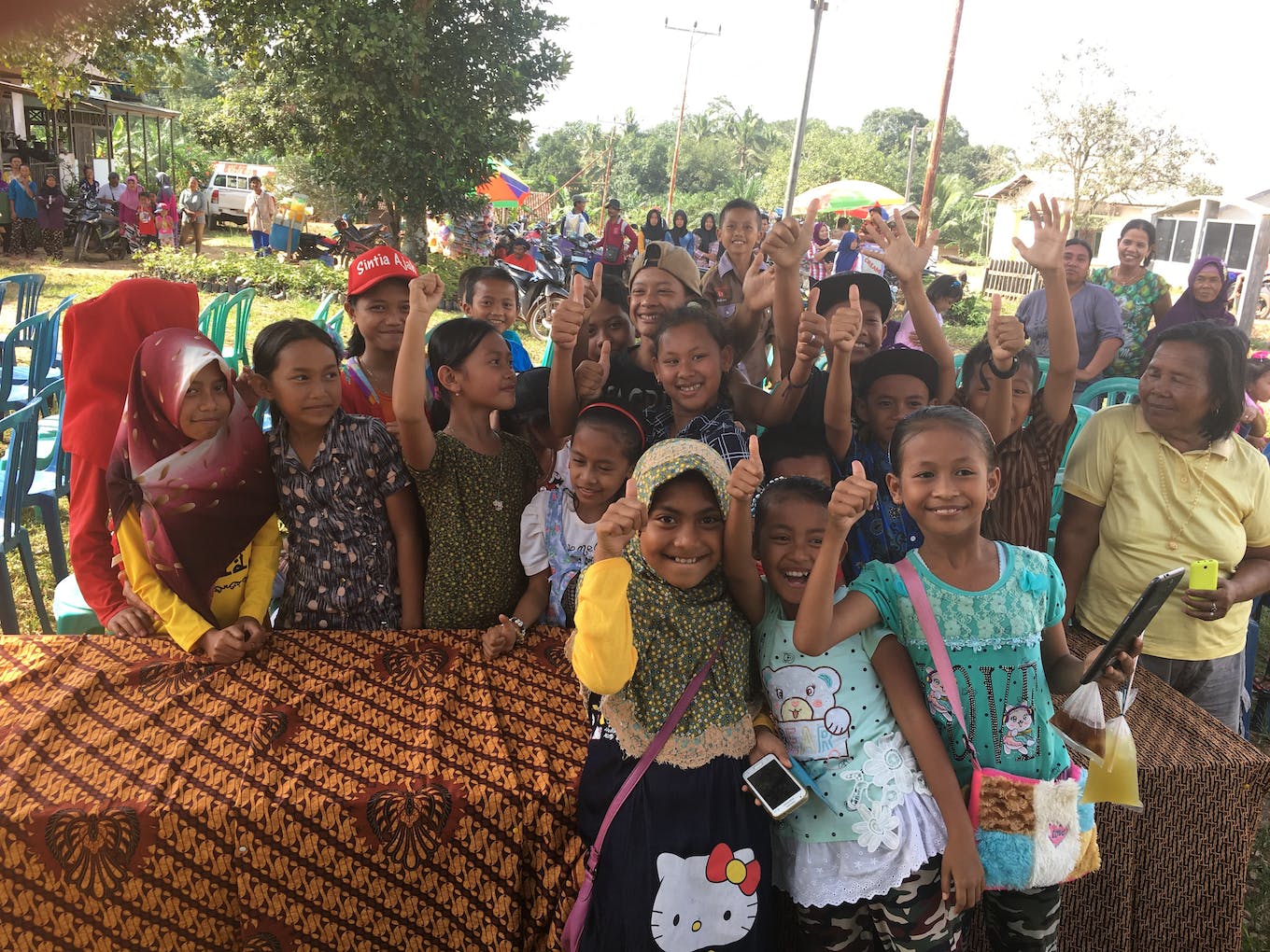 Flicked cigarette butts and untended cooking stoves are also causes of the fires, although most are started deliberately to clear land. Children are far more likely than adults to suffer permanent respiratory damage from inhaling smoke from the fires. GAR has used children in a public service campaign to draw attention to those worst affected by the fires.

The majority of people in this village are from Java, where land burning is a less common approach to clearing land for agriculture, as it is in Kalimantan and Sumatra. 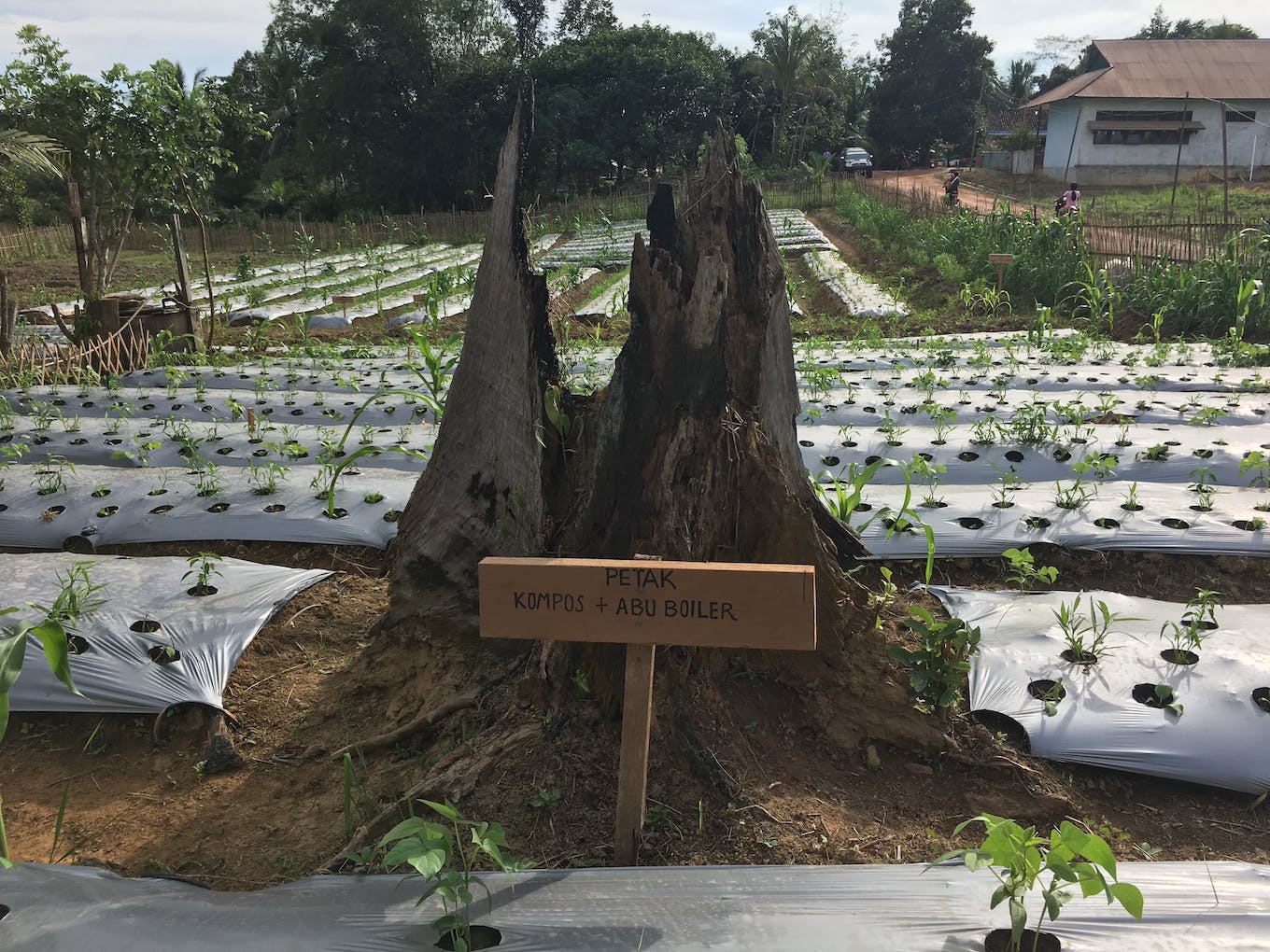 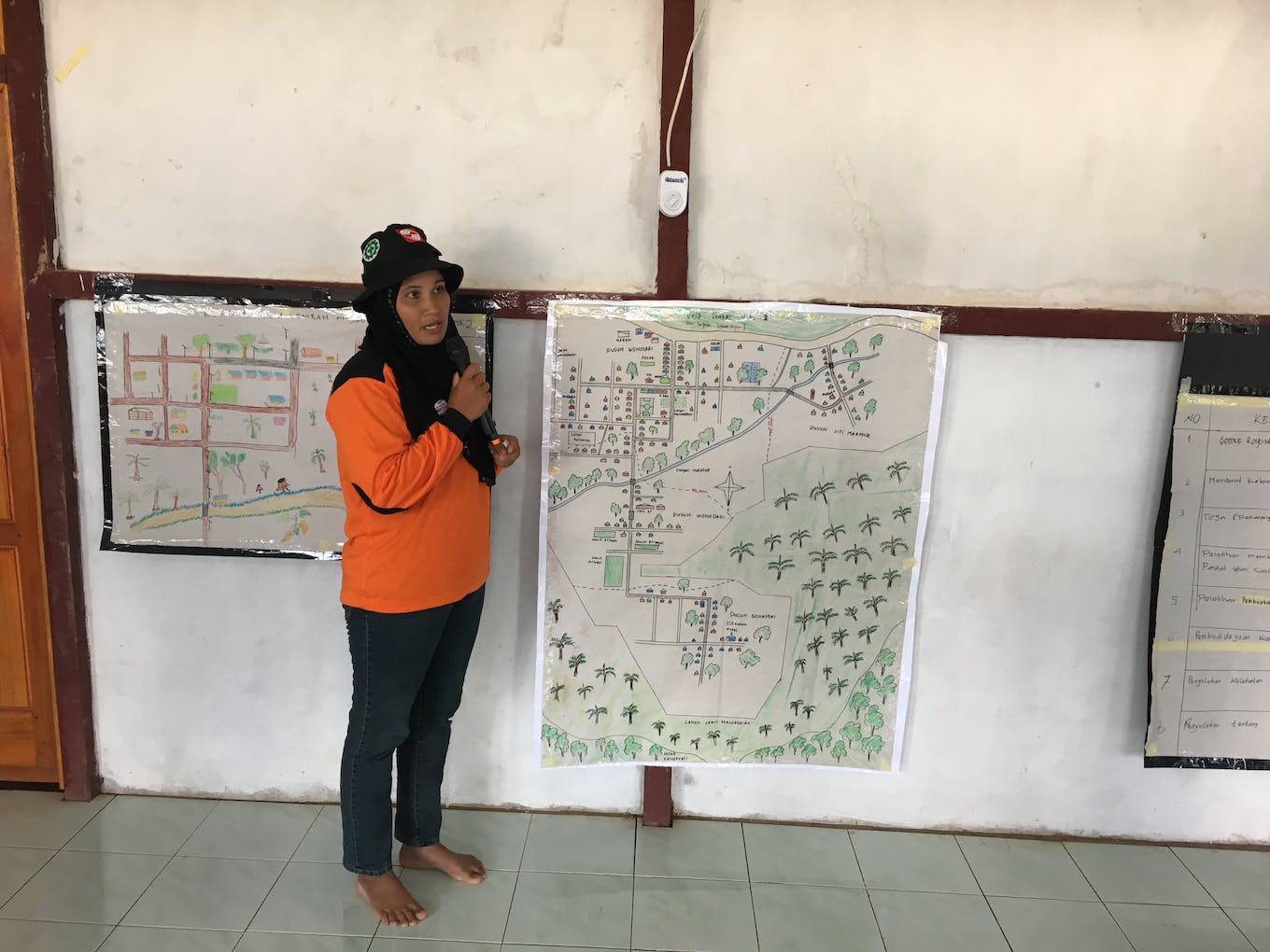 Part of GAR’s field school requires participants to draw their ideal village. The drawings depict the village’s agro-ecosystem before and after fire-free land treatment. 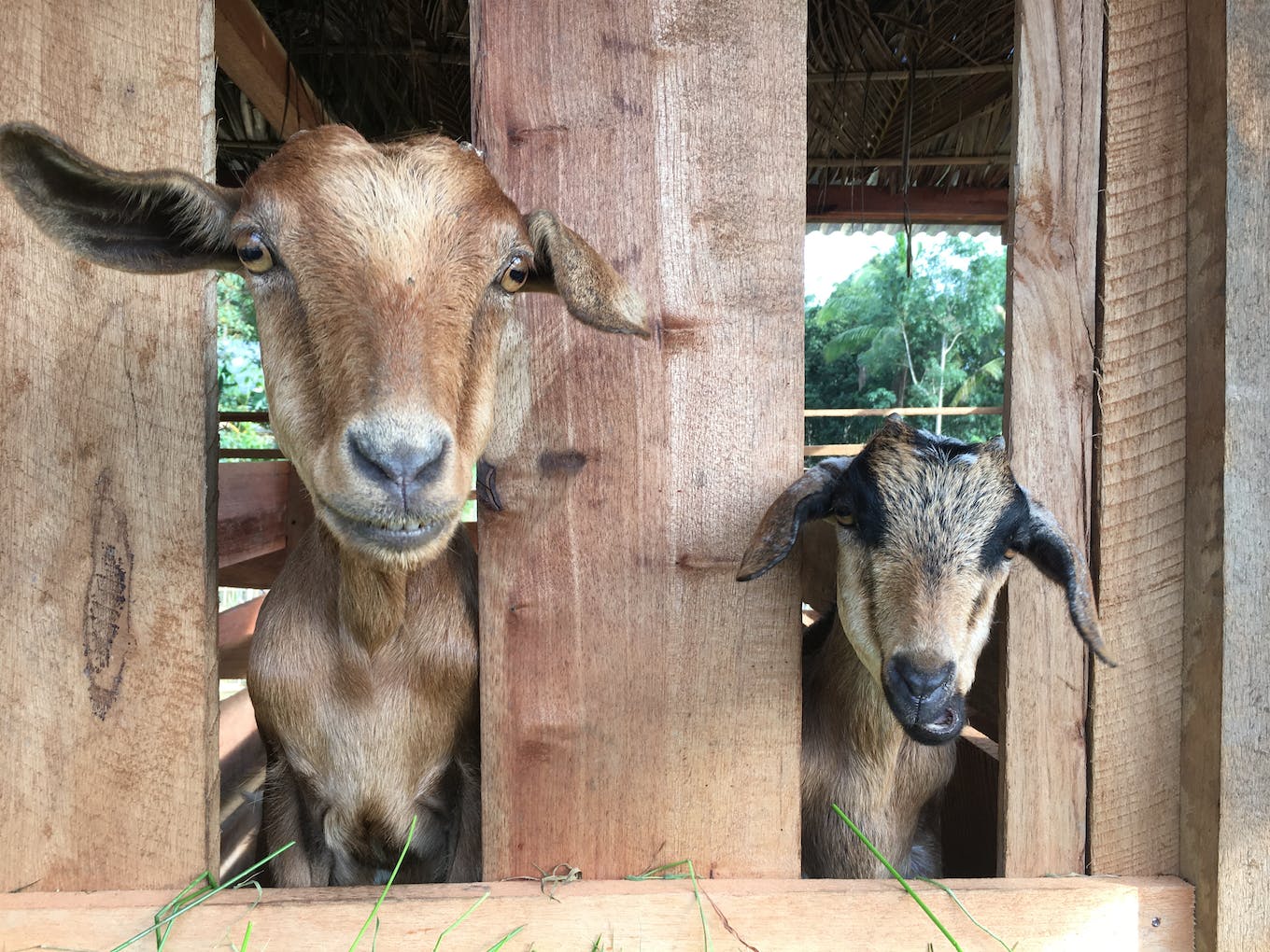 GAR also donates goats as are part of the company’s farmer field school project. The goats will provide manure to use as fertiliser for crops. 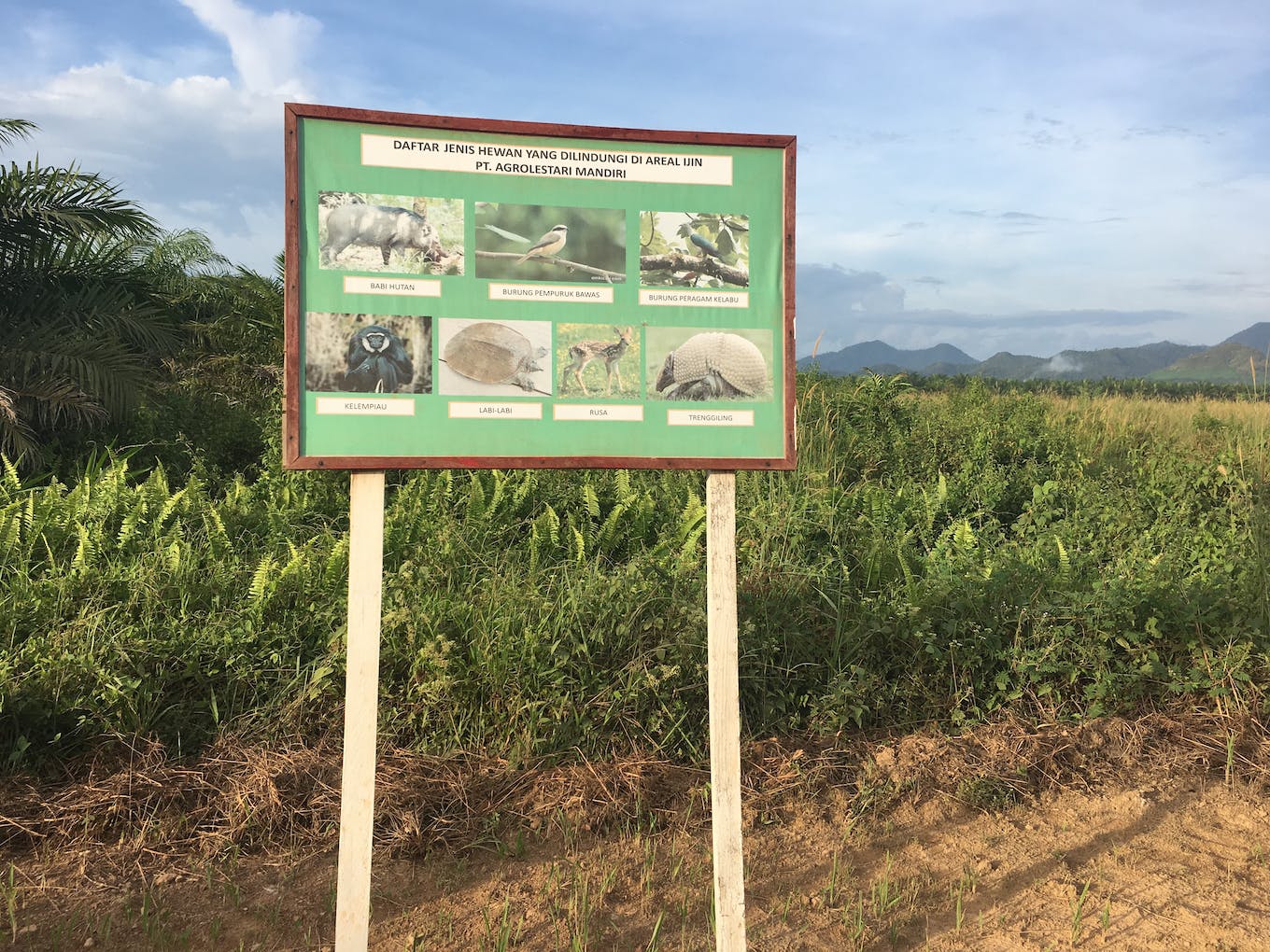 A sign on the side of the road highlights the protected status of wildlife living around the PT AMNL estate, including the critically endangered Sunda Pangolin. The neighbouring peat forests are among Southeast Asia’s richest animal habitats.

West Kalimantan is home to wildlife such as the endemic proboscis monkey, sun bears, clouded leopards and leaf monkeys. The charismatic orangutan is the pin-up species used by NGOs to highlight the threats to Indonesian wildlife posed by the expansion of the oil palm trade.

Villages are being encouraged to conserve wildlife, although for some, the forest animals are a source of food. 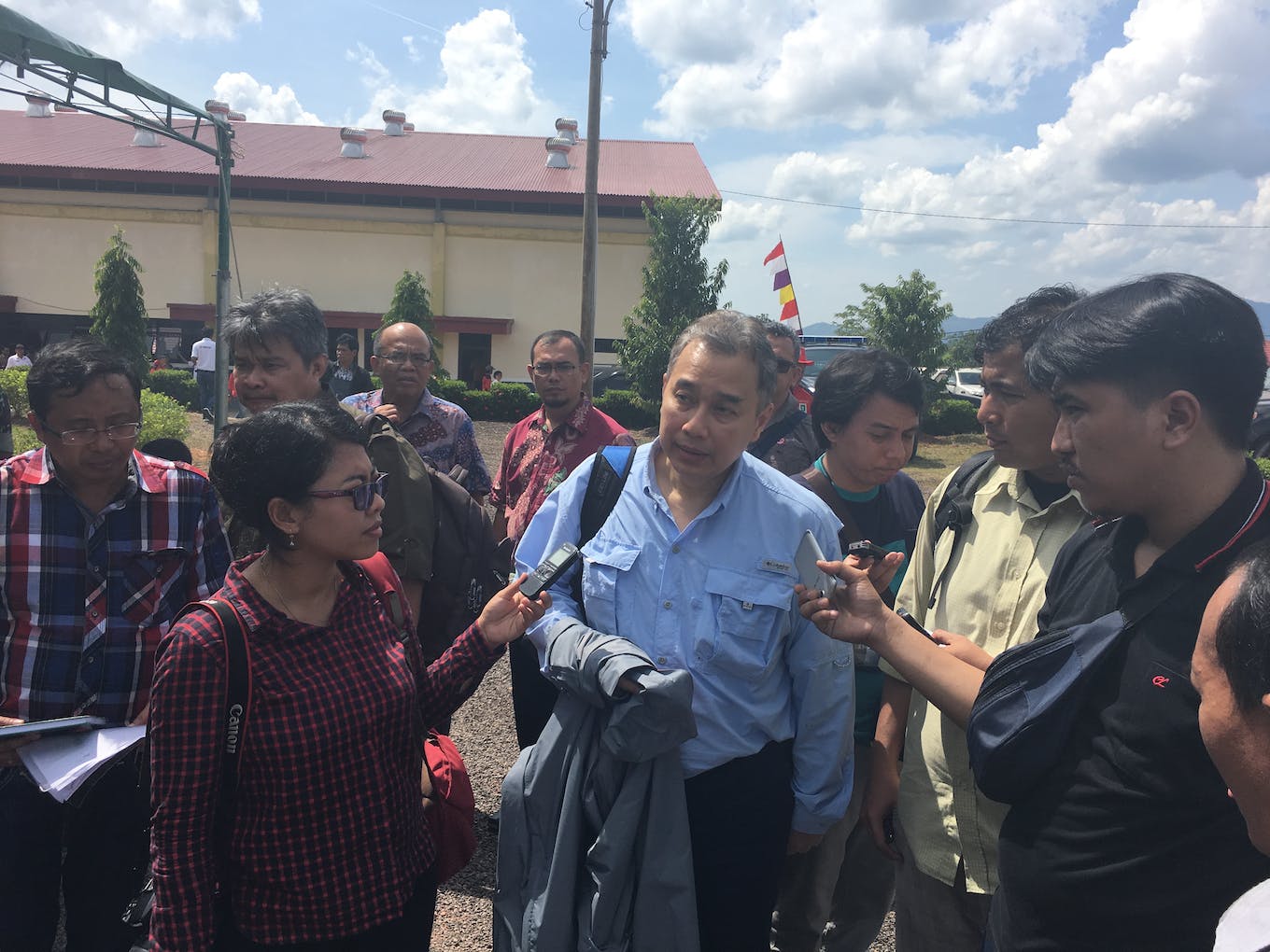 Golden Agri Resources managing director of sustainability Agus Purnomo talks to the press after a ceremony to mark the company’s fire prevention programme at an estate at PT AMNL in West Kalimantan.

Deforestation, forest fires and labour abuses have pushed the palm oil sector - and Indonesia - into the international media spotlight, and much of the criticism has been unfair, Purnomo says.

“The problem is that the news simplifies the reality,” he tells Eco-Business. “For example, the assumption that all palm oil planting causes deforestation - this is just untrue.”

“A lot of the big palm oil companies are not opening up forests at all. But of course there are medium-sized players and smallholders who are, because that is the only available land,” he says.

To condemn the product - oil palm - is not productive and will not address the issues at hand, Purnomo says, adding that the government must rise to by tackling the root cause of the problem - poverty.

Leadership is needed from government to reduce wealth inequality in Indonesia’s more remote rural areas, which in turn will reduce pressure on the forest, Purnomo says.

“All the company can do is limit it [fire] to its own concessions. If we try to do work beyond our concessions, people will ask what’s behind it,” he says, referring to the suspicion that palm oil companies try to push the boundaries of their concessions to open up more land for plantations. 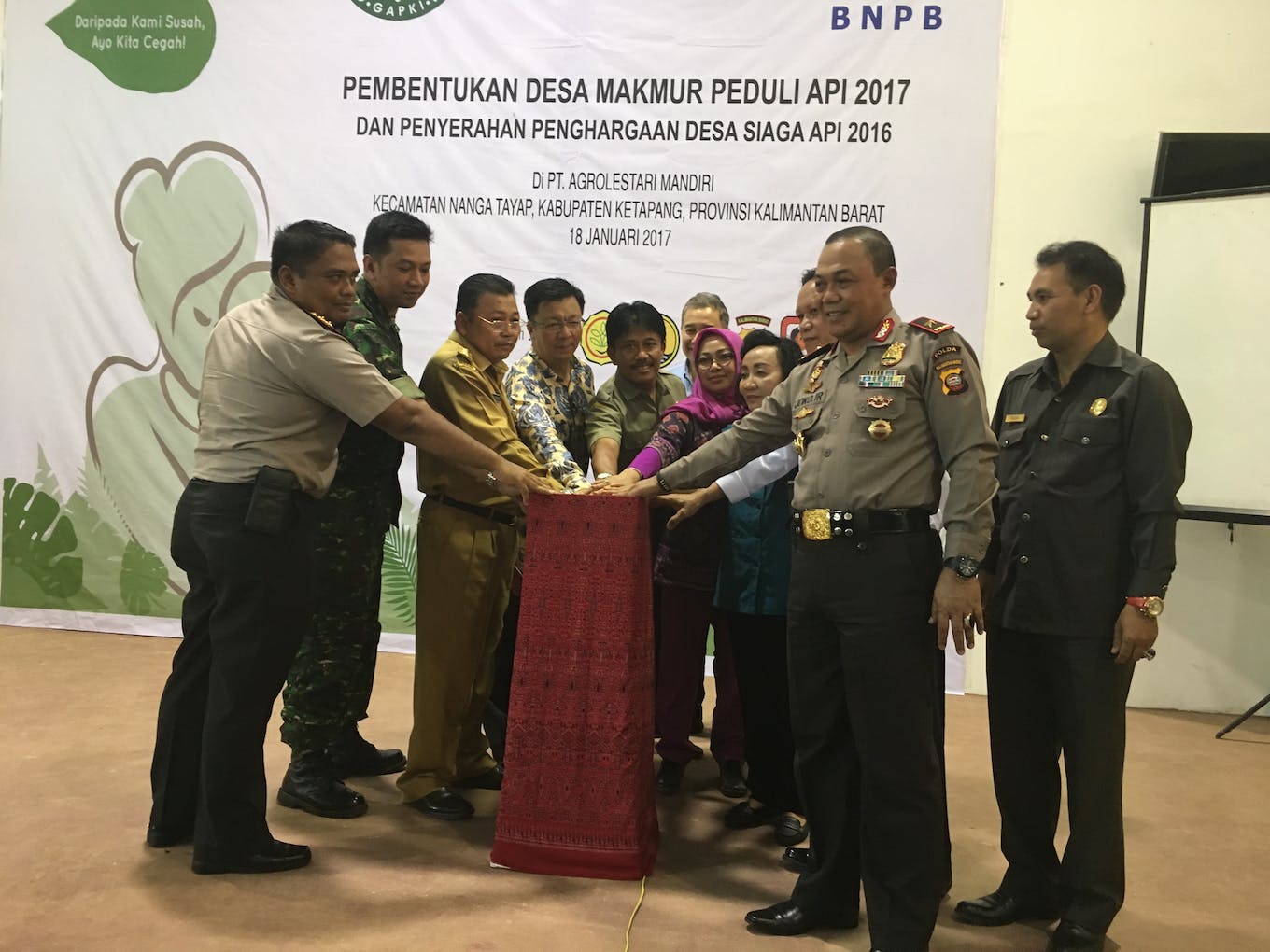 At the end of an all-day event to mark the successful completion of PT AMNL’s fire-free village programme, dignitaries including the governor of West Kalimantan, the chief of police and the regional head of Sinar Mas’ plantations, pledge to support the next phase of the programme, Desa Makmur Peduli Api, which roughly translates to prosperous fire-free villages.

The idea is that the more capable the villages are of feeding themselves, the less likely forests will be burned to make way for palm oil plantations. 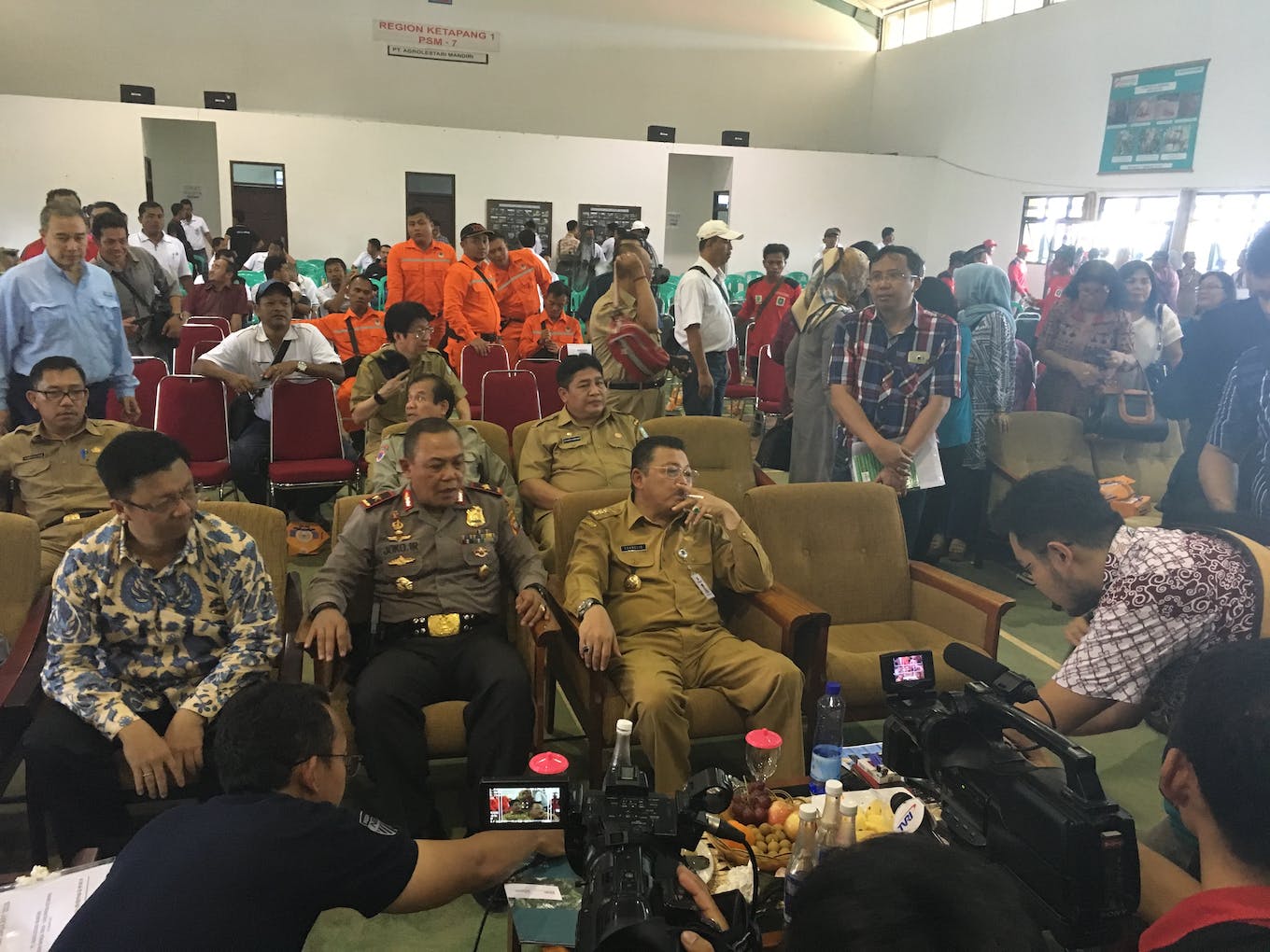 The governor of West Kalimantan, Cornelis M.H., enjoys a cigarette during a press conference at an event to mark a successful fire-free village programme on an estate of GAR-owned PT AMNL.

The charismatic, military-styled governor had earlier said in a speech that as the price of rubber was falling, GAR was needed to help stabilise poverty and food security in a region where 380,000 people live below the poverty line.

Check out our accompanying special report: How a palm oil company is fighting slash and burn culture