In pictures: forest clearing by the Tanjung Puting National Park

A park the size of Bali, Tanjung Puting is a tourist destination in Indonesia’s Central Kalimantan region and home to the world-famous yet critically endangered orang-utans.

Greenpeace has in recent years been highlighting the role of palm oil plantations in the destruction of critical orang-utan habitats by deforestation. Palm oil is an in-demand ingredient used in many consumer products, such as from soaps to chocolates, explained the NGO.

The photos taken were a result of a recent flyover conducted over Borneo. Kemal Jufri and Ulet Ifansasti, winning World Press Photo photographers, captured the attention-grabbing moment, wherein excavators were seen clearing peatland forests. In one image by Jufri, particularly, he was able to frame a before-and-after scene of deforestation. The left side shows a clump of trees while the right side presents the absence of peatland forests, replaced with new drainage canals instead.

If this is what sustainability looks like, then consumers have every right to demand guarantees that Wilmar stop laundering palm oil from forest destruction to the global market

Such a supply chain – from subsidiary to supplier to main palm oil firm – leads to “dirty” palm oil in the market, noted Greenpeace.

“If this is what sustainability looks like, then consumers have every right to demand guarantees that Wilmar stop laundering palm oil from forest destruction to the global market,” said Bustar Maitar, head of the Indonesia forest campaign for the NGO.

Bumitama Agri clarified the sustainability of their operations in a press statement, however. They said: “After conducting its own investigation, the Group noted that there were compliance gaps found in its adherence to the strict RSPO Principles and Criteria, mainly in the New Planting Procedures.”

“The Group had started activities before complying with the procedures required under the RSPO Principles and Criteria. Notwithstanding the non-compliance, the Group did not destroy the forest or kill any orang-utans. It also did not plant in Tanjung Puting National Park as alleged,” they added.

The RSPO or the Roundtable for Sustainable Palm Oil is an international organisation advocating for palm oil sustainability, complete with a set of guidelines for all its voluntary members under its Principles and Criteria.

But Greenpeace International is wary of the RSPO, citing their inadequacies in several past media statements and investigative reports.

According to the NGO, Bumitama claimed to have stopped development in one concession early this year and yet in a Greenpeace mapping analysis, it was discovered that the company cleared over 1,150 hectares in this concession.

Wilmar International, responsible for more than one-third of the palm oil processing market worldwide, is a cornerstone investor in Bumitama Agri, the environmental group highlighted.

The following images represent the extent of the deforestation caused by the palm oil industry, said Greenpeace. 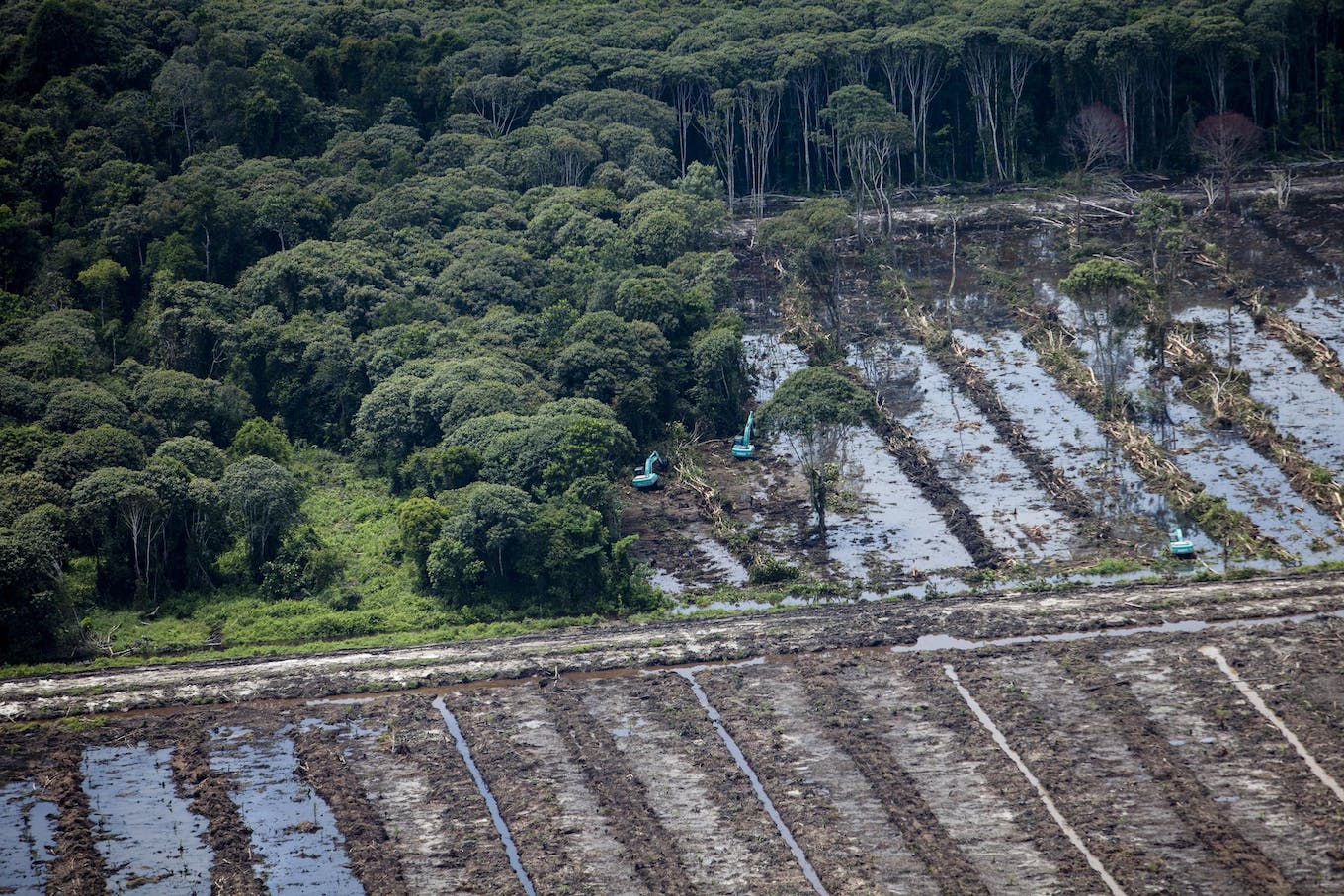 This oil palm concession, next to the Tanjung Puting National Park, is owned by PT Andalan Sukses Makmur, a subsidiary of Bumitama Agri Ltd. A couple of excavators (seen in the middle of the photo) are clearing intact peatland forests and building drainage canals, Greenpeace explained. They alleged that this is home to several endangered animals like orang-utans, proboscis monkeys and ramin. 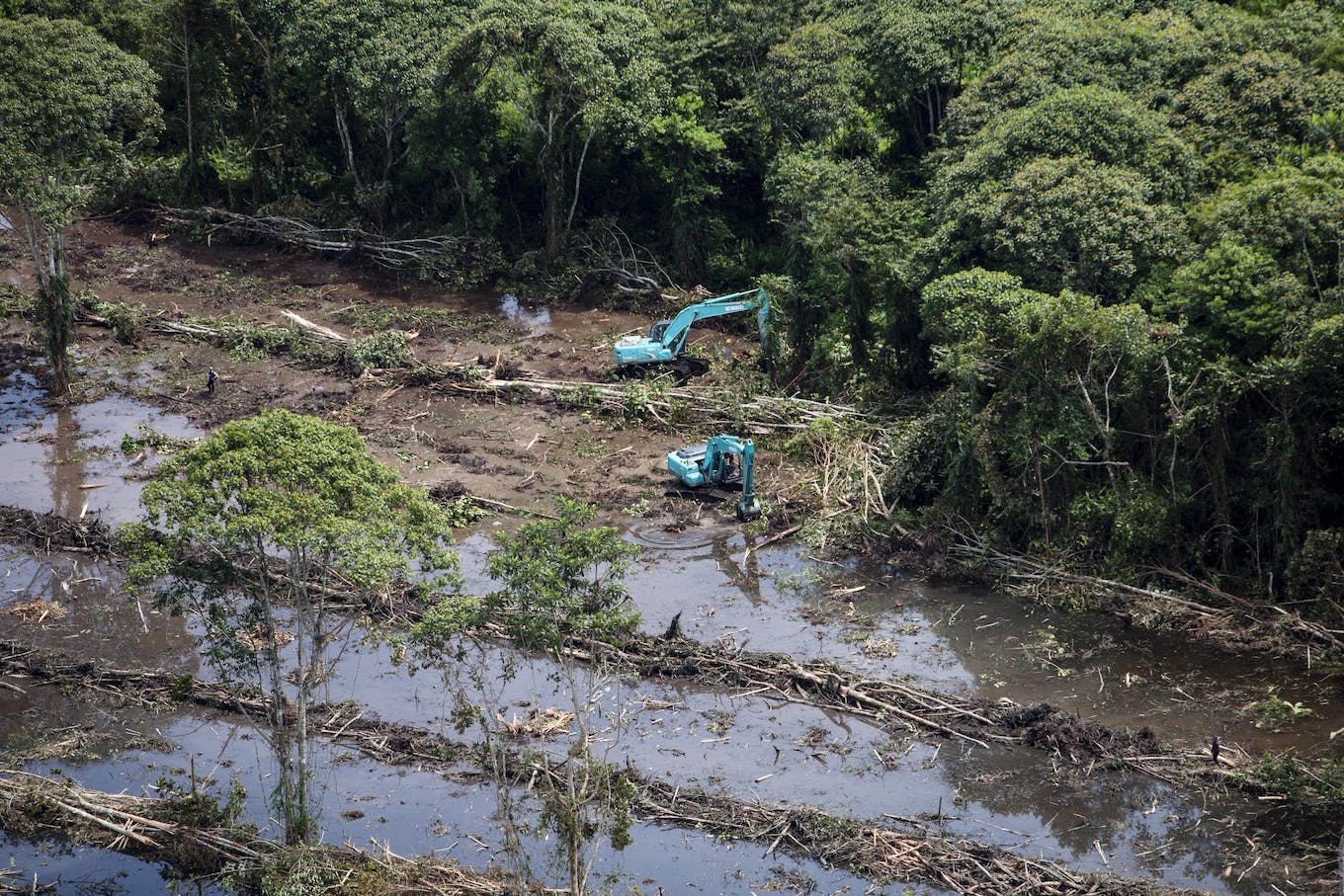 This photo, by Kemal Jufri, is a close-up shot of the excavation in the Andalan Sukses Makmur concession. Aside from thwarting biodiversity conservation efforts, clearing peatland forests such as this is damaging to the climate, said Greenpeace in their previous reports. Peatlands are major carbon sinks and their destruction releases a significant amount of emissions.

In their mapping analysis and field investigations, large-scale development in the concession were noted between February and October 2013, including clearance of intact peatland forests within buffer zones identified as high conservation value (HCV) forests, said the eco-group. 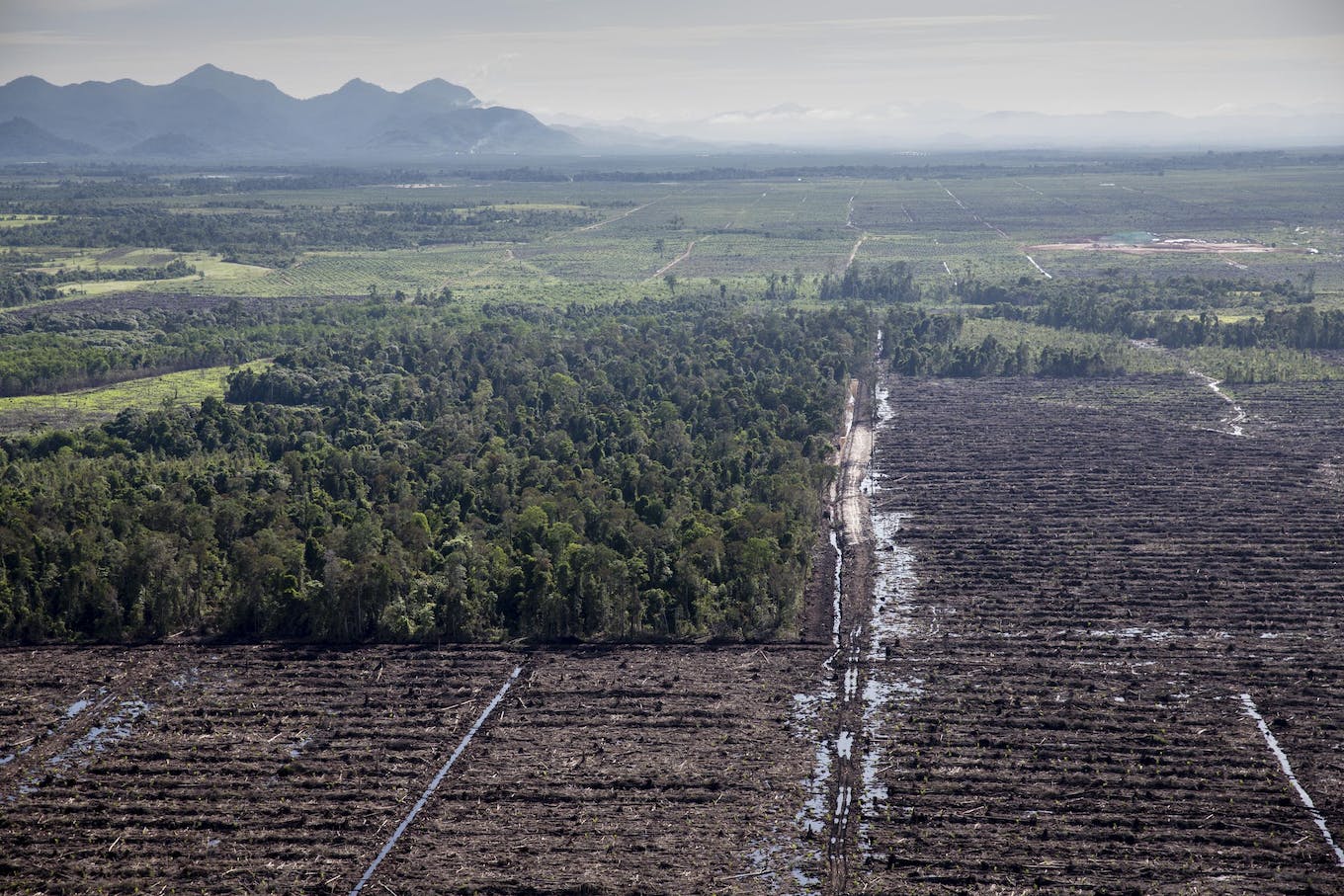 From a close-up shot of the clearing operations to a more wide-angle image, this photo, also by Jufri, shows the scale of the deforestation. According to Greenpeace, this is a concesssion owned by PT Ladang Sawit Mas, another subsidiary of Bumitama Agri. Located in Nanga Tayap sub-district of Ketapang in West Kalimantan, this area is supposedly the home of orang-utans and Müller’s Bornean gibbons. However, over 1,150 hectares of forest have been allegedly cleared between December 2012 and October 2013, said the eco-group based on their mapping analysis and on-site investigations.

They added: “The palm oil sector is the greatest single cause of deforestation in Indonesia. Ministry of Forestry maps show that Indonesia is losing some 620,000ha of rainforest every year, which is an area greater than the size of Brunei.”