Dramatic cost reductions mean wind and solar can now compete on price with conventional sources of energy in many parts of the world, including the UK.

This turns the spotlight onto the so-called “whole system costs” of integrating renewables into the electricity system, which include backing up intermittent generation and strengthening grids. In a report published this week, the UK Energy Research Centre (UKERC) reviews the latest evidence, finding that these costs are “modest” – probably of the order of £10 per megawatt hour (MWh), even if wind and solar double their output from today.

But the UK needs to keep investing and upgrading its electricity grid, regardless of the mix of generating technologies. A more flexible grid would help secure electricity supplies and keep the integration costs of renewables to a minimum, offering savings of up to £8bn per year by 2030.

Carbon Brief explores the debate and the evidence around whole system costs.

The UKERC review updates a similar study from 2006, which found integration costs for wind and solar would be around £5-8 per megawatt hour (MWh). The new review draws on evidence from around 200 reports containing thousands of data points from around the world.

Summing up the changes over the past decade, Dr Rob Gross, UKERC director, told a press briefing in London:

Indeed, the latest UK evidence collected for government shows onshore wind and solar are already competitive with gas. By 2025, the evidence shows they will be the cheapest sources of electricity generation in terms of price per MWh. (Note that this comparison includes CO2 pricing). 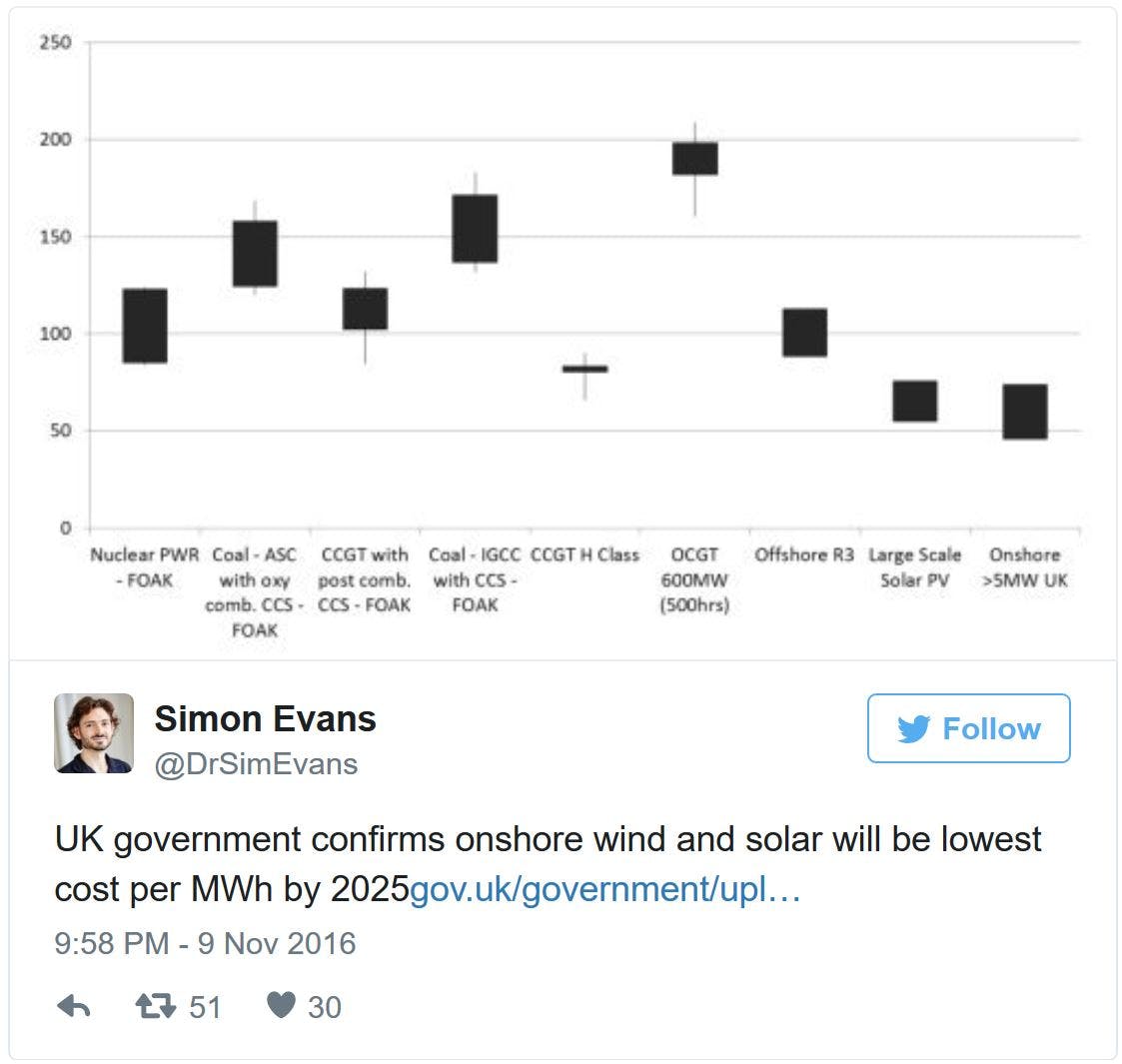 Wind and solar may be getting cheaper, but critics say these prices exclude costs imposed on the electricity system as a whole. Others say each electricity generating technology offers a range of different services to the grid, that cannot be valued in price per MWh alone.

In Autumn 2014, the government responded by commissioning a series of studies to investigate the whole-system costs of renewables.

The three-phase project was later touted in a Mail on Sunday article, which quoted a “senior energy source” saying: “It may well turn out that certain kinds of renewable energy are not quite as cheap as we thought.”

The first part of this research, carried out by Frontier Economics, was completed many months ago. In July 2016, ministers told parliament it would be published “in due course”. They said the same in, November and December 2016.

Despite efforts to force publication, however, none of the findings have ever emerged, with some renewable supporters suggesting this is because they will show that integration costs are low. Meanwhile, high estimates of system costs are routinely cited by those who oppose climate policy.

One of the most important messages from our report is that there’s no single answer to how much does it cost to integrate renewables.

There are a variety of ways renewables can impose costs on the system, from the need to back up intermittent supply to strengthening grids. The UKERC review lists six categories of impact. It also emphasises that costs under each heading overlap, so that they cannot simply be added up.

Before we look at each category in turn, it’s worth adding that cost estimates vary widely. Gross tells Carbon Brief: “How much it will cost to integrate renewables into a power system depends entirely on how flexible that system is, and it also depends on geographical factors.”

“One of the most important messages from our report is that there’s no single answer to how much does it cost to integrate renewables…The most important thing that policymakers should be thinking about in the energy domain is how to make systems that are smart and flexible and that can take advantage of the low-cost resource that’s available from renewables, and integrate them into the system in a cost-effective way.”

The first way renewables can add to system costs is by raising reserve requirements. Grid operators already need to hold flexible generators in reserve, in case conventional power stations break down without warning.

UK short-term reserves have already expanded to cater for large offshore windfarms. Intriguingly, this means they are now also sufficient to cater for breakdowns at the planned Hinkley C new nuclear plant, showing how difficult it is to pin system costs on individual projects or technologies.

The second category of costs listed by UKERC is maintaining enough capacity to meet peak demand at all times. These are around £4-7/MWh at 30 per cent penetration, it says. They will rise to no more than £15, it adds, even if wind and solar supply half our electricity, yet contribute nothing at all to meeting peak demand.

The third area of costs comes from strengthening electricity transmission networks. The grid already needs a rolling programme of renewal and expansion. As solar and wind expand, the additional cost could be £5-20/MWh and, again, the top end relates to inflexible grids.

Expanding electricity networks – for example, by building interconnectors to other countries – brings benefits to the whole system, UKERC notes. This means it is “misleading” to allocate the full costs to renewables.

A related area of costs is curtailment, where windfarm output is wasted because there is not enough grid capacity to get the power to customers.

Curtailment is “generally very low”, UKERC says. Investments in electricity grids can reduce it further, while raising network costs. Again, this shows how system costs can overlap or trade off against each other.

The fifth type of system cost relates to the efficiency of conventional power stations, which can be impaired if they have to turn on and off in response to variable renewable generation instead of operating steadily. UKERC says the majority of studies finds this impact to be “very small”.

Finally, the increase in renewables and reduction in fossil fuel plant changes the resilience of the electricity system by reducing a quality called inertia, which traditionally stems from the spinning mass of steam-driven turbines.

Costly changes in system inertia are only likely to become significant when wind and solar pass 50 per cent grid penetration, UKERC says.

The overlaps between different types of system costs mean these category-by-category cost estimates “cannot be simply added together to determine the total systems costs”, UKERC says.

As Gross explains: “Many of us would like to say that the answer is six or the answer is 11. Unfortunately, it’s a little bit more complicated than that.”

Gross and his co-author, Phil Heptonstall, a UKERC research fellow, tell Carbon Brief that at 30 per cent penetration for wind and solar – roughly double today’s level – the total for the two most significant categories of system cost amounts to around £10/MWh. Heptonstall tells Carbon Brief:

“This excludes outliers, either because they assume an all [solar] PV scenario and/or they use an approach which has come under substantial criticism. It also excludes transmission and network reinforcement costs on the basis that such reinforcements confer benefits on the whole system, not just variable renewables. It is a simplification, but in our view, not an unreasonable one.”

A more reliable way to estimate whole system costs, UKERC says, is to take a whole systems approach. This means creating a model to simulate the electricity system, then comparing versions with and without high levels of wind and solar.

If you’re not doing that, Batten says, “I would take [the] results with a pinch of salt”. There are already a number of published studies that use a whole systems approach, several of which were included in the UKERC review. Their findings are similar to Gross and Heptonstall’s simplified estimate of around £10/MWh.

In a medium flexibility electricity system, total integration costs for wind and solar would average between £10 and £14/MWh during the 2020s, according to one study from NERA Economic Consulting commissioned by power station Drax.

In a report commissioned by the Solar Trade Association, Aurora found solar integration costs would reach no more than £7/MWh. This estimate assumes solar capacity increases from today’s 11 gigawatts (GW) to 40GW in 2030. If battery costs fall faster than expected, solar integration could be a net benefit to the electricity system (see chart, below). 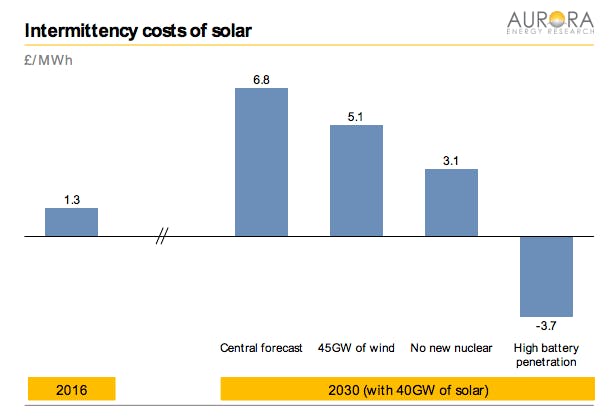 Another whole system study, from Imperial College on behalf of several energy firms, finds integration costs in 2030 ranging from £6 to £48/MWh. This range is capped at no more than £17/MWh, as long as the system includes a small amount of additional flexibility compared to today’s levels (see chart). 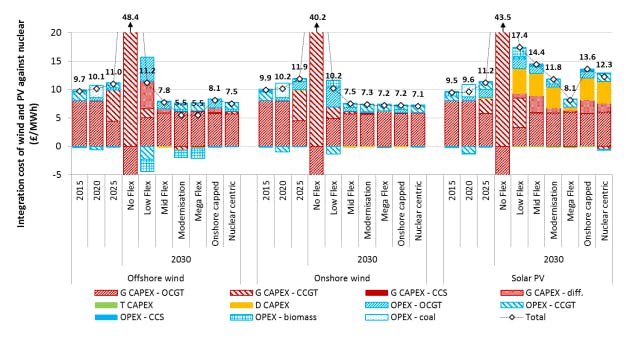 Earlier work from Imperial, carried out for the Committee on Climate Change (CCC), found system integration costs in 2030 of between £6 and £9/MWh, if the electricity sector makes its recommended contribution to the UK meeting climate targets.

The idea that wind and solar impose significant, hidden costs on the electricity system has become a staple of (at least some parts of) the political debate in the UK. The topic is ripe for exploitation, given its complexity and the very wide range of estimates for integration costs.

UKERC’s review is an attempt to summarise all of the evidence on the costs of intermittency. Its main message is that costs can be minimised if system flexibility is increased. Ministers recognise the need to modernise the electricity system and are seeking views on how to go about this.

This review is also an opportunity to recognise that the base cost of generation, per MWh, is a limited way to measure usefulness to the electricity system.

There is a growing movement among energy system experts to shift away from levelised costs per MWh towards attempts to value the time, location and flexibility of generation. Frontier Economics, the authors of the government’s long-awaited system costs review, also line up behind this idea.

In a brief report on the issue, Frontier backs a nuanced approach to system costs, based around reforms of the electricity markets and policies, such as the capacity market. It says:

“While it’s tempting to believe that these forgotten costs can be incorporated into existing support schemes through the judicious use of simple technology uplifts or penalties, this isn’t the best approach, not least because the necessary adjustments will prove very difficult (and controversial) to calculate.

“Rather than trying to solve these problems through low-carbon support mechanisms, policy makers should focus on revising their market and charging frameworks to make all actors – conventional and low-carbon alike – better accountable for their whole system impacts.”

Still, if integration costs add somewhere in the order of £10/MWh to renewable costs, as the UKERC review authors tell Carbon Brief it is reasonable to assume, then onshore wind and solar will remain among the cheapest ways to generate power in the 2020s.