Hydrogen’s day in the Asian sun

French utility Engie has developed a hybrid solar hydrogen power solution which it says will revolutionise the way off-grid communities across Asia gain access to the crucial energy it needs.

Across Asia Pacific, some 615 million people out of its 4.2 billion population still live in energy poverty.

Many of them live in off-grid, remote areas which makes it all the more difficult to gain access to electricity. As a result, most of these communities resort to using diesel generators – which are both expensive and polluting – to meet their energy needs.

It doesn’t have to be this way, however. French utility Engie believes there is an alternative to diesel-fired power generation in remote areas, and that the future lies in renewables.

It joins a number of European energy firms that in recent years have moved its focus away from traditional oil and coal projects into developing clean energy solutions.

Speaking at a recent panel discussion in Singapore in June titled “An energy for the future, today: Why hydrogen now?”, Quentin Vaquette, project manager of hydrogen solutions at Engie Asia Pacific explains that the time is ripe for the entry of hydrogen into the mainstream energy market in Asia.

“The biggest application initially will be in the off-grid world, where fossil fuels – diesel or heavy fuel oil – are used for the generation of electricity”, explains Vaquette.

In these communities, there is a high cost of electricity, black-outs are common due to the unstable power supply, and there are high logistical costs as well as intensive carbon emissions, he points out.

Engie’s response to this problem is a hybrid solar hydrogen power plant (called SHPP) which relies on a simple concept. 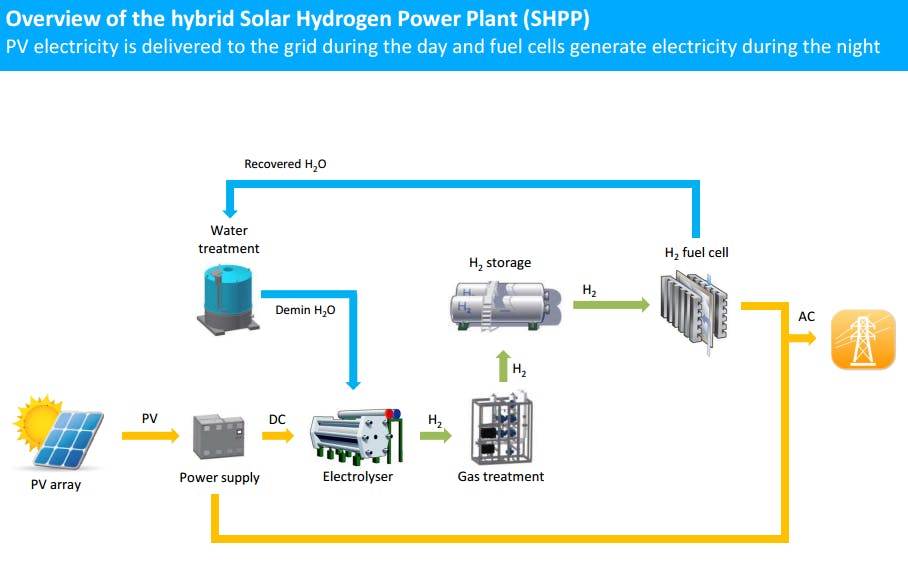 Crucially, it overcomes the main disadvantage of renewable energy such as solar – its intermittency. “This will allow us to use hydrogen to supply electricity at night when needed by our customers,” he says. Furthermore, this energy is produced locally at predictable cost and is entirely renewable, he adds.

Vaquette notes that, across the world, the total amount of electricity produced using diesel or heavy fuel oil exceeds 800 terrawatt hours (TWh) each year. This is more than the combined electricity consumption of Thailand, Indonesia, Malaysia and Australia, so there is a huge opportunity to introduce the technology.

While the technological concept has been demonstrated before across Europe and North America, there are few commercial projects and Engie is determined to bring this technology out of the research and development (R&D) space and into the marketplace to make it available for its customers.

Engie is not new to the off-grid space. Last year, the company launched a solar and smart energy storage project on the French island of Corsica, which generates enough electricity to cover the needs of more than 1,000 households.

The company is currently targeting Asia Pacific for its first solar-hydrogen project. Vaquette estimates that it will take roughly a year to build the first 1 megawatt (MW) project, and the company is hoping to start building its first plant by next year.

Till today, the electricity industry across the world has been able to integrate renewables into grid systems only because there are fossil fuels to make up for the unpredictability. But with the world’s nations signing the historic Paris Agreement to tackle climate change, there is an urgent need to decarbonise the global economy.

“To do this, we have to replace fossil fuels with renewable energy sources. Hydrogen and battery storage will play an important role, and hydrogen provides the additional benefits of being a fuel that can be transported to where it is needed,” he says.

A future energy landscape where hydrogen is a common fuel is not so far off, says Vaquette. In Asia, Japan, for instance, is leading the way with significant policies and industrial activity in this field.

We have to replace fossil fuels with renewable energy sources. Hydrogen and battery storage will play an important role, and hydrogen provides the additional benefits of being a fuel that can be transported to where it is needed.

“Large-scale production of renewable hydrogen using electricity from solar photovoltaic is starting to make economic sense and it might at one point compete with natural gas,” he adds.

Asked if there were concerns that hydrogen is an explosive gas, Vaquette notes that hydrogen is a fuel and like all fuels it should be treated with care and adequate safety measures. When handled appropriately, it is comparable to natural gas, which is used commonly in many countries and industries.

Part of the cocktail

Also speaking at the event, Teddy Püttgen, senior director at the Energy Research Institute at Nanyang Technological University (ERI@N), notes that as the world continues to seek low-carbon energy solutions, hydrogen will indeed be part of the “cocktail” of energy sources needed to power the global economy.

“Hydrogen is becoming this new ingredient… we need to look at each country, case by case, to see which energy sources best suit their needs,” he notes.

He sees the largest potential of hydrogen in the transport industry. In Singapore, for example, there is a large fleet of taxis in a confined geography. “If you can replace fossil fuels with hydrogen, the advantage of hydrogen cars is that you can recharge and fill it up more easily than compared to electric cars, which can take hours to charge up,” he explains.

Puttgen is also leading an effort in Singapore to test the integration of various clean energy sources – including hydrogen – in a micro-grid.

The initiative, called REIDS (Renewable Energy Integration Demonstrator in Singapore), is led by NTU and supported by the country’s Economic Development Board, National Environment Agency and Engie.

It is the first micro-grid project of its kind in the region and the largest hybrid micro-grid in the tropics which will test and demonstrate the integration of solar, wind, tidal, diesel, storage and power-to-gas technologies, and ensure these energy sources operate well together.

Micro-grids are key to meeting the need for electrification of hundreds or thousands of islands in the Southeast Asian region that are not connected to the main power grid, he notes.

Indonesia, for instance, is aiming to install micro-grids that will bring electricity to 90 per cent of its off-grid population by 2025.

Vaquette is confident that the time has come for hydrogen to take its place in the sun in Asia.

As the region seeks to solve the “energy trilemma” – that is, the need to increase energy generation quickly, keep electricity affordable, and reduce greenhouse emissions – both the private and public sector will have to use a mix of clean technologies.

“The world of energy tomorrow will not be the same as today. The use of coal and carbon sources for energy is decreasing, and for this transition, there is no silver bullet solution,” he says.

“The idea is to take technologies that make sense in a niche market first and incrementally introduce them in new markets,” he adds. “We see the immediate potential of this technology, and that’s why we’re trying to transform it into a reality now.”