How useful are green rankings?

How useful are sustainability indices like Newsweek’s Green Rankings in helping investors and consumers understand a company's true colours?

There is an unmistakable sustainability tide sweeping across the private sector, as consumers and investors alike become more aware of the environmental impact of businesses.

As companies try to distinguish themselves by showcasing their responsible business practices, they increasingly look to independent sustainability rankings to bolster their green credentials.

Some of these rankings – developed to score companies on their performance on environmental, social, and governance (ESG) factors – include  the Financial Times Stock Exchange’s FTSE4Good Index Series, the Dow Jones Sustainability Indices (DJSI), and Canadian media house Corporate Knights’ Global 100 index, among others.

In the United States, American magazine Newsweek’s Green Rankings, which assess the performance of the 500 largest publicly-traded companies by market capitalisation in the United States and the world, has gained prominence in recent years.

Elijah Wolfson, senior editor at Newsweek, notes in a statement that “in the current global business and political climate, no company can continue to ignore its environmental footprint”.

The Newsweek Green Ranking hopes to encourage more corporate leaders to start looking at their environmental impact in a more comprehensive manner, he adds.

Launched in 2009, the annual ranking evaluates firms on eight indicators.

These include the ratio of energy and water use; greenhouse gas emissions and waste generation to a company’s revenue; the environmental impact of this income; and existence of a mechanism to link chief executive officer’s pay to environmental performance targets, among other things.

Newsweek collaborated with Corporate Knights and US advisory firm Human Impact + Profit (HIP) Investor to create this year’s ranking. While Corporate Knight’s own ranking focuses on a broad range of governance factors including taxes paid and gender diversity on a company’s board, Newsweek’s list is focused more closely on environmental factors.

According to the publication, the methodology is “comprehensive in the sense that it captures a company’s main environmental impacts, as well as reputational and legal challenges related to the environment and a company’s approach to environmental management”. 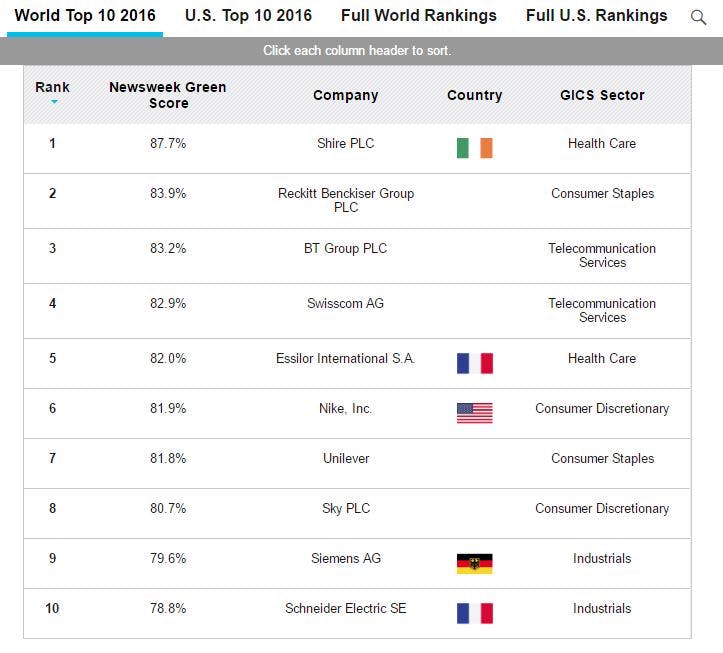 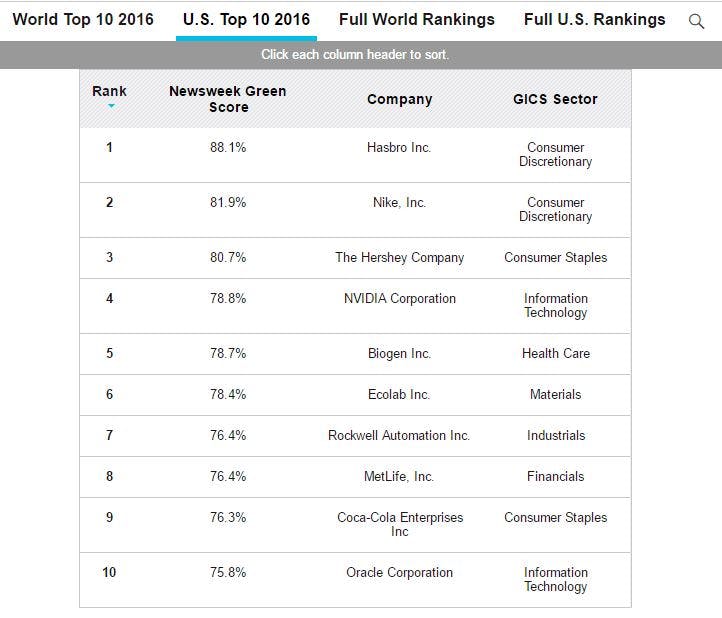 Newsweek’s top 10 green companies in the US. Image: Newsweek

SingTel out-performed its local counterparts, coming in at 141stspot.

Andrew Buay, vice president of group corporate social responsibility at SingTel, notes that the Newsweek ranking “helps us to understand where we have done well, and where else we have opportunities to improve”. For instance, the firm fared better than most peers in terms of energy productivity, it ranked lower on carbon productivity, shares Buay.

Even as the company aims to improve its overall performance by exploring alternative energy sources, it is also pursuing improvements that Newsweek’s ranking does not measure, adds Buay.

These include carrying out a Life Cycle Assessment of its entire operations and analysing how climate change will affect its critical infrastructure, such as energy and transport grids.

“While we are pleased to be recognised in the Newsweek Green Rankings, we believe there is much more we need to do,” says Buay.

While companies may see their performance on such rankings as a validation of their environmental efforts, observers note that investors and consumers also use these scores to help them make spending decisions.

Toby Heaps, chief executive officer of Corporate Knights, notes that the ranking serves two key purposes. First, the scores give investors an insight into the company’s operational efficiency, and also indicate the extent to which a company is creating negative environmental externalities.

Since a lower environmental impact generally leads to fewer economic, social, and legal risks, and investors can gauge whether a company is liable for costs in the future, or has the potential for long-term value creation, says Heaps.

He adds that the ranking, which ranks the top 500 companies automatically with no opt-out option, assesses companies on public data such as information from financial researchers Bloomberg Professional Service and sustainability data outfit CDP, formerly known as the Carbon Disclosure Project.

“If a firm does not report on a metric, you get a zero for that criterion,” explains Heaps. “In addition to evaluating operational efficiency, this is also a transparency ranking,” he adds.

Given that the Newsweek ranking factors in the social and environmental good linked to a company’s revenue, a strong performance on the index could also hint at the wider value of their product or service, says Heaps.

Jeanne Stampe, Asia Finance and Commodities Specialist at the World Wide Fund for Nature (WWF), adds that while a high score on Newsweek’s ranking and similar initiatives sends a strong affirmative message for investors, a poor performance is also a powerful motivator for firms and financiers alike.

A poor performance on the rankings means that the company is failing to manage its ESG-related risks, and could warrant an adjustment of its credit profile or growth potential by investors, she adds.

However, investors which are just starting to integrate ESG into their decision-making are likely to pay more heed to the rankings than more advanced players who have developed their own ESG assessment strategies that go beyond simple rankings, notes Stampe.

But proceed with caution

Despite the utility of such rankings, they do not necessarily capture the complete picture of a company’s environmental stewardship, say corporate sustainability experts.

As Heaps puts it: “I would be really cautious about saying that if a company is in the top 50 of this ranking, then it is automatically green.”

At best, the list is a “decent starting point” for investors and consumers to identify a shorter list of sustainable companies and then apply their own values to assess them, he adds, pointing out that some firms in the ranking may still be linked to deforestation, unsustainable seafood use or biodiversity losses.

Tamar Lawrence-Samuel, associate research director for US-based non-profit Corporate Accountability International, adds that anyone wanting to understand the sustainability of a company on the ranking should look at additional factors beyond what the Green Rankings measure.

“One of the major missing pieces is an assessment of the corporation’s political activities,” she notes. This includes its political spending, lobbying activities, and even the funding given to universities in a bid to influence their research.

For example, food and beverage giant Coca-Cola is ninth on the US-specific ranking and 183rd on the global list, but has been accused by activist groups of depleting water supplies around the world, and lobbying against policies to increase tap water and reduce plastic waste, among others.

Ultimately, observers should know that rankings like Newsweek’s offer investors and consumers a partial view only, and they need to do look beyond them to get the full picture of a company’s environmental and social impact, says Lawrence-Samuels.

WWF’s Stampe adds that any sustainability ranking can boost its credibility by including features such as science-based criteria, meaningful and equitable stakeholder participation, and focusing on the company’s efforts to minimise negative environmental and social impacts, as well as creating benefits.

Ideally, rankings should also strive to do more than provide a relative assessment, adds Stampe. When companies are only assessed against one another, this only offers a relative measure of their performance, not an absolute one, she explains.

So unless there is a minimum score needed to clinch the top spots on such indices, even the highest performers are not guaranteed to be leading on the environment.

“A ranking or index should have some minimum performance requirement in order to qualify,” Stampe says. “Then, the question is whether this bar is set high enough.”