How I got here… Olam sustainability VP, Moray McLeish

A curious obsession with Borneo is where Moray McLeish's personal sustainability journey began. The Scot, who has lived and worked in Indonesia for the last 25 years, wonders why companies are always seen as the bad guys.

Moray McLeish, the vice president of corporate responsibility and sustainability, Asia, for Singapore-listed agribusiness company Olam, has been in the sustainability game for 25 years, and is rare in that he has worked in all parts of the sector—government, civic society and business.

Starting out his career with the British government in the Department of International Development, which promotes sustainable development and tackles poverty overseas, the Scot then moved to International Finance Corporation as a programme manager, then had a stint with non-government group World Resources Institute working on sustainable palm oil, and then on to PriceWaterhouseCoopers, where he was a sustainability advisor. Almost all of his career has been spent in Indonesia, and the last five years with Olam, one of the world’s biggest producers of cocoa beans, coffee, cotton and rice.

Having experienced the sector from all angles, McLeish can empathise with all kinds of sustainability folk, from the corporate sustainability officer to the environmental activist—and Olam has had its fair share of attention from the latter over the years, including a campaign that highlighted deforestation in Gabon in 2017. He has from a young age been driven by an ambition to save the rainforest, but he believes that big businesses, like the US$26 billion giant he works for, can be as much a part of the solution to protect forests as environmental groups. “I definitely feel that I’m working for the greater good,” McLeish told Eco-Business from his home in Bogor, a city to the south of Jakarta.

He also believes that his career has unfolded over an interesting period of history. “The attitude towards sustainability didn’t change much between 1970 and 1995, when I started out. But after the mid-90s, it changed massively. I’ve been very lucky to work in sustainability at this time.” he said.

I often wonder why companies are always seen as the bad guys, when they are able to deliver really good things for society.

Speaking to Eco-Business after a month in self-quarantine during the coronavirus pandemic, McLeish talks about his curious obession with Borneo, his admiration for people working in the field, and finding a balance between short and long-term business motivations.

I studied land economy at the University of Aberdeen. I was supposed to be a property surveyor, but I realised quite early on that inspecting buildings wasn’t for me. As soon as graduated I chose to do something completely different.

What prompted you to move into sustainability?

From a young age, I’d aways wanted to save the rainforest, and in the early 1990s concern about rainforest destruction had entered the mainstream (in the 1980s, it was still considered hippyish to fret about forests). I’d developed a strange obsession with going to Borneo after my geography teacher said “there are still headhunters there”, and after I graduated I wrote to lots of environment groups asking about opportunities to volunteer. The only response I got was from a Dayak community rights group called Plasma, who accepted my request to volunteer for them. But before I arrived, the group was shut down by the government, because they’d been critical of the Suharto regime’s approach to indigenous rights. 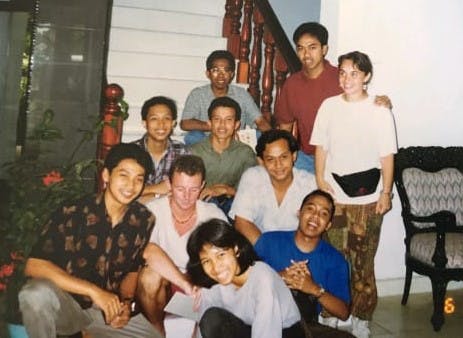 McLeish with colleagues on a project for CIFOR in Jambi, Indonesia in 1996. Image: Moray McLeish

So I scrabbled around and managed to get a position at CIFOR (Center for International Forestry Research) as a volunteer. My manager realised that I might be a useful additional pair of eyes, and sent me to Kalimantan to help out with a project. I was also involved in a forest monitoring project in Jambi, Sumatra. I’m still friends with the people I met back then, in 1996, who are still working in this field.

Who has been your career mentor, and what was the most valuable thing you learned from them?

No one person. There are a lot of committed people in this field whom I admire. I’ve always felt that I’ve had the easier end of the job, working in big NGOs, the public sector, then Olam, on the policy side. People who work in the field work really hard with low budgets in rural areas fighting fires every day; local governments asking them for paper work, looking for problems, landlords putting the lease up, leaking roofs, cars in need of fixing. There’s always something. Meanwhile someone like me is asking them for sustainability data.

I was involved in the creation of the Indonesia Timber Legality Assurance system (INDO-TLAS) in 2003. Indonesia was the first country to create a system that identified and tracked legal timber, which was endorsed by the European Union. That was major achievement. You wouldn’t have put money on it being successful at the start. My parents had waved me off to Borneo expecting me to come home and get a ‘proper job’ in surveying. It was after the creation of INDO-TLAS that I realised that I could make a real career out of sustainability.

What’s the hardest thing about your job?

Balancing the commercial imperatives of a business with the massive expectations of this [sustainability] sector on companies like ours. It’s about finding a balance between the short and long term, and there are a lot of competing incentives for many people. My colleagues buying and selling coffee have to deliver on a short-term basis, which makes it tough to deliver [sustainability] over the long term. We need to work out how we build for the long term without taking too many hits in the short term.

I couldn’t get out of bed and care about selling fridge magnets every day. In this job, I definitely feel that I’m working for the greater good. I often wonder why companies are always seen as the bad guys, when they are able to deliver really good things for society. Olam has access to thousands of farmers, and we can be a delivery mechanism for the admirable things NGOs and aid agencies want to achieve. Making that a reality is motivating.

What’s the best piece of advice you could give someone starting out in sustainability?

Don’t be fussy. Get yourself out there. Put yourself on someone’s door step. Be prepared to help. Be humble and remember that any experience is good experience.

Where do you think the main sustainability knowledge gaps are among students now entering the workforce?

It my limited experience of working closely with interns, I’ve found that generally they’ve been taught that NGOs are good and companies are bad. But one intern who spent some time with us realised that our company is doing some good stuff, and that NGOs are not always right—there’s a spectrum. Nuance is so important in education.

What’s the biggest mistake you’ve ever made in your career, and what you’ve learned from it?

One bit of advice I’d give is to never burn bridges. Sustainability is a small field. People you meet early on you’re almost certain to meet again. Of course there’ll be frustrations with some of the people you work with, but this sector is about working together and collaborating.

Related to that, I’ve noticed that people tend to work in one part of the sector, for instance government, NGOs or business, and don’t move between them. One of the things that I think I’ve done right in my career, probably less by design than good fortune, is that I’ve moved between sectors. That has helped me to understand what all sides are trying to achieve, and where the overlap is. I’d encourage anyone entering sustainability to get as much experience as they can in a number of different fields, so they get a real sense of the different challenges people face working in either business, NGOs or government.