How green is Asian tech? C+ at best: Greenpeace

Tech giants including Sony and Fujitsu are not making the grade when it comes to greening their operations. A new report calls out firms for a lack of commitment to renewable energy and a failure to account for emissions in supply chains.

Asia’s top technology firms are not pulling enough weight in addressing climate change, according to research by campaign group Greenpeace.

In its first-ever regional tech ranking report released last week, the group studied 30 firms and found that only two had pledged to use only renewable energy by 2030, with none committing to help their supply chains do likewise.

According to the report, 18 firms have net-zero pledges, where greenhouse gas emissions are offset or abated using technology. Among them, 14 firms have 2050 deadlines and only three included their supply chain.

The highest score given was a “C+”, which Greenpeace said shows how much more technology firms could improve, adding that they collectively used more electricity than the whole of Thailand in 2019.

“The tech sector brands itself as the industry of the future, but when it comes to climate action, tech giants like Samsung and Xiaomi remain trapped in the past,” said report author and Greenpeace East Asia climate and energy campaigner Xueying Wu.

How the companies fare 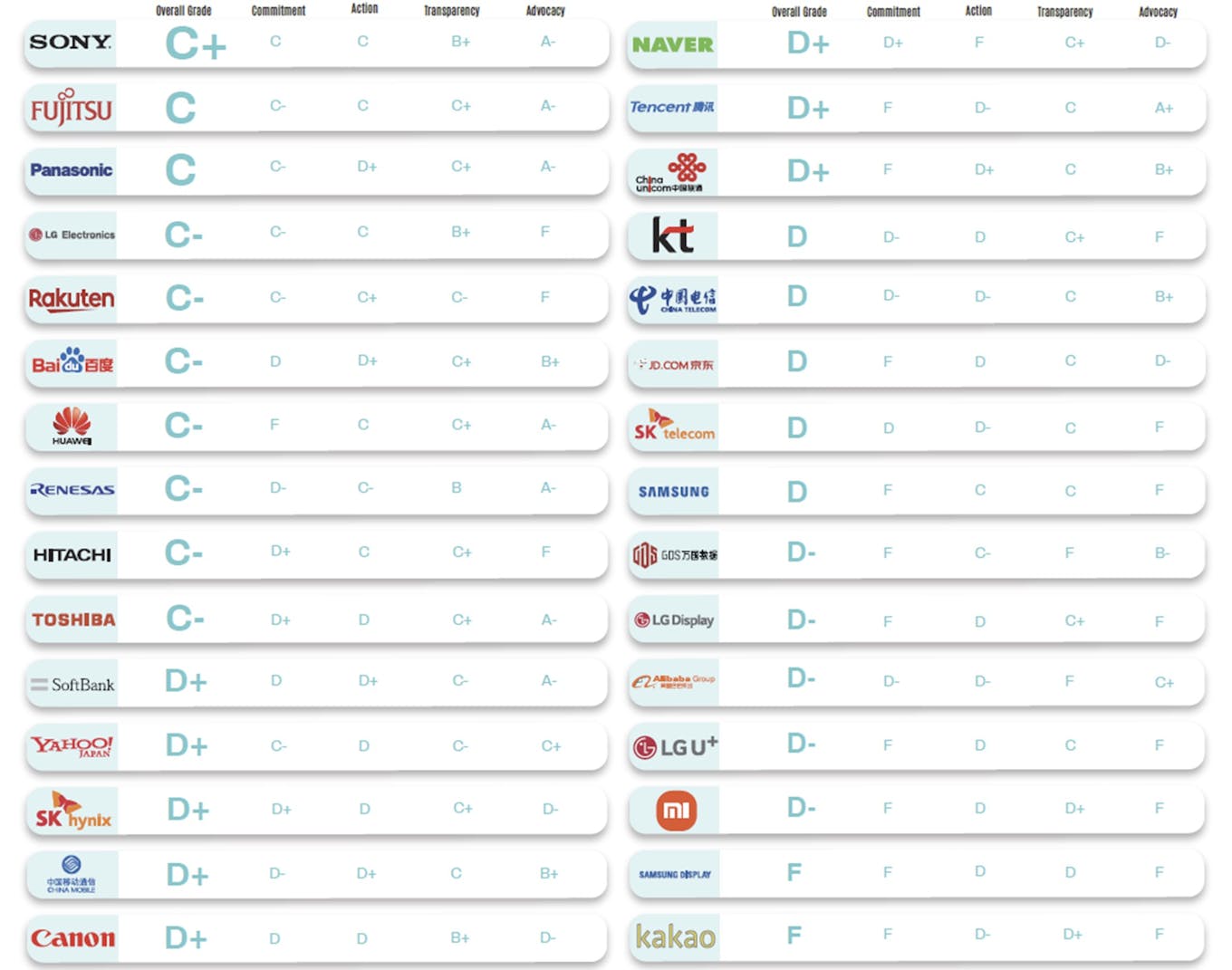 Greenpeace selected 30 Asian firms from the 2019 Forbes Top 100 Digital Companies list, based on their domestic market value and social impact. Ten firms each from China, Japan and South Korea were picked.

They were ranked by, with priority in decreasing order, their publicly-available climate commitments, ambitions, disclosures and advocacy.

Japan’s Sony Corporation won the top “C+” rating, by leading in two of the four criteria. It topped the climate commitment chart for its pledge to use only renewables by 2040. The firm, which discloses the emissions of its entire supply chain and make public how it crunches its numbers, also led in data transparency.

The bottom eight ranked firms failed to announce 100 per cent renewable energy targets. The bottom six firms have not disclosed the use of renewable energy in their operations. Greenpeace “failed” the lowest two companies, Samsung Display (a subsidiary of Samsung Electronics) and Korean internet firm Kakao, for having low climate commitment and poor advocacy.

Japanese firms finished higher in general, occupying 10 out of the top 15 spots. The bottom 15 were shared by eight South Korean and seven Chinese firms.

Greenpeace added that none of the 10 Chinese companies have made 100 per cent renewable energy pledges, compared to five of the Japanese and four of the South Korean firms.

Wu told Eco-Business she doesn’t see any reason for the differences based on country, instead pointing out that huge firms like Samsung Electronics are in the bottom half of the table, and could jeopardise climate mitigation efforts. Samsung Electronics is South Korea’s largest firm and the third largest consumer electronics maker globally.

“For the consumers, I think it is really important for them to know whether the companies that they support are making enough efforts to combat climate change,” Wu added.

Greenpeace said few technology firms have started acting on commitments they’ve made, pointing to only two of them using renewables in more than 20 per cent of their energy mix.

Wu added that supply chains must be accounted for, as they have been found to emit 5.5 times more carbon than that of companies which contract them. She said Asian firms could look to tech giant Apple for reference. The Amercian firm started helping its suppliers adopt clean energy six years ago and included them in their net-zero pledge.

Commenting on the report, Professor Seeram Ramakrishna from the National University of Singapore’s Department of Mechanical Engineering said the 2030 target is “laudable and lofty”, but the transition will take longer due to issues like cost, technical problems and a bottleneck on renewable energy.

Nonetheless, he said the technology sector has an “outsized” responsibility in renewable energy commitment.

“Scaling up of renewable energy as well as harnessing it involves deeper innovations and technical knowledge. The tech sector can analyse and understand them better than any other sectors,” he explained.

Ramakrishna added that the sector should also look to reduce its “materials footprint”, as the production of substances like metals and plastics make up over a fifth of the world’s greenhouse gas emissions.

Greenpeace has previously published reports in 2015 and 2017 on the energy footprint of the global IT sector. Wu said the group is looking to continue tracking the environmental performance of technology firms on a yearly basis.