How can Asia's sweltering cities be made more liveable?

Nowhere on earth is the human population growing as fast as in Asia’s cities.

As more people migrate to urban areas in search of better lives, so the pressure builds on policymakers to manage infrastructure and resources to ensure that Asia’s urban jungles remain sustainable places to live as they grow.

This is a daunting task. The Economist Intelligence Unit’s ranking of the world’s most liveable cities does not feature a single representative from Asia in a top 10 dominated by Australia, New Zealand and Europe. Only Tokyo, Osaka, Singapore and Hong Kong feature in the top 50, while Asian cities such as Port Moresby and Karachi are among the world’s least liveable places.

In the Indian city of Bangalore, which is predicted to grow from 7 million in 2015 to 21 million by 2100, urban growth has led to a 2 degrees Celsius increase in the city’s temperature, an 88 per cent decline in forest cover, water and air pollution, a waste crisis and a proliferation of diseases.

“It is a dead city, which has sacrificed its environment for some of the fastest economic growth seen anywhere in the world,” TV Ramchada, head of the Energy and Wetlands Research Group at the Indian Institute of Science said in an interview with The Guardian last month.

Globally, cities—where two-thirds of the world’s population are expected to live by 2050, up from a third in 1950—are mixed in their ability to create stable, secure, healthy environments for people to live in as they expand. 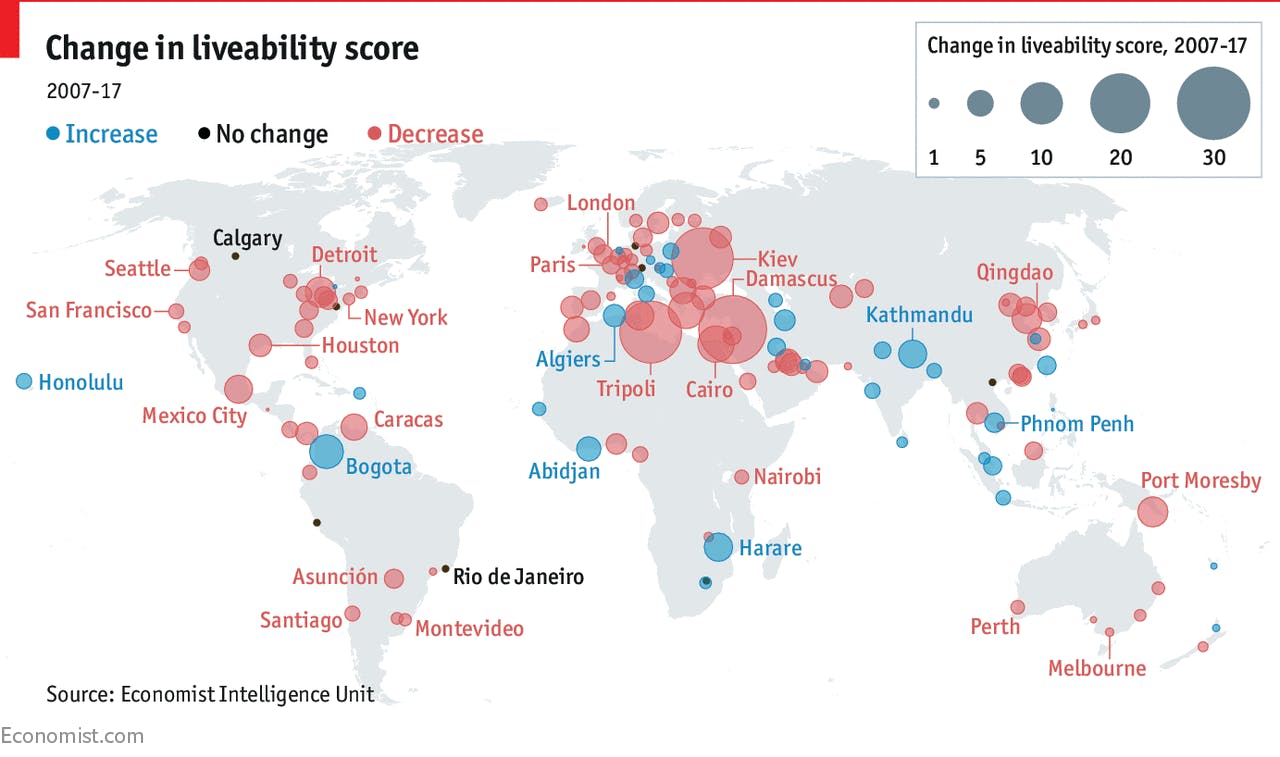 How liveability has changed in the world’s cities over the last decade. Source: The Economist Intelligence Unit

Tan Szue Hann, architect, urban planner and head of sustainability at the industrial consulting firm Surbana Jurong, says: “A liveable city requires good, sustainable infrastructure, architecture and engineering; a stable economy; opportunities to thrive in various fields; and robust policies for sustainable and resilient living. It would also preserve and promote health and wellness for its inhabitants.”

He adds: “Emerging and developing Southeast Asian cities will need to start to look at their infrastructure provisions and availability of resources, as their populations continue to grow.”

With few exceptions, Asia’s swelling metropolises are characterised by worsening traffic, rising levels of air pollution and the proliferation of slums as people migrating from rural areas struggle to find affordable housing. But two problems stand out for Asia’s sweatbox cities—cooling and waste management.

Cooling systems have become a staple of urban living, particularly in warmer climes. Refrigerators are needed to keep food fresh and air-conditioners are needed in workplaces and homes for productivity and comfort. Lee Kuan Yew, the first prime minister of post-independent Singapore, said that air conditioning was the one technology that made development possible in the tropics.

The world uses cooling systems on a massive scale. In a report by the Lawrence Berkeley National Laboratory, it is projected that 700 million more air-conditioners will be installed globally by 2030, and by 2050, that figure will be 1.6 billion.

A research paper produced by Eco-Business in January projected that by 2040, cooling technologies such as refrigeration and air-conditioning could account for 40 per cent of Southeast Asia’s overall electricity demand. As a consequence, a colossal amount of carbon dioxide (CO2) is emitted when fossil fuels are burnt to supply power to air-conditioning, exacerbating the problem of global warming. By 2040, the region’s energy-related CO2 emissions are expected to hit 2.4 gigatonnes per annum.

In an interview with Eco-Business, Soren Kvorning, Asia Pacific president of the multi-national supplier of energy-efficient innovations Danfoss, relates climate change to one of the biggest challenges facing cities today and highlights the potential for cooling systems to be improved.

He says: “Approximately 40 per cent of the energy consumption in cities is consumed in buildings, where there is a massive opportunity for making more energy efficient operations both in existing buildings as well as in the buildings yet to be built.” 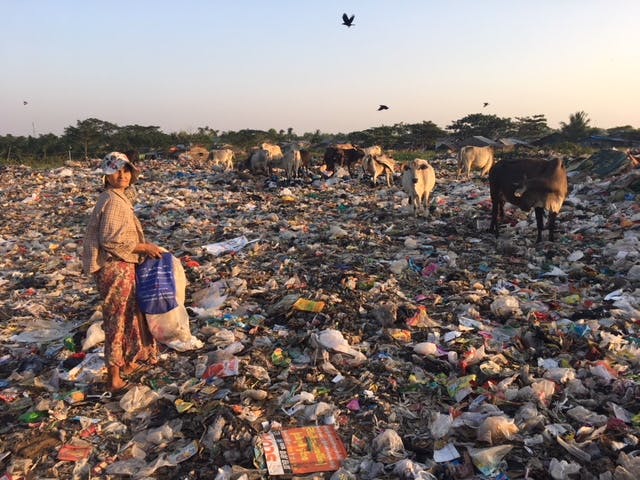 A rubbish dump in Dala, near Yangon, Myanmar. Image: Eco-Business

A major hindrance to sustainable living in Asia is the management of waste as cities grow faster than their ability to manage rising rates of consumption. The most damaging form of waste is plastic, particularly from the packaging of consumer goods.

Five Asian countries account for up to 60 per cent of plastic pollution in the ocean. Eight out of the 10 rivers that account for 95 per cent of the plastic in the ocean are in Asia. It is projected that by 2025, Asia will increase its plastic consumption by 80 per cent.

People need to recycle and businesses [that produce and use plastic] have to be accountable. Through infrastructure and incentives, governments can help ensure that recycling is effectively carried out.

With notable exceptions such as Japan and Korea, recycling has been slow to catch on in many Asian cities and recycling rates remain low. Even in developed Singapore, the recycling rate for plastic is just 7 per cent.

The shift to a circular economy, where resources are kept for as long as possible to maximise their value, after which they recovered and recycled, has been slow, and change is needed to hasten the shift.

Maggie Lee, market transformation manager of World Wide Fund for Nature (WWF)-Singapore, comments: “People need to recycle and businesses [that produce and use plastic] have to be accountable. Through infrastructure and incentives, governments can help ensure that recycling is effectively carried out.”

The need for innovation

One of Asia’s biggest development challenges calls for innovation, which is happening in pockets across the region.

In India, the tar road on Jambulingam Street has earned a reputation for lasting through innumerable rounds of weathering and passing vehicles without developing cracks or other such signs of falling apart. This is because the tar is mixed with shredded plastics, which hold the road together.

New Clark City, Central Luzon, has ambitions to be the Philippines’ first green city that is resistant to climate shock. It is projected to be completed in 25 to 30 years, with the aim of easing the demands of Manila’s swelling population. The first phase of development will consist of building waste management facilities such as a waste recycling and a biomass recovery plant.

The Liveability Challenge is accepting project submissions for solutions to manage waste and keep cities cool in more sustainable ways. Finalists stand a chance to secure up to S$1 million in funding.

The event will culminate in a finale held at Marina Bay Sands, where six finalists will present their solutions to a panel of judges, consisting of some of Singapore’s most renowned investors. A 200-strong audience of venture capitalists, angel investors and experts in waste and cooling will also be present.

Lim Hock Chuan, chief executive of Temasek Foundation Ecosperity, says: “The Liveability Challenge is an opportunity for us to bring together the entire ecosystem of innovators, funders, investors, platform providers and professionals and excite them to find impactful solutions to make Singapore and the region a more liveable place.”

“We hope to give the talents and the innovators a helping hand and help them advance their solutions towards eventual successful commercialisation,” he says.