For almost a decade, this church in Atimonan, Quezon has been waging a war on coal.

For almost a decade, the Our Lady of Angels Parish Church in Atimonan, Quezon has been waging a war on coal.

There has been long history of active opposition led by the Church to coal-fired power plants in the province, dating back to 1995. Despite grassroots organising and cooperation with the academe, mass organisations, and the media, power plants ended up being built in neighbouring Mauban and Pagbilao.

The battle has since reached Atimonan, where residents are facing their biggest challenge yet: a 1,200-megawatt coal-fired power plant.

The coal plant is a project of Atimonan One Energy, Inc, a wholly-owned subsidiary of Meralco PowerGen Corporation (MGEN), the power generation arm of the country’s largest power distributor, Manila Electric Co (Meralco).

Monsignor Noel Villareal still recalls the first public hearing conducted by Atimonan One. The developers said the project would be for a liquefied natural gas (LNG) plant, a proposal that the Church supported. 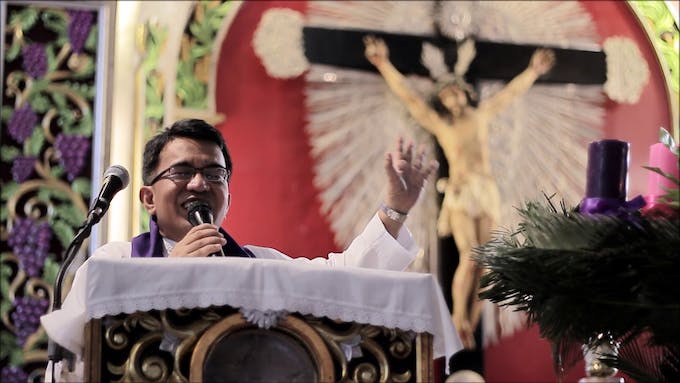 Later, the developers made an about-face: the new power plant would use coal instead.

“They gathered our support for an LNG plant, then they suddenly changed it to a coal plant, [for which] there was no public hearing,” said Ramon Grimaldo, a leader representing the town’s fishermen.

Since then, the issue has galvanised the Church to take the lead in opposing the project.

“It was 2009 when we started to express opposition against the coal-fired power plant in Atimonan. The Church utilised every resource it had to campaign against coal: we talked about it during our homilies in every church in the municipality, we are working with organisations who can echo our campaign,” said.

The facility will be built on an 80-hectare plot of land in Barangay Villa Ibaba, a community facing Lopez Bay, which leads out to the Pacific Ocean.

For fishermen in the community like Ka Ramon, this raises alarms over the environmental degradation that a coal-fired power plant can cause.

According to fishermen from neighbouring towns where coal-fired power plants were built, their fish catch dwindled from 45-50 kilograms to 15-10 kilograms per session over a span of 10 years. It doesn’t help that Ka Ramon’s catch has been declining over the past years as well. 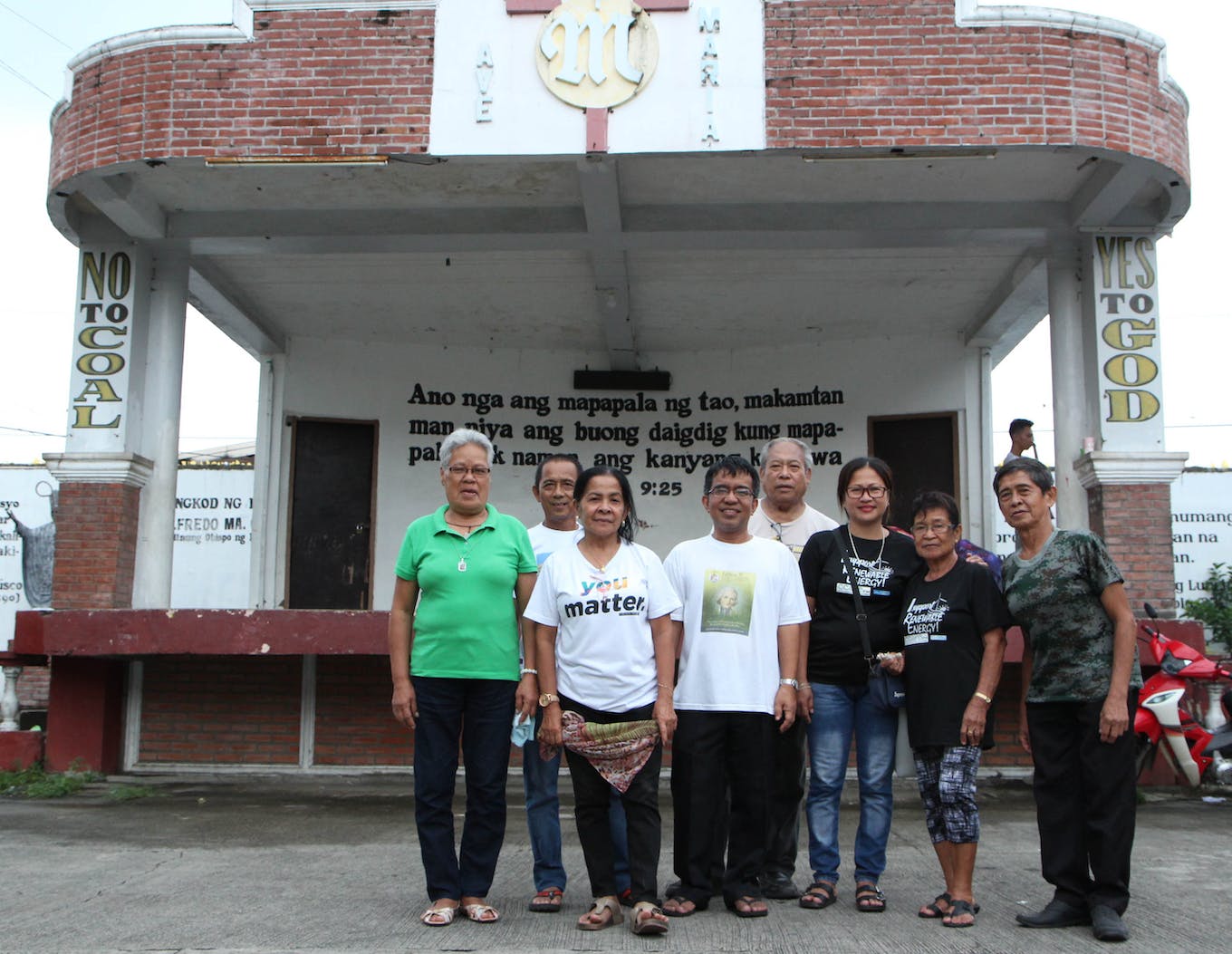 MGEN and Atimonan One Energy say they really did contemplate an LNG project. “But it was changed into a coal plant instead because the company deemed it important to pursue a project that’s faster to develop and has readily available fuel sources,” said MGEN corporate communications officer Claire Feliciano.

“Also at that time, the DOE had yet to issue an LNG framework so there was uncertainty in the sector. The fuel cost for coal is cost-competitive. Gas prices are volatile based on historical data,” she continued. “MGEN is not closing its doors on LNG and may still pursue LNG projects in the future.”

The proposed coal-fired power plant in Atimonan is part of seven new power supply agreements (PSA) entered into by Meralco. A PSA is an agreement between a generation company and a distribution utility for the generation, purchase, and supply of power.

Collectively, these new PSAs will produce 3,551 megawatts of power from coal in the pipeline.

Coal is the most carbon-intensive fossil fuel and accounts for 43 per cent of global greenhouse gas emissions. The Philippines, as one of the countries that ratified the Paris Agreement, has vowed to reduce its emissions by 70 per cent in a Business-As-Usual scenario by 2030.

Experts agree that reducing greenhouse gas emissions is crucial in keeping global temperature well below the 2°C limit set by the Paris agreement.

As such, even a 1.5°C increase in global temperature can lead to more frequent extreme weather events, longer drought spells, sea level rise, disruption of food production cycles, displacement and migration of vulnerable communities, and others.

But MGEN counters that such concerns are “mainly due to old power plants with lower efficiencies and higher emissions.”

“Significant advances in coal-fired power plant technology prove that we do not have to choose between affordable and reliable electricity and a cleaner environment,” said the company.

“The planned power plant of Atimonan One Energy, Inc will use high-efficiency, low-emission (HELE) technology to produce cost-competitive, stable and reliable power supply for electricity consumers.”

Arances, however, warns that failure to shift from coal would leave companies stuck with “stranded assets.”

“Globally, countries are shifting from coal to renewable energy sources; rendering technology utilising coal obsolete. Further, the renewable energy rates are becoming more affordable as the years go by, making these sources more competitive in the market,” he said.

If coal becomes a stranded asset, companies will not be able to profit off of them, making producing electricity from it more expensive than present rates.

Coal-fired power plants have also been linked to serious health risks not only to host communities but to surrounding areas as well. Particulate and sulfur dioxide from coal pollute the air and increase the risk of cardiovascular diseases, asthma attacks, poor maternity health, and others.

One only needs to look at China, where, according to one of the first research studies linking coal to health risks, air pollution is linked to 670,000 premature deaths—mostly from illnesses such as stroke, lung cancer, coronary heart disease, and asthma.

But MGEN said that a coal-fired power plant can bring in benefits for its host community.

“Once the power plant starts operations, it will bring economic benefits by creating jobs, stimulating business growth, promoting infrastructure improvement, among others,” MGEN said in an interview, adding that the company has already implemented Corporate Social Responsibility (CSR) programs that focus on “education, livelihood development, health and sanitation, disaster resiliency and environmental stewardship.”

Besides, MGEN says it “won’t pursue projects that will affect the residents negatively. Note that our employees are also residents and we care for our communities and our employees.”

MGEN also insisted that environmental concerns about the Atimonan project are “given high priority,” citing “a participatory process that involves community-based scoping and consultations to educate the public.”

“At the same time, there are stringent processes in securing environmental compliance certificate based on global standards to ensure that projects like the Atimonan would not pose threat to environment and health of the residents,” the company added.

In 2008, the Philippines enacted the Republic Act of 9513, an act “promoting the development, utilization, and commercialization of renewable energy resources.”

Mylene C. Capongcol, Director for Renewable Energy and Management Bureau of the Department of Energy (DOE), said that the government is working on increasing the country’s renewable energy portfolio.

“Since the enactment of the RE Law, there are about 1, 800 megawatts of renewable energy capacity that have been added to power generation capacities of the country. Aside from this, the DOE continues to receive applications for Renewable Energy Service Contracts (RESCs) for RE development.  As of now, more than 1000 RESCs that have been awarded,” she explained.

Ten years since the enactment Renewable Energy Act, the current Philippine energy mix is still dominated by coal at 47.5 per cent, followed by natural gas at 21.9 per cent and geothermal at 12.2 per cent.

In fact, a study by Institute for Energy Economics and Financial Analysis and Institute for Climate and Sustainable Cities (iCSC) showed that the country has 10,423 megawatts of coal-fired power plants in the pipeline.

The Philippines has one of the highest electricity rates in Southeast Asia; focusing on renewables could help keep costs down. In a study, iCSC found out that the country can save up to P10 billion per year if renewable energy is made available to small islands instead of importing diesel for power generation.

China, the world’s biggest emitter of greenhouse gases, currently produces 30 per cent of the world’s wind power, 25 per cent of global solar capacity, and houses six of the top ten manufacturers of solar panels.

Solar energy firm Solar Philippines has offered to produce 24/7 power for Meralco at P2.99 per kilowatt-hour — which, the company said in a statement, could save consumers up to P75 million per year. 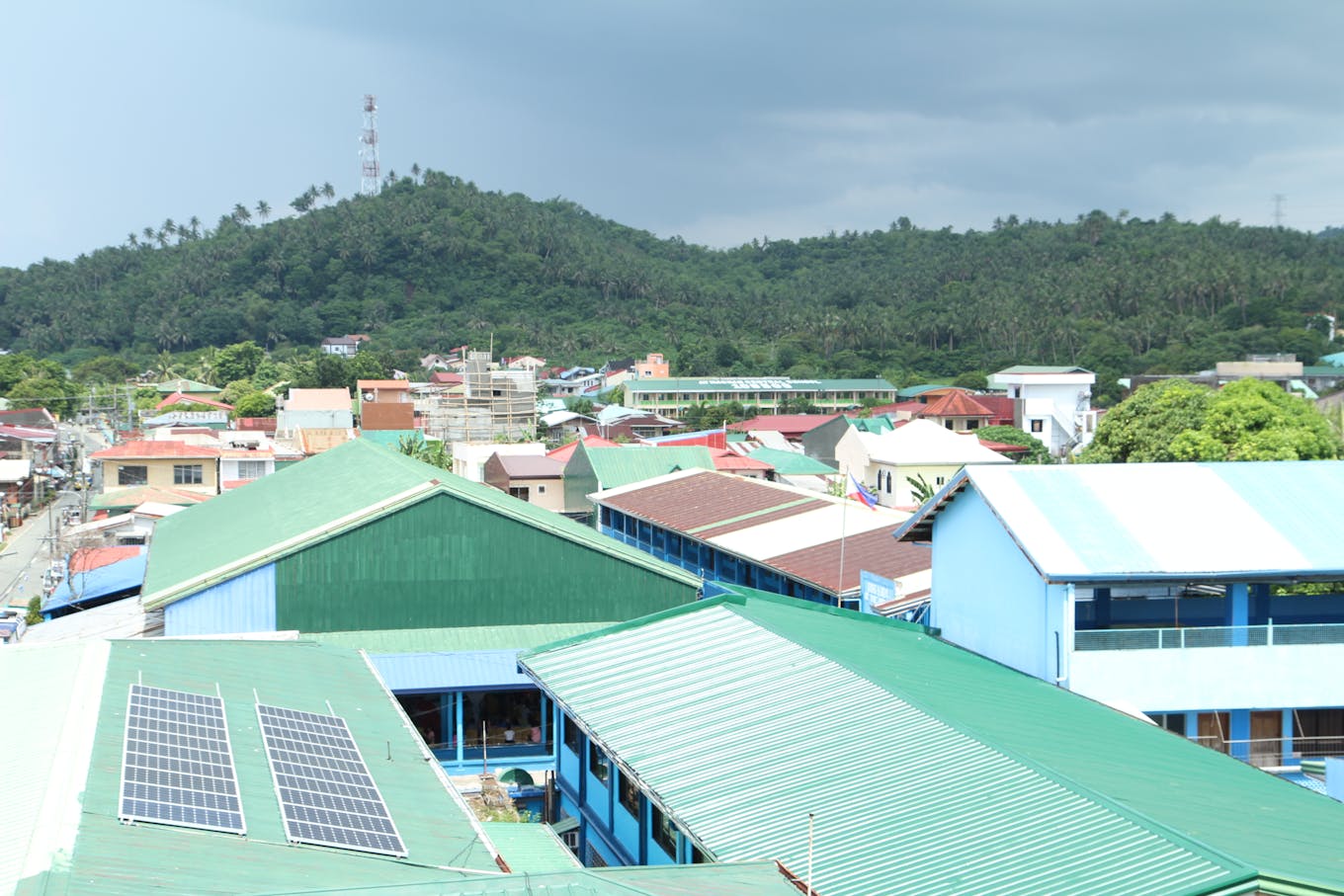 The solar facility installed on top of the Our Lady of Angels Church supplies electricity to the Church and its periphery, including the Convent and the street lights inside the Church complex.Image: GMA News Online

The solarised Church and its moral obligation

To signify its commitment to clean energy, Our Lady of Angels Parish installed a five-kilowatt grid-tied solar energy system on the roof of the church.

“It is a small step but we want to show the people that clean energy is possible,” Villareal said.

Solar energy supplies power to the church, the convent, and the street lights within the church’s complex.

Villareal said that the Church will not waver from opposing coal and is using all of its resources to get their message across.

“The town was established by Franciscan priests in 1937 and we keep an oath to protect the Nature and the poor. We believe that any technology or development that harms the environment should be replaced with better alternatives—in this case, renewable energy,” he explained.

He expressed alarm over the recent killings of priests, but he said that he is not afraid.

“Being a priest comes with a lot of risks; everyone knows that. But I believe, as the late President Corazon Aquino said: ‘It is better to die a meaningful death than to live a meaningless life.’”

This story was first published on GMA News Online and was republished with permission.