How a Finnish engineering firm is greening the shipping industry

As the maritime sector grapples with scary emissions, one firm is rolling out technology designed to reduce energy consumption and pollution. In this interview with Eco-Business, Wärtsilä CEO Jaakko Eskola talks about how his firm is driving sustainability through a sector responsible for 2 per cent of greenhouse gas emissions.

The unusual aspect: one of Wärtsilä’s core businesses is the maritime sector, a notoriously conservative industry that produces as much greenhouse gas emissions as some developed countries annually, while sustainability is low on the list for many of the company’s customers.

But change has to start somewhere, says Wärtsilä chief executive Jaakko Eskola, speaking to Eco-Business on a stop in Singapore. And for a 185 year-old company like Wärtsilä, which has reinvented itself a dozen times over the last two centuries, changing to incorporate sustainability in its business model is a natural step. 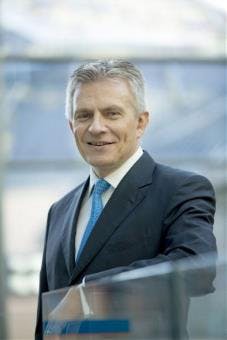 “The market is changing. Customers are changing. Our own people are changing. We have to change ourselves too, and we chose to pivot towards sustainability,” he says.

Companies serious about sustainability can effect change in many ways, he explains. They can work through their national industry bodies or professional associations; they can leverage the influence they hold simply by operating internationally and having a presence in many countries.

They can reach out to regulators such as the International Maritime Organization (IMO), which is responsible for setting standards on the environmental performance of international shipping. And—as Wärtsilä has done—they can provide the means for other companies to be sustainable.

Sustainability isn’t a priority for companies that are concentrating on ways to survive.

“We create the technologies, so we enable the sustainable issue to be on the agenda,” Eskola says. “Nobody can use the excuse ‘we would like to do that but there is no technology’. There is the technology. You just have to use it.”

Efficiency as the launch point

A glance through Wärtsilä’s product lines reveals any number of technologies designed to reduce fuel consumption and emissions, and enable a switch to cleaner fuels at minimal cost. It is a tremendous jump from 2000, when clean technology wasn’t even on the map, Eskola remarks.

“I joined Wärtsilä in 1998, and I don’t think anybody was talking about sustainable products at that time,” he says. “But it has slowly come into the picture. One issue which has always pushed it along has been efficiency. When you improve efficiency, you improve everything immediately.”

That, he points out, is a major selling point in an industry suffering from massive overcapacity and painfully tight margins. Unprofitability and reluctance to take on additional costs is, after all, one of the underlying reasons why shipping lags behind so many other sectors in cleaning up its act.

“Sustainability isn’t a priority for companies that are concentrating on ways to survive,” Eskola says. “But at the same time, when you have an industry which hasn’t been working on sustainability for a long time, you can find very easy low-hanging fruit.”

The entry point is engine efficiency, he explains. When an engine is more efficient, the economics of its use improve immediately – it consumes less fuel and produces less emissions, not only carbon dioxide but toxic sulphur oxides (SOx) and nitrogen (NOx) oxides. And once the engine is upgraded, it becomes possible to introduce more improvements, not just to individual components of the ship but to its entire design and operation.

There has to be something more to a company than just making money or products. You have to look at what you’re doing for society.

The solution, Eskola says, is to bring in smart technologies, designed specifically for the sector, that make such planning and optimisation possible. He has been building his firm’s capacity to do exactly that. Over the last two years, Wärtsilä has invested considerable resources in upping its software game. The company has made multiple acquisitions in the software industry, and Eskola even hired a chief digital officer with the mandate of educating Wärtsilä’s 19,000-strong workforce about the company’s digital strategy.

“I am now sure that all 19,000 people at least understand what digital transformation, artificial intelligence, and blockchain are, and so on. Whether we use it everywhere, whether we earn money from it or not, I’m extremely happy to see how people in the company talk about it and how it has been taken into account in all decision-making and when dealing with our customers,” he says.

Bringing customers and industry partners on board

In a price sensitive industry, one key to convincing customers to invest in cleaner equipment can be its life cycle: how long a given piece of equipment will last, and how much its operation and maintenance will cost during that time.

“Everybody wants an understanding of the service level; that somebody will be present through the life cycle to handle any problems that arise. They want an understanding of the cost of ownership,” Eskola says. “There are segments of the market where the initial price is the first element, but we have been able to convince most of our customers to look at the life cycle.”

The life cycle can be remarkably long, he adds—Wärtsilä is still servicing some engines which were built in the 1920s.

Some sectors, such as the cruise and ferry industries, are also taking sustainability more seriously, he says. Large players tend to be among the companies that emphasise it, which is a positive development as they have greater clout. “It’s difficult. It takes time, it needs education. But you can find friends who support what you are trying to do.”

He is less optimistic about regulators’ ability to support industry sustainability, citing the IMO’s delays on implementing a number of environmental standards such as the reduction of emissions for certain classes of ships, or the treatment of ballast water to remove pollutants before they’re released into the ocean.

Companies pursuing sustainability-focused innovation may also find themselves worrying about one more group of stakeholders: shareholders. Wärtsilä is listed on Nasdaq Helsinki, and while shareholders in Finland, a country where nature is close to the lives and hearts of much of the population, may be more forgiving of sustainability-oriented business moves, there still has to be a sound business case.

“It’s a difficult question,” Eskola admits. “When you spend money on innovating new technology which doesn’t make money, and at the same time you are a stock-listed company where everybody is looking at your profitability and your share price, you need to somehow balance that. You need to be innovative, but you also need to be profitable, and you need to grow.”

That said, he adds, the reason for pursuing an environmentally sound strategy need not just hinge on sales and profits. “There has to be something more to a company than just making money or products,” he says. “You have to look at what you’re doing for society.”