Half of Singaporeans want sustainable brands

More than half of Singapore consumers believe that business supply chains should not be harming the environment, but less than half of business owners and executives agreed. Do brand ethics matter?

More than 50 per cent of Singapore consumers and half of all shoppers in the Asia Pacific region believe that companies should ensure that their supply chains do no harm to the environment.

These were among the findings of a new survey published last week by market research firm YouGov, which polled 9,000 people across the region. The study asked if respondents believed the private sector has a responsibility to do social good, and in what form.

Consumers from the Philippines and Australia felt more strongly about the role of business in safeguarding the environment, with 63 per cent and 58 per cent respectively saying it was up to companies to ensure their supply chains do not harm the environment. Singapore followed in third place with 56 per cent, while Indonesia and Thailand were the last of the nine markets surveyed.

Jen Teo, executive director of non-profit group Singapore Environment Council, told Eco-Business that the figures were consistent with what she had seen in other studies, particularly that millennials are the most willing to spend more on sustainable goods.

“The results show that consumers are environmentally aware and want to know that the products they purchase have been manufactured sustainably,” she said. “Companies that embrace sustainable and ethical practices will do better in the long run as more Singaporeans choose their products and services over those of their competitors.”

However, the survey results showed that the business sector lacks the conscientiousness of consumers, with only 46 per cent of business owners and senior management executives agreeing that they were responsible for ensuring the sustainability of their supply chains.

Calling this figure low, Singapore-based senior sustainability consultant for Corporate Citizenship, Thomas Milburn, said companies tend to lack visibility over their supply chains, and the price and quality of their supplies were bigger concerns.

“But as the expectations of consumers and other stakeholders such an investors change, businesses will be forced to pay more attention to their supply chains,” he said. “In addition, we are increasingly seeing companies experience costly supply disruptions caused by unsustainable practices.”

The results of the study were a “pleasant surprise” for UN Global Compact Network Singapore’s Wilson Ang, who pointed out that the 46 per cent figure for businesses did not lag the percentage for consumers by much. “This finding is in line with GCNS’s experience of a growing number of businesses stepping forward to seek support for how they can improve the sustainability of their business processes.”

In a clear example of growing consumer awareness of supply chain sustainability issues, the World Wide Fund for Nature (WWF) last year published a report on the use of unsustainable palm oil among Singapore and Malaysian brands, which sparked a backlash from consumers.

Popular local brand Old Chang Kee was one company named in the WWF report and faced consumer pressure over its lack of transparency around palm oil use. Song Yeow Chung, the company’s group financial controller, told Eco-Business that Old Chang Kee is currently vetting their oil suppliers to ensure that the cooking oil provided can meet health standards by the Health Promotion Board and are certified sustainable by the Roundtable on Sustainable Palm Oil.

Saying Old Chang Kee has a strict qualification process for its suppliers, Song added: “Should we be aware of major deficiencies in food safety, halal non-compliance or environmental violations, we will not hesitate to exclude these suppliers from future business dealings.”

One business that is aware of the environmental impacts of its supply chain is Kimberly-Clark, the world’s biggest buyer of market pulp.

Anuj Sinha, the company’s general manager for Malaysia, Singapore, Indonesia and the Philippines, said Kimberly-Clark adopts Forest Stewardship Council (FSC) standards and encourages its suppliers to get FSC-certified. From 5 per cent in 2007, the manufacturing giant now purchases about 75 per cent of FSC-certified pulp to meet its needs.

“If the government, which is often the largest purchaser of goods and services in a country, signals its expectations and commitment to sustainability, industry will generally follow their lead,” said Sinha. He cited the Singapore Enhanced Green Label for consumer products and the Green Mark for buildings in Singapore as examples of how governments can have an impact on business supply chains. 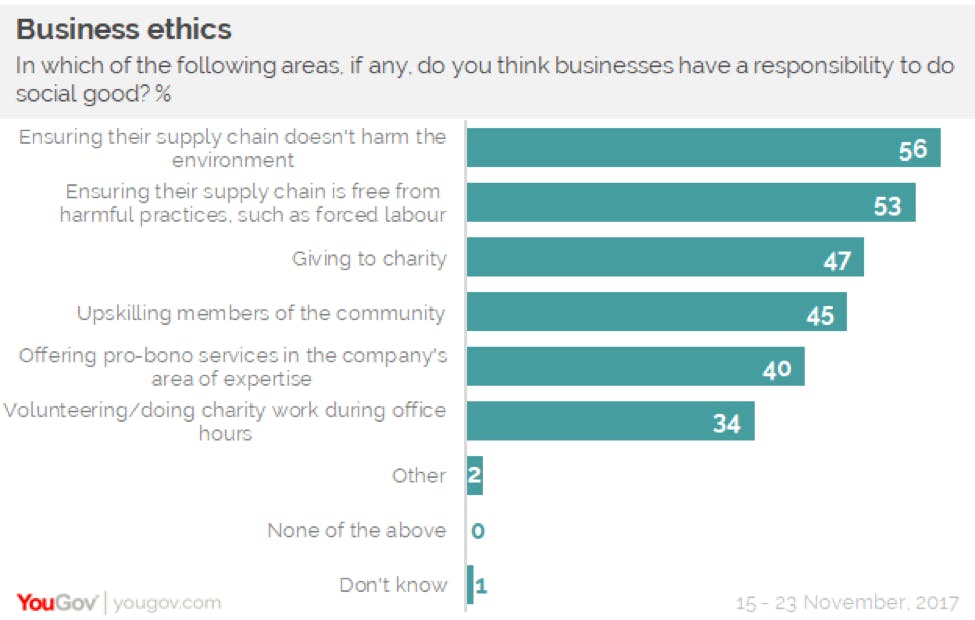 Singapore respondents expressed a preference for responsible companies those that ensure their supply chains do not harm the environment and are free from negative practices such as forced labour (53 per cent)—over typical corporate social responsibility (CSR) activities such as volunteer programmes or offering pro bono services.

Companies that donated to charity were also more likely to be well-regarded by APAC consumers, 62 per cent of whom said they were more likely to recommend such a brand to friends and family.

The number is especially high in Indonesia (75 per cent) and Thailand (70 per cent), but less so in Singapore, Australia and Hong Kong, where the figure hovers around the 50 per cent mark.

Said GCNS’s Ang: “The study is a pleasant note of encouragement that shows that brand ethics do matter.”

“There is a considerable proportion of consumers who are willing to vote with their dollars and even influence their peers to do the same, a trend that is set to continue.”