Billed as a more environmentally friendly way to rear cattle, grass-fed beef has been the red meat of choice for many a climate-conscious carnivore.

Indeed, research has suggested that grazing cattle can help offset global warming by stimulating soil to take up more carbon from the atmosphere. This process, known as soil carbon sequestration, is one way of reducing the amount of human-induced greenhouse gases in the atmosphere.

However, a report released today by the Food Climate Research Network at the University of Oxford finds that cattle fed on grass release more greenhouse gas emissions than they are able to offset through soil carbon sequestration.

This means that grass-fed beef is “in no way a climate solution”, says the lead author of the report.

Animals help with [carbon sequestration] by nibbling away and chomping away, which stimulates the plants to grow. That can cause the plants to put down deep roots.

Overall, the livestock industry is responsible for around 15% of global human-caused greenhouse gas emissions. Approximately 80% of these emissions come directly from ruminant animals, such as cattle.

The majority of the world’s cattle are “grain-fed”. In most cases, this means that the animals begin life grazing in the field, before being transferred indoors to be fed on grains, such as corn and soy.

However, a growing number of livestock producers are choosing to feed their cattle on a diet purely of grass. These “grass-fed” animals spend the majority of their days grazing outside.

Though both types of cattle contribute to global greenhouse gas emissions, it has previously been suggested that grass-fed cows could have a lower carbon footprint.

This could be because grazing cattle can stimulate plant growth, which in turn leads to higher levels of soil carbon sequestration, says Dr Tara Garnett, lead author of the new report. She told a press conference this week:

“Animals help with [carbon sequestration] by nibbling away and chomping away, which stimulates the plants to grow. That can cause the plants to put down deep roots.”

This process means that more organic carbon could become fixed in the soil, Garnett says.

To understand the impact of grazed cattle, researchers from the Food Climate Research Network spent two years analysing the available scientific research on grass-fed livestock sector emissions, as well as its potential impacts on carbon sequestration.

The chart below shows how different animals and crop contribute to the average daily protein intake. 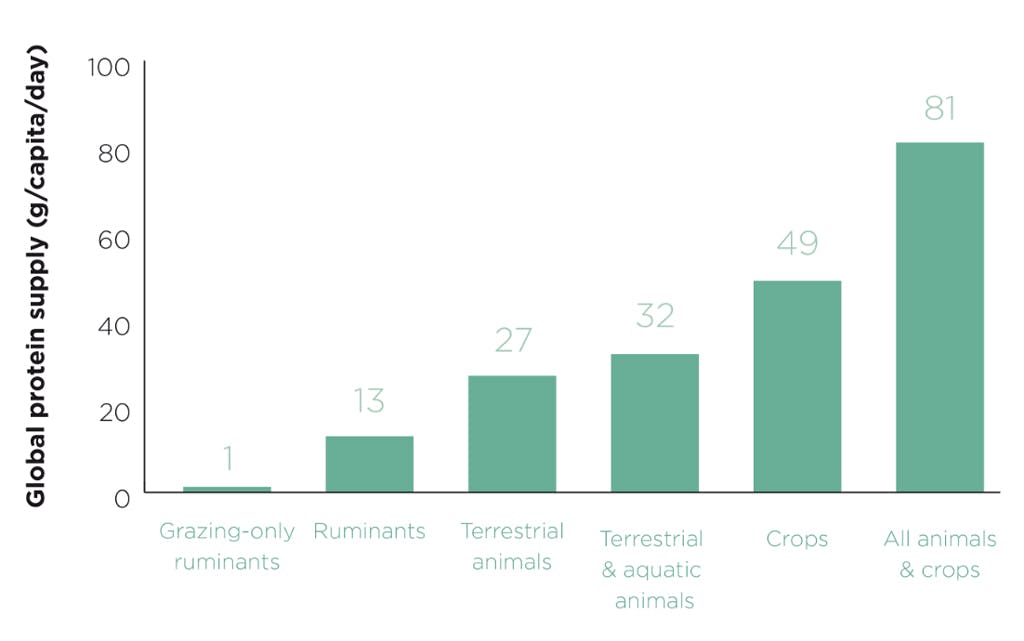 Despite making only a marginal contribution to global protein intake, grazed beef accounts for between a quarter and a third of all greenhouse emissions from ruminant livestock, says Garnett:

“It’s worth comparing [emissions to protein intake] because grazed beef have reasonably significant emissions when compared to the amount of protein that they provide.”

However, this estimate assumes that the environmental conditions are right for soil carbon sequestration to take place, Garnett adds:

“It’s an optimistic estimate. The climate and the rainfall conditions needs to be right [for soil carbon sequestration to take place]. If you overgraze the grassland, then you will get an annual loss of carbon from the soil.”

Despite the potential impacts of soil carbon sequestration, grass-fed beef is, overall, a net contributor to carbon emissions and, therefore, a driver of human-caused global warming. Garnett says:

“This report concludes that grass-fed livestock are not a climate solution. Grazing livestock are net contributors to the climate problem, as are all livestock. Rising animal production and consumption, whatever the farming system and animal type, is causing damaging greenhouse gas release and contributing to changes in land use.”

The research suggests that the best way to tackle livestock emissions is to cut global levels of meat consumption, says Garnett.

“Ultimately, if high-consuming individuals and countries want to do something positive for the climate, maintaining their current consumption levels but simply switching to grass-fed beef is not a solution. Eating less meat, of all types, is.”