Golden Agri-Resources and APRIL, two Singapore-based firms implicated in last year’s worst haze crisis, have been accused of falling short of their commitments to sustainability practices in Indonesia

In two separate announcements this week, Singapore-based Golden Agri-Resources and Asia Pacific Resources International Limited or APRIL were called out for unsustainable practices in Indonesia, almost six months after both companies were implicated in the most severe haze incident in the region.

The Forest Peoples Programme, an environmental NGO based in the United Kingdom, accused PT SMART, a palm oil subsidiary of the Singapore-listed Golden Agri-Resources group, of abusing the rights of the local community in a newly released report on Friday.

The 62-page document, called the “Independent Review of the Social Impacts of Golden Agri Resources’ Forest Conservation Policy in Kapuas Hulu District, West Kalimantan”, details how the land of indigenous peoples were grabbed unjustly and then set aside as ‘carbon stores’, further limiting the communities’ right of use and livelihood. The firm has since issued a statement thanking FPP for their findings, calling on the organisation to continue collaborating with them to prepare an action plan.

Separately, the World Business Council for Sustainable Development (WBCSD) has put Singapore-based paper and pulp company APRIL on probation for one year starting this month due to its deforestation practices.

The organisation of CEOs dedicated to sustainability and corporate social responsibility also has a Forest Solutions Group (FSG), which APRIL is now suspended from, until it can comply with its forest management and fibre procurement guidelines. Should the firm fail to stop clearing rainforests in Indonesia and using a majority of rainforest wood for its fibre supply, they will not regain admission into the FSG and their WBCSD membership will be reviewed.

Golden Agri and lack of consent

Both APRIL and Golden-Agri – members of the industry association Roundtable on Sustainable Palm Oil – were included in the eight firms previously named in the aftermath of the haze crisis in Singapore and Malaysia last June. These companies were blamed for burning forests and peatlands in Riau, Indonesia, which caused the transboundary air pollution.

The aims of the RSPO standard and GAR’s new Forest Conservation Policy may be well-intentioned but they need to be observed in practice, not just on paper

Prior to that, Golden-Agri had already been under the scrutiny of environmental groups for unsustainable business practices linked to deforestation.

The firm had responded by developing its own forest conservation policy in 2011 (an outlined policy that became a more detailed methodology in 2012), which states that they will no longer “clear any more forests or areas of peat”. The policy, formed in collaboration with Greenpeace and The Forest Trust, also outlined their commitment to “develop a new policy by which they could zone their concessions for areas of High Carbon Stocks (HCS) and then exclude them from future clearance”, said the report.

The problem with this move, is that they have set aside land belonging to the Dayak and Malay communities for their pilot site, FPP pointed out.

They alleged that one of PT SMART’s eight oil palm concessions in West and Central Kalimantan, PT Kartika Prima Cipta (PT KPC), grabbed lands from indigenous peoples and local fisher folk without their ‘free, prior and informed consent’. This land is supposedly set aside for ‘carbon stores’ or areas to be protected from clearances to ensure that carbon is not released into the atmosphere.

Norman Jiwan, director of the Indonesian ecological justice NGO TUK-Indonesia and a Dayak himself, said: “Our field studies show that PT KPC got communities to surrender their lands without due process … Yet the farmers can’t easily appeal the unfair land-grabs as none have a copy of the contract under which their lands were taken.”

This goes against the principles and criteria of the RSPO, and it also shows how the social implications of the Forest Conservation Policy were not adequately accounted for, explained FPP. 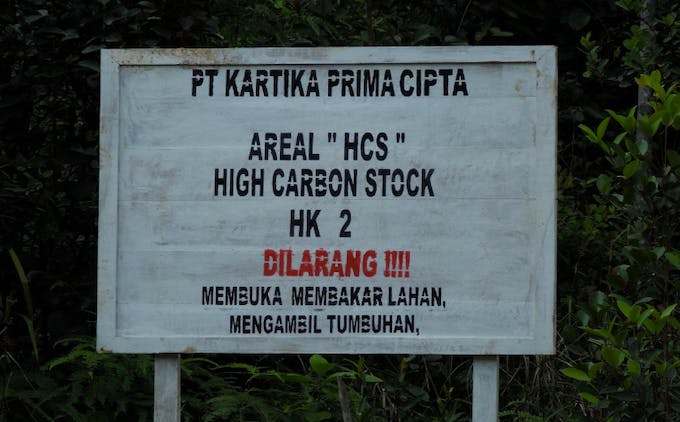 A sign in the forest saying it is forbidden to burn land and collect plants. Image: Marcus Colchester / FPP

According to the report, the land-use zoning exposes communities to a “double whammy”, in which the High Carbon Stock areas restrict locals from cultivating the land while it directs companies to areas outside of the zone that have already been established as farms by the people, as such “their livelihoods might thus come under double pressure”.

“The aims of the RSPO standard and GAR’s new Forest Conservation Policy may be well-intentioned but they need to be observed in practice, not just on paper,” said Marcus Colchester, FPP senior policy advisor.

“Unfortunately, in this case, lands were taken unfairly and now the company is seeking to impose ‘High Carbon Stock’ set-asides which will further restrict rights and livelihoods. We alerted the company to these problems in July last year and made clear recommendations about what had to be done to correct these failings, but the company has been extremely slow to act,” he added.

Golden-Agri, however, welcomed these allegations. They said, “We thank FPP for their additional findings which have assisted our own full field audit of PT KPC, conducted in partnership with The Forest Trust.”

They explained that aside from the FCP they also have the Social and Community Engagement Policy (SCEP), which ensures their palm oil operations have a positive impact on the community.

“This process includes consent for the proposed HCS forest conservation areas and negotiating co-management of them with the local community, settling any compensatory payment, and arrangements with the relevant legal frameworks and authorities to secure the conservation status of the HCS forest areas,” the company said in a statement sent to Eco-Business.

They emphasised “that no one is forced to sell their land”. “Where there are conflicts, we are committed to actively promote and support responsible and peaceful resolution,” said the firm.

Currently, they also have a participatory mapping exercise involving the local communities that helps define the boundaries of High Carbon Stock areas, as well as other micro-land uses. The results are expected to be released this March, noted Golden-Agri.

Given APRIL’s recent heavy dependence on rainforest fibre, Greenpeace has serious concerns about APRIL’s commitment to a zero deforestation policy and any ambition it may have to become 100 per cent reliant on plantation fibre

Colchester warned, though, that other companies planning to implement HCS set-asides, like Unilever, should learn from Golden-Agri’s mistakes. Transparency, especially about the terms of the land deals, is tantamount, he noted.

“They must start by respecting communities’ land rights, securing their livelihoods and making clear from the start which areas they plan to take over for both plantations and conservation,” he added.

APRIL: Clean up or get out

Greenpeace, which has been communication with the business sustainability coalition against the firm since February 2013, confirmed the announcement with its own statement issued on the same day.

APRIL is now considered on probation for one year starting this month, while its membership with the FSG is suspended. Only when it fulfils the FSG’s principles, complete with a third party verification of its operations and performance, will it regain admission into the FSG. Should the company fail to do so, its WBCSD membership will be put on review, noted the advisory.

According to the coalition, the primary concerns lodged by NGOs and peer companies of the FSG were on the scale and duration of APRIL’s forest conversion, as well as the significant amount of hard wood fibre in its pulp and paper production.

Still, the WBCSD has been helping the firm develop a sustainability roadmap since May last year, indicating that it should fully implement this plan to secure its membership. It also requested that APRIL consider transferring its membership to its parent company, RGE. This way, RGE and all its business units will commit to sustainable forest practices.

Phil Aikman, Greenpeace senior campaigner, admitted, however, that their eco-group is hard-pressed to believe that APRIL will become fully sustainable. In addition to the firm’s history of unfulfilled no-deforestation commitments, he added: “Given APRIL’s recent heavy dependence on rainforest fibre, Greenpeace has serious concerns about APRIL’s commitment to a zero deforestation policy and any ambition it may have to become 100 per cent reliant on plantation fibre.”

The company is Indonesia’s leading driver of deforestation due to pulp, the NGO noted. “Confidential data indicate that in 2012 APRIL suppliers planned to clear some 60,000 hectares of rainforest, which is equivalent to 230 football pitches a day,” they stressed.

Greenpeace plans to keep on monitoring the firm and the rest of RGE. He said, “When an organisation led by CEOs of some of the world’s biggest corporations threatens to kick it out of the club, then you would think APRIL would listen.”

“Greenpeace will continue to expose APRIL and RGE’s role in forest destruction and cut through the game of smoke and mirrors the company is playing with its customers,” Aikman added.

“It’s time for APRIL to take this threat seriously and finally implement an immediate moratorium on all further forest clearance,” he said.