Among 300 firms, there are 44 different job titles for the same sustainability head function. According to the study by Dow Jones, the corporate world's approach to sustainability is muddled and clear reporting lines are lacking.

A study of businesses has found that although environmental, social and governance (ESG) issues have shot up the corporate agenda in recent years, companies have taken a muddled approach to organising their sustainability function.

The global survey of 300 companies, conducted by WSJ Pro, a premium content subscription service run by publisher Dow Jones, assessed the readiness of corporations to tackle sustainability issues. Across 300 firms globally, it identified as many as 44 different job titles for the same executive role in charge of the companies’ sustainability function.

The study found that large, publicly-listed companies are more likely to have dedicated professionals leading and working on sustainability, and are four times more likely than smaller firms to have grown sustainability headcount over the past year.

Smaller businesses with less than $10 million in annual revenue tend to rely on the chief executive for sustainability-related duties, and it leads to sustainability only getting “a fraction of the leader’s attention”, said the report’s authors. Sustainability is unlikely then to be a priority for the firm, they concluded. 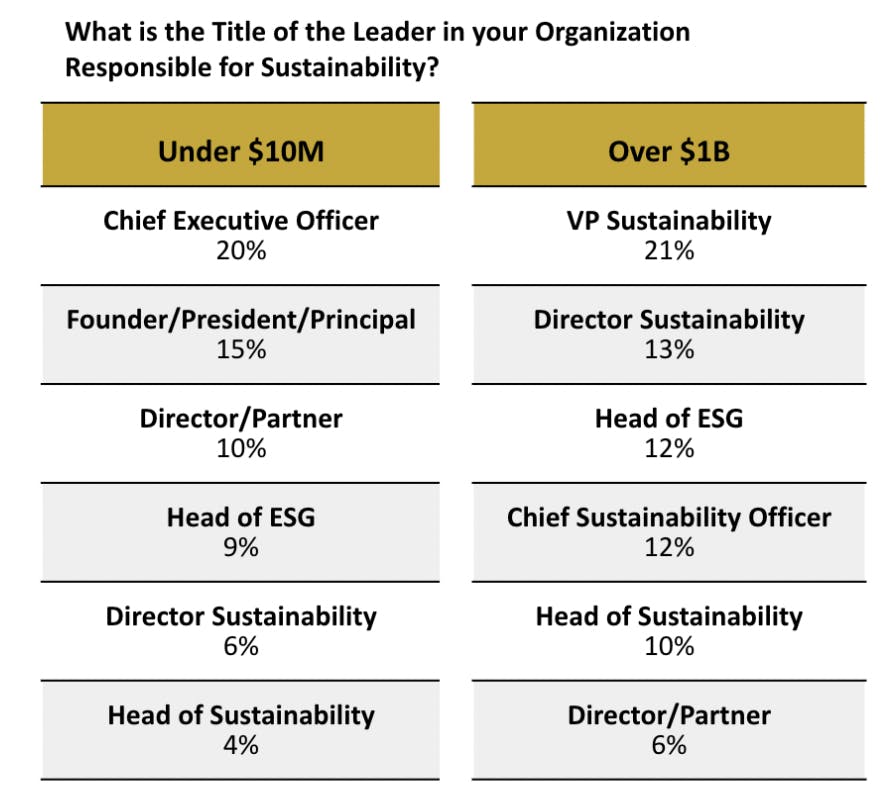 Who’s in charge of sustainability in your company? Job titles in big (more than US$1 billion in revenue) and small companies (less than US$10 million) compared. Source: WSJ Pro Sustainable Business Survey

Several firms, particularly smaller businesses, have no individual running sustainability, rather it is owned by a group of executives, the human resources function, or by a steering committee.

The report found that appointing chief sustainability officers (CSOs) is still uncommon for companies. Only 7 per cent of firms have their sustainability function led by a CSO, with higher representation among larger firms (12 per cent) and publicly-owned companies (13 per cent).

The CSO role is particularly new in Asia, with numerous firms hiring one for the first time over the past year. These include the Monetary Authority of Singapore (MAS), which hired sustainability expert Darian McBain, conglomerate Keppel Corp which installed Ho Tong Yen, United Overseas Bank (UOB) and its appointment of Eric Lim, and media firm MediaCorp, which appointed its editor-in-chief as CSO.

How close to Caesar are sustainability leaders?

The closer the sustainability leader sits to the CEO, the greater their power. But there are no consistent reporting lines for corporate sustainability executives, the survey revealed.

In bigger companies, the CEO is the most likely executive for sustainability leaders to report to (38 per cent), followed by the chief operating officer (8 per cent), chief financial officer (6 per cent), general counsel (6 per cent) and board (6 per cent).

CSOs are the most likely to report directly to the CEO (64 per cent), followed by VP of sustainability (46 per cent) and head of ESG (38 per cent).

Sustainability leaders that report to the marketing or communications department have raised concerns of greenwashing — a brand making exaggerated or false green claims — because their work is more likely to be aligned with company messaging and spin.

The survey found 28 per cent of all companies had no full-time dedicated sustainability personnel, a proportion that was higher in small businesses (37 per cent) than larger companies (18 per cent).

A talent shortage is an issue for many firms, with about 30 per cent of companies saying they lacked sufficient sustainability people.

The perceived talent shortfall is higher (41 per cent) among larger firms than smaller businesses (19 per cent), probably because there is less demand for sustainability programmes in small firms, the report said. 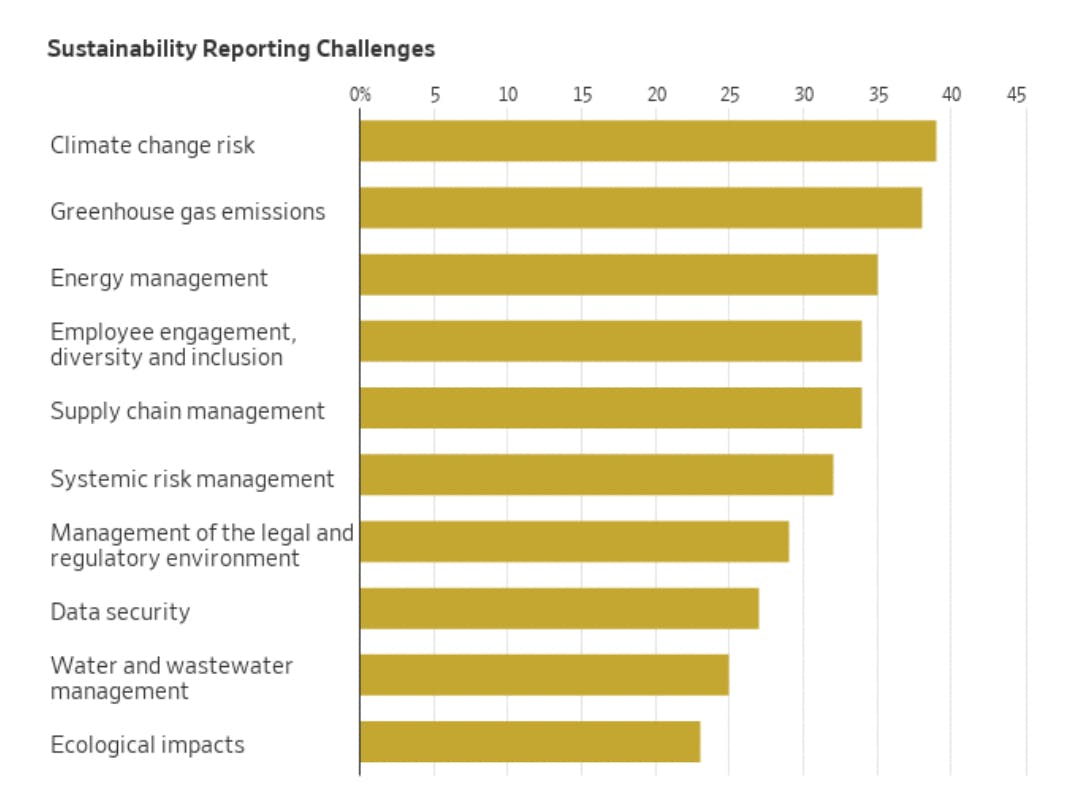 Which ESG issues are the most difficult to report on? [click to enlarge] Source: WSJ Pro Sustainable Business Survey.

One third of private firms have no dedicated sustainability headcount, making it less likely any meaningful sustainability efforts have been undertaken.

More than a third (39 per cent) of companies reported lacking certain skills in their sustainability teams, and 23 per cent said recruiting people with specific sustainability skills is a challenge.

Just under half (44 per cent) of companies said they are not currently reporting their sustainability performance, and one in five said they had no plans to start reporting.

Six in 10 smaller companies are not reporting the results of their sustainability programs, which could complicate efforts by larger companies to track and reduce Scope 3 emissions within their value chains, the report suggested.

Companies said that environmental harm reduction issues, including climate risk and greenhouse gas emissions, were the most difficult to report on, although larger companies said diversity and inclusion was the trickiest issue to account for.