Gasp! Air pollution in Jakarta and Hanoi is now worse than in Beijing, global study reveals

While air quality in China improves, Southeast Asia's air is becoming less breathable as a result of urbanisation, coal burning and forest fires. Nowhere is the air as suffocating as South Asia, but there are signs of improvement in India and Pakistan, as policymakers start to respond to the world's single biggest public health threat.

While the air in China—the world’s biggest carbon emitter and polluter—is fast getting cleaner, Southeast Asia’s air is becoming markedly less breathable for the regional bloc of 655 million people, an annual study of air pollution dominated by Asia’s rapidly developing economies has revealed.

The air in the Indonesian and Vietnamese capitals is now 20 per cent more polluted than China’s capital city, which has introduced radical policies to improve air quality in recent years.

Jakarta now ranks as the world’s fifth-most polluted city and Hanoi is seventh. Beijing has dropped to ninth, according to measurements of particulate matter known as PM2.5, particles small enough to penetrate deep into the lungs. 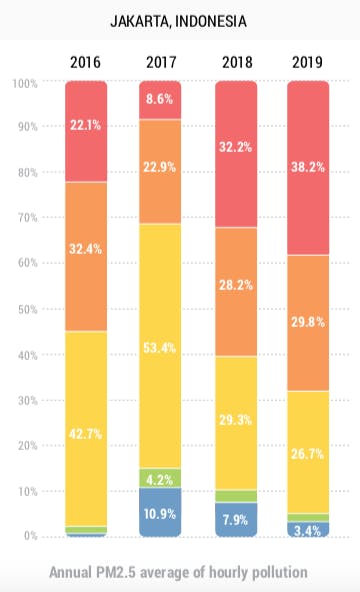 Jakarta’s worsening air quality, 2016-2019. The red band indicates “unhealthy” air, the blue is safe to breathe, according to WHO standards. Source: IQAir AirVisual

Seasonal peatland forest fires to open up land to grow commodities such as pulp and paper, rubber and palm oil, household waste burning, and a reliance on coal for energy blighted Indonesia’s air last year, while rapid development coupled with weak emission standards for power plants have made Vietnam’s skies increasingly murky, the report found.

Air pollution worsened in every country in Southeast Asia between 2018 and 2019—with the exception of Thailand, where an increase in the number of air quality monitors has helped to raise public awareness of the issue.

Thailand still experienced periods of dangerously bad air in 2019; in January last year, hundreds of schools were closed due to heavy smog in Bangkok, and March and April saw intense air pollution in the rural north of the country, mainly due to open burning by farmers.

Even in Singapore, a country that prides itself on its relatively Alpine air for much of the year (when forests aren’t burning in neighbouring Indonesia), air quality has dropped for three consecutive years. In 2019, the city-state’s average air quality was almost twice above the PM2.5 level considered safe to breathe by the World Health Organisation (WHO).

Singapore’s air was 36 per cent dirtier than Manila’s in 2019. The Philippine capital, is notorious for choking traffic along arterial road EDSA, has Southeast Asia’s cleanest air—but Manila’s air is still above WHO’s safe limit, according to IQAir AirVisual data. 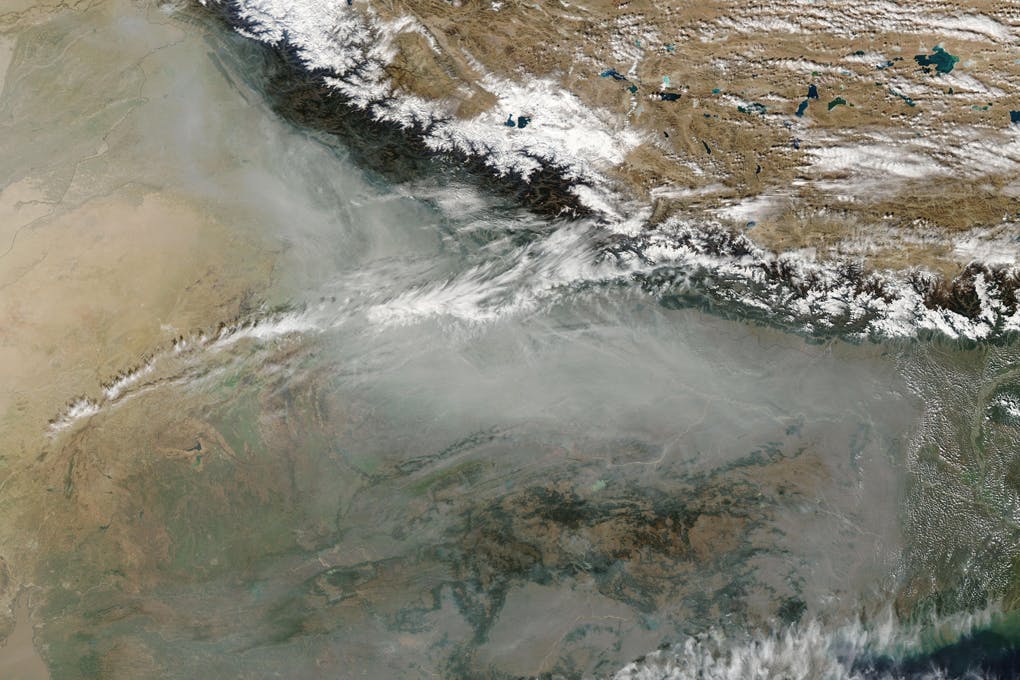 Nowhere on the planet has more polluted air than South Asia, where smog is believed to be affecting the annual rainy season and exacerbating climate change.

South Asia is home to 30 of the world’s 40 most polluted cities, and four of the five most polluted countries, owing to a toxic combination of belching vehicles, biomass burning for household cooking, agricultural burning, and coal combustion, according to IQAir AirVisual’s report.

Bangladesh is the world’s most polluted country by weighted population average, followed by Pakistan and Afghanistan. 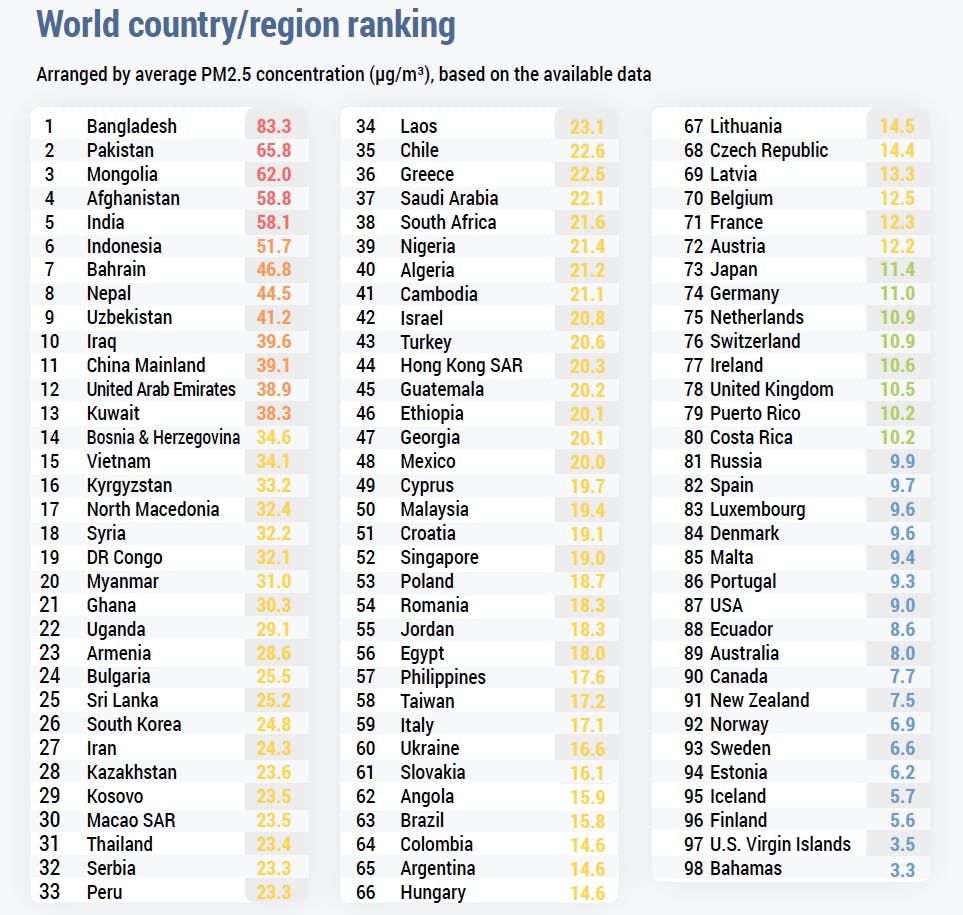 Countries ranked by air quality in 2019. Air quality is measured by average PM2.5 concentrations, based on the available data. Source: IQAir AirVisual

Half of the most polluted cities in the world are in India, and no Indian city in IQAir AirVisual’s report met the WHO target for annual pollution exposure.

The report noted that the country of 1.3 billion people still has a limited air quality monitoring network given its population size, with even populous cities lacking access to real-time air quality data. 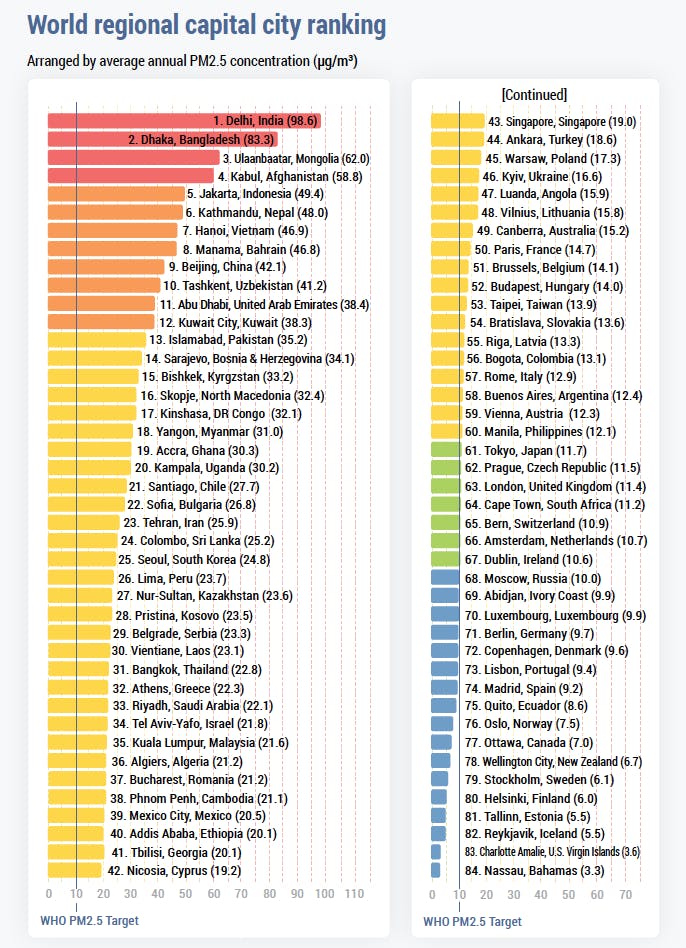 The world’s most polluted capital cities in 2020. Source: IQAir AirVisual

While the report found that South and Southeast Asia and the Middle East carry the “highest burden” of fine particulate matter pollution overall, with only six of 355 cities in those regions meeting WHO targets, Europe and North America are not immune to the effects of air pollution.

Europe has some of the world’s cleanest air, with Scandinavian skies among the world’s healthiest. But the continent is still struggling to control emissions from sources such as livestock, transport, industry, and commercial buildings. More than a third of European cities are failing to meet the WHO’s air quality guidlines, with the poorer eastern and southern parts of the continuent suffering from the worst quality air.

In the United States, famed for the Nixon-era Clean Air Act that is one of the most comprehensive air quality laws in the world, almost a fifth of cities fail to meet WHO air quality guidelines—an issue not helped by the Trump administration’s roll-back of air pollution regulations to prop up industries including the most polluting: fossil fuels.

Where Asia is breathing easier 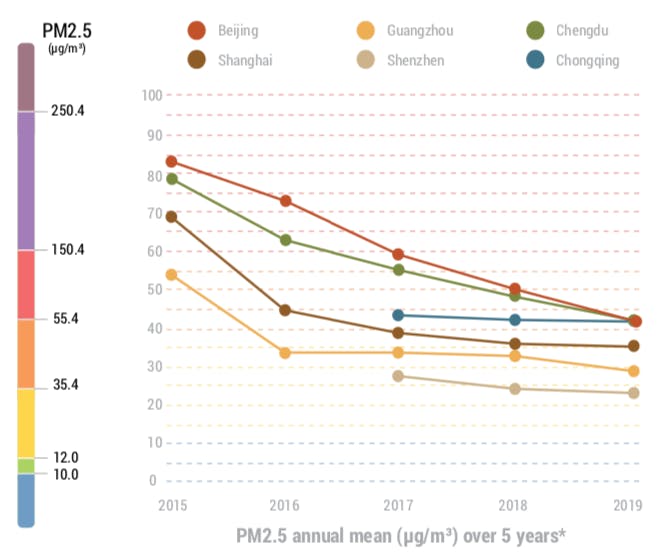 Despite the grim picture of Asia’s air quality in 2019, there were some positive stories—and none more so than in the world’s manufacturing centre, where more than a million people die a year due to air pollution-related illnesses.

Since introducing the Air Pollution Prevention and Control Action Plan in 2013, which was updated to cover more cities in 2018, China has seen air quality improve considerably, especially in Beijing.

Thanks to the closure of coal-fired power stations and bans on burning coal for heat, Beijing’s air quality has improved for seven years in a row, and pollution levels are now half of what they were in 2009; the number of hours residents spend breathing “good” air is now four times the level it was a decade ago.

Calamba, a tourist hotspot of 500,000 people 54km from Manila, has the cleanest air of any Southeast Asian city.

Manila is Southeast Asia’s clean-air capital, followed by Singapore, Phnom Penh and KL. None have air considered safe to breathe by WHO.

Southeast Asia’s most polluted capital, Jakarta, has seen PM2.5 levels jump by 66 per cent since 2017.

Though South Asia has the world’s dirtiest air, 35 per cent of global air pollution-related deaths occur in East Asia, mainly China, home to 47 of the world’s most polluted 100 cities.

The most polluted regional cities in India and China in 2019, Ghaziabad and Hotan, respectively, both have PM2.5 levels 11 times above the WHO limit.

South Korea is the world’s most polluted rich country; 61 of the top 100 most polluted cities in OECD countries are in South Korea, a country that depends heavily on coal for energy.

Nassau in the Bahamas has the world’s cleanest urban air.

Even South Asia is showing signs of improvement. PM2.5 levels in the world’s most polluted region have fallen by almost 15 per cent between 2018 and 2019. This is the result of better monitoring data, public awareness and government action, IQAir AirVisual’s report finds.

Last year, India introduced the National Clean Air Programme, an ambitious programme to fight pollution, and the country saw marked decreases in PM2.5 levels in 2019. However, air quality improvements were probably the result of a slowing economy and favourable meteorological conditions, as well as better air policies, the report noted.

Climate change and air pollution are inextricably linked, and IQAir AirVisual’s noted that a warmer world could mean deteriorating air quality in some regions.

Intensifying global temperatures, desertification and wind patterns could mean worsening air pollution in northern China due to dust storms, while warmer and drier conditions in California and Australia—which has just experienced some of the worst bush fires on record—could mean rising PM2.5 levels in the future for Australia and its neighbours.

“As environments become warmer and drier with climate change, the frequency and intensity of wildfires is expected to grow,” the report reads.

The World Bank estimates that air pollution costs the world about US$5 trillion annually in health and welfare, equivalent to the gross domestic product of Japan.