As winter bites, air pollution in India and Pakistan gets ‘crazy bad’

Air pollution is so bad in some South Asian cities that it's gone off the scale of the US Air Quality Index. Why? And what can it be done about it?

Since the start of the year, air pollution in major cities in India and Pakistan has reached levels well beyond what is considered hazardous to human health.

On 2 January, the air pollution in Lahore reached 591 on the US Air Quality Index (US AQI)—almost double the level, 300, considered to be “hazardous” by the Environmental Protection Agency (EPA).

The pollution is so bad in the northern Pakistan city that it has affected the power supply in the region, with power plants closing due to the heavy smog, leaving many communities without electricity.

On 3 January, the US AQI in Delhi, India’s capital, reached 581, according to data from consumer air monitoring network AirVisual. Levels of PM2.5—fine particules that penetrate deep into the lungs—reached about 12 times the level considered safe by the US government, with visibility poor. 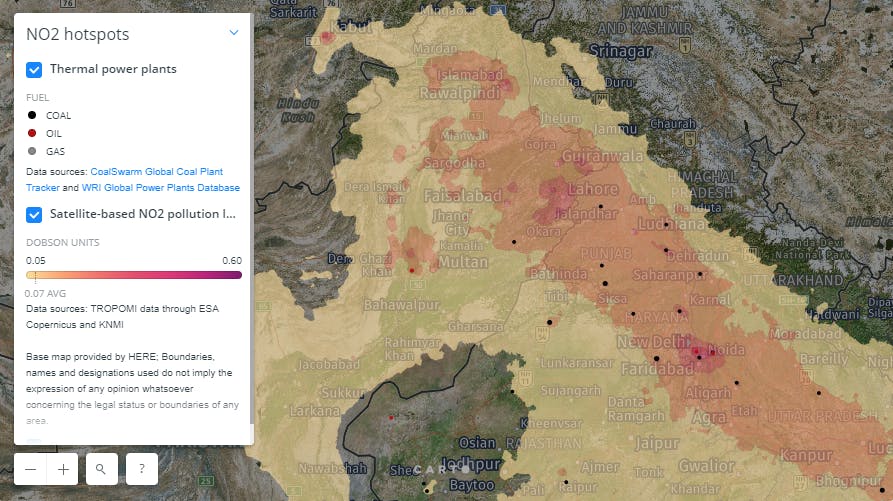 Both cities are affected by crop-burning and household fuel burning in the Punjab region in the cold winter months.

While the pollution in Lahore and Delhi is particularly severe now, the problem is not exclusive to these cities. Air pollution reached hazardous levels in the Bangladesh capital Dhaka and the former Indian capital Kolkata on 4 January.

“What we should really be talking about is pollution in the entire Indo-Gangetic plain all the way from Lahore to Dhaka, where around 800 million people live,” said Myllyvirta‏. The Indo-Gangetic plain is a large valley with relatively little wind for much of the year to disperse pollutants. 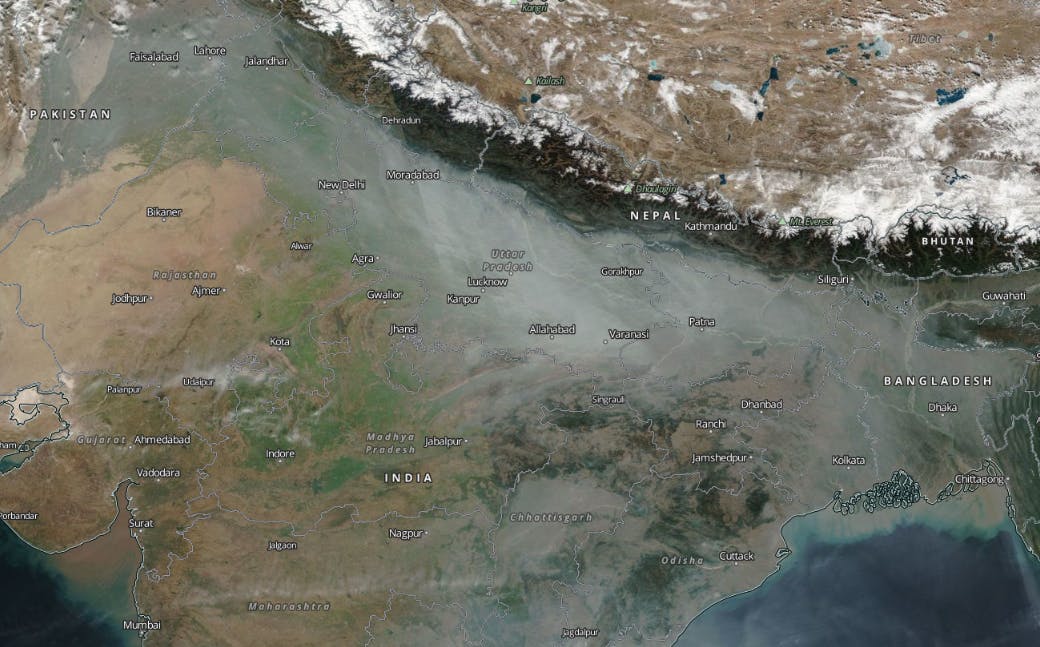 A murky grey band across of air pollution across the Indo-Gangetic plain. Image taken on 29 December 2018 from the Suomi NPP satellite via NASA WorldView.

The US AQI measures five key pollutants and categorises them in bands; 0-50 is considered “good”, 151-200 is “unhealthy” and 301-500 is deemed “hazardous”—anyone experiencing it may suffer health impacts and should avoid any strenuous activity outdoors.

The scale does not officially go above 500, because the EPA did not figure pollution would ever reach such high levels. Super-severe air pollution was given the term “crazy bad” by a US Embassy official in 2010, when AQI readings in Beijing eclipsed 500. The embassy later revised the term to “beyond index” and netizens in China dubbed 500+ readings as “broke the index”.

The World Health Organisation deems air quality scores above 500 to be more than 20 times the level of particulate matter in the air that can be considered safe for people to breathe.

Readings went off the US AQI charts again in 2013, when pollution in the Chinese capital reached a “post-apocalyptic” 755. Beijing’s air has markedly improved since as a result of a government anti-pollution plan hatched in 2013, although it reached “hazardous” levels on 2 January, according to AirVisual data.

Online air quality data providers such as AirVisual extended the US AQI to indicate levels higher than 500, but did not design the air quality pins on their maps to display four digit numbers.

“They didn’t realise the insane crazy poison soup in North India, Pakistan, Bangladesh and some other places like Ulan Baatar [the Mongolian capital] could see the index shoot up above 1000,” noted Myllyvirta‏. “So now 999 has become the new ‘crazy bad’/’broke the index’”.

What to do about bad air?

“What’s key is to implement these measures on the regional level and not just in a few cities—most of the headline-grabbing pollution in these cities originates outside of the city limits,” he said, adding that the causes of air pollution need to be addressed together and not in isolation—otherwise any solution will fail.

India launched a programme to address air pollution last year, a long-awaited response to the country eclipsing China as the world’s most polluted. But the National Clean Air Programme (NCAP) has been widely criticised for its weak implementation and enforcement.

At least one in eight deaths in India can be attributed to air pollution, which kills more people than tobacco, according to a national study released last month.