Rapid urbanisation is the defining challenge for Asia Pacific in coming decades. Eco-Business looks at some smart solutions adopted by cities to keep up with growing energy and waste needs and strengthen their economies in the process.

Asia Pacific is set to pass a major milestone in 2018: The United Nations predicts that more than half its population will be living in cities by then, meaning the region can no longer be regarded as predominantly rural.

More than 2 billion of the region’s 4.3 billion people already live in urban areas, and another 1 billion will join them by 2040. But already, many Asian cities are buckling under the stress of this unprecedented rate of urbanisation.

Slums, hazardous air pollution levels, mountains of unprocessed waste, and the dreaded practice of load-shedding — that is, intentional power cuts in some areas engineered to prevent a city-wide blackout — are just a few visible symptoms of the stress on the economic, transport, waste management, and energy infrastructure of cities.

Many policymakers and planners have turned to technology to overcome these challenges. From renewable energy to sensors and data analytics to cutting-edge engineering and hardware, cities are adopting a range of high-tech solutions to position themselves as ‘smart’ and sustainable.

Eco-Business takes a look at how three of Asia’s smartest urban areas are harnessing technology to future-proof themselves.

Tucked away in a corner of Ashiya city in Japan’s Hyogo prefecture, Shioashiya is a town designed and developed by PanaHome, a subsidiary housing company of Japanese electronics giant Panasonic.

Shioashiya, which houses 400 detached houses as well as an 83-unit condominium complex, is PanaHome’s first attempt to develop a smart city as an independent project. But this has not stopped it from setting the ambitious aim of wanting to be a net zero energy city.

Launched in 2012, Shioashiya spans about 120,000 square metres, and is designed to accommodate 9,000 people; every house and community facility, as well as the overall town layout, has been designed to reduce energy use and maximise opportunities to use renewable power.

Each house in Shioashiya is fitted with rooftop solar panels, energy storage batteries, and a home energy management system which uses renewable energy when possible, and enables excess energy to be shared with neighbouring homes. It also turns off household appliances when they are not in use. 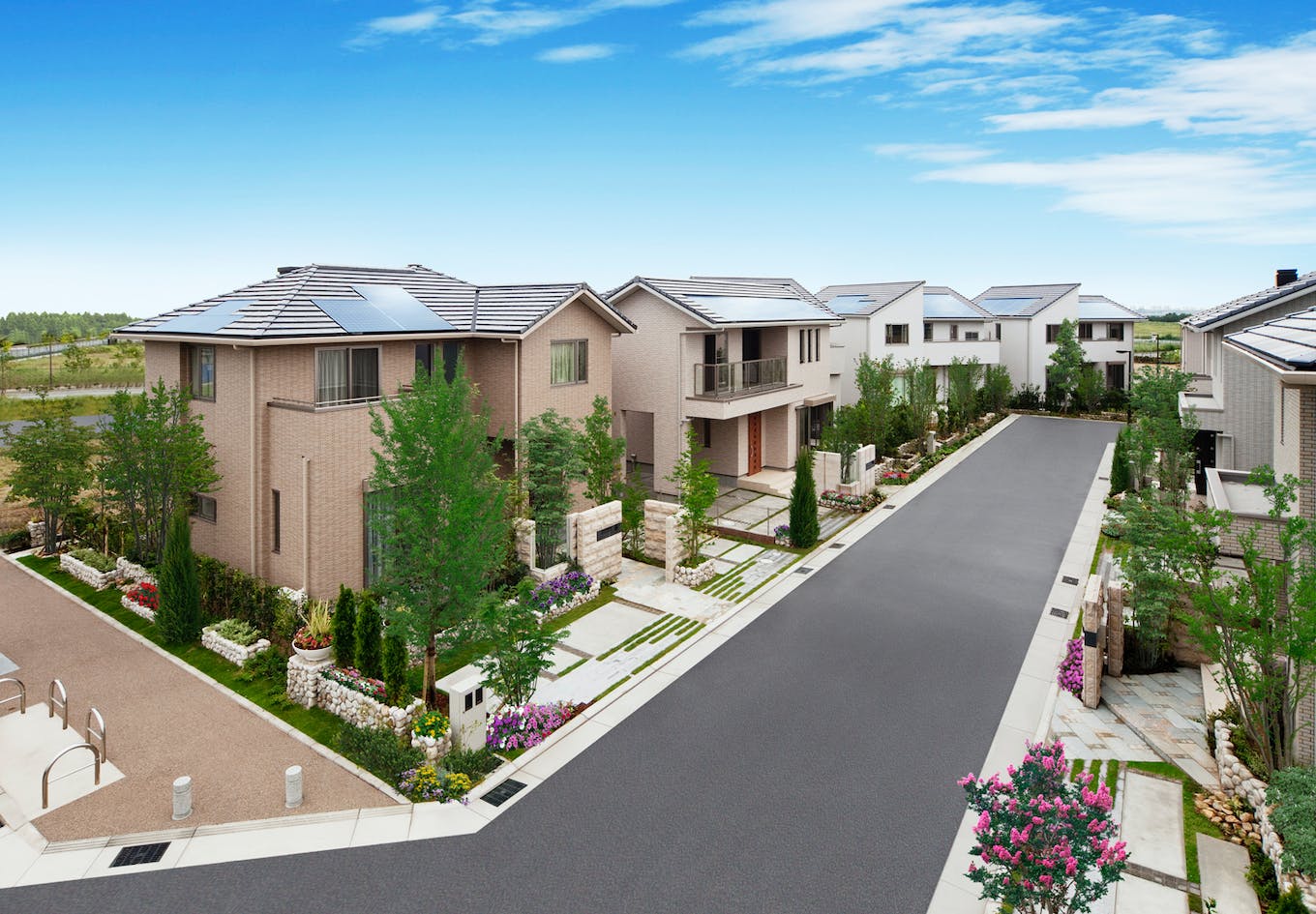 The architecture of the detached houses is also geared towards energy reduction. An insulation technology known as Puretech and an Eco-Navi ventilation system keep the house warm during the summer and cool during the winter, with minimum energy required to do so.

PanaHome has also made the condominium complex in Shioashiya net zero-energy through the use of a rooftop solar power system, and fuel cell units installed in each apartment.  A fuel cell is a power generator which produces electricity from a chemical reaction between hydrogen and oxygen and it is widely hailed as a cleaner form of energy generation than conventional fossil fuel sources.

Thanks to its innovative energy generation infrastructure, the condominium complex generates about 199 megawatt hours of energy per year. This exceeds the entire estate’s energy consumption and the power that is sold back to the grid generates some US$11,700 of annual income for the management association, says PanaHome. 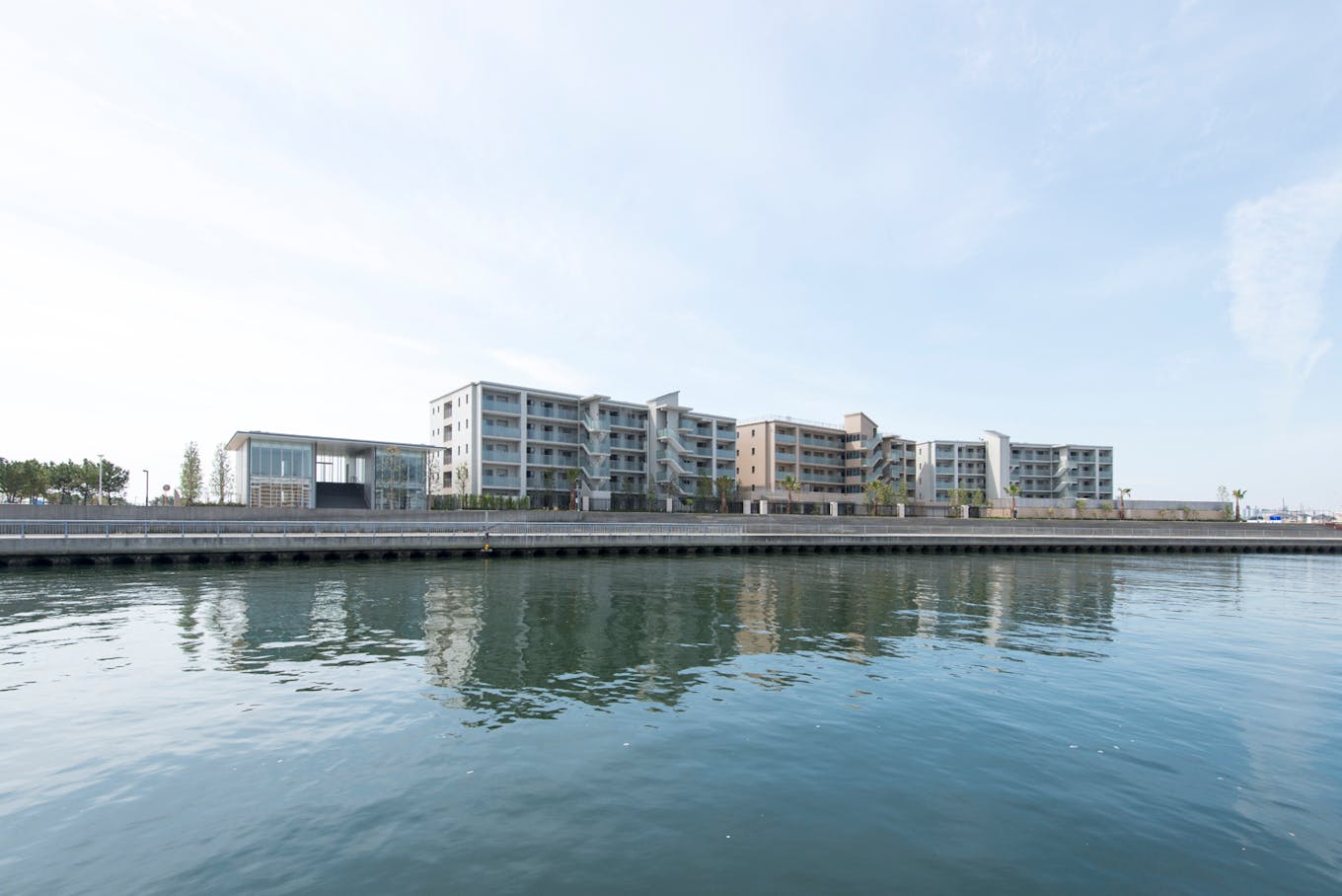 The city’s condominium complex is also zero-net-energy, thanks to rooftop solar panels on each building and fuel cell power generators in each unit. Image: Panasonic

Beyond its residences, the town’s community centre, known as the Solar-Shima Terrace, is also fitted out with a solar system and storage batteries, and the town’s layout itself also helps minimise energy use. 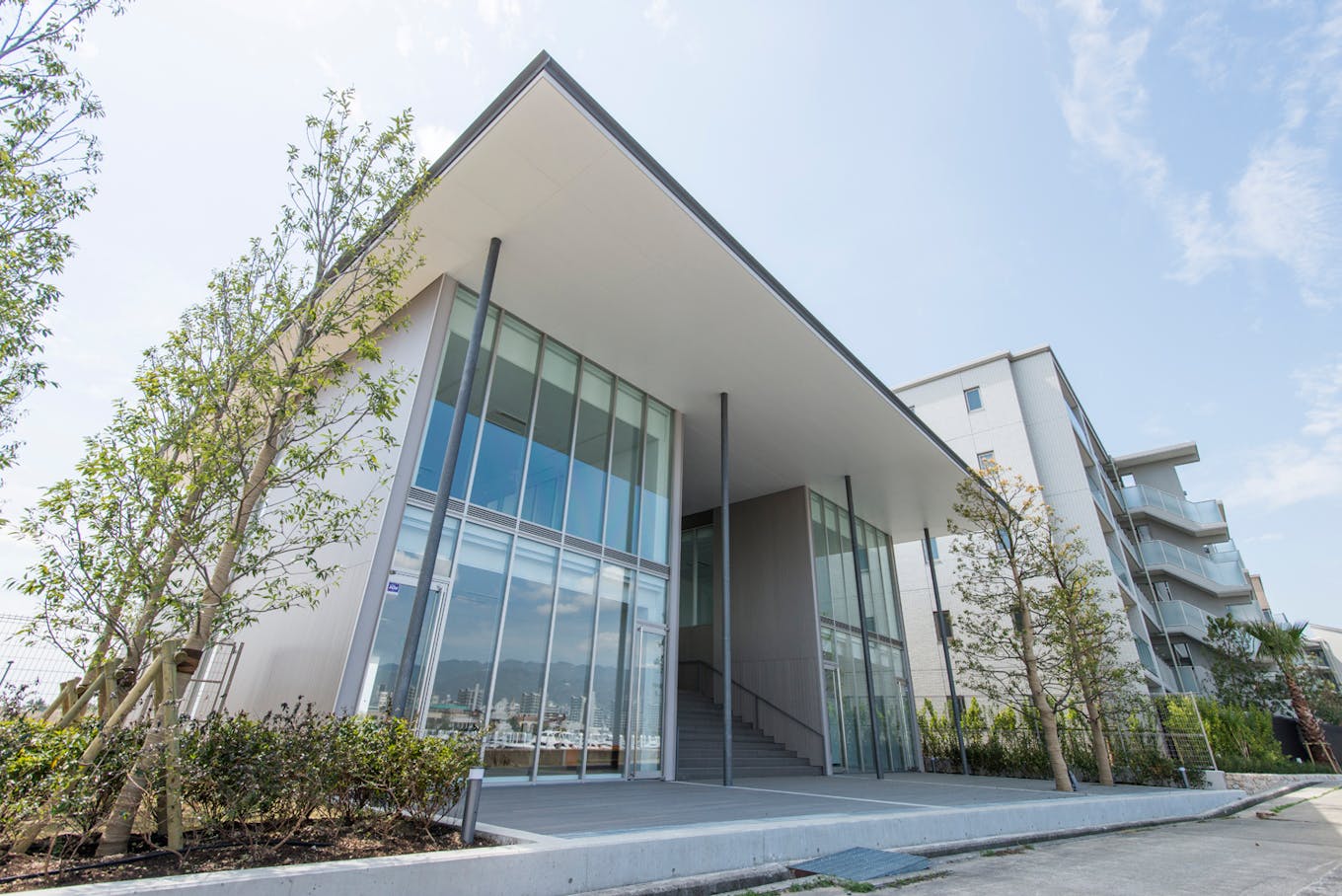 This is because it uses an architectural technique known as passive design to make the most of ambient wind, sunlight, and wind — which is abundant, as Shioashiya is located between a sea and mountains — to cool, ventilate, and illuminate buildings in the town.

“The technologies showcased in Shioashiya are ideal for scaling up across Japan, and for other Asian countries which are pursuing greater energy efficiency in their cities and buildings,” Tanaka adds.

2. Songdo, Korea: Not a garbage truck in sight

For most urban residents, the unpleasant whiff of a passing garbage truck is part and parcel of city living. But visitors to Songdo International Business District in South Korea will quickly notice that there are no waste collection vehicles plying the streets.

This is because the smart city — a 600-hectare expanse of urban area built from scratch on reclaimed land as a private real estate development project — has a waste collection system using pneumatic tubes. Any trash that is thrown into a bin at home or on the street is transported directly to a central sorting and disposal facility, where it is recycled or incinerated. 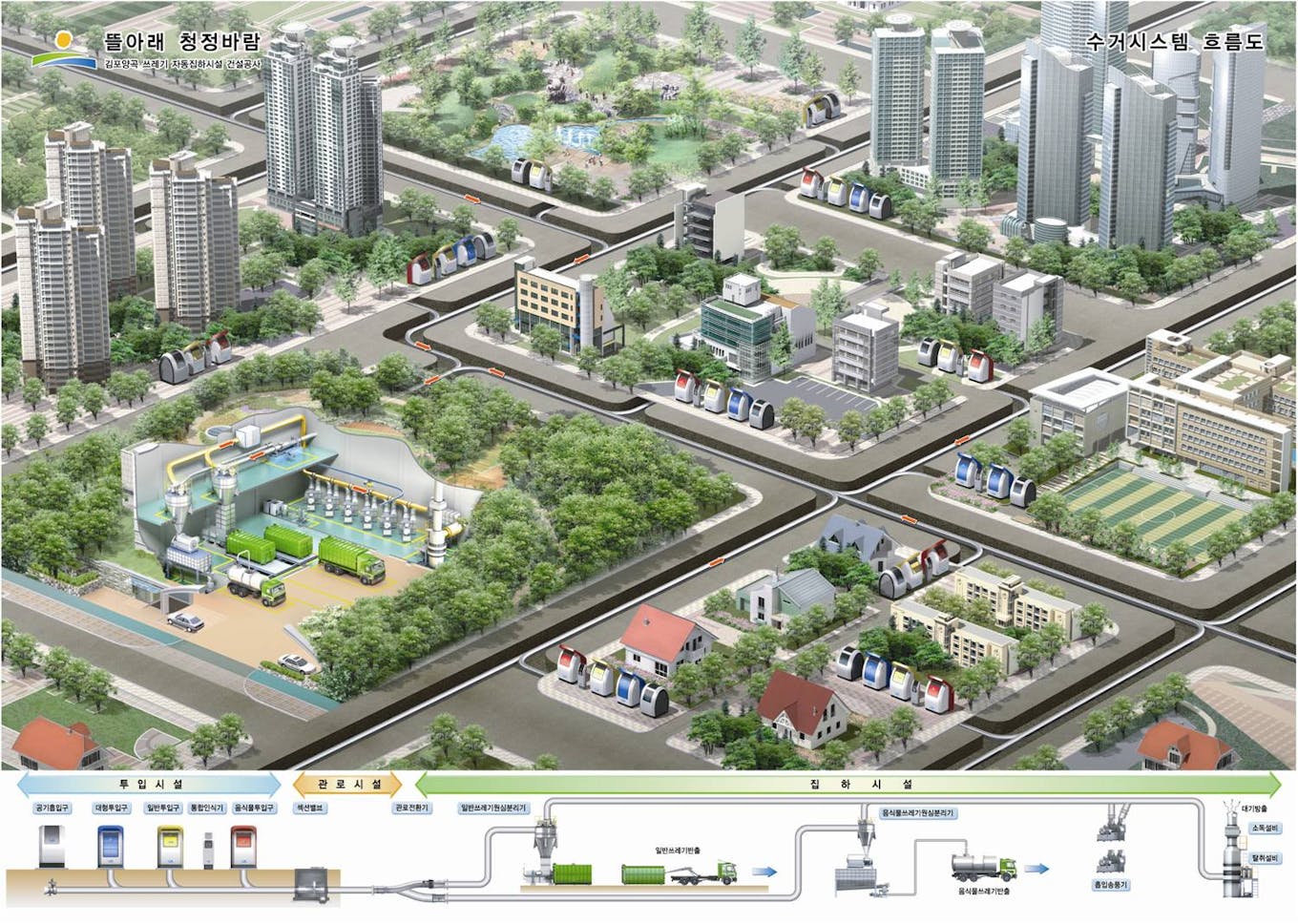 Thanks to this efficient and convenient waste collection system — it automatically sorts the waste that enters the facility, and reportedly needs just seven employees to operate — Songdo expects to recycle 76 per cent of its waste by 2020. 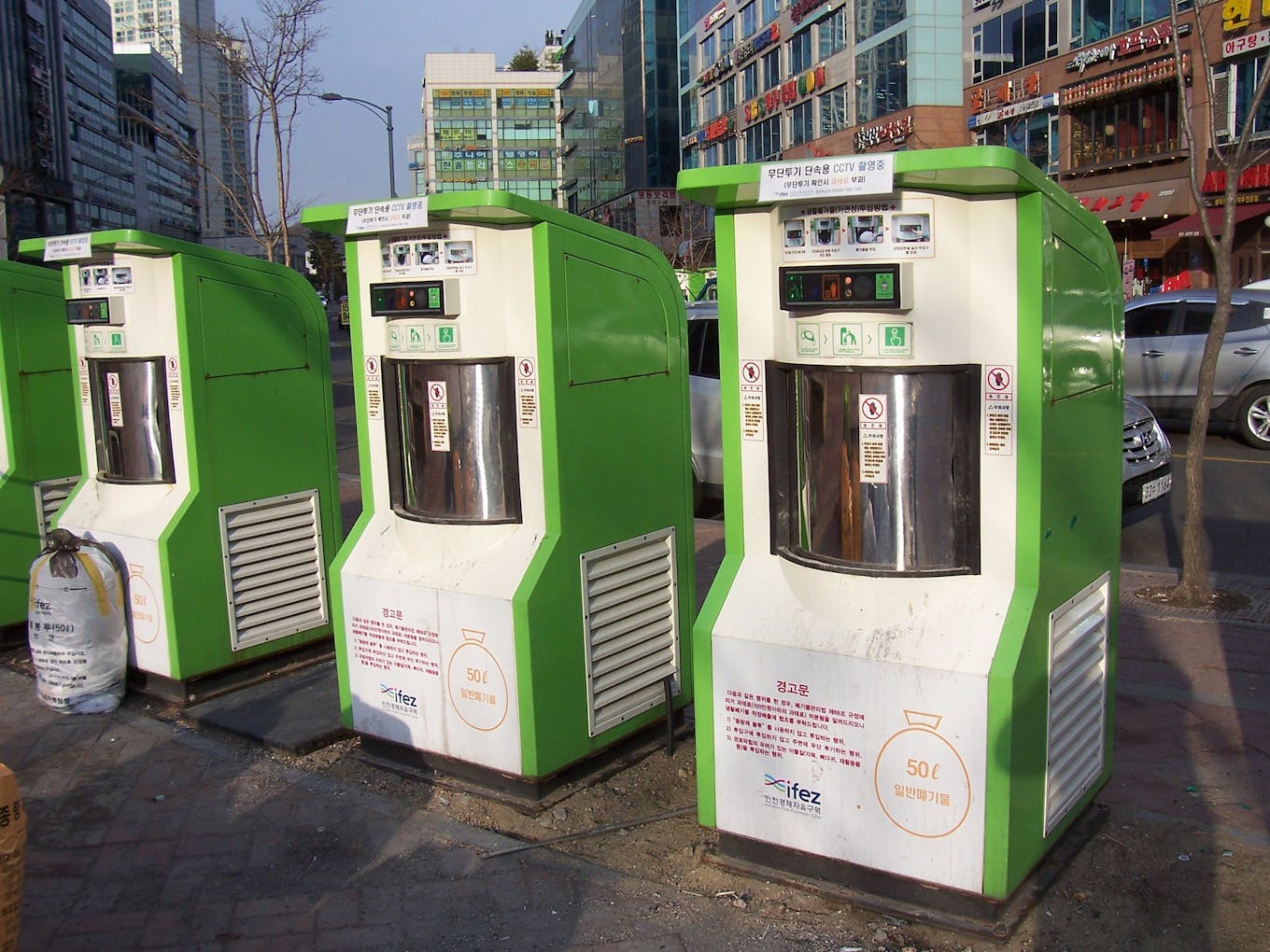 Songdo’s pneumatic, automated waste management infrastructure  is powered by a high-speed data network infrastructure and it is just one of the many features that have earned the US$40 billion development the accolade of the smartest city in the world, as well as one of the most sustainable.

Other smart features in this city — which was developed as a joint venture between the City of Incheon, New-York based developer Gale International, Korean steel multinational POSCO, and Morgan Stanley Real Estate — include numerous charging stations for electric vehicles, sensor-based traffic control services, and city-wide security surveillance to keep citizens safe. 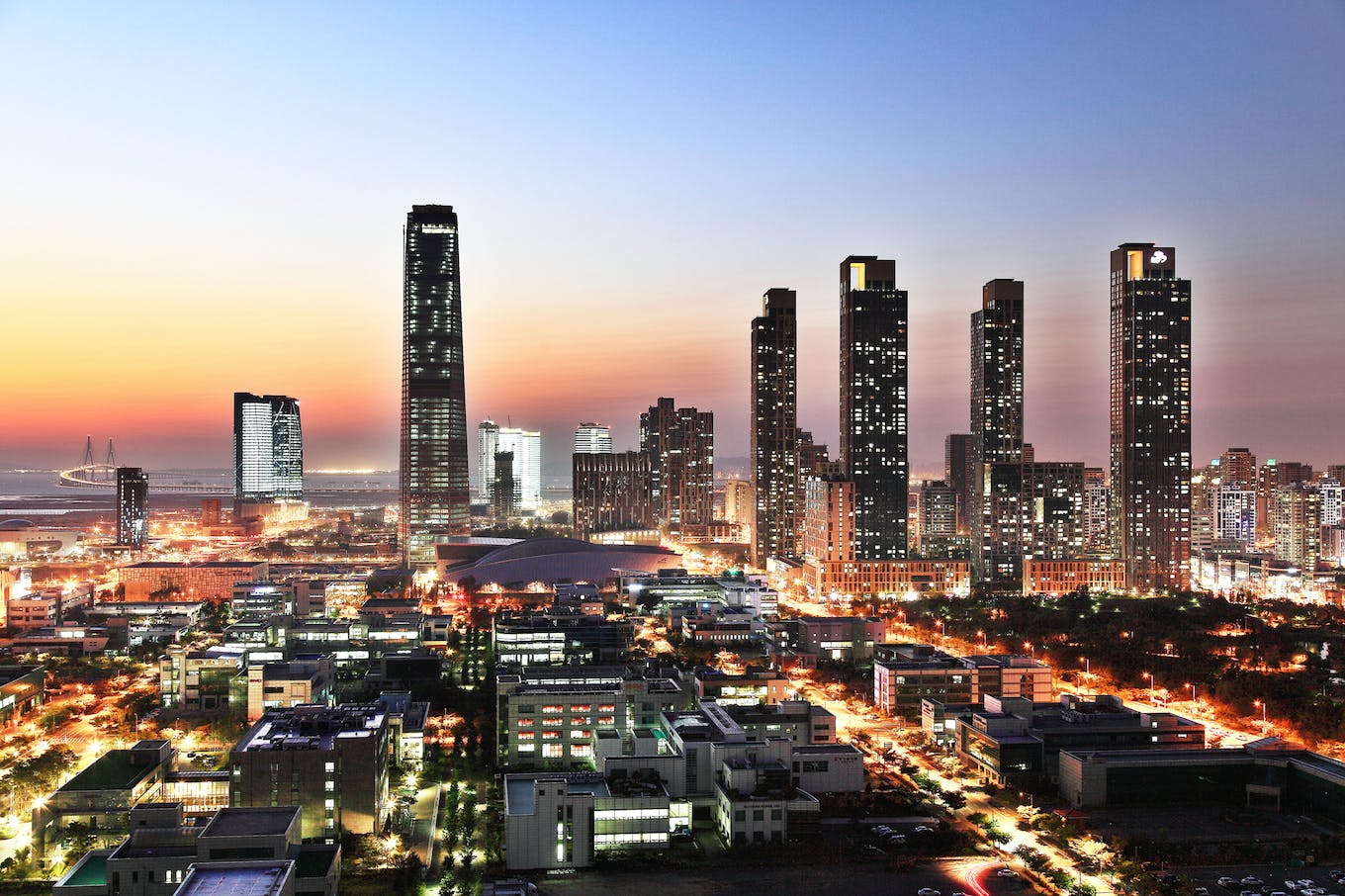 Songdo’s skyline by night. The US$40 billion project is set to be complete by 2020, and accomodate 65,000 people by then. Image: Songdo IBD

Although the city is still under construction, it is already habitable. While only 40,000 residents live in Songdo today, it is already home to about 2,600 businesses as well as several United Nations agencies. When it is completed in 2020, Songdo International Business District expects to house 65,000 people.

Smart technology undoubtedly has the potential to make cities more sustainable; but if done right, it can also bolster a country’s economy and create new opportunities for entrepreneurs and attracting international investment.

Singapore, for example, has used its ambition to become the world’s first Smart Nation as a springboard for positioning itself as Asia Pacific’s hub for entrepreneurship and innovation.

To do this, the city-state has invited firms from around the world to use Singapore as a “living lab” to test and commercialise new technology solutions, and has in the last 10 years invested more than US$22 billion in research and development efforts.

Singapore’s government was also instrumental in developing JTC LaunchPad @ one-north, a community for start-up companies in the island’s Ayer Rajah neighbourhood. The complex houses about 500 start-ups and 2,000 employees across a range of sectors including electronics, information and communication technologies, biomedical sciences, and the media. 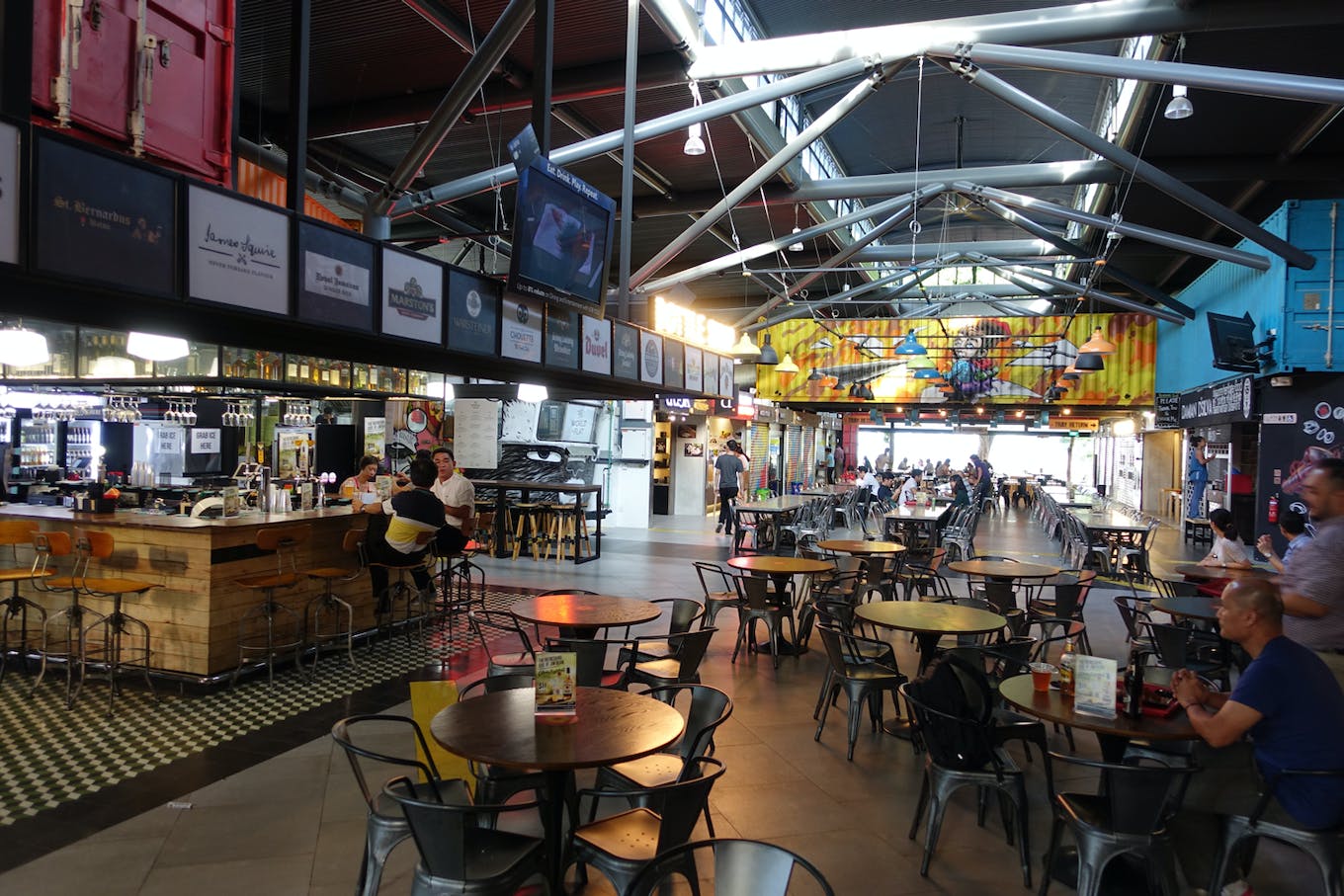 Dubbed ‘the world’s most tightly packed entrepreneurial ecosystem’ by The Economist Magazine, Launchpad is home to prototyping labs, business accelerators and venture capital firms as well. 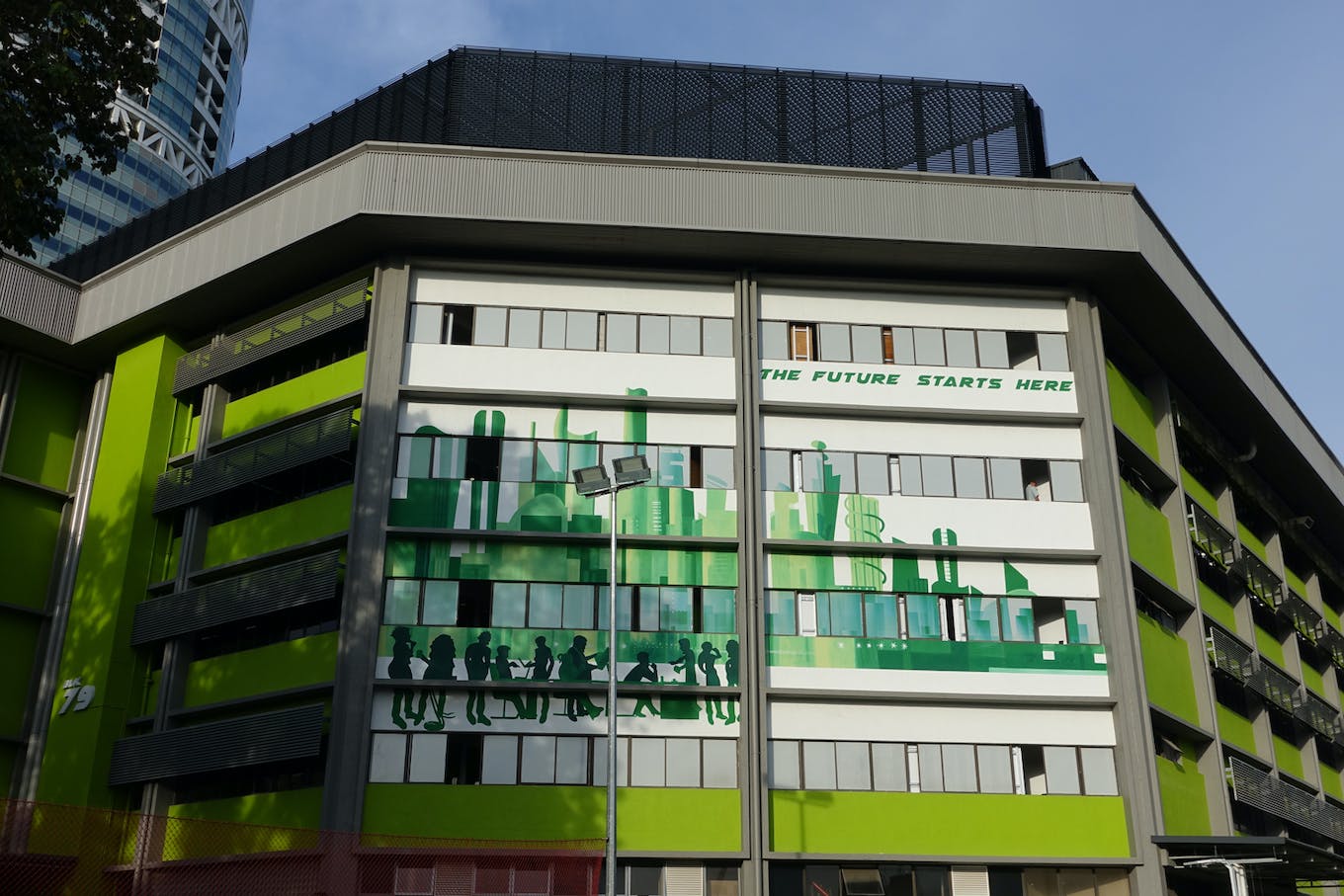 Thanks to Singapore’s investment in its Smart Nation Vision, as well as its global reputation for being an easy country to do business in, the number of start-ups in the city-state increased from 24,000 to 55,000 between 2005 and 2015.

According to the Asian Venture Capital Journal Research, Singapore-based technology businesses also attracted US$1.7 billion venture capital in 2013, putting the country ahead of its other Asian counterparts including Japan, South Korea and Hong Kong.

Singapore’s investment in boosting its start-up ecosystem has also been instrumental in attracting foreign companies to establish regional headquarters here.

Among these is American customer service firm Zendesk, which in 2014 acquired a local start-up Zopim and decided to make Singapore its Asia Pacific headquarters shortly after that.

As Mikkel Svane, Zendesk’s founder and chief executive puts it: “Singapore is the perfect gateway to the entire Asia-Pacific region. It serves as the regional home to so many global companies and a hotbed of emerging local businesses and start-ups.”

More from Smart homes for the future