This year's Ecosperity conference explored how to get Asia's circular economy spinning, speed up Southeast Asia's clean energy transition, and better manage the region's dwindling water resources. Here's what we learned this year.

Before the opening speech at the Ecosperity 2019 conference at Marina Bay Sands in Singapore on Thursday, as delegates were finishing their morning coffee while oggling at a terrifying 40-metre wide screen of the rising seas, Eco-Business approached Christiana Figueres, one of the architects of the historic Paris Climate Agreement, to ask her a question.

How hopeful was she that humanity would cut carbon emissions in time to meet the 12-year deadline set by the Intergovernmental Panel on Climate Change (IPCC) to avoid the worst effects of the climate crisis? The ebullient Costa Rican was charasterically forthright in her response.

We have no choice, she said: If we don’t act, then Gardens by the Bay—Singapore’s flagship coastal tourist attraction that is overlooked by Marina Bay Sands—will become Gardens beneath the Bay.

How to prevent rising sea levels and the extreme weather that will result from global warming that breaches the IPCC’s 1.5 degrees Celsius threshold was the main theme running through Ecosperity this year, which focused on finding solutions to the climate crisis, and accelerating the pace of change towards a low-carbon and resource-efficient future.

By 2030, unless we put carbon back into the soil, we would have decided quality of life not only for our children and grandchildren, but perhaps for the next 1000 years.

Here are five things we learned from the sixth edition of Ecosperity:

To instill the audience with a sense of urgency, Dr Will Steffen, Emeritus Professor, Australian National University and Senior Fellow, Stockholm Resilience Centre, laid down some hard scientific facts. The planet, he said, is warming 175 times faster than the background rate of change, which is why polar bears are drowning and flying foxes in Australia are dropping dead out of the sky in the extreme heat.

“After five IPCC reports and 20 UN climate meetings, we’ve seen a failure of the climate science policy system,” he said. If humanity doesn’t put words into action within the next five years, we don’t stand a chance of avoiding what Steffen called “tipping cascades,” the rapid decline of interconnected ecosystems that collapse one after the other. “We need to become a regenerative society,” he urged.

We are getting close to tipping points that we won’t be able to get back from.

Figueres was equally damning about a species she said has harmed all of the Earth’s systems, including its own economic system, in just 50 years. But she said that humanity could reverse the damage done in “the age of exponentials,” citing four ways in which transformative change was already underway: the demise of coal, the proliferation of renewables, the rise of electric vehicles, and a finance system that has finally woken up to climate risk.

Victoria Kwakwa, Regional Vice president, East Asia and the Pacific, World Bank was also hopeful. She pointed out that while climate change could push 100 million people into poverty by 2030, and by 2050 there would be 143 million climate migrants, a transition to clean energy presents US$26 trillion in economic opportunities and would create 65 million jobs.

We have to decarbonise as fast we can, not as fast as we’d like. 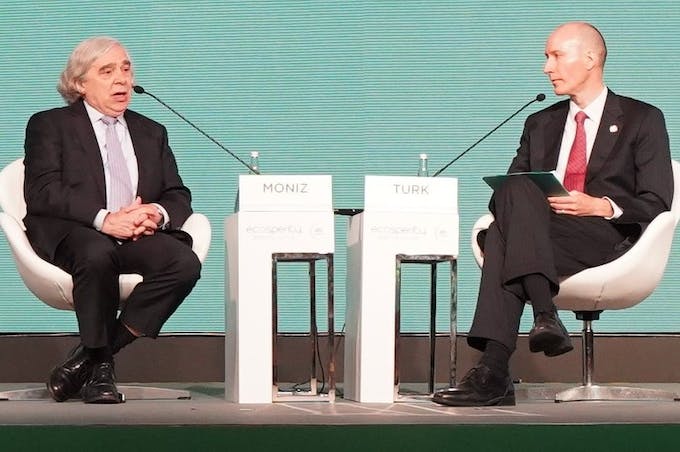 Nowhere in the world is the shift to clean energy happening as slowly as Southeast Asia, a region that has more coal-fired power projects in the pipeline than anywhere outside China and India. With the region’s GDP expected to triple by 2040, the energy infrastructure that supports this growth must be clean and sustainable to aid “very deep decarbonisation” of the world’s economy by the middle of the century, said Dr Ernest Moniz, Chief Executive of Energy Futures Initiative and Nuclear Threat Initiative, and Special Advisor to the President of Massachusetts Institute of Technology (MIT).

While Singapore is not blessed with renewable energy resources, Moniz noted that its neighbours are. But the challenge is making these resources readily available at scale, speed and reasonable cost. “This region needs to think about cross-border infrastructure to make renewable solutions more easily available,” he said. But can Association of Southeast Asian Nations (ASEAN) countries work together to make this happen?

One renewable energy option proposed for Singapore was hydrogen, another was fusion energy. Pierre-Etienne Franc, Vice-President, Hydrogen Energy World Business Unit, Air Liquide, said that hydrogen would be the best way to transport clean energy to Singapore, which is almost entirely dependent on natural gas.

Ian Chapman, Chief Executive, UK Atomic Energy Authority, suggested that fusion energy could be an option for Singapore, as it is clean, carbon-free and does not use much land.

However, Wong Kim Yin, Group Chief Executive of Singapore Power, reminded the audience of the need for near-term solutions to improve energy efficiency.. “Even as we think about innovation—and fusion and hydrogen are all very promising—we are thinking about what we’re doing now to move closer to the [exponential] curves [talked about earlier],” he said.

Wong cited district cooling as one technology that could reduce the energy consumption of airconditioning by 42 per cent, and help Singapore hit its Paris Agreement targets of reducing energy intensity to 36 per cent of 2005 levels by 2030.

We’re in crisis mode. Traditional research is too slow. In 20 years you might win a Nobel prize, but we don’t have 20 years. 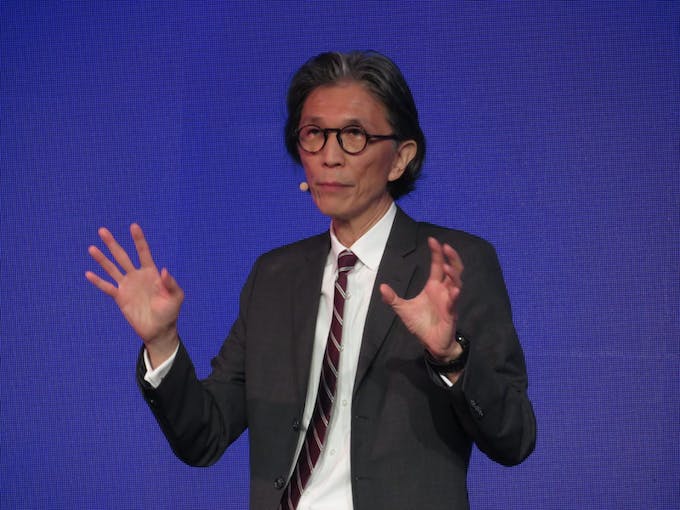 The fashion industry produces 10 per cent of the world’s carbon emissions—more than shipping and aviation combined. By 2050, fashion will produce more than a quarter of emissions, on a par with agriculture, explained Ariel Muller, Asia Pacific Managing Director for sustainability non-profit Forum for the Future. So how can this booming sector be disrupted in a way that reduces emissions and cuts waste?

To find the Tesla or Impossible Foods of the fashion industry will take a new approach to research and development to find and deploy circular economy solutions at speed, said Edwin Keh, Chief Executive of Hong Kong Research Institute of Textile and Apparel. “We need to get solutions out quickly—and make improvements later. We need to solve problems in weeks and days, not months and years,” he said, citing the software industry as inspiration for the fashion business.

Just over a year ago, Swedish fast-fashion brand H&M announced its ambition to be 100 per cent circular and renewable by 2030. H&M’s Global Environment Manager for Production, Harsha Vardhan, said the company faces an existential threat. H&M’s two most-used resources are cotton and polyester. “But in the future, when oil prices go up—which they will—what will happen to our supply of polyester? And what will happen to our supply of cotton if farmers switch to growing food?” he said.

To find the solutions its company needs to stay in business, collaboration is critical, Harsha said. “We’re not researchers. We don’t really know how materials work. Brands, research institutes, customers—the whole industry has to work together to find solutions that scale.”

There is no such thing as waste. Just a wasted asset.

5. How to save our most precious resource? 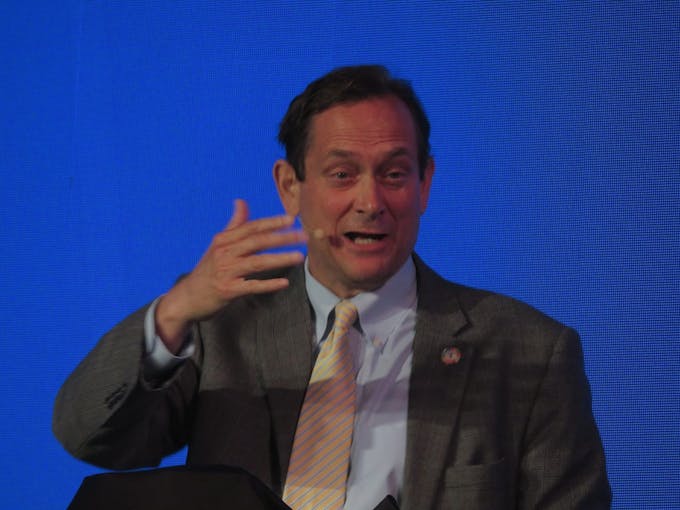 The first system to be hit by climate change is humanity’s most precious resource—water. By 2030, the world’s water supply will fall short of demand by 40 per cent, according to the World Bank. So how to manage the resource on which all life depends?

Dr Helge Daebel, the investment director for water at Emerald Technology Ventures, an industrial technology investment firm, said that soon artificial intelligence will enable water pipes to detect leaks before they occur, by identifying areas of stress and corrosion. This will enable specific parts of the pipe to be repaired without having to dig up the whole system, reducing maintenance costs by up to 80 per cent.

The panel also explored how to find value in water waste. George Hawkins, Founder and President of innovation consultancy Moonshot Partners, recalled the time his previous employer, District of Columbia Water and Sewer Authority, had spent US$1 billion removing phosphorus from the water supply.

“Phosphorus is a substance that is essential to life. Everyone is treating it as waste and sending it to landfill. Twenty years from now, the amount of resource that can be recovered from water will be incredible. It will be resold and reused.”

“There is no such thing as waste. Just a wasted asset,” he said.

More from Ecosperity 2019: From ambition to action