With their eyes firmly glued to the action on the football pitch, spectators at the 2010 World Cup in South Africa would not have missed the Chinese characters adorning the stadium’s advertisement boards.

The words read: Yingli China: Solar into every home. It was the first time that any Chinese characters had ever been on display at a World Cup, and it marked the coming-of-age of a Chinese firm that grew from a local green energy venture founded in Baoding, China in 1998 by Miao Liansheng, to become the world’s largest solar manufacturer.

The 58-year old, who has also been Yingli Solar’s chairman and chief executive since 1998, ventured into the solar industry after years in the military and later, the cosmetics industry. He set up Yingli Solar in Baoding with no expertise or experience in the sector, but a strong conviction that solar energy presented a valuable business opportunity and with crucial government support.

In a recent interview with Eco-Business, Angie Koh, managing director of Yingli Solar’s Southeast Asia headquarters in Singapore, recalls how the company’s off-grid solar booth at the World Cup remained the only bright area when all the lights in the stadium had been turned off after matches, and “let’s meet at Yingli” became a common refrain among match goers.

The company was also the first renewable energy company to sponsor the global football tournament.

Four years later, Yingli Solar has become one of the brightest spots on the global energy landscape. The company, listed on the New York Stock Exchange since 2007, is now the world’s largest solar panel manufacturer by number of modules manufactured, and has shipped more than 40 million panels with a total capacity of 10 gigawatts (GW) to 50 countries to date.

Yingli Solar opened its Southeast Asia regional headquarters in Singapore in early 2011. Koh, who has over 10 years of experience in the banking and finance industry, joined Yingli in 2010 and has led the company’s expansion in Asia ever since. She is responsible for the company’s strategy and business development, and managing and expanding Yingli Solar’s distribution partnerships in Southeast Asia. 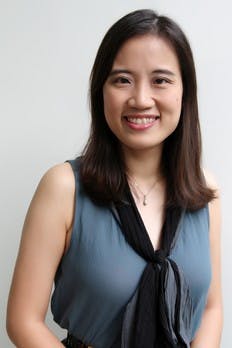 She speaks about Yingli’s rise to the top of the solar industry, the company’s involvement in football, and its mission to “prove affordable green energy for all” through providing low-cost but good quality solar panels.

Yingli Solar was founded in the early days of the solar industry, which has changed significantly since. What have been some of the most notable stages in the company’s journey so far?

When Mr Miao first ventured into photovoltaics (PV) in 1998, there was a lot of scepticism from the public because solar energy was expensive and there was no market for it at the time. There was also a lack of expertise on solar technology – Mr Miao also did not have any prior experience in solar.

Nevertheless, the Chinese government was keen to pursue solar energy and to address the lack of expertise surrounding PV technology, the government initiated study missions to Australia so that Chinese entrepreneurs like Mr Miao could learn about solar technology in the late 1990s and early 2000s.

For the first five years, the company went through a learning phase, which involved building up a team of people familiar with solar technology and setting up the infrastructure to begin manufacturing solar panels.

We commenced module production only in 2003 with an initial capacity of 3 megawatts (MW), which can power about 750 typical Singapore homes. We were listed on the New York Stock Exchange in 2007 and in 2012, we became the world’s largest solar panel manufacturer by number of solar modules manufactured.

The earliest challenge we faced was the high cost of polysilicone, which is the raw material for photovoltaic panels. About five years ago, it cost US$100 per kilogram (kg) – but the price has now dropped to US$20 per kg. When prices were still high, there was no demand for solar panels.

When solar began to have higher profit margins between 2008 to 2011, there were suddenly a lot of competing solar manufacturers, some of whom produced panels of very poor quality. This gave a bad name to the industry in general, and in 2011, it went into a difficult ‘winter period’.

But the toughest time is almost over, and Mr Miao says that spring is coming for the solar industry – this is because solar technology and the price of panels have stabilised, the cost of polysilicone has reduced, and new markets are opening up.

How did Yingli weather these challenges? And what has enabled Yingli to thrive in this industry?

When Yingli was listed in New York in 2007, it attracted new funding. While most companies at this stage chose to expand rapidly, Mr Miao chose to strike a balance between expansion and consolidating our foundations. He invested in research and development (R&D), which allowed us to come up with products such as the n-type monocrystalline panels which give us an edge over our competitors. These panels use a special type of silicone that makes modules more insensitive to metallic impurities, increases their efficiency, and slows down their  degradation rate.

In addition to our investment in R&D, what has helped us flourish through these difficult times is our investment in branding through our involvement in football, our pursuit of new global markets to diversify our revenue sources, and the fact that we kept a close eye on maintaining product quality even as we worked to reduce costs. By not compromising on quality, we were able to build up a good reputation in a competitive market and retain loyal customers over the years.

Our business model of vertical integration – where all stages of the PV manufacturing process from producing polysilicone to module assembly is done in-house – also helps us to control the cost and quality of our products, increase energy efficiency and reduce pollution levels across the entire production process.

Yingli has set up more than 30 units and branch offices since 1998. Why did it set up a Southeast Asian headquarters in Singapore and what’s your outlook for solar in Asia?

Europe was Yingli’s biggest customer base in the past, but we are now expanding into other parts of the world. These include the United States, Africa, Australia, Latin America, and Southeast Asia.

Southeast Asia is our latest interest area. We forecasted a few years ago that Asia would overtake Europe as the biggest solar market. With so many people in this region still living without electricity, and with an abundance of sunlight in the tropics, it is natural that solar would become a major source of renewable energy.

In some countries such as Indonesia, we found it challenging to work in the market due to unclear government policies on supporting solar, a lack of local expertise and energy system design that was not optimum for supporting new energy technology.

But we had a particularly smooth experience in Malaysia in 2011, where the government planned to introduce a feed-in-tariff just as we set up our office in Singapore. Due to this fortuitous timing, we managed to capture 15 per cent of the market share in Malaysia by 2013.

High electricity prices in the Philippines have also pushed more people to explore solar energy as a way to offset expensive energy from the grid, and we have seen some success in the country in the last two years.

In Singapore, we are working on a 3.5MW installation with the Nanyang Technological University that is due to be completed in December and a 1MW set-up at the PUB, Singapore’s national water agency’s Chua Chu Kang Waterworks. This installation will be finished in March next year.

Yingli’s sustainability efforts include participation in the WWF Climate Savers Initiative and the recent publication of the company’s first corporate sustainability report. What is the motivation behind these efforts?

We participated in the WWF Climate Savers, in which we have aimed to reduce greenhouse gas emissions from the module production and transportation processes, to show that we walk the talk. We produce green energy products, but also want to commit to addressing wider issues of carbon emissions and establish green manufacturing guidelines for the industry.

We produced the sustainability report as a response to increasing queries from our customers, who wanted to know more about the environmental, social and economic impact of our global operations. The environmental data in the report focuses on our headquarters in Baoding, where most of our manufacturing takes place. We hope to develop a comprehensive reporting process for environmental data that we can systematically extend to all our manufacturing operations in the future.

These efforts help build confidence and loyalty among our customers.

In the industry’s early days, solar companies primarily targeted the government as potential customers because prices were too high for individuals or businesses to afford.

Just as we were brainstorming ways to reach out to the mass consumer market, FIFA (International Federation of Association Football) approached us with a sponsorship proposal for the 2010 World Cup – this appealed to us because football is the world’s most popular sport with the largest fan base, and that’s how our sponsorship of football began.Our investment paid off - the publicity generated from our corporate display booth and branding actually crashed our website.

In 2011, FIFA approached us again to sponsor the 2014 World Cup. We were able to plan our involvement with ample time and we installed more than 1,500 panels with a total capacity of 390 kW on the roof of the Maracana Stadium in Rio de Janeiro, and a 1.5MW solar power plant at the Arena Pernambuco. The latter would power the stadium’s energy needs on match days, and provide clean energy to the local community the rest of the time.

What policy intervention do you think are necessary to help private sector solar companies thrive in Asia?

Grid parity has already reached some countries such as Singapore and the Philippines, and this is because the government does not keep electricity prices artificially low through subsidies. There is a high chance that solar will approach grid parity in more countries as governments continue to scale back on subsidies.

But governments cannot reduce tariffs without finding alternate sources of affordable energy, and this is something they are struggling with.