The luxury apartment is one of many proposed developments on Federal Hill, one of the city’s last green lungs surrounded by residential areas that have been affected by landslides.

Residents of Bukit Bandaraya, part of the affluent Bangsar suburb in Kuala Lumpur, are protesting against a new residential development that involves closing a retention pond. The 0.9-acre pond, which is next to one of the city’s last green lungs, Federal Hill, has been crucial in mitigating the effects of floods and landslides in the area.

Charles Tan, president of the Residents Association of Bukit Bandaraya, said that the retention pond, which was built in the 1970s, is crucial in preventing flash floods in the residential area further down the hill by retaining excess rainwater. 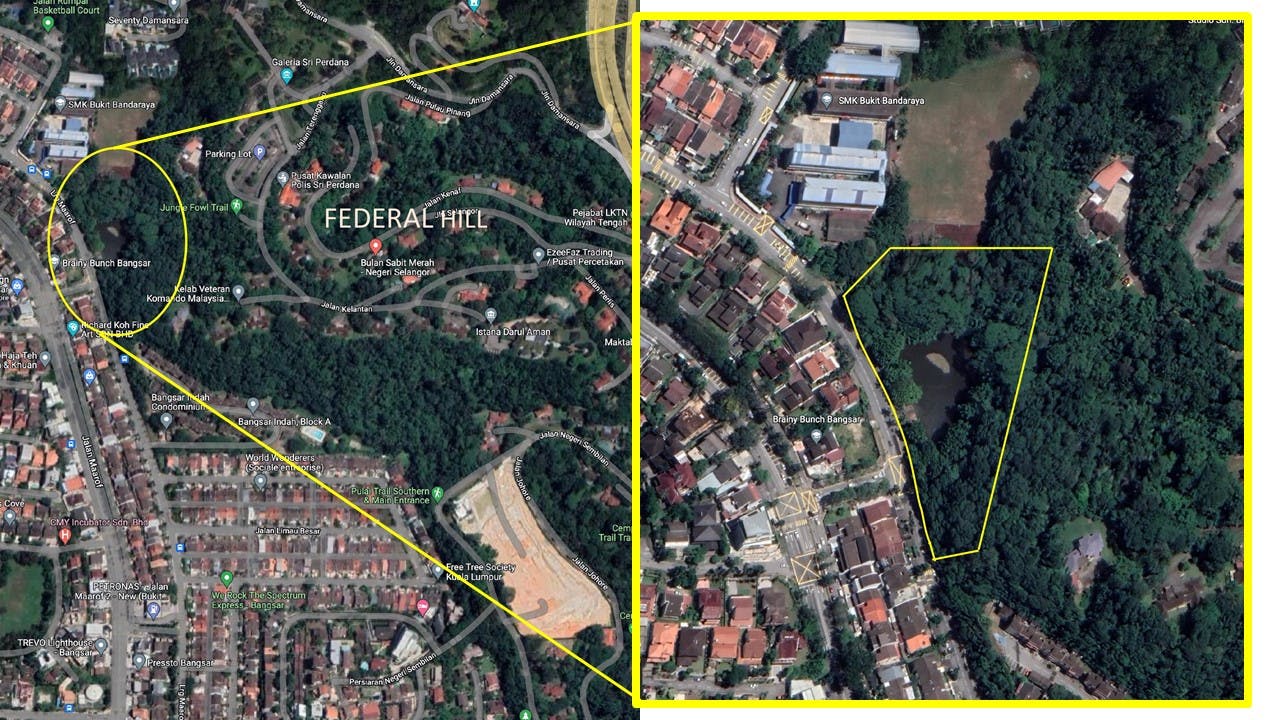 The luxury apartments are proposed to be developed on the edge of Federal Hill (left). Current plans include covering up a crucial retention pond (right) that prevents flooding in residential areas south of the pond. Image: Google Maps via Residents Association of Bukit Bandaraya

“We’re already seeing the current retention design starting to break down because the rains have become heavier and more frequent. We know that with climate change, rainfall has been increasing. And every time you put in a new development, you have rainwater runoff,” Tan told reporters at a media briefing last Friday.

Less than a year ago, heavy rains lead to landslides and floodings in the area that affected thousands of residents. 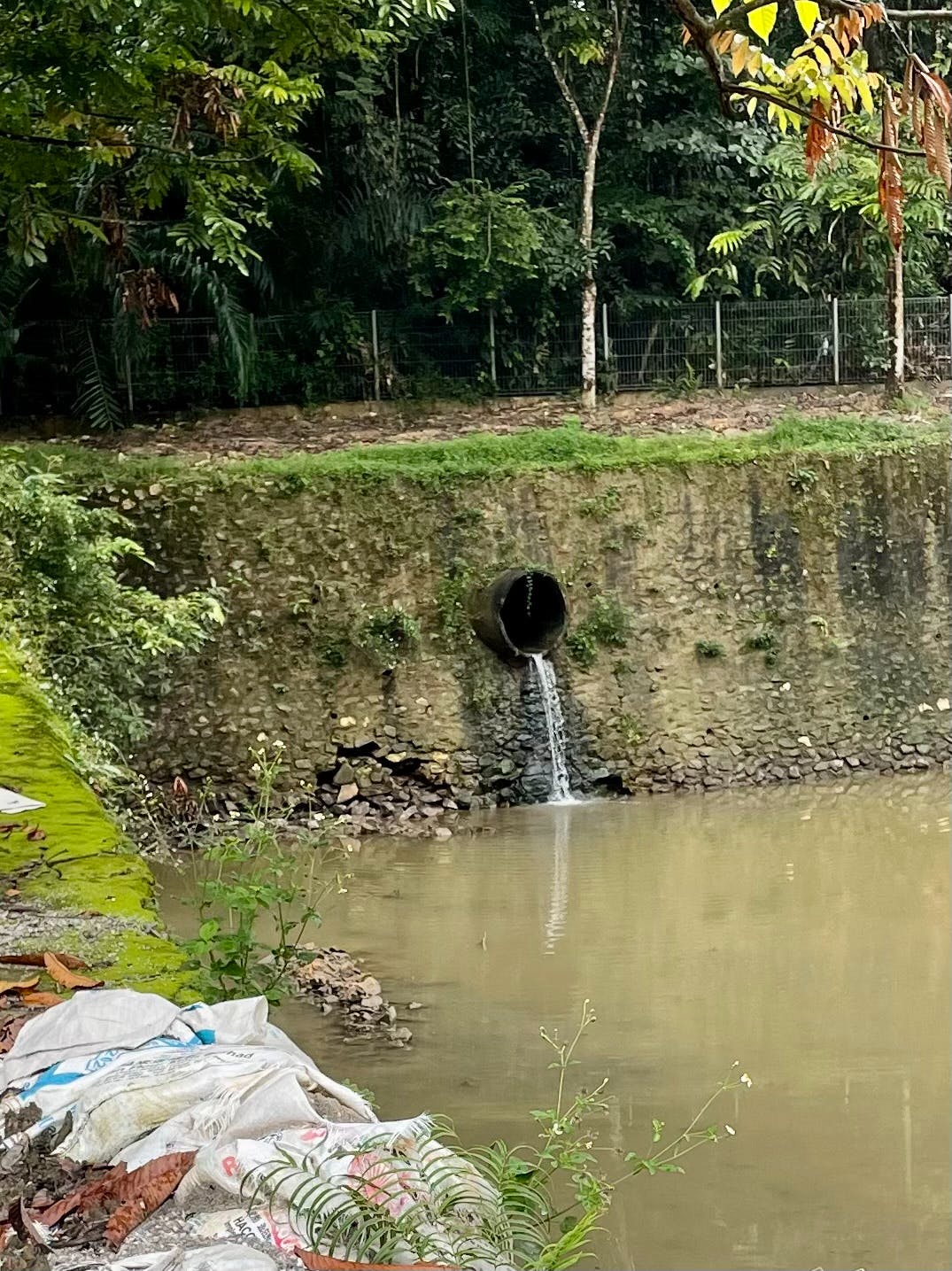 The Kuala Lumpur City Council (DBKL) had desilted the retention pond following floods in late 2021, but damaged bricks can still be seen near the main inflowing pipe. Image: Samantha Ho

It did not help that the retention pond had been poorly maintained at that point, being heavily silted and clogged with dead leaves and rubbish. The Kuala Lumpur City Council (DBKL) has since desilted the pond and cleared the primary water outlet, allowing water to pass into a large monsoon drain beyond the pond.

Details of the proposed development are scant, but a check with One Stop Centre Portal of the Housing and Development Ministry shows that it has been conditionally approved by the authorities on April 18, 2022. The application for the development had been filed by local developer Sri Haneco, which plans to construct the luxury apartments on two plots of land totalling 2.75 acres in size. The retention pond sits on one of those plots.

In a media statement, the Bukit Bandaraya Residents Association said that the development contravenes Kuala Lumpur City Plan 2020, which designates the area for use as a retention pond and not for residential development.

The statement said, “The federal territories minister should investigate how such sale of land including a retention pond could have taken place and take appropriate action if any procedures were not followed.” The association, which has not been made privy to any impact assessments for the proposed development, also called on the Malaysian Anti-corruption Commission to investigate the issue. 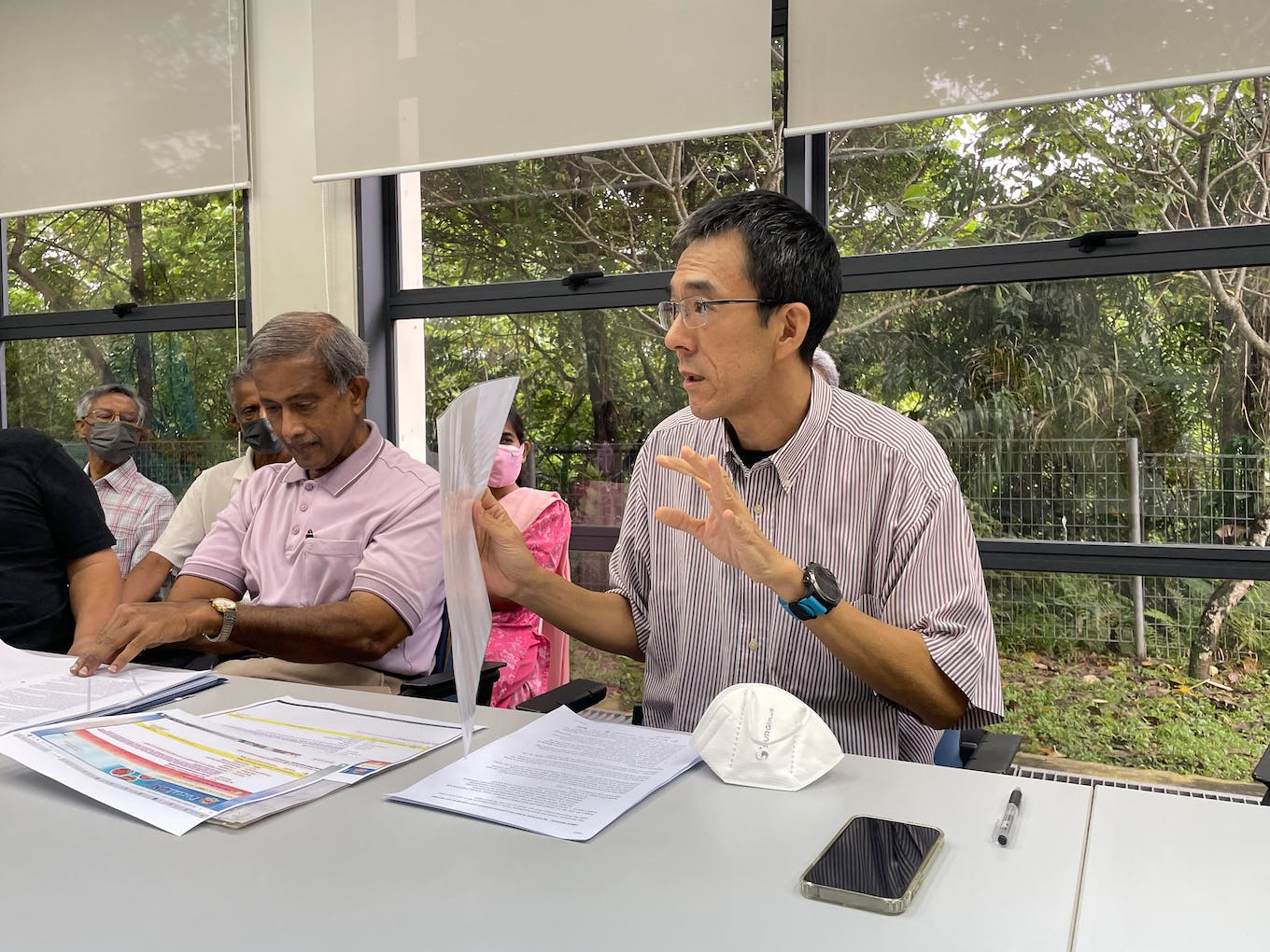 Tan and other residents said that they were not consulted regarding the proposed development, even though local media reported that DBKL had engaged with the local community.

Instead, they were only made aware of the proposed development less than two weeks ago when one resident checked the One Stop Centre Portal, which lists property development applications nationwide, and a local news portal ran an article on the approval soon after.

We are not against development but it must be sustainable.

The proposed development in Bukit Bandaraya is not the first contested development on and around Federal Hill. Work for another 32-storey condominium on Jalan Abdullah at the bottom of the hill, which could disrupt an underground waterway, began in May despite protests by locals. Residents of 10 houses along the same road had previously lodged reports with DBKL against private developer Bangsar Rising Sdn Bhd. Local news outlets reported residents saying that there had been no investigations carried out by authorities following the complaint.

Residents have also protested further development of Federal Hill by listed property developer S P Setia, which secured more than 51 acres of leasehold land there via a land swap with the government. The group has plans to develop the land as a “sustainable green development comprising office, retail and residential components”. 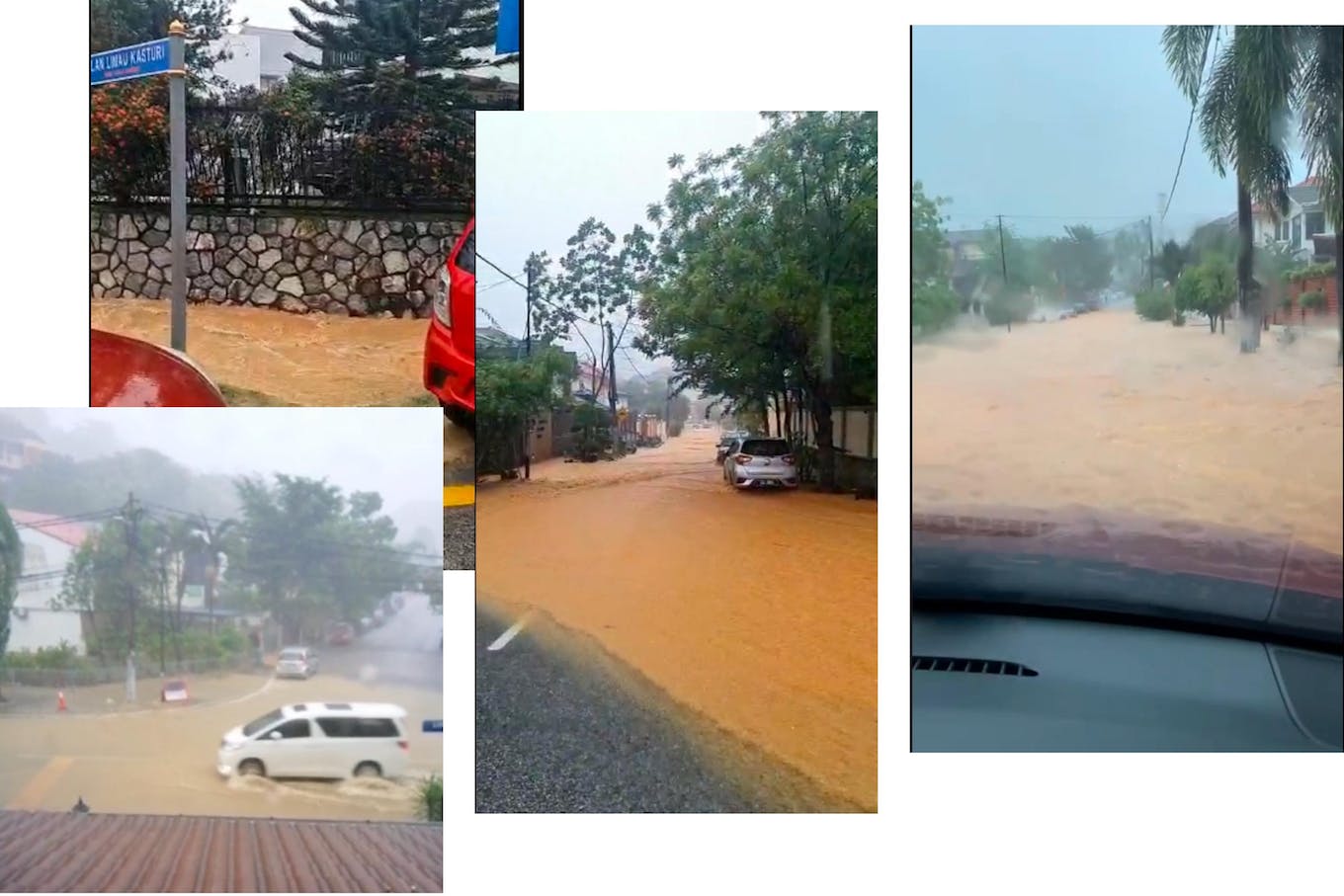 Another development occurring on the hill is the construction of an official residence for the Johor royal family, as indicated by the project signboard seen by Eco-Business at the site.

“We request that the Federal Territories minister as well as the ministry commit to protecting the entire Federal Hill, because these small bits and pieces that are being carved out…will raise potential issues for residents, both in terms of flooding and landslides, which we are already seeing now,” Tan said. 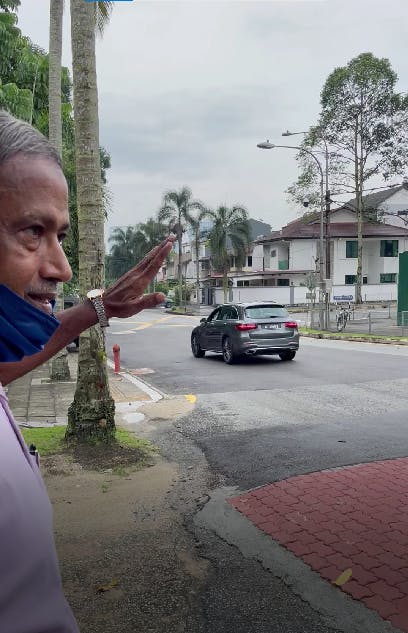 Datuk M. Ali, adviser to the Residents Association of Bukit Bandaraya, indicating the portion road in front of the rentention pond that is regularly damaged by overflowing rainwater and floods. Image: Samantha Ho

In a similar case of Kuala Lumpur residents protesting a hillside development, the residents of Taman Tun Dr Ismail (TTDI) took DBKL to court in order to protect Tanah Rimba Kiara, a popular hill with hikers and nature lovers. The group successfully won the case at the Court of Appeal in January 2021, although the city council has appealed this decision. They are also filing for judicial review against DBKL regarding the Kuala Lumpur City Plan 2020, arguing that the plan is flawed as it did not involve public consultation, said Hafiz Abu Bakar, the Chairman of the TTDI Residents Association.

The residents of Bukit Bandaraya have considered pursuing legal action in a similar manner if their current concerns are not addressed. “We are still talking to lawyers but we have already started giving serious thought to that. Tanah Rimbah Kiara is a very clear example,” said adviser to the Residents Association of Bukit Bandaraya, Datuk M. Ali, adding that the case has “set a precedent for all communities in Malaysia” to defend their land.

He added, “We are not against development, but it must be sustainable.”