Researchers are also warning that the use of manufactured snow at the Beijing Games next month could cause water strain and damage to nearby ecosystems.

Scientists are warning of injuries and environmental damage from the use of manufactured snow in the upcoming Winter Olympics in Beijing.

Snow made from machines makes for a harder and grittier surface that could increase the speed of skiers and provide less cushion when they fall, said scientists in a report by the Sport Ecology Group at Loughborough University in England and US environment group Protect Our Winters.

The Beijing Games, which starts next Friday in arid regions in and around China’s capital city, will be the first to exclusively rely on artificial snow.

Athletes interviewed for the report warned of bad experience with artificial snow structures like snowpipes – steep embankments that freestyle skiers launch from to perform stunts. 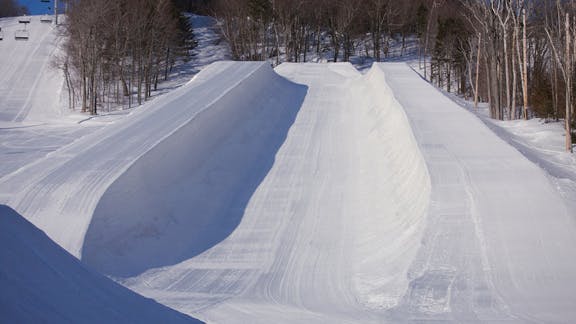 A snowpipe for events such as freestyle skiing. Image: Wikimedia Commons/ XK8ER.

“The walls of the pipe is solid, vertical ice and the pipe floor is solid ice. This is dangerous for athletes,” she said.

The report also warned of water scarcity for Beijing over the estimated 49 million gallons of water required to make 1.2 million cubic metres of snow. Competition areas for the Games span 800,000 square metres, and events like freestyle skiing and snowboarding require at least a metre of packed snow.

Water has already been in short supply for the city, due to pollution and depleting natural underground reservoirs. Beijing has been diverting water from rivers in the south of the country to top up its water needs.

The report said chemicals used to keep artificial snow frozen for longer could also damage vegetation and biodiversity. It pointed to one of the ski sites being next to Songshan National Nature Reserve, a 4,600-hectare protected forest area.

“The 2022 Winter Olympics will, no doubt, be an awesome spectacle – watched and enjoyed by millions worldwide. But they should also provoke a debate about the future of snowsports, and the limits of engineering artificial natural environments,” the report said. “Slippery slopes lie ahead.”

It called for greater scrutiny of sports events’ sustainability credentials, as well as assessments into the effects of using artificial snow on the environment, economy and athletes’ welfare.

Officials in Beijing said they have developed advanced weather forecasting tools to make sure events can be held in favourable conditions. The Beijing government has also expressed deep displeasure at a diplomatic boycott by the United States, announced in December last year. The move is seen as a major geopolitical snub that comes amid heightened tensions between the two major powers.

In response to critics, China has said it will run a “green” Winter Olympics, by using renewable energy and having 85 per cent of all vehicles powered by electricity or hydrogen fuel. It has re-used some competition venues from the 2008 Beijing Summer Games to minimise construction and planted forests to offset emissions.

Lower snowfall and higher temperatures may limit the number of venues available for winter sports, and make it less accessible for participants, the report said.

It pointed to research showing how several major winter sports venues across Europe and America would be at risk by 2050, even if global temperature rise is kept to 2 degrees Celcius, under a “RCP 2.6” scenario.

RCP is short for representative concentration pathway. It is used by scientists to model climate change and build scenarios about its impact. RCP 2.6 is one of the pathways adopted by the IPCC, and it describes a climate future that requires carbon dioxide emissions to start declining by 2020 and go to zero by 2100. 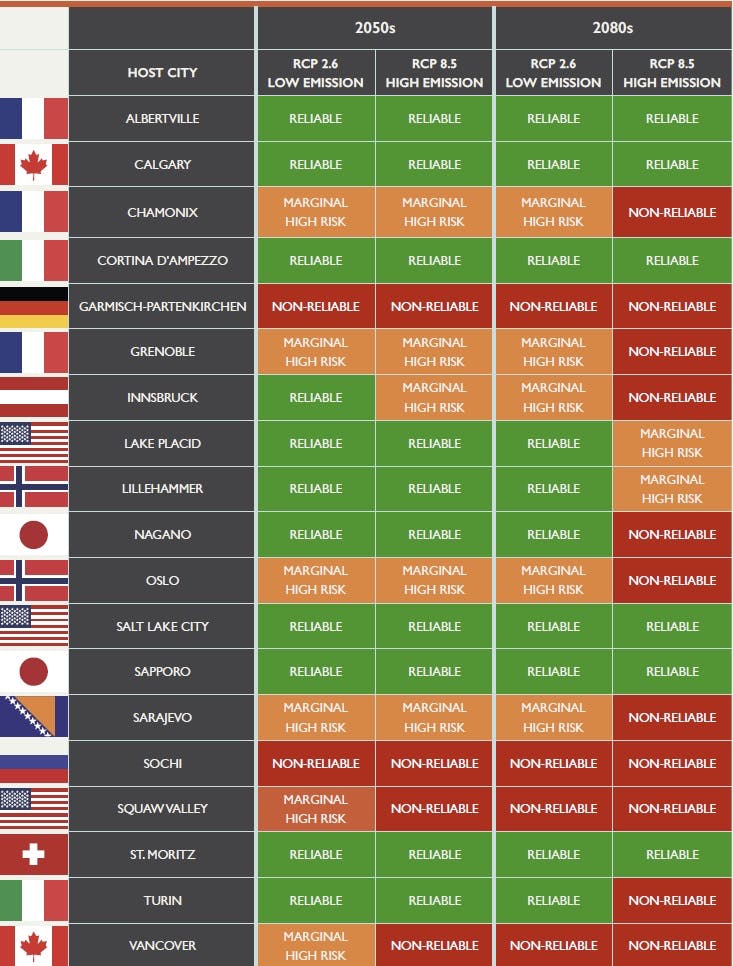 Major winter sports venues that may be at risk due to climate change. An “RCP 2.6” scenario correspondents to an up to 2 degrees Celcius rise in global temperature, while “RCP 8.5” corresponds to an increase of up to 5 degrees Celcius by the end of the century. Image: Sport Ecology Group.

Already, past iterations of the Winter Olympics Games have been using an increasing proportion of artificial snow for their venues. At the 2014 Sochi games in Russia, 80 per cent of the snow was man-made; the figure rose to 90 per cent at the 2018 Pyeongchang games in South Korea.

A recent study also found that of all 21 cities to have hosted a Winter Olympics, only Sapporo in northern Japan would be able to host a game again at the end of the century due to climate change.

“The weather and snow are far less consistent now than they were at the start of my career,” Lesley McKenna, a former professional snowboarder from the United Kingdom who started competing in the 1990s, wrote in the report.

She warned that the lack of good training grounds could mean “less accessibility and opportunities for stars of the future; less security in the industry and culture that supports snowsports”.

“Education and action must be undertaken by winter sport stakeholders now if the efforts to highlight and counteract the fast retreat of snow, ice and traditional winter conditions are to garner success,” the report said.