The European Union is planning to ban palm oil for biodiesel, citing environmental concerns. But the ban does not consider the impact it would have on the livelihoods of millions of smallholder farmers in Indonesia and Malaysia, the influential businessman has said.

Europe’s proposed ban on palm oil for biofuels is unwarranted, and threatens the livelihoods of millions of smallholder farmers in Indonesia and Malaysia, one of the biggest names in Southeast Asia’s agribusiness sector said yesterday. 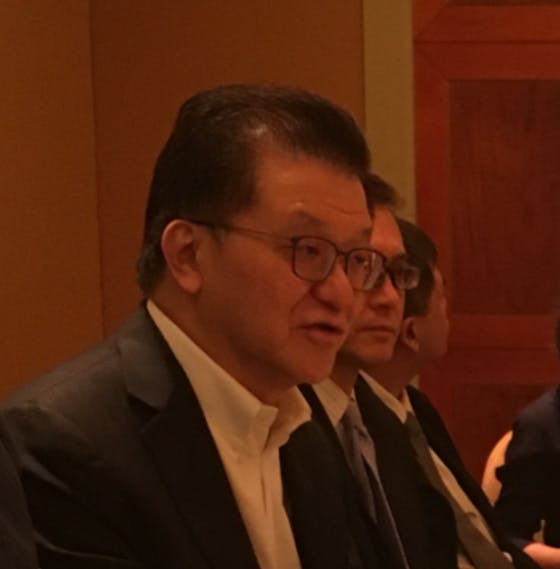 Speaking to reporters at a media briefing on Tuesday, Franky Oesman Widjaja, head of agribusiness and consumer food for Jakarta-headquartered conglomerate Sinar Mas, suggested that Europe would be unwise to ban oil palm on environmental grounds, as it is the world’s highest-yielding vegetable oil and requires less land to cultivate than other oils such as soy bean and rapeseed.

The European parliament voted last April to stop the sale of biofuels made from palm oil by 2020.

The European Union has reasoned that the widely-used commodity would derail Europe’s ambitions to green its transport sector if used as biodiesel, as palm oil is responsible for deforestation in Indonesia and Malaysia, the world’s two biggest producers.

“At the end of the day, the most productive oil in the world is still palm oil. They are shooting themselves in the foot [if they ban it],” said Widjaja, whose company owns palm oil firm Golden Agri-Resources (GAR) and paper giant Asia Pulp and Paper (APP).

He suggested that the EU would be breaking World Trade Organisation (WTO) rules if the ban was introduced. “We hope that the [European] stakeholders will respect the WTO, because it [the ban] really is without basis,” he said.

The Indonesian and Malaysian governments have said they will file a complaint to the WTO if the ban goes ahead. The European Commission is currently debating whether and how the ban will be implemented.

Widjaja called on the Indonesian government to better communicate with Europe on the issue. “We would like to encourage more communication rather than imposing tariffs or non-tarrif barriers [on palm oil]. This kind of thing is not very healthy,” he said.

The ban ignores the farmers who have climbed out of poverty as a result of the oil palm trade, Widjaja added.

The EU is the second-largest palm oil export market for both Malaysia and Indonesia.

Talk of the ban has yet to have any impact on palm oil demand, which is expected to be “stable” this year, Widjaja noted. However, the ban could have an impact on industry sentiment, he admitted.

“If somebody bans [palm oil] and they publish lousy things, the impact will not be good. But I think we need to look at the rationale behind it [a ban] and the objectives behind it,” he said.

Malaysia has called the EU’s plan discriminatory and “crop apartheid,” while palm oil lobbyists say the move is a conspiracy to undermine palm oil in favour of vegetable oils produced in the West, such as rapeseed.

Widjaja said that to tackle the palm oil’s poor reputation, the industry needs to focus on educating smallholders about sustainable farming practices.

Smallholders produce 40 per cent of the US$66 billion industry’s oil, but are held back by what Widjaja calls “very old” farming practices. Among them is slash-and-burn forestry, a cheap and easy way to clear land that is responsible for the region’s annual outbreaks of haze air pollution.

“Just like in any society, there are always some good and some bad guys in every industry,” said Widjaja.

Now, many large palm oil companies such as GAR are “very serious” about sustainability, he said, adding: “taking care of the environment is in our DNA.” But smallholders needed educating about its merits, he said.

Widjaja comments came as GAR announced its financial results and a key sustainability milestone: 100 per cent traceability from the plantation to the mills that it owns. This helps the company to more easily identify and manage problems in the supply chain. Currently, 39 per cent of GAR’s palm oil is fully traceable.

As Agus Purnomo, GAR’s managing director for sustainability and strategic stakeholder engagement, put it: “The more we gather the full picture, the more confidence we can grow among our buyers.”

GAR introduced a zero-deforestation policy in 2011 following a hardhitting pressure campaign from environmental group Greenpeace, which targeted one of GAR’s corporate buyers, Nestle.

GAR’s sister company APP pledged to stop clearing natural forests in 2013, but its policy has recently come under scrutiny from non-governmental organisations for not living up to its commitments.