Recently leaked emails between fossil fuels majors and PR firms cast doubt over the sincerity of Big Oil decarbonisation claims. PR firms have been urged to avoid fossil fuel clients, but some say it is better to counsel than cancel Big Oil.

Public relations firms should avoid working for fossil fuels companies that have made insincere decarbonisation pledges that do not match their business plans, an environmental campaigner has said.

Speaking on a webinar on Tuesday, Duncan Meisel, founder of non-profit Clean Creatives, said PR firms should “draw the line” with oil and gas majors that have made net-zero emissions targets but plan to ramp up fossil fuel production.

Meisel referred to leaked emails from a congressional hearing into climate disinformation in the United States that cast doubt over the credibility of energy majors’ net-zero emissions targets.

Meisel said the emails, which were shared in social media last week (22 September), suggested that Anglo-Dutch energy major Shell does not genuinely intend to meet its pledge to achieve net-zero emissions by 2050 – so PR agencies should not communicate on their behalf.

According to emailed conversations between fossil fuels firms and their agency partners in 2020, Shell said: “Please do not give the impression that Shell is willing to reduce carbon dioxide emissions to levels that do not make business sense.”

Companies that are announcing to investors and the public that they want to destroy the one planet that supports life do not deserve representation. 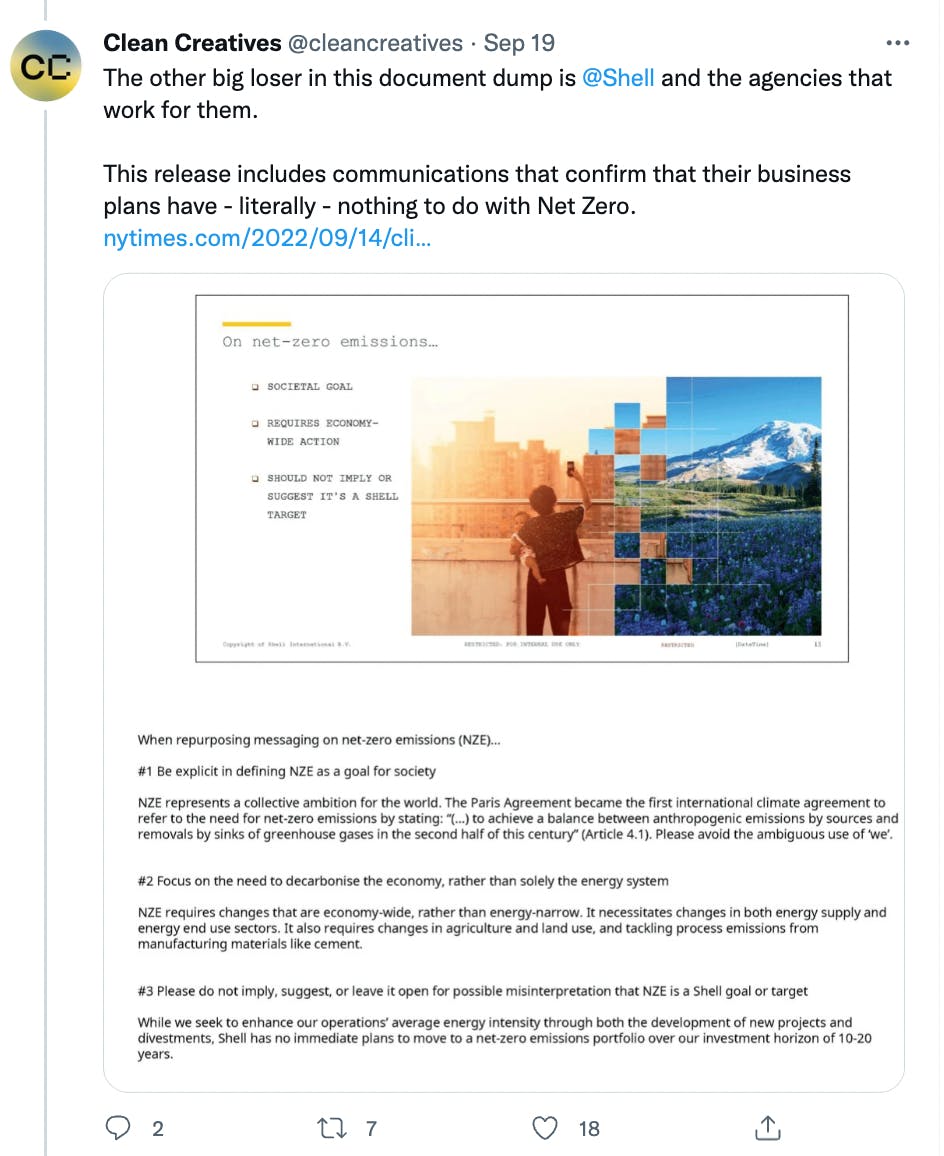 A presentation slide from Shell that advises PR firms on messaging around its net-zero target [click to enlarge]. Image: Clean Creatives on Twitter

“Shell has no immediate plans to move to a net-zero emissions portfolio over our investment horizon of 10-20 years,” the company stated in a presentation slide for PR agencies.

The emails also suggested that an advertising campaign by ExxonMobil to promote using algae as a clean alternative to fossil fuel was misleading, as the oil major told its PR agency that the technology was not yet viable at scale.

Meisel said he supported PR firms that worked with energy majors that had genuine plans to decarbonise, citing Danish power company Ørsted, the first energy major to make a science-based decarbonisation target that is aligned with the Paris Agreement on climate change.

“It’s not that we never want you [PR agencies] to work with Shell,” said Meisel at the event organised by the Public Relations and Communications Association. “We think PR companies should engage when Shell has a net-zero plan for today – not two decades in the future.”

Shell referred Eco-Business to a response it made after the documents were released by the US Congressional Committee: “Of the nearly half-million pages provided to the Committee, the small handful they chose to highlight are evidence of Shell’s extensive efforts to set aggressive targets, evolve its portfolio and meaningfully participate in the ongoing energy transition.

“Within that pursuit are challenging internal and external discussions that signal Shell’s intent to form partnerships and share pathways we deem critical to becoming a net-zero energy business and meet the goals of the Paris Agreement,” the company said.

Clean Creatives has been campaigning to pressure PR firms to “work for climate action, not against it” by shunning fossl fuels clients since 2020. Limiting the access fossil fuels companies have to creative talent is the most effective way to influence their business plans, said Meisel.

Rachel Cheang, divestment organiser for Students for a Fossil Free Future, a movement that opposes fossil fuel firms’ involvement in tertiary education, said the PR industry needed to accept more responsibility for its role supporting companies that have lobbied against climate action.

“The PR industry has historically downplayed the severity of climate change, promoted industry-favoured solutions as preferred courses of action, even promoted climate action and denial,” she said.

The industry’s influence in climate policies and politics has long been overlooked, she said. “Policies and regulations do not exist in a vacuum. They reflect public attitudes and beliefs that the PR industry has huge power in shaping.”

Including fossil fuels firms in the climate conversation

Anish Daryani, founder and director of advertising agency M&C Saatchi Indonesia, argued that shunning fossil fuel contracts would not help to fight climate change, because communications firms are “at the bottom of the value chain” and have no real impact on upstream oil and gas production.

“As professionals, we owe it to our clients to solve [communication] problems. [Ad agencies avoiding fossil fuels clients] is like saying a doctor shouldn’t treat a patient just because they work in the fossil fuel industry,” he said.

Daryani said fossil fuels majors should be “included” by the communications industry, and help them transition their businesses to clean energy.

“There’s a big opportunity in making them [oil and gas majors] a part of the solution,” he said.

Meisel said the best way for agencies to wield their influence is to “walk away” from Big Oil briefs until these companies come up with a plan “that’s not going to support the destruction of tens of billions of lives”.

Meisel said that it was particularly important for PR and ad firms to shun dirty energy brands in Asia, where there is growing capital flowing into the region to support oil, gas and coal development and rising fossil fuel consumption.

He said agencies make decisions about which clients they should and should not pitch for every day, and fossil fuels brands should be blacklisted because of their outsized impact on the environment.

Clean Creatives’ campaign pledge has been signed by 400 agencies globally. In Southeast Asia, one PR firm has taken the pledge.

The only agency that has responded is Singapore-headquartered PR network Redhill. The agency, which launched a sustainability practice last year and recently acquired a sustainability production company, told Eco-Business: “It’s something we have been looking at closely and we are having important internal discussions about it.”